REPLY & QUOTE
whiterook (Glenn Kaucher) said
Where can I find ww1 vehicles (german,british,u.s.a.) and also figures to go with them.

WE won't come back
till its over, over there.
To the men still on patrol

REPLY & QUOTE
Sabot said
Tauro also makes the German A7V and an Italian Fiat 3000 copy of the Ft-17. Emhar is the only game in town for the giant Mark IV "Male" and "Female". They also do a couple of WW1 British tanks like the Whippet and Tadpole. RPM does a nice Ft-17 tank in various boxing including USA and German markings (#35060, 35061, 35062). Each boxing may vary in armament (cannon vs. machine gun) and markings (French, German USA).

REPLY & QUOTE
brno465 said
Emhar's 1/35th stuff isn't too bad. The Whippet is a nice kit with no real probs, the Mk1 Male needs a bit of work with some parts that don't quite fit, and the Female is ok except for the gun mounts in the sponsons which are simplified and don't fit all that well. The tracks are fairly simple in detail and are in several parts each, so you have a few joins you have to try to hide - this is made worse by the type of vinyl which does not glue easily.
The Whippet is about the easiest to build, but they all make nice models with a bit of care.

REPLY & QUOTE
I love the smell of plastic and glue in the morning.
Grant

REPLY & QUOTE
M4Nut (Eric McClure) said
No, no, no Sabot!!!!! Are you trying to drive whiterook mad by telling him about the Tauro A7V. I don't think I've ever heard anyone getting past the undercarrage and tracks on that thing. I've talked with a few real good armor modelers who basically said that once they got to trying to build the bogee system they gave it up.
Eric

REPLY & QUOTE
"There's never enough time to do all the nothing you want."
Calvin and Hobbes 1990

No, no, no Sabot!!!!! Are you trying to drive whiterook mad by telling him about the Tauro A7V. I don't think I've ever heard anyone getting past the undercarrage and tracks on that thing. I've talked with a few real good armor modelers who basically said that once they got to trying to build the bogee system they gave it up.
Eric

hey dude, if you are afraid of the old tauro kit keep it to yourselfi for one am trying to get my hands on one to go with my MK4's. i feel that if you keep at a kit you eventually end up with a gem on your desk. i think Whiterock can decide for himself if he's ready to tackle a bear or not. White rock good luck with your search, i'm still looking for the WW1 stuff myself, if you stick with it thought you'll have a nice collection, and btw i was actually impressed with the old EHMAR kits good luck stug

I bought and started one in Germany. Never got past the single link tracks with little tiny pins. Many parts were lost in my move back to and through the states and I found one on eBay for $10 a few years ago. Haven't gotten any farther with the kit. On the plus side, there is now a build up review of the tank from the old Military Modeler magazine. It suggests to just build the bottom run of tracks and not go completely around since you can't see them any way. Probably other online build ups on the 'net.

The Fiat 3000 also has tight tracks and you will have to bring the front sprocket inward (towards the rear). If not, then the tracks will cause the rear sprocket to break off. By design, the rear sprocket can't be adjust inward since it sits outside of the rear of the hull. This is a tricky kit and would suggest the Tauro kits for the experienced modeler. And did I say the tracks suck?

REPLY & QUOTE
AJLaFleche (Al LaFleche) said
The A7V's tracks cannot be assembled with the kit pins. But they can be assembled quickly and easily. Get a bunch of standard paper staples. Separate them and flatten out one "leg" so they look like an "L" in stead of a "|_|". Use these to assemble the links. The upright part has a nice flat, non-skin penetrating surface. Trim off the excess and, presto! A7V tracks.

Of course, you need to toss the suspension springs and settle for a non-working suspension/running gear set up. :-) 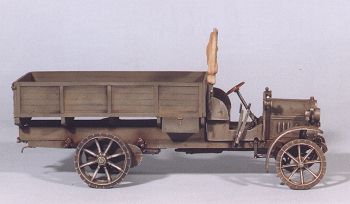 REPLY & QUOTE
stugiiif (Steve Manchur) said
hey, whiterock check this site www.greatmodels.com, and look under commander series models, i found st.chamond, its pricey but looks nice. and if you do decide to tackle it i warn experience with resin as its all resin. good luck stug

REPLY & QUOTE
M4Nut (Eric McClure) said
Sorry if I ruffled some feathers. I was just trying to add some humor to the post. I would love to see someone finish the Tauro kit without resorting to a diorama of one in mud.
Eric

REPLY & QUOTE
"There's never enough time to do all the nothing you want."
Calvin and Hobbes 1990

REPLY & QUOTE
blaster76 (Steve Joyce) said
Glad I'm not the only one...that A7V was a mess

REPLY & QUOTE
zululand66 (Georg Eyerman) said
Hi All,
I haven't just built one A7V, I've done two! Anyway, the tracks and suspension was nasty. Also, its made of a vinyl-like plastic. Anyway, once complete (which means TONS of work) it turns out OK. Seams are a pain since both sides of most of the joints have rivets on both sides of the seam. If you want to tackle this beast, good luck!
Regards,
Georg

REPLY & QUOTE
"Blade with whom I have lived, blade with whom I now die, serve right and justice one last time. Seek one last heart of evil. Still one last life of pain. Cut well old friend, and then farewell."