With the approach of D-Day anniversary, Im doing a research for a project.

REME
Has the 20th Beach Recovery Section, with about 50 Sherman BARV  Beach Armoured Recovery Vehicles, that were attached to the different Beach Group.

BEACH GROUP
Several groups, for example No. 5 Beach Group for Queen sector of Sword, where the 13/18 RH disembark in support of the 3rd Inf. Div., composed of men and vehicles of several origins  Navy, Ordnance, Engineers, Medical, MP and so on, with the mission to organize the beach.

Now my doubt:
In some foruns is refered that each 13/18 RH sqn have a BARV attached, others refer an ARV and others ARV but refering the LCT 610 photos with a BARV, BALACLAVA and CAROLE.
Photos of IWM, also found at WikiMedia (sometimes with more than one entry, with diferent though similar captions), mentioned that the vehicles and men belong to 13th/18th RH, but Ive read that some men and the GPA are from other units and belong to the Beach Group, because they used its insignia (pale blue circle with a red anchor) and others are from units belonging to 3ID.

I know that some IWM captions are not 100% accurate and WikiMedia, being done by everybody, can be even less accurate.
So, that BARV, at LCT 610, can be one of the 20th Beach Recovery Section attached to the Beach Group and there are normal ARVs attached to the 13th/18th RH ?
That seems more logic because:
- the 13th/18th RH will move inland and the BARVs will still be needed and are seen on the beaches for a long period of time;
- the BARV has limitations as a ARV because ut havent winch
- also, I havent find any mention to BARV attached to armd regts unless in comments to photos of that serie.
Or, the BARVs were attached for D-Day and then transferred and replaced by ARVs ? I think that doesnt make sense that they continued moving inland with the 13/18 RH, or staying in the beach still attached to the 13/18 RH.

REPLY & QUOTE
JohnTapsell (John Tapsell) said
The first comment I'd make is that 13/18 Hussars (in fact any British armoured or infantry regiment at this time) did not have any REME vehicles 'attached'.

The three ARVs operated by 13/18 Hussars were issued to the regiment and operated by Regimental Fitters, not REME personnel.

After its formation during WWII, REME initially only provided Brigade Workshops and higher echelon support. REME did not take on direct responsibility for regimental maintenance until until the late 40s or even early 50s - can't remember the date offhand (it was always planned as Phase 2 of their creation).

The three 13/18 Hussar ARVs were Sherman III ARVs, not BARVs. There is sometimes confusion because of the large square wading trunks fitted around the turret ring of the ARVs on D-Day.

The ARVs carried regimental markings and 27th Armoured Brigade formation badges - if they were REME vehicles they would have carried REME Arm of Service flashes and a different Arm of Service code number. (13/18 Hussars carried '51' on a red square)

The specific ARV you mention on LCT 610 was assigned to C Squadron and carried the name 'Cymru am Byth' (Wales Forever) - all C Squadron vehicles had names beginning with 'C'.

REPLY & QUOTE
BootsDMS (Brian Stoddart) said
I'm sorry but I think this is wrong; I am pretty sure that by 1944 the REME were firmly established within Armoured Regiments as a Light Aid Detachment, being equipped with, amongst other items, a number of ARVs.

The BARV was designed for a specific task that of Beach Recovery, so it just doesn't make sense for any such vehicle to be on the strength of an Armoured Regiment's LAD.

For the actual disembarkment, some BARVs may well have been assigned to a specific unit in case of vehicles floundering, but even if aboard the same vessel (which would make sense) it doesn't mean they were an integral part of the RAC Regiment.

As always in these discussion, more than happy to be proved wrong!

My research was done about 10-15 years ago but Wikipedia confirms the transfer timeline and thus my comments. 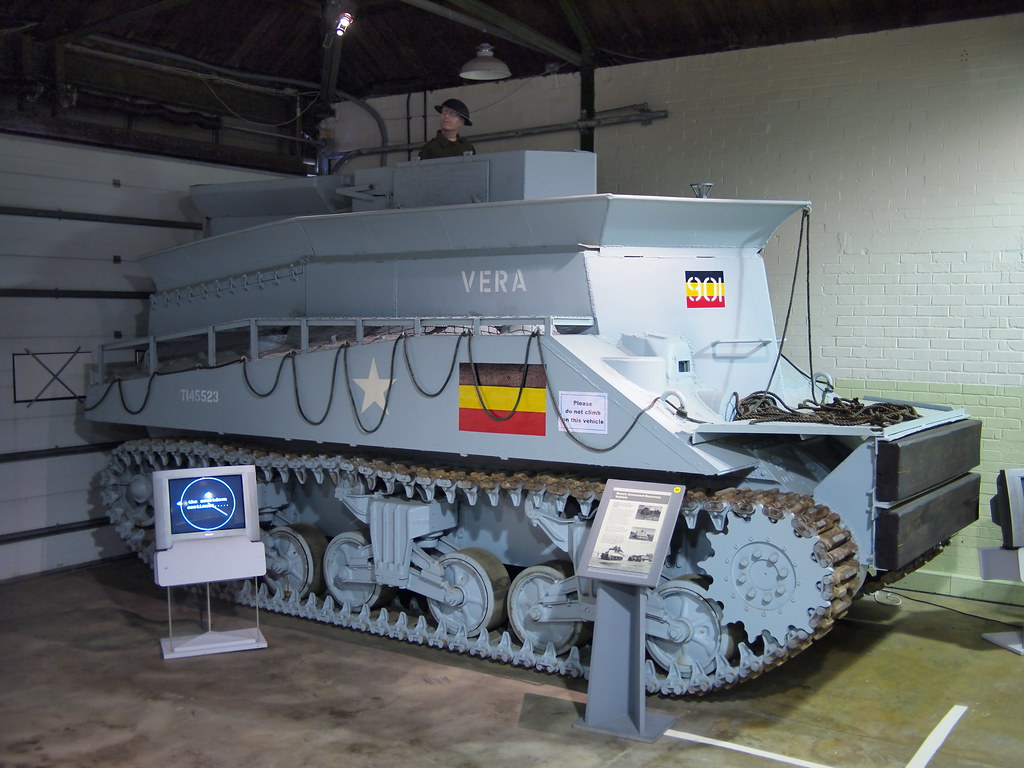 The turretless ARVs had wading trunks for the air intakes, exhaust and around the hole where the turret would be on a gun tank. Looked mostly like a turretless tank without the wading trunks.

ARV in the bakground to the left. Drivers and co-drivers hatches are visible in front of the wading trunk

Note the '51' Arm of Service marking visible on the rear of the ARV. A REME vehicle would have had a three-colour AoS flash in REME colours and a different number (99 for an Armoured Brigade Workshop for example).

John, Brian and Robin thank you very much for yours comments.

Thanks again to all.

Note the '51' Arm of Service marking visible on the rear of the ARV. A REME vehicle would have had a three-colour AoS flash in REME colours and a different number (99 for an Armoured Brigade Workshop for example).

I don't think it would; a REME LAD was an integral part of an Armoured Corps regiment therefore the AOS sign would be the same as that of the parent regiment. At Brigade and above, "Yes" the REME colours would be present but not at Unit - ie Regt - level.

Of course, being a new addition to the British Army, the REME may well have been tempted (and even encouraged) to exert their identity and use their Corps colours where they could, but I don't think that was the case at an RAC Regt level.

Robin, thanks for the links. I'll try to get the dimensions from them and the photos I've found at IWM showing the vehicle.

I would only reiterate my point that REME did not take on responsibility for regimental maintenance until Phase 2 of the REME's formation after 1949, when the regiments gave up their independent maintenance responsibilities and those tasks were absorbed under the REME banner.

Prior to that, the maintenance teams at a regimental/battalion level were regimental personnel - probably trained at EME/REME schools, but still members of the regiment and not of REME.

The REME Charity website provides a good summary of the history of the Corps. It refers the 'Phase 1' and 'Phase 2' and explains the timeline and reasons behind it.

I would only reiterate my point that REME did not take on responsibility for regimental maintenance until Phase 2 of the REME's formation after 1949, when the regiments gave up their independent maintenance responsibilities and those tasks were absorbed under the REME banner.

Prior to that, the maintenance teams at a regimental/battalion level were regimental personnel - probably trained at EME/REME schools, but still members of the regiment and not of REME.

The REME Charity website provides a good summary of the history of the Corps. It refers the 'Phase 1' and 'Phase 2' and explains the timeline and reasons behind it.

Well, I suppose this all hinges on whether or not REME LADs were in existence (ie at Unit level) or not; and of course, who am I to gainsay an apparent REME website who should at least know their own history!

For the record, amongst the sources I stumbled across (not in any order) were:

a. The venerable Osprey Vanguard book "The Churchill Tank" from 1980; page 84 shows the Order of Battle (ORBAT) of a Churchill equipped regiment from 1944 NW Europe clearly showing a Light Aid Detachment REME.

c. "Flame Thrower" by Andrew Wilson - covering a Crocodile equipped regiment. Page 16 refers to a REME Captain within the unit. Of course, the evidence here may be a bit thin as at this juncture of the book the unit is being re-equipped with the then new tank, and one might deduce that a REME officer would be present for that stage, but later on, when in Normandy, again Wilson refers to "the Technical Adjutant and the REME Captain, Drysdale" (page 56). Such an officer, to my mind, would be the OC of the LAD.

d. Lastly, before I bore you all to death, Bill Close's memoir "Tank Commander" page 157 "..all the tanks were recovered next morning by our own REME Light Aid Detachment...".The unit concerned was 3 RTR.

Now, none of these may be seen perhaps as incontrovertible proof of the existence of LADs within units (though Bill Close's anecdote must be pretty much spot on I would think) so, in the interests of trying to put this to bed when, and if, this wretched pandemic ever allows us to resume something like a steady state, I'll get my backside up to Lyneham where the REME museum is now located and get digging!

PS Having speed-read "Flamethrower" as I knew I'd come across the above somewhere, I cannot help but recommend this book to any WW2 modeller; I usually major on Cold War models but am now hankering to build a Crocodile; like I need another modelling tangent(!)

I've found these two stories:
- From tractor to swimming tank
- Tanks for the Memories