REPLY & QUOTE
nheather (Nigel Heather) said
Was the rear machine gun on the Sdkfz part of the vehicle supply or was it simply the one owned by the squad that it was transporting. So if the squad was mounted and they needed it, they could attach there MG34/42 to the rear mount. Likewise, if the squad were dismounted, they would take the machine gun with them.

Or did the vehicles have a dedicated MG34/42 that could be set up on the rear mount?

REPLY & QUOTE
GeraldOwens (Gerald Owens) said
From what I have read, I understand that the rear antiaircraft mount on the SdKfz 251 halftrack used the squad machine gun, which was usually not fitted unless air attack was anticipated.

From what I have read, I understand that the rear antiaircraft mount on the SdKfz 251 halftrack used the squad machine gun, which was usually not fitted unless air attack was anticipated.

Makes sense to me. After all if the squad werent mounted there would be no one to man it any way.

REPLY & QUOTE
RLlockie (Robert Lockie) said
Assuming that you mean the SPW, PT 15-2-22 says that the 251/1 carried three MG and two MP when used by a light MG group. No mention of rifles (which the infantry squad would have had themselves) and for a heavy MG group it was three MG and three MP.

Interestingly the 251/2 mortar carrier had one MG but no armoured shield so the MG seems to have been mounted on the rear as the 8cm mortar faced forward.

Other variants illustrated are also described as having MG and MP but not rifles (even though they are illustrated stowed, so were carried), so It sounds to me as though the MG were actually part of the vehicle issue rather than the squads.

Interestingly the 251/2 mortar carrier had one MG but no armoured shield so the MG seems to have been mounted on the rear as the 8cm mortar faced forward.

This is true. Based on where the mortar mounts to the floor, it would be firing rounds up your spinal column if you were to try and use a mg from that position.

REPLY & QUOTE
Khouli (Roly) said
Without a shadow of a doubt, the rear mounted MG was allocated to the vehicle crew. Not as part of the equipment schedule necessarily, but to be signed out from the armory by the commander or a delegated crewman.

A practice still used today in the British Army for AFV of all types.

Stowage was provided for the MG and when not in use, this is where it would have been. It is important to remember that vehicles have to 'harbour' and a degree of local protection must be maintained at this time. Further, the vehicle crew could provide fire support for dismounted infantry if required.

REPLY & QUOTE
jrutman (jerry rutman) said
Rear MG was used by the squad and didn't stay with the track. In fact,it was seldom mounted at all. The Mortar carrier did not have the MG shield mounted on the rear. No German manual I have seen supports this or have I seen any photo confirmation of it either. The primary mission of the track was battlefield taxi for the infantry.
J 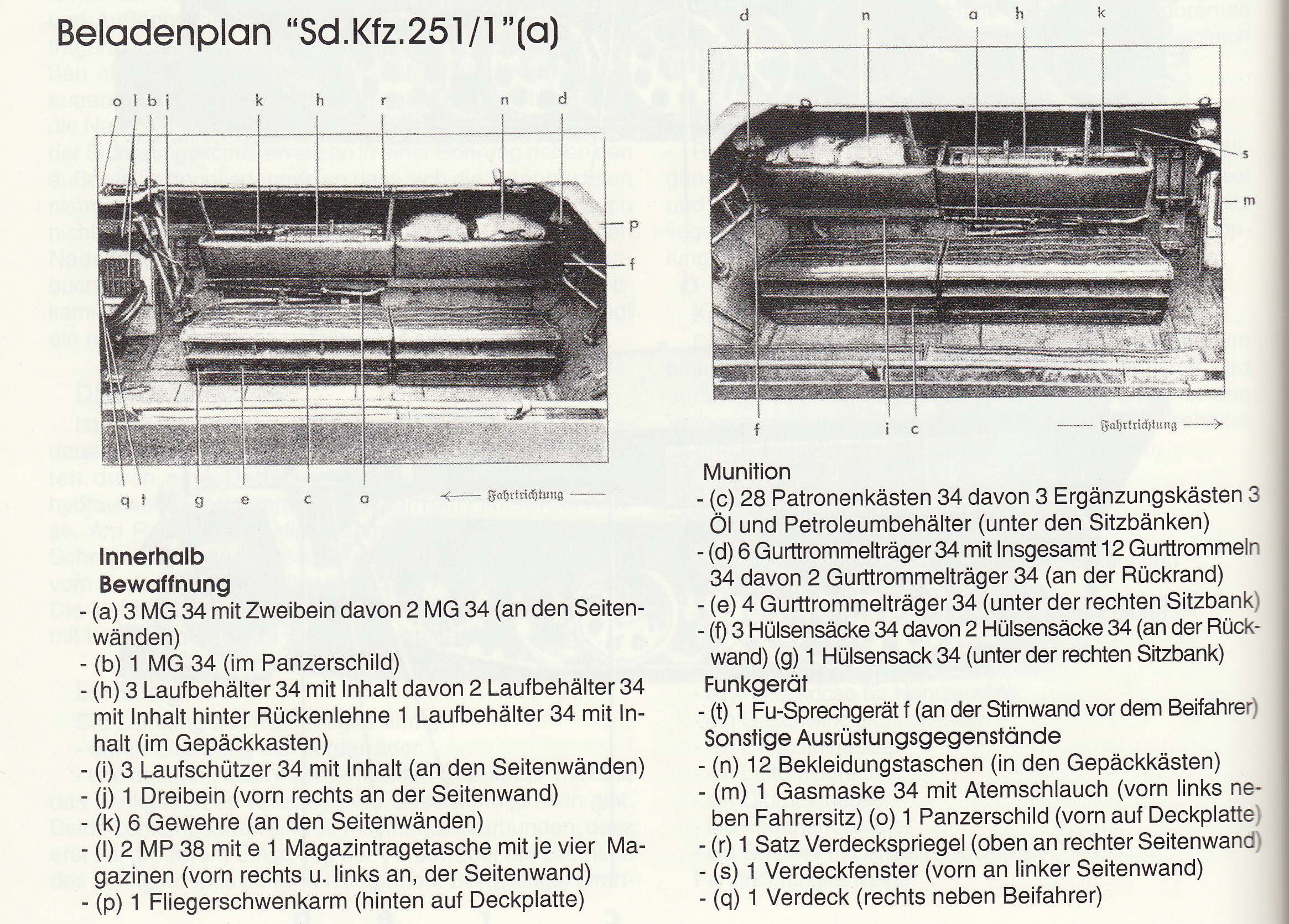 It shows 3 MG 34 GPMG(marked "a" and "b"), 2 stored on each side of the vehicle and 1 in the armored shield, 3 MG 34 spare barrel containers(h), various accessories(i,j,p) and ammunition containers(c,d,e,) and 3 bags for spent cartridges(f,g).
The Beladenplan also shows where 6 carbines are stored(k).

If we exclude from the above list the weaponry of the standard German squad: 1 GPMG,1 MP(NCO) and 6 carbines- there are still 2 GPMG unaccounted for:
One of them is for sure mounted in the armor shield(b).
The other one can only be used on the rear mounting(Fliegerschwenkarm: "p") as AA defense weapon.

Another clue is the quantity of bags for spent cartridges(Huelsensaecke)-they were only used in vehicles(their purpose was to collect used cartridges and prevent those falling to and rolling on the floor of the vehicle):
2 Huelsensaecke are located on the rear wall, under the Fliegerschwenkarm, plus 1 close to the MG in the armor shield.

I think the rear MG belonged to the vehicle.

It would be a pure speculation who operated it, but the most reasonable (to me) answer would be- either the MG assistant gunner from the carried squad, or the ammo carrier.

REPLY & QUOTE
Khouli (Roly) said
You are correct. Despite posts to the contrary, the rear MG mount housed an MG that belonged to the vehicle.

This was confirmed to me by an ambassador at the German Army Tank Museum in Munster Oertze in 1993!

REPLY & QUOTE
ayovtshev (Angel Yovtchev) said
I'm quite sure now it is the opposite, Roly!

I had a conversation-and argument- with Kalin(k_mero4), who is my Guru on German organisational charts/KStN's, and following this conversation I did an additional research in my sources.
It proved to me to be totally wrong in my opinion, posted yesterday...

The Beladeplan I posted yesterday is for a Sd.Kfz.251/1(a) and the (a) means the vehicle is carrying a 2 MG's Squad.

Such infantry squad accounts for all GPMG's in the Beladeplan and leaves only one MG for the vehicle-the one that was mounted on the armored shield above vehicles crew.

REPLY & QUOTE
Khouli (Roly) said
Well, I could be wrong!

What this demonstrates is that the vehicle configuration could have been either way.

The modeler could represent either version and probably be correct.