First I have glued the wall onto its place and filled out the small gaps all around in between the base plate and the wall part with Tamiya putty. The fit was not perfect but this also comes from the uneven foam I glued into the wall to provide stability. Anyhow I sanded it, I could not get a perfect fit. Anyway, the filling helped it. Once the putty was dry, I had to do some sanding and it also removed the paint on the very bottom row of bricks in the wall.

So the next step was to recover the paintwork with some light layer of acrylic paints (colors detailed in the previous post) avoiding mismatching shades. The final result became a little bit darker than the mid and top brick rows but it is a good point as the bottom rows would be darker anyway.
So it came to apply the vegetation to the base plate. To have a nice Middle-Eastern look, I have ordered "Steppe unwatered" dioarama base from Model Scene which looked fine by me on the computer screen. This is a finished grass mat with some brushes nicely applied onto a brown-painted basic material but when I put it onto the diorama base I had to realize that the mat is way too thick and looks illusoric on the diorama base. It was not an option to use, even with considering any modification or cutting out some parts or any other idea. Simply did not work. It is not the fault of the grass mat, but the Miniart diorama base is so detailed and nicely structured that it does not need anything more than some simple grass material. Basically a static grass and some sand paint would be enough to complete it.

I have no static grass, nor applicator so had to look after something other solution. A bit earlier I bought some tear-and plant grass mats in a local model train shop (recommended from H0 trains up to 1:35 scale maximum) which is full of fine threads but nicely imitating the grass, IMHO. And tearable by hand, so forming the proper shapes and size is pretty easy.

So I teared some and glued it with PVA onto the surfaces where Miniart formed some grassy areas, including the middle of the road itself. 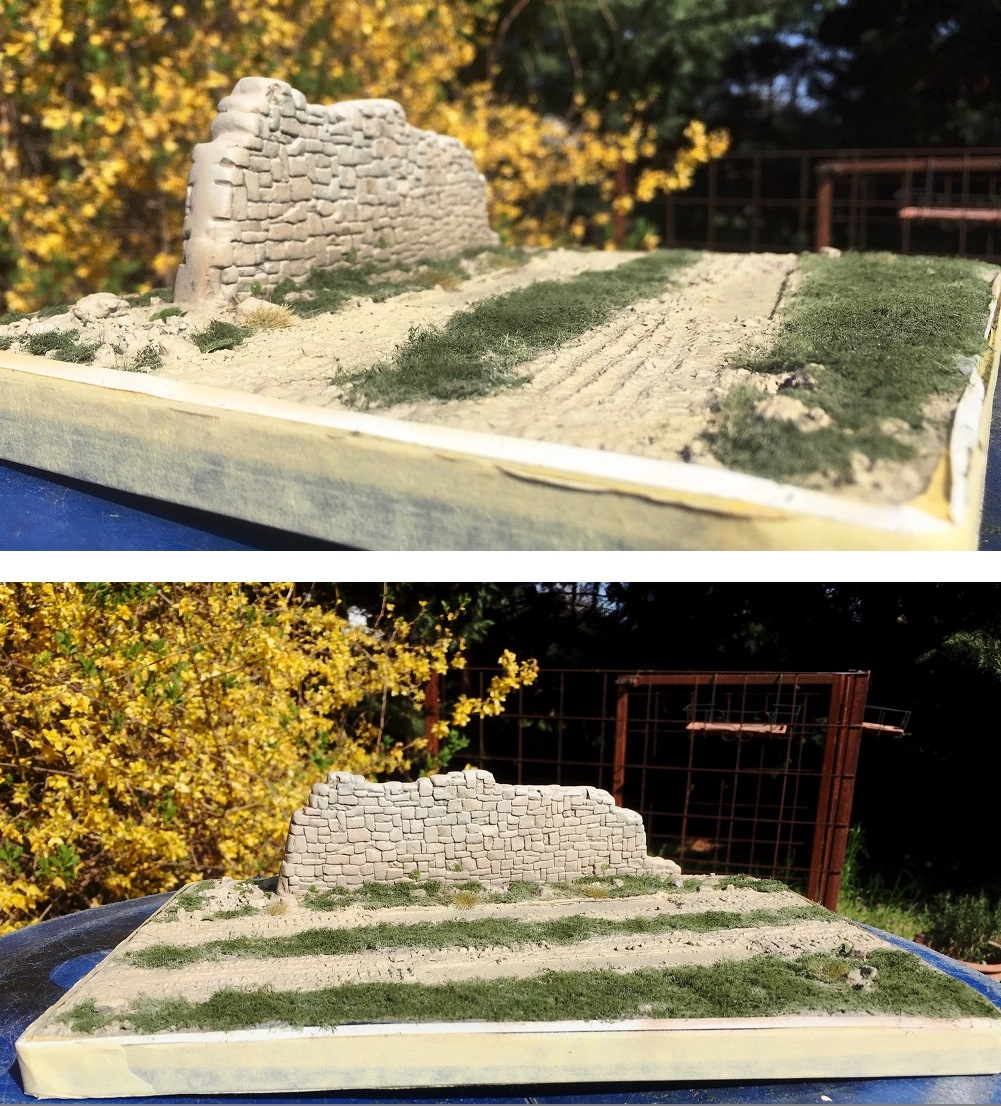 Initially the grass mat was more dense than I wanted but after the PVA dried I used a tweezer and pinching the grass and tearing upwards, all un-glued materials were easy to remove. Just a lower layer of grass remained on the base plate. The final look is exactly what I was looking after.
Now the grass dense and height was OK, with enough sandy, bare areas. But the green color was too uniform so I used the tank weathering technics to provide some depth to the grass. I used dark green and dark brown Mig Panel Line Washes to the less dense grass areas where the soil would be more visible. Both colors were applied freely and randomly. After this I used the old trusty dry-brushing technic with Mig-219 Interior Green and a mixture of Mig flat white, dark green, yellow and many-many sand paint and this mixed colour was also applied, trying to imitate dried grass. All these dry-brushed colours were applied in patches just like when there are some different genres of grass tuft together. It is not perfect yet (some highlights are too white) so a next run will be applied on the next weekend, but the basic idea works and proven.

And finally I base painted the bricks and stones lying around first with Mig-075 Stone Grey and highlighted with a mixture of flat white and some stone grey. 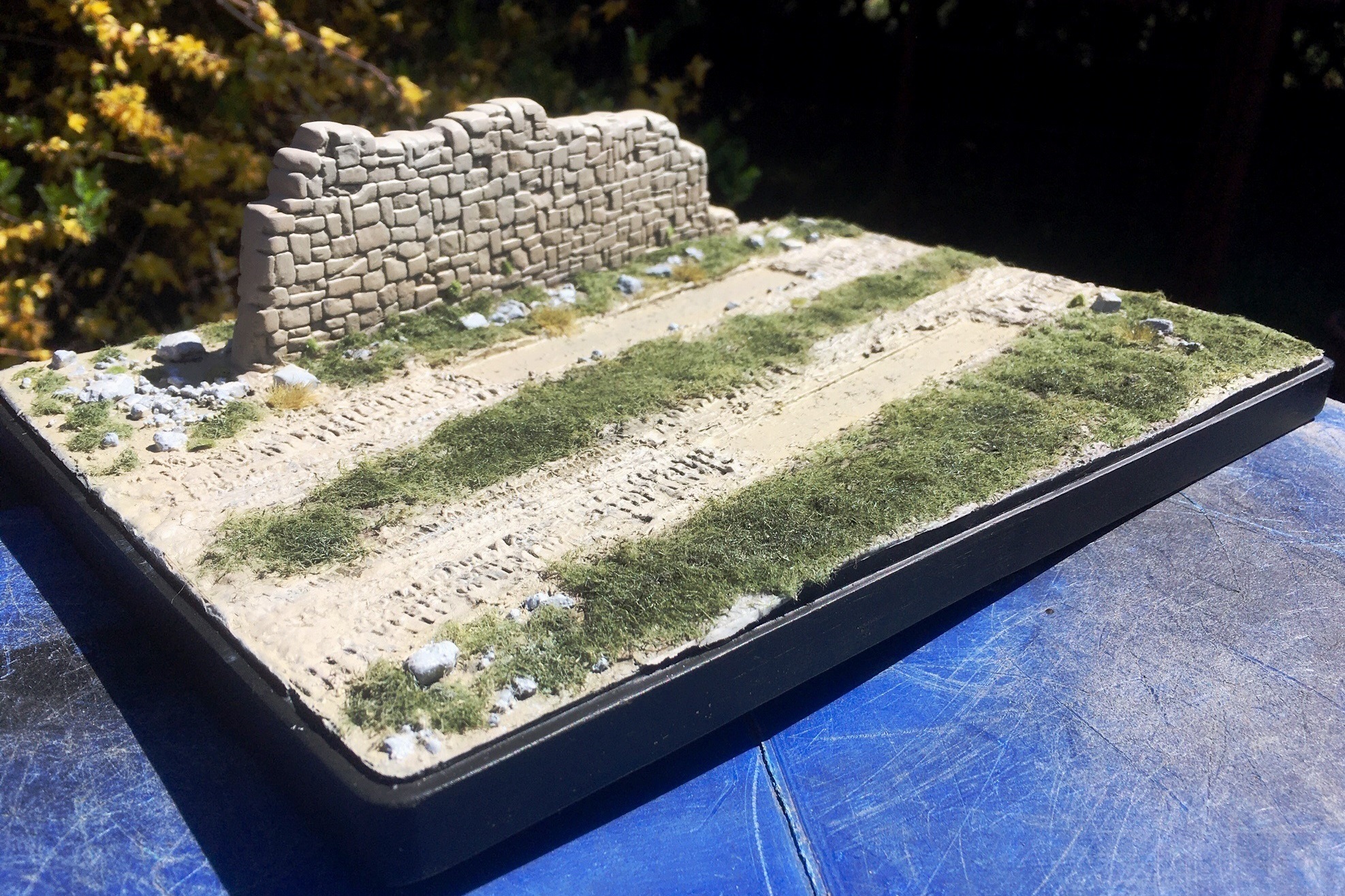 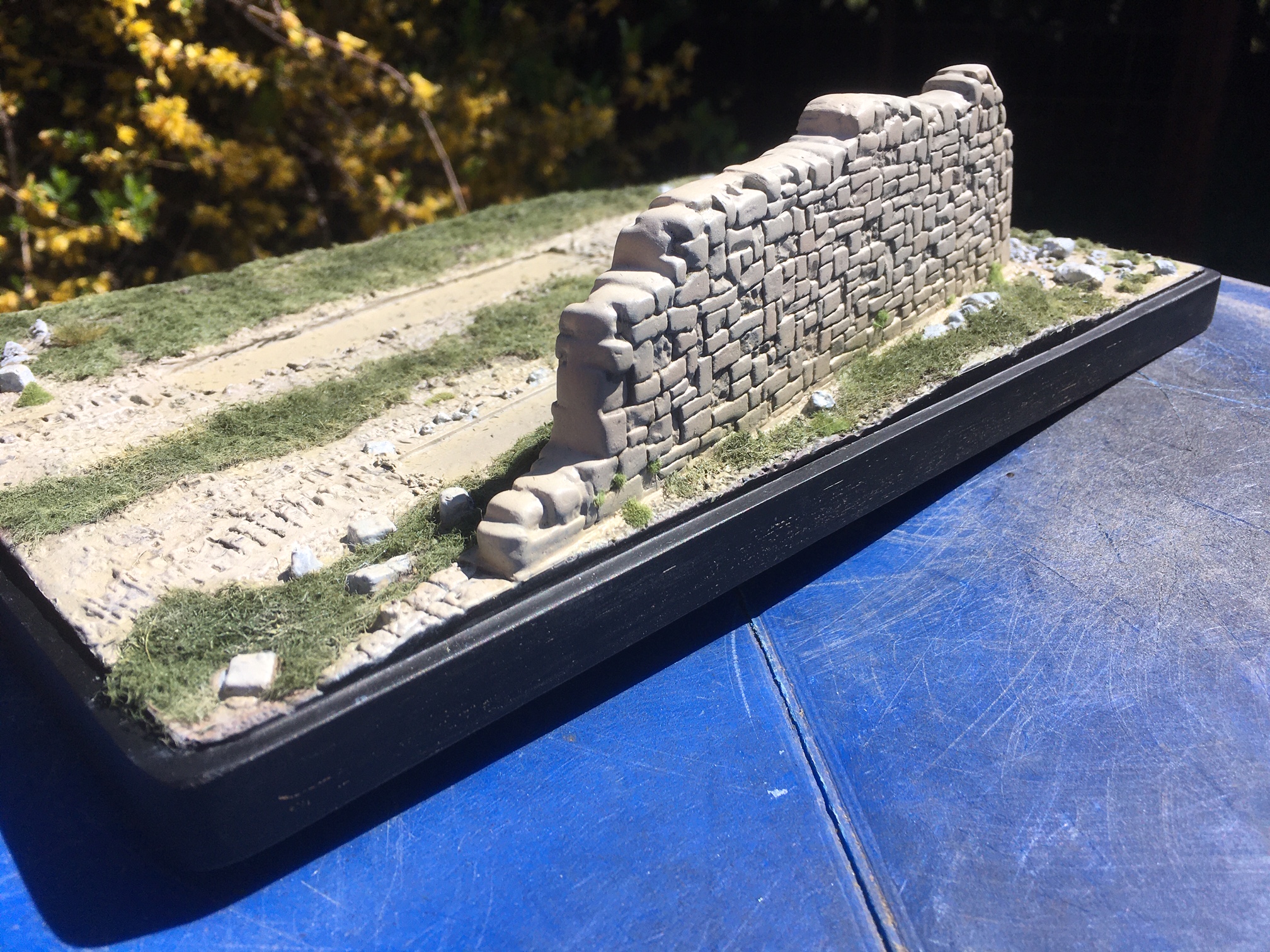 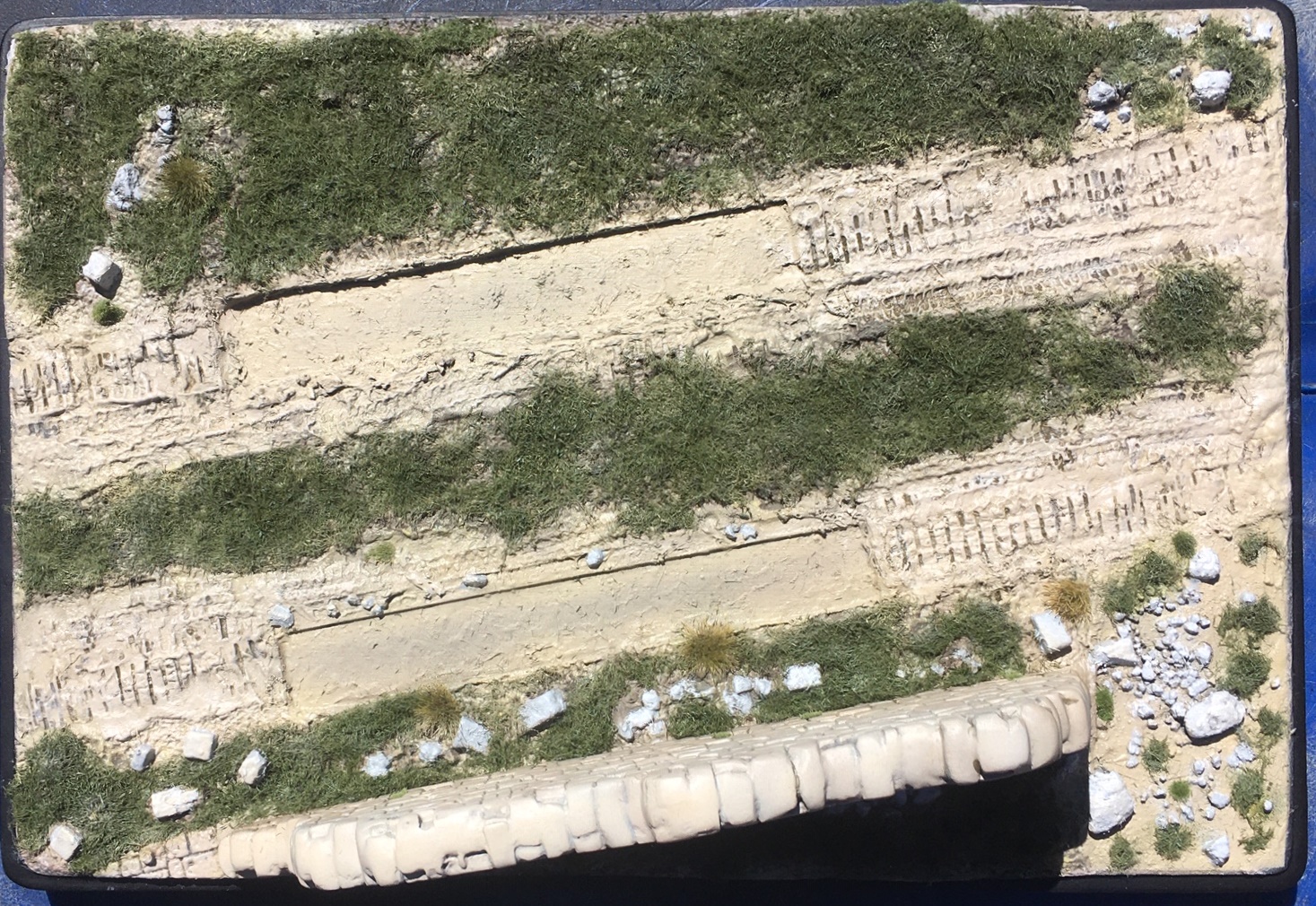 And a visual check with the tank to have a good impression if everything matches. 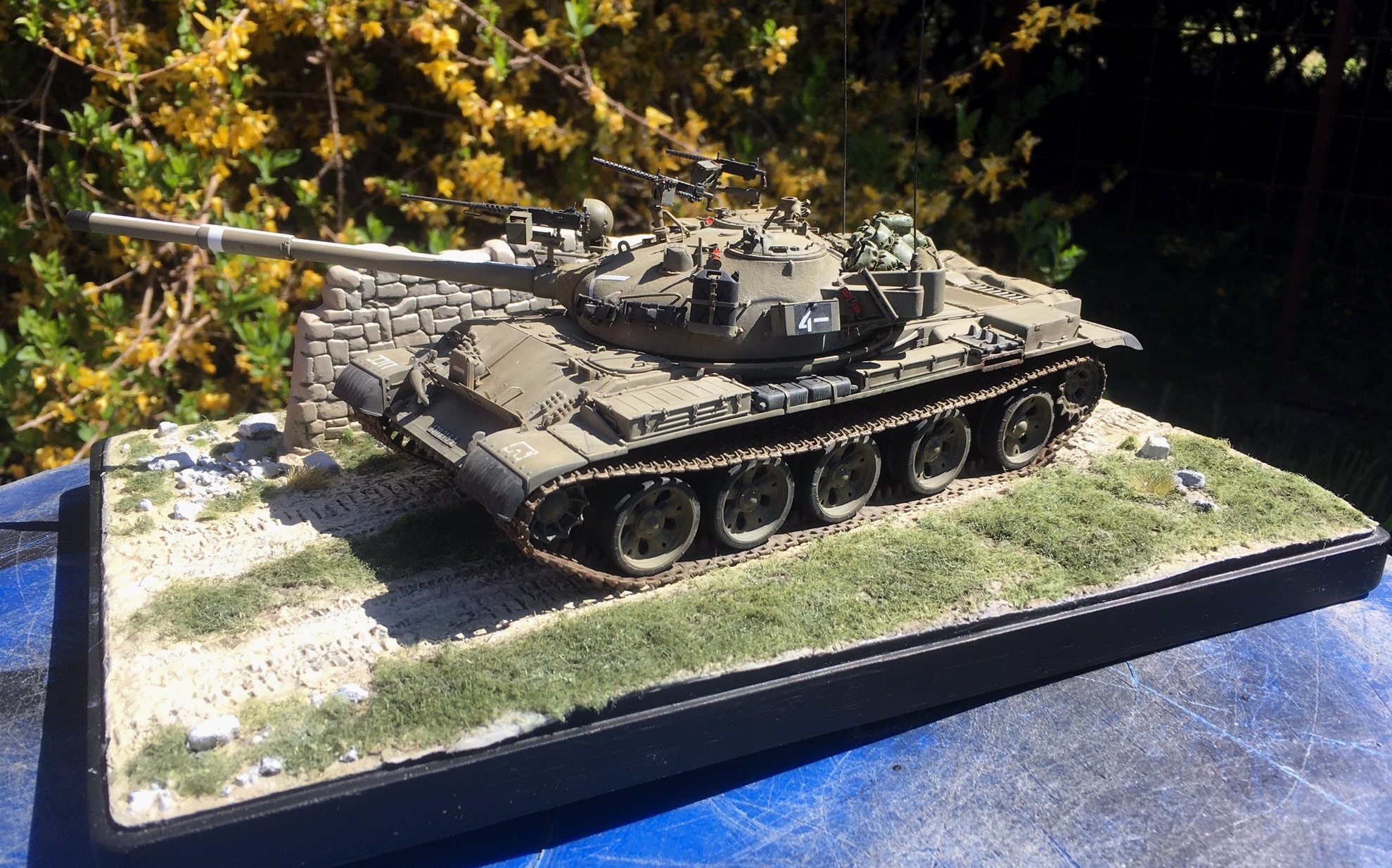 The next step is to correct the drybrushing. In the meantime I am making the Dragon Israeli Paratroops kit hoping that three of the figures will be OK and can put them into the diorame. These guys are my first figures to make so I will not hesitate to waste them if will not succee with gluing and painting.

One more point: I did not apply sand and dust pigments because I want to make sure that the same shade of pigments will be applied to the diorama like I used on the tank itself. It does matter as the pigment will "blend" together the diorama, the tank and the figures, too.

I have offifically finished this buldlog now, having completed the Israeli Parachuters figure set and the Miniart diorama.

I think it looks quite well as the figures' poses look pretty realistic (although the Dragon kit itself shows its age).

These guys are my first pro-attempt to paint figures and having this said, they are OK. Surely not satisfactory to a figure-ace modeler but on my level it is fine by me.

Enjoy the pics as I enjoyed the build. 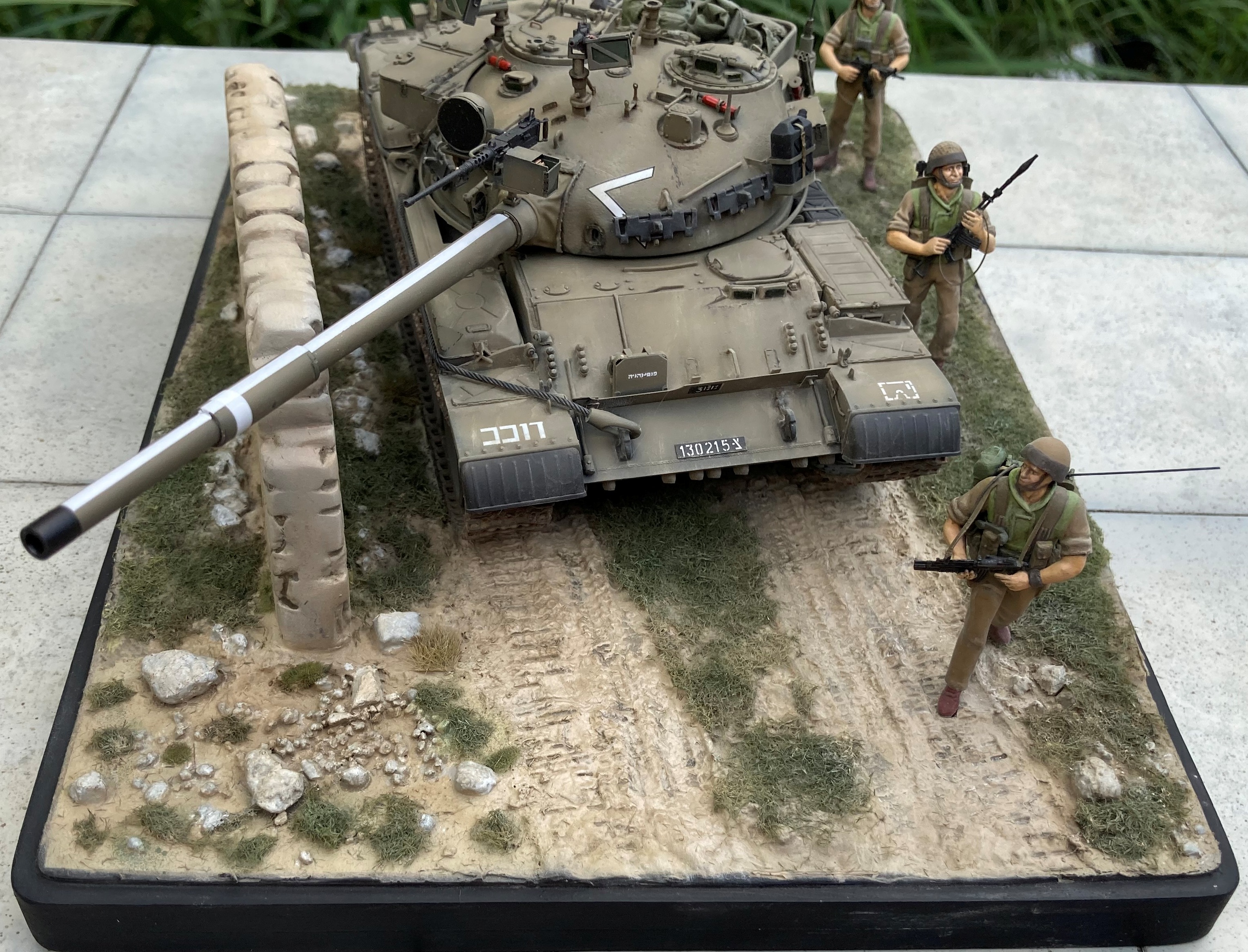 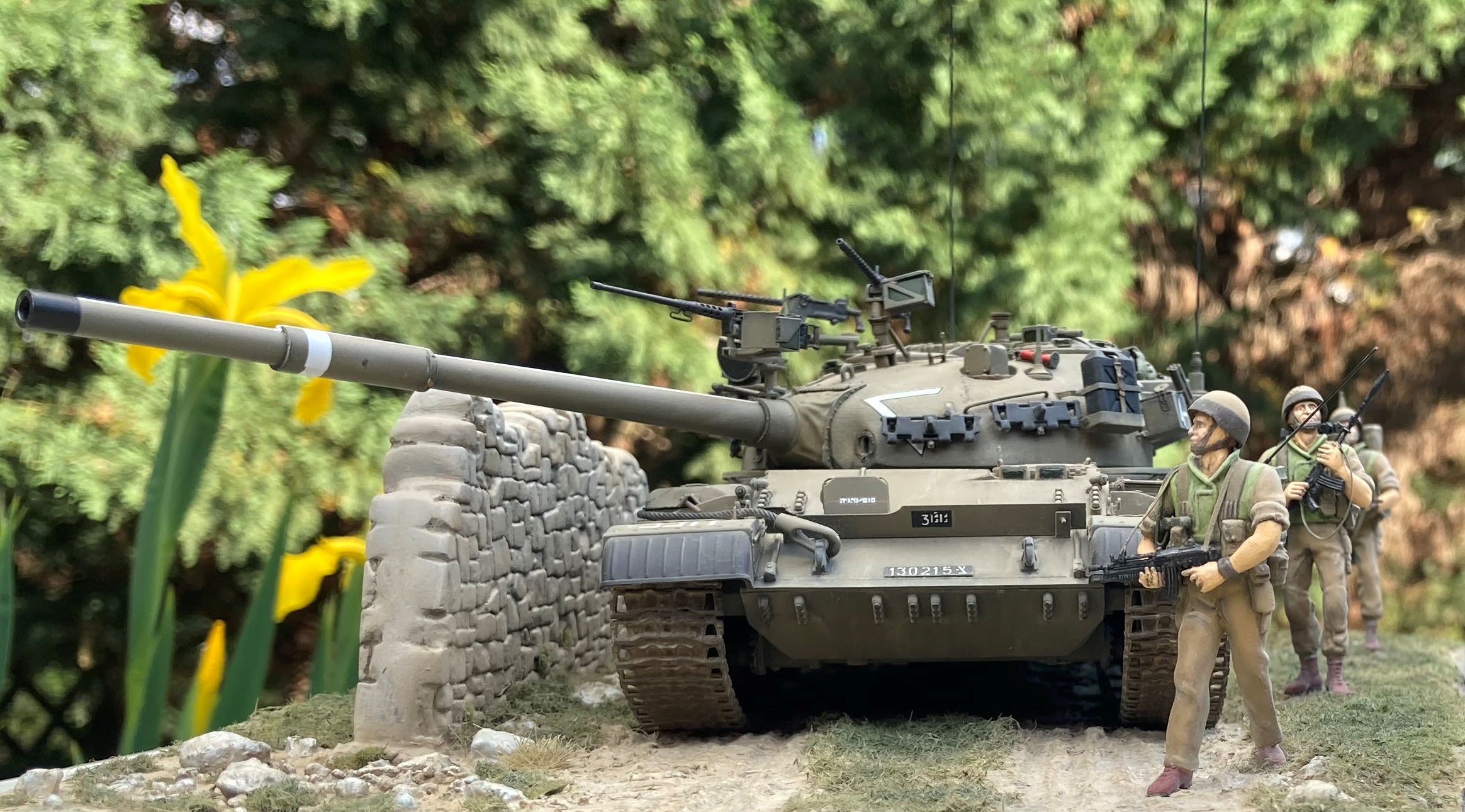 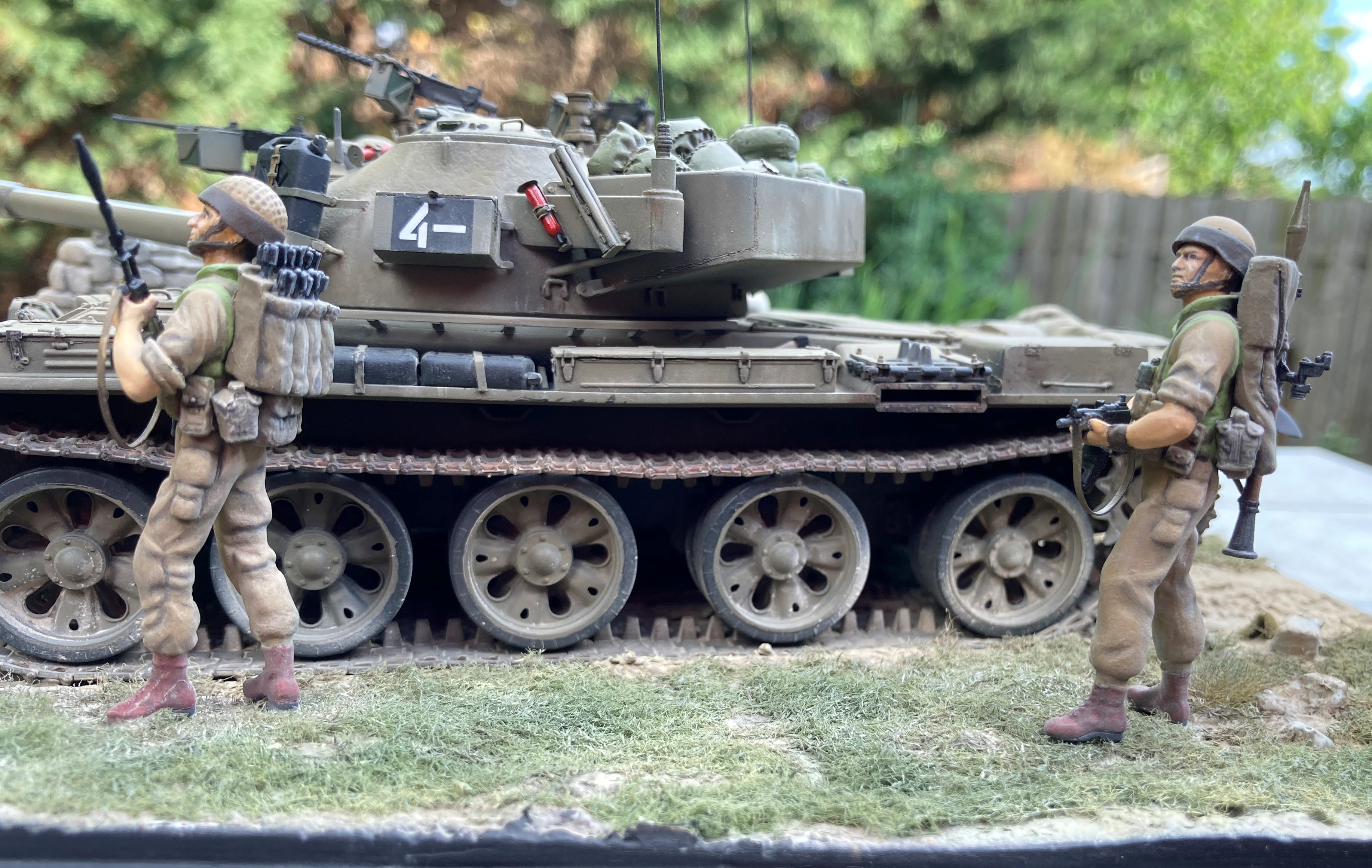 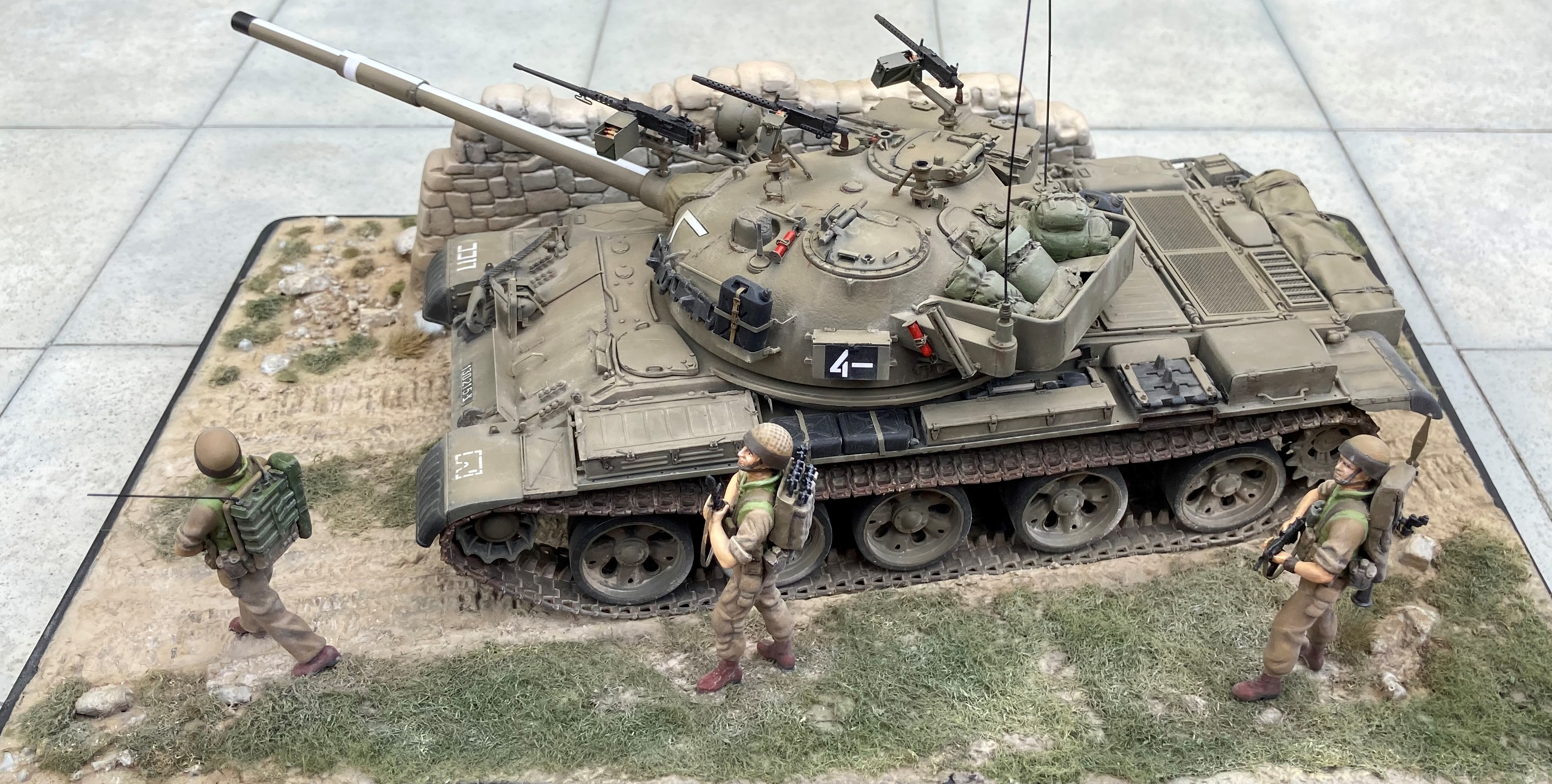 I always prefer to use single track-links instead of the traditional single vinyl track and I was happy to see that the kit has singles. After starting the boring sprue-cutting and cleaning process, I realised that the Trumpeter track-links have a bit poor details versus the ones in the Takom T-55A kit I used in my Tiran 5 kit earlier. Also the Takom tracks are already separated (oh Yes, I am lazy enough) and just a little clean-up is required. Surely a Friulmodel set could have been better, but being quite expensive, I decided to buy a Takom OMSh set from a local modeler and this is what I used.
The main gun and all machine gun barrels are also replaced - by RB Models a/m parts. The Trumpeter kit has both the plastic two-halves and a relatively simply metal barrel versions but when I checked the box content for some reason I did not find the metal barrel so ordered the RB Model version. After receiving it, I just found the Trumpeter one. However, the RB Model version looks much better for me, so it was built-in.
Another a/m part is the M2 machine gun body which I took from a resin Legend Tiran 5 kit (designed for the Tamiya T-55A kit, far before the Tamiya Tiran 5 was released) which I partially used to make my Tiran 5, based on a Takom T-55A kit. The M2 mg body was not used that time, so I could use it up here.
Also, many small details of the machine guns and all the ammo boxes are improved using the Eduard set. I do like the realistic holes in the RB Models barrels (see the M1919 mg for example, it is simply beautiful). 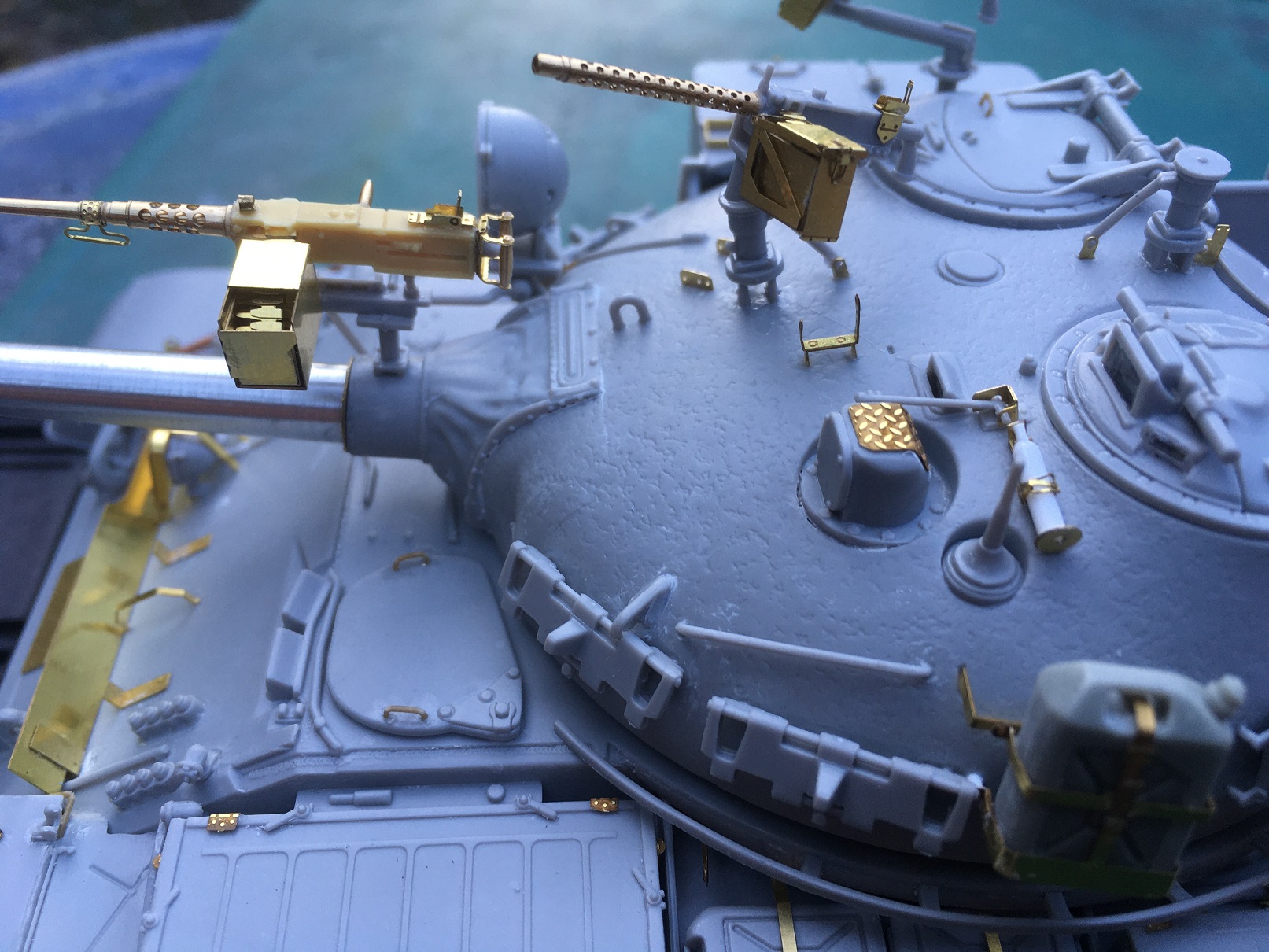 Apart from the above improvements, I also scratch built some details like that 4-tube something on the left side of the rear turret basket. 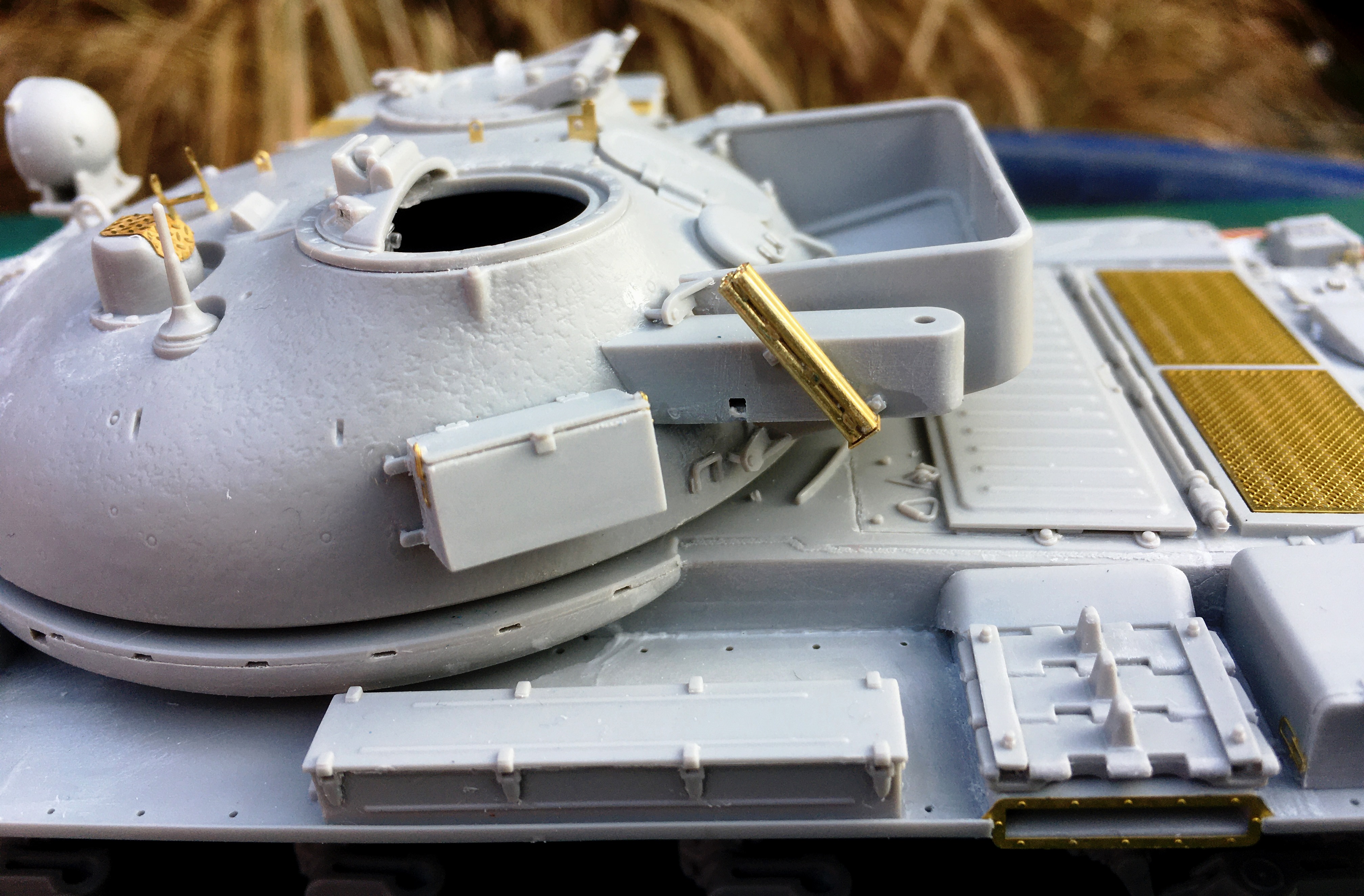 I tried to drill out the tubes but after my plan failed, I decided to remake them from brass tubes. The welding between the tubes is imitated using small plastic parts glued.
Another minor improvement is a small "spring" on the engine deck which I made from a round-wound electric guitar string, glued into a plastic holder.


As described in a few books, those 4 tubes are utilized by each vehicle's commander for use of signal flags.

By the way, damn nice work! I'll be 'stealing' some of your improvements for my very own use!

REPLY & QUOTE
kaleu (Erik ) said
Thanks for posting images of the finished model and the diorama. I've enjoyed watching the progress of your build.

Thanks buddies, it is nice from you,both, appreciating.

I hope you will use some of the ideas I found and made during the buildlog, which I enjoyed.