REPLY & QUOTE
b2nhvi (Tim) said
While researching the 6th South African Armored for my Sherman V AOP I found this photo. Looks like a Sd Kfz 7 to me. But I've not found reference to a recovery version. Field mod? Any thoughts on the crane type? It looks (from what I can see ) the 3 ton crane Miniart has out. All the other German cranes ... Bilstein and such .. all have pole booms. Last, any thoughts on the AoS? Looks like a solid color with a "9" on it.

REPLY & QUOTE
Jmarles (Julian Marles) said
I think it's an Sd.Kfz 8. Here is a 9 captured one pulling a Crusader.

REPLY & QUOTE
Frenchy (Henri-Pierre) said
I believe it's rather a Sd.Kfz 8...Maybe a one-off ? 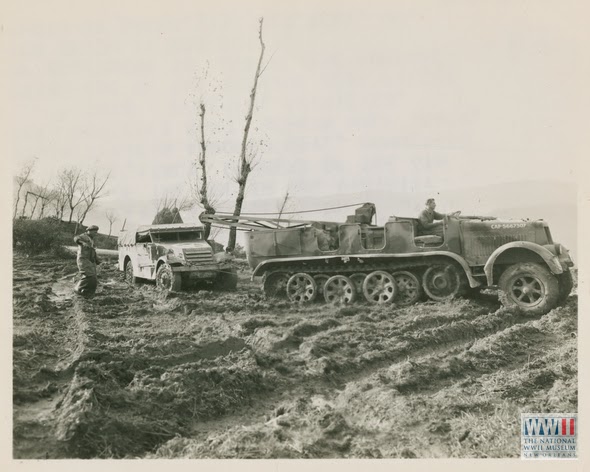 As for the crane... It does not look like any of the WWII German vehicle-mounted cranes that I have been able to find photos of in several Google searches using a range of call-outs and key words. It also does NOT look at all like any of the MiniArt cranes, nor like those put out by AFV Club or IBG or... on any of their truck-mounted crane kits.

Of course this does not mean that I have seen every type of German vehicle-mounted crane used during WWII, but I have likely seen ALMOST all of them... and likewise no guarantee that this wasn't an actual German-fabricated vehicle (albeit the photos showing "8" and "9" fitted with cranes for recovery service seem to show that the rear body sides were removed, unlike on the pictured vehicle)

It is pretty interesting to note that the boom is a fully-boxed-and-braced type - A type of boom structure not generally seen in smaller German cranes of the period (where boom frames usually featured a cross-braced bottom frame plus cables and, in some cases, tie-rods on the upper portion above the bottom frame), but something that was seen on some Allied cranes, where the boom is a non-articulating composite box that pivots at a base hinge...

Also interesting to note is that the vehicle camo-scheme is carefully carried over onto the crane boom - so the scheme was likely painted on after the crane was added.

Maybe this was a captured "8" that was field-shop-converted and painted by new management...

REPLY & QUOTE
b2nhvi (Tim) said
I received an note from William Marshall about this photo. "I can confirm the following: Sdkfz 7 belonging to 14 Armd Div 2nd Line Transport Workshop under command of 6 SA Armd Div HQ. Recovering a White Scout Car. All covered in my book." (Camouflage and Markings of the 6th South African Armored Division. Part 1: Armored Vehicles: North Africa and Italy 1943-45) Still leaves questions about the crane and the AoS one the fender.

REPLY & QUOTE
RobinNilsson (Robin Nilsson) said
I got curious since there was some confusion about the halftrack being an Sd.Kfz.7 or Sd.Kfz.8.
After asking Google about images I came to the following
conclusions:
1. They are hard to identify just from the looks/size
2. The number of holes in the discs of the three outer roadwheels can be used to id them. Seven holes says it is an Sd.Kfz.7, eight holes says that it is an Sd.Kfz.8
This is valid for the wartime versions with the sloping front grille. The early versions with a vertical grille could be different, my search for Sd.Kfz.7 returned an image of a halftrack with vertical grille which only had two outer road wheels and those had 8 holes, the distance between front axle and the front of the tracks was also larger (prototype??).

REPLY & QUOTE
On the bench: Chaos!

Thanks for the tip Robin !

REPLY & QUOTE
covkid (jdyde) said
Hi, the photo with the white scout car I have seen before in a referrence book for the sd.kfz7, by Ampersand I think.

As for the crane, it looks like a Coles crane of the type fitted to Thorneycroft Amazons amongst several others. Probably salvaged from a wrecked truck.