REPLY & QUOTE
b2nhvi (Tim) said
Saw this on another site. Looks like a real early M4A1 with a replacement turret in Germany in 1945. What are the chances of the old M3 suspension having been retained with all thhe other upgrades, applique armor, rebuilt turret with commander's vision cupola. I'd figure by 45 the suspension would be clapped out or the tank itself destroyed or "retired".

REPLY & QUOTE
RobinNilsson (Robin Nilsson) said
Could the M3 bogies have been swapped in when nothing else was available?

REPLY & QUOTE
Bravo1102 (Stephen C. Willoughby) said
It went through the remanufacture program. You can tell from the wide M34A1 mantlet and applique armor. It is real and a few did exist. There is at least one other photo of an M4A1 with remanufactured features still retaining the early suspension in the old Squadron M4 Sherman in action. It's a rear shot and obvious because the trailing return wheel arms aren't visible where they should be.

Hunnicutt mentions that not all tanks in the remanufacture program received all the features and some got through without one new bit or another to include the suspension.

There were early unchanged M4 and M4A1 (even direct view ones) with the older suspension that served until the end of the war in Italy. Numerous photos of them at Anzio in 1944 and in assembly postwar. They were never remanufactured like those in NW Europe were before D-Day. It was deemed more important to keep them running because parts were available but not whole new tanks.

Similarly there were M4A4 DV fireflies. They just had the vision ports plated over.

If it ain't broken, don't fix it. If it doesn't need replacement, don't. There's a war on.

And it gives one a chance to model an unusual subject.

REPLY & QUOTE
"The only thing a man should take seriously is the fact that nothing should be taken seriously."
Samuel Butler, Victorian satirist 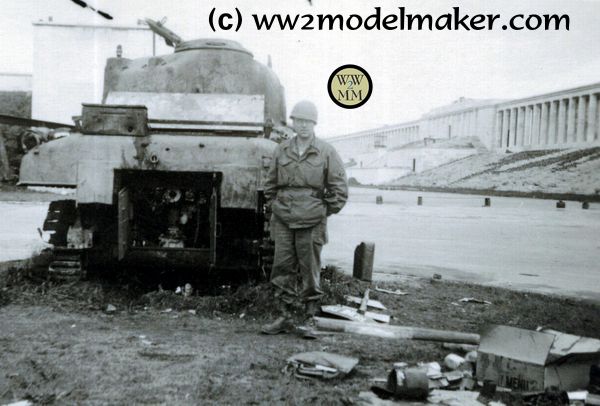 I'd say an upgraded initial/ early M4A1, with dv hull. It also had sandbag racks added.

"A black cat crossing your path signifies that the animal is going somewhere."
Groucho Marx