You are viewing the archived version of the site. Go to aeroscale.net for the current dynamic site!
mainAir Campaigns

REPLY & QUOTE
Bigrip74 (Bob R.) said
Jesper, its nice to see an A6 here. I will eagerly follow your progress.

Jose, tell me about that Airfix kit. Are the panel lines raised or engraved?

REPLY & QUOTE
SGTJKJ (Jesper) said
Thanks for the comment

The kit is significantly older than I thought. Despite having a lot of raised detail, overall the detail is quite good. I can make something decent out of the cockpit straight out of the box.

Cockpit done and a lot of ordnance on the way. More to follow soon 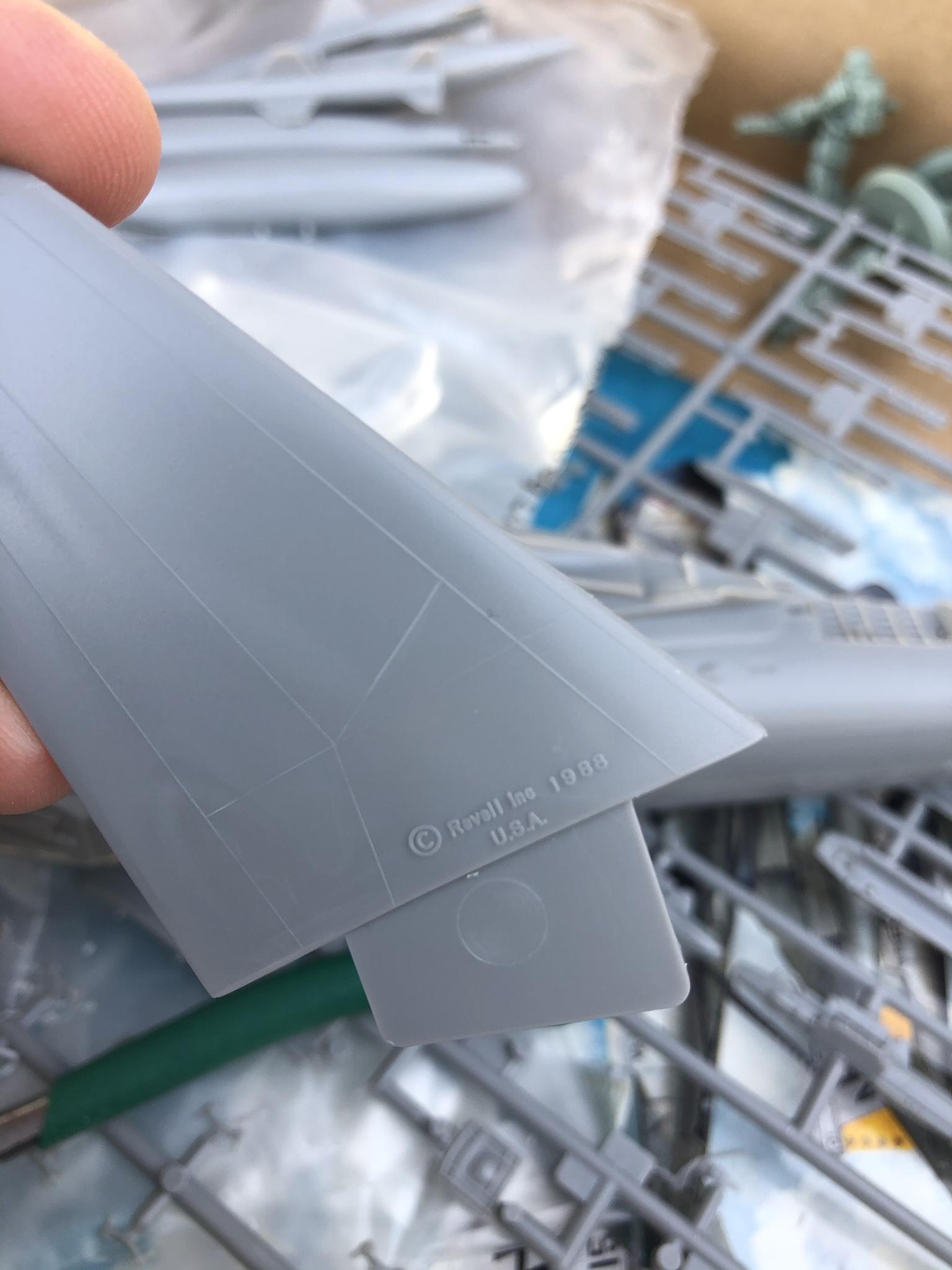 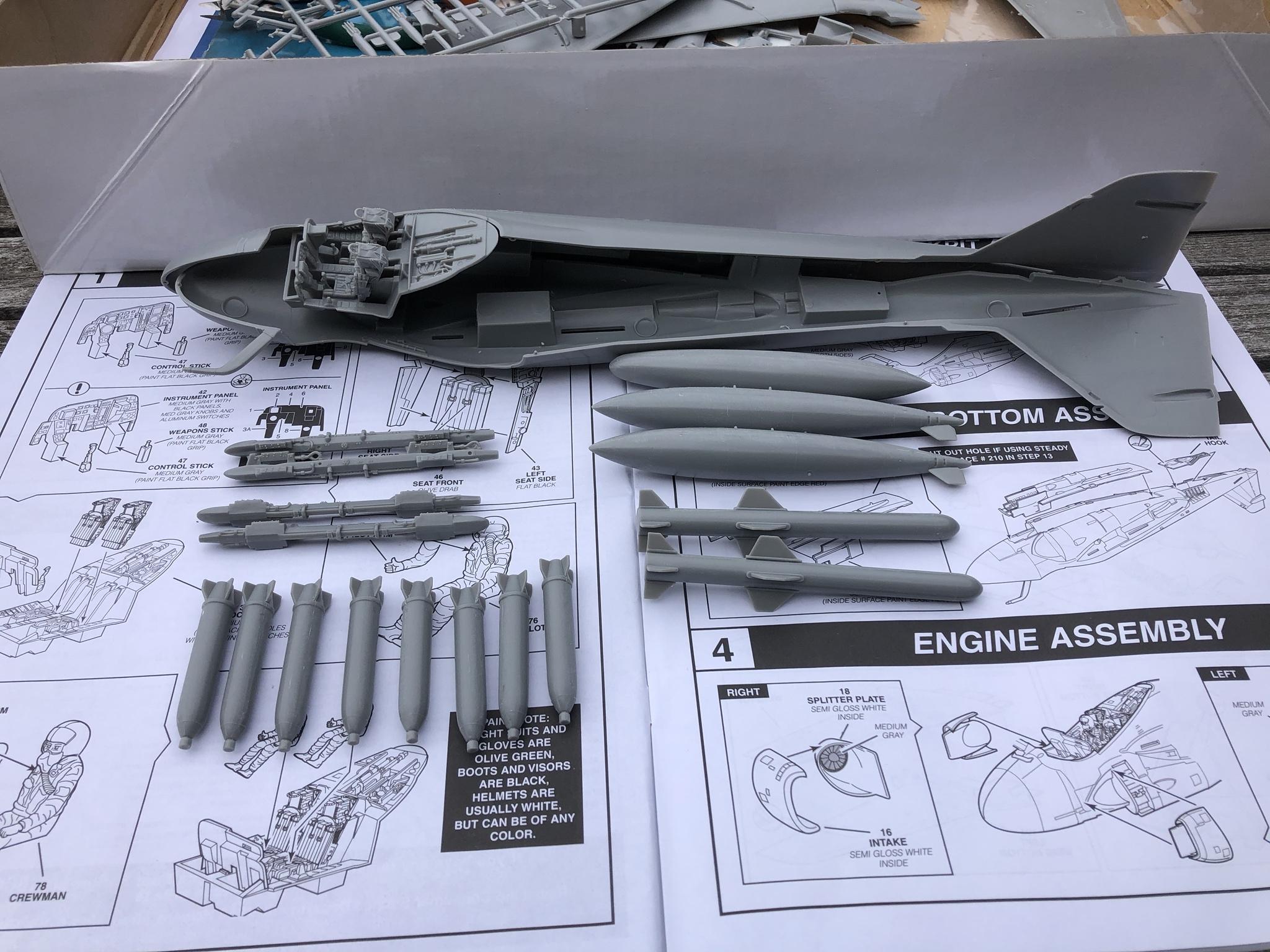 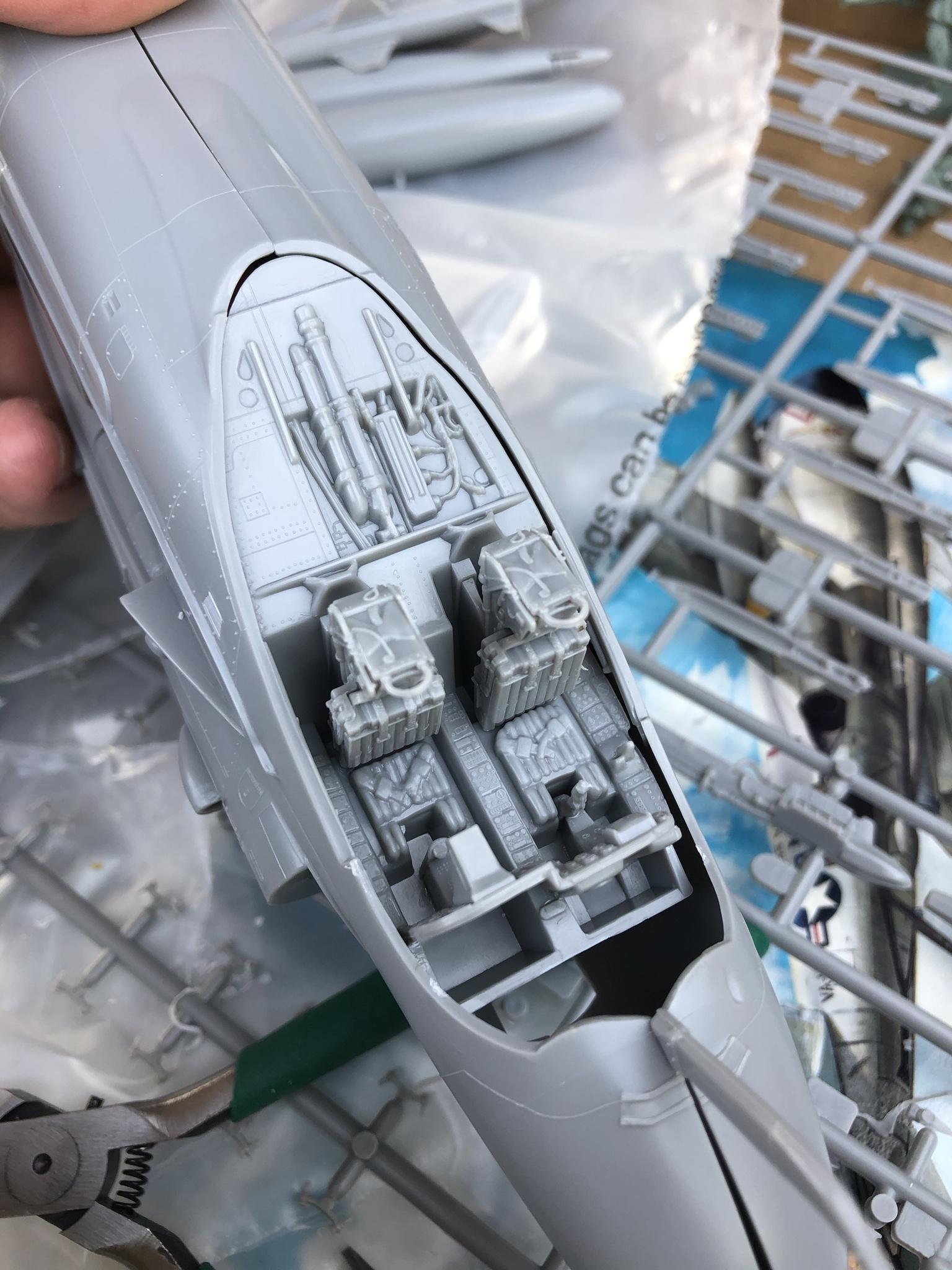 I built the Airfix FGR2 this year, so I hopefully still know where to take special care and avoid problems. All in all it's a fine kit.
Had to find volunteers to man the cockpit, as Airfix just missed to provide them in the new-tool Phantom kits

The WSO turned out to be a little on the small side, but at least he fitted into the rear seat quite good and didn't lose his legs....
Cheers
Peter

The Airfoil kit is the new one. It has engraved panels.
Today I start building

Jose, tell me about that Airfix kit. Are the panel lines raised or engraved? 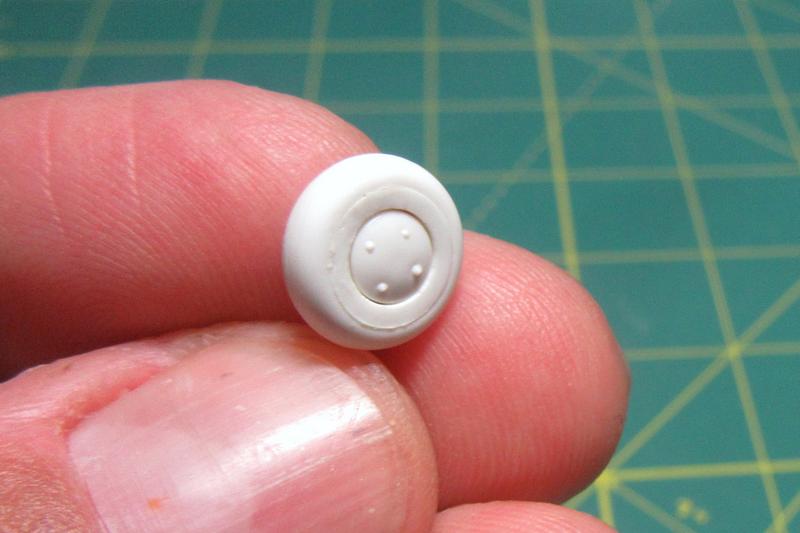 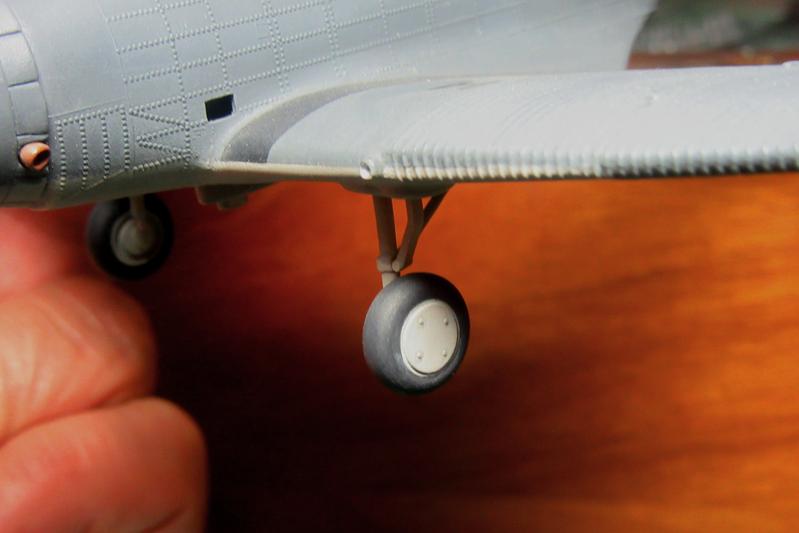 Chugging along with my Airfix Devastator, I managed to lose one of the wheels (the surviving Airfix one is in the top pic), so both were replaced with slightly altered parts from an old Heller Me-262. 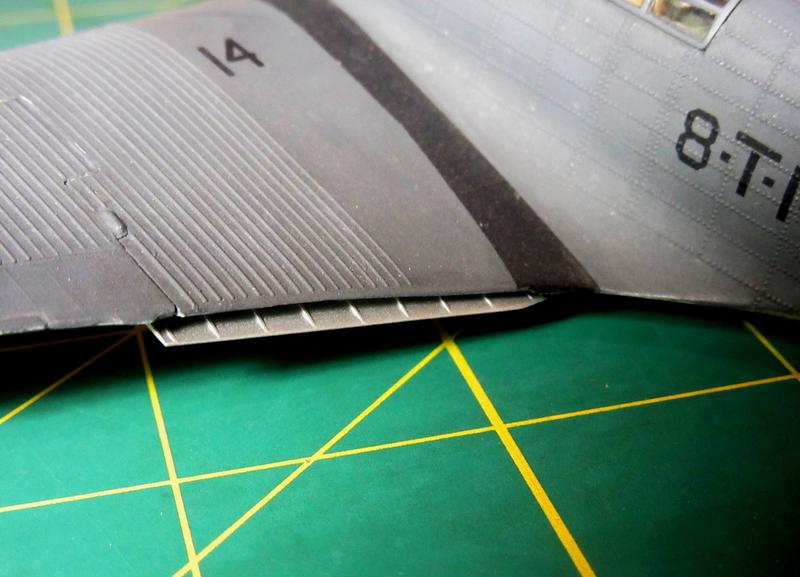 I also added scratchbuilt flaps under the wings.

Tim: You would never have been able to tell the difference on those wheels, they really look the part of the originals.

REPLY & QUOTE
md72 (Mark Doremus) said
Tim, the wheels look great. However, I think the wing fold line looks even better, how did you do it?

A bit more progress on my Intruder. Base color is on - next the ghost Grey and insignier White. I Will use AK true colors for this one. 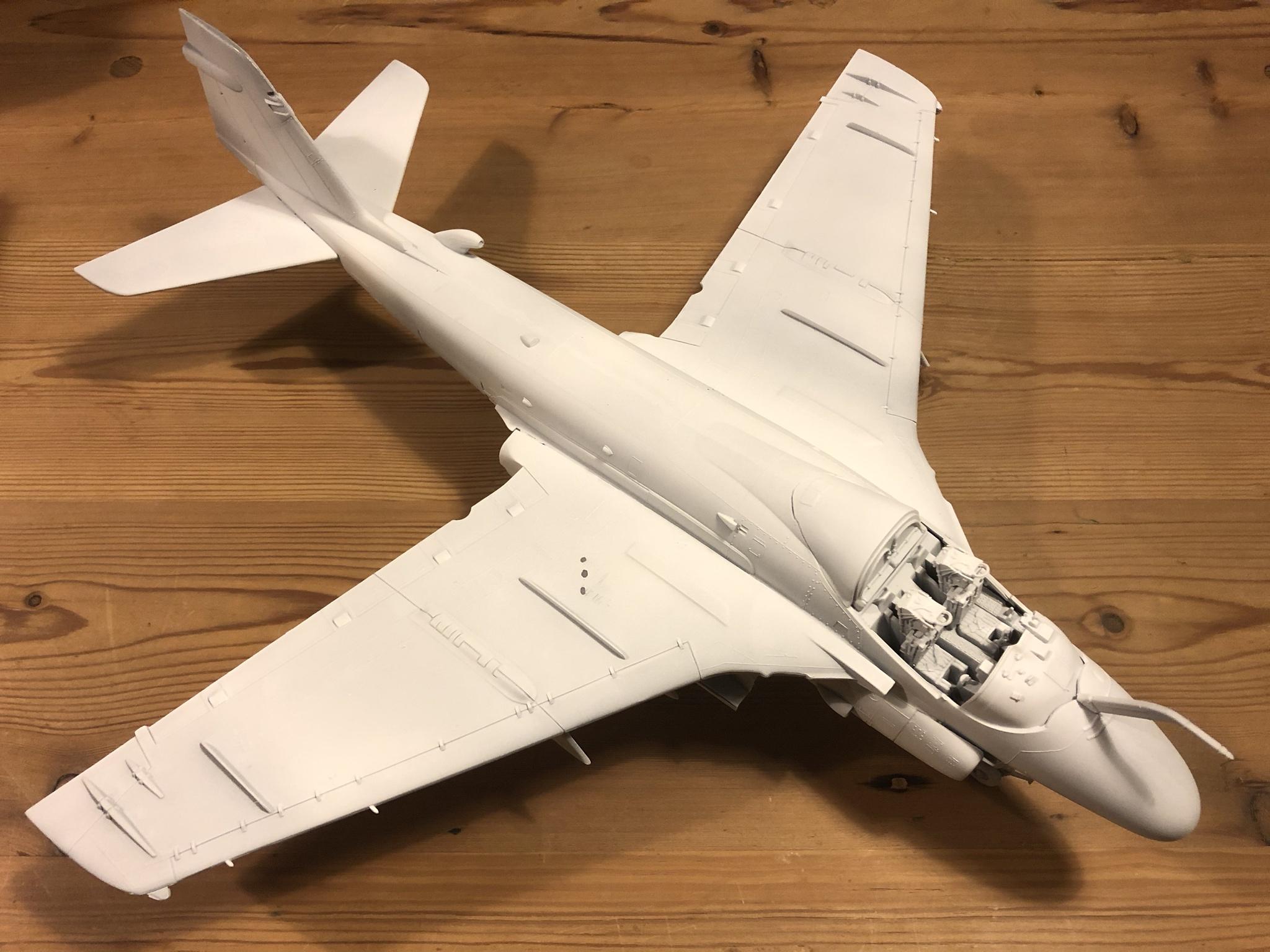 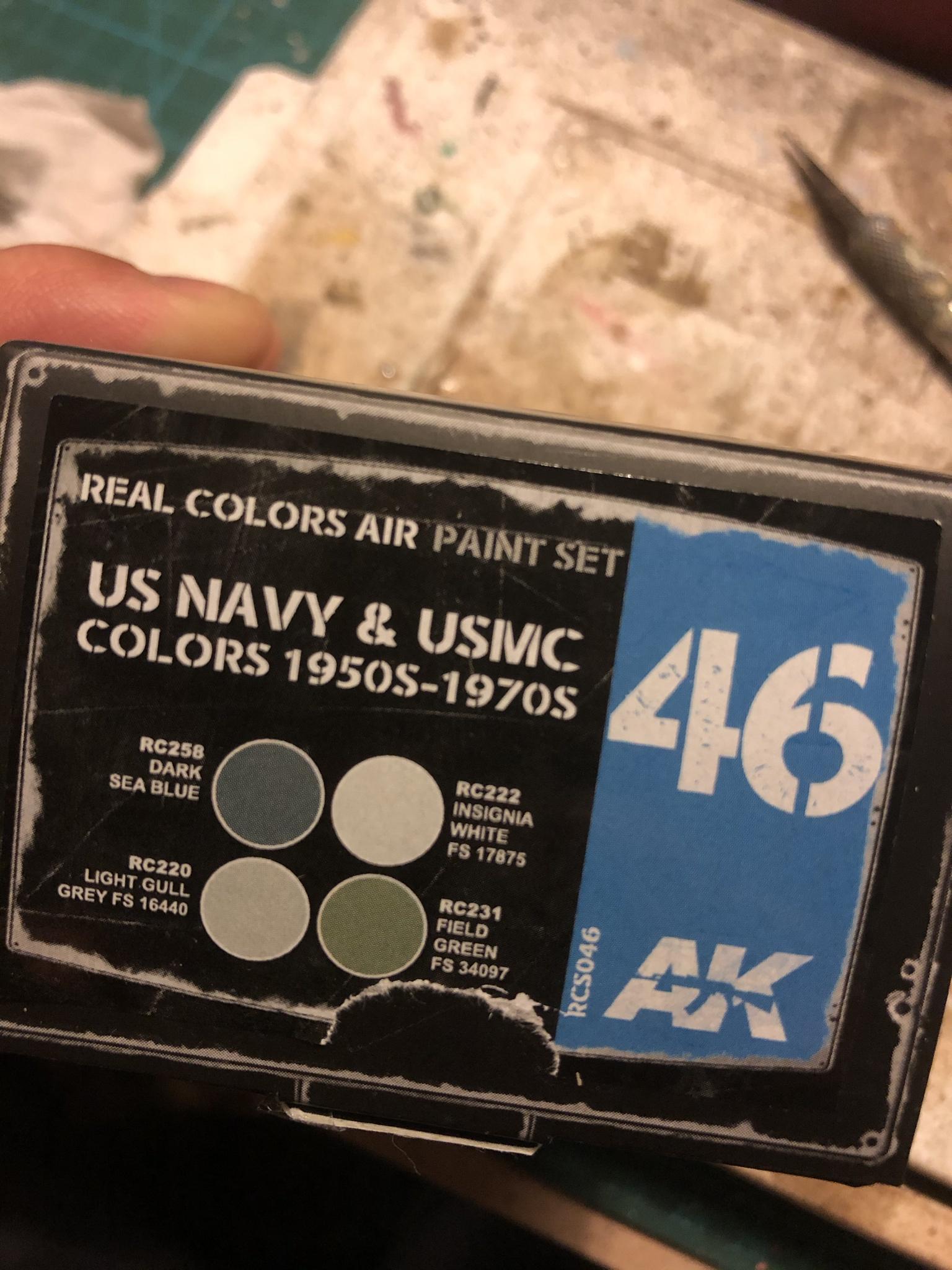 Tim, the wheels look great. However, I think the wing fold line looks even better, how did you do it?

Rory, Mark, and Jasper, thanks!

The wing fold was actually not too bad as the corrugated surface makes the seam less noticeable. I just let the liquid cement flow along the seam and melt the wing into place. 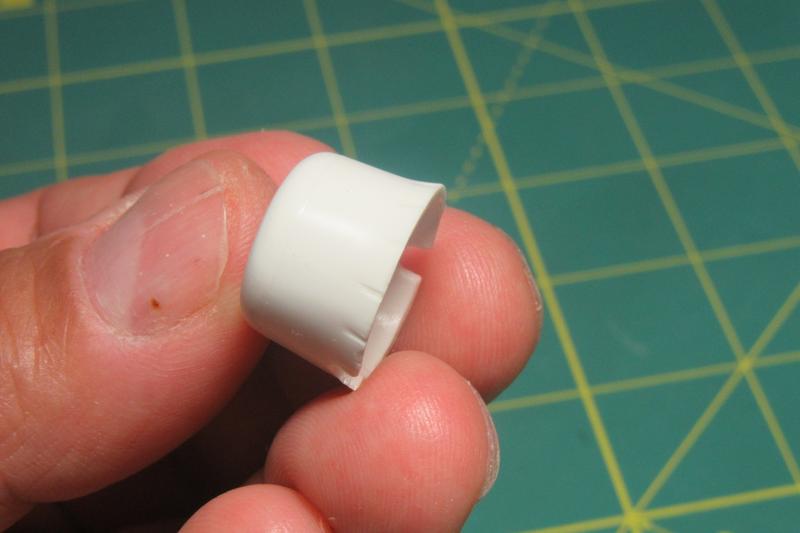 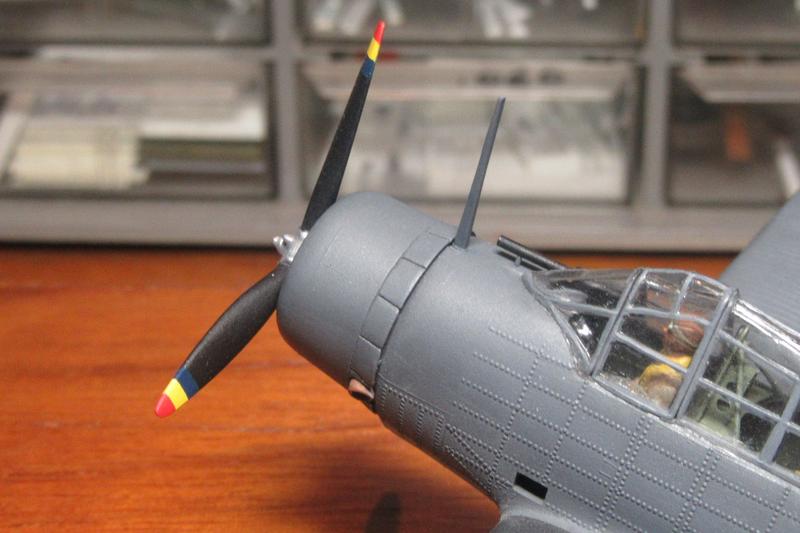 I wanted to build this thing out of the box, but the kit cowl flap details were so mushy I just had to scribe them in to make them sharper.

REPLY & QUOTE
TimReynaga (Tim Reynaga) said
The kit boxtop showed colorful prewar markings, but I wanted to depict the aircraft of the sole survivor of the famous U.S.S. Hornets VT-8 attack on the Japanese fleet at Midway, Ensign George Gay. 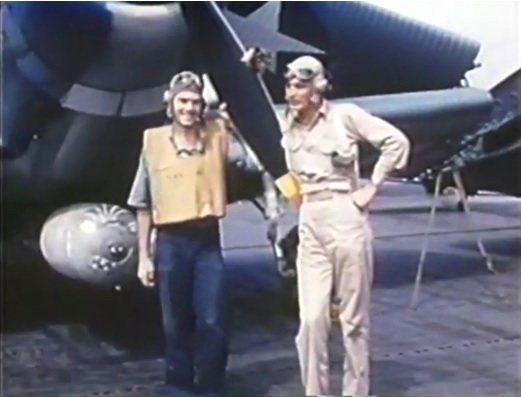 This image of Ensign Gay and his rear gunner, ARM3c George Arthur Field (killed at Midway), was taken aboard Hornet. Note the decoration of the torpedo, which was common among the aircraft of VT-8. 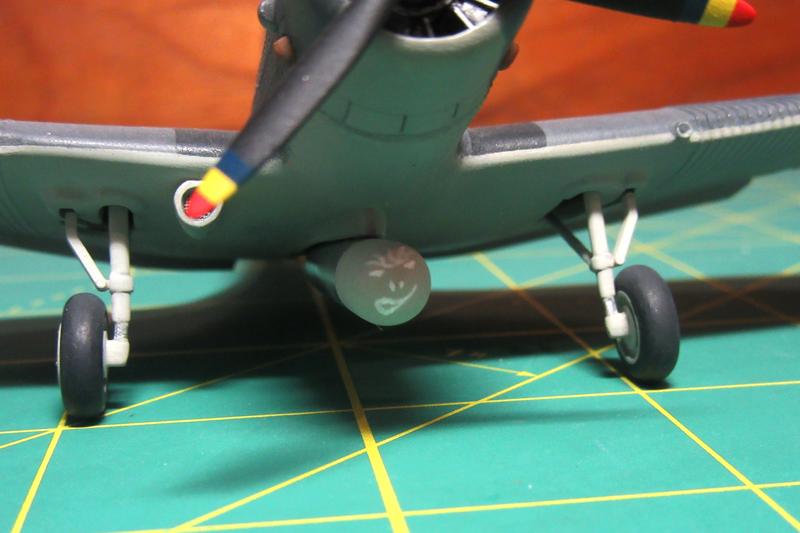 I did my best to replicate this marking in 1/72.

One of the nicer aspects of this kit is the crew. 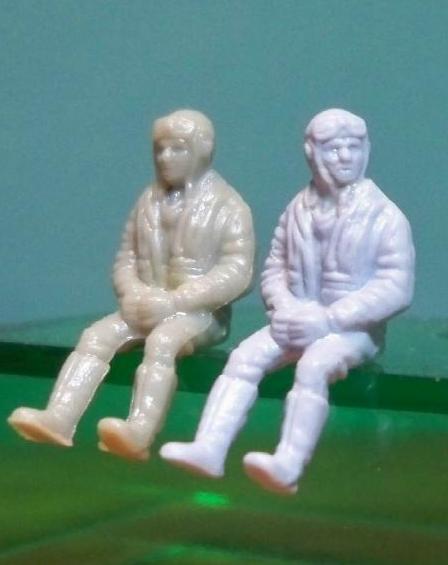 The figures in this picture, taken from other Airfix kits, are the same as those in the Devastator kit. As with the figure on the right, the only change I made to the TBD kit crew was to turn the head of the gunner. The pilot is unchanged. 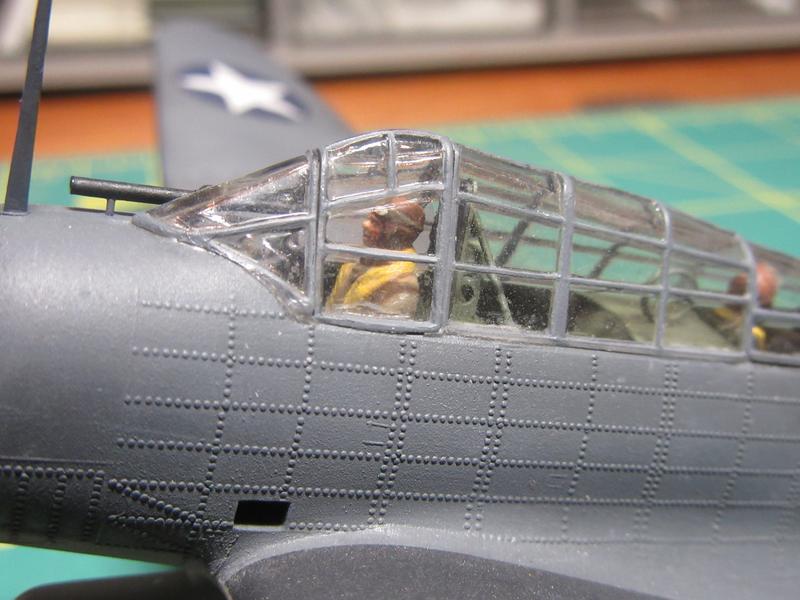 Painted up and installed, the forward-facing pilot adds a bit of life to the cockpit. 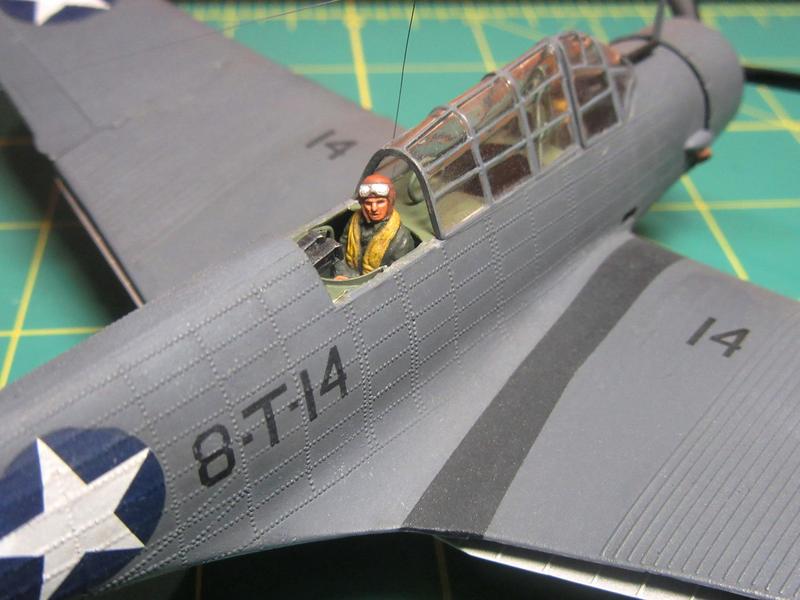 Im not normally a big fan of aircrew figures, but they can be useful to draw the viewers focus away from the simplified cockpits on older kits. 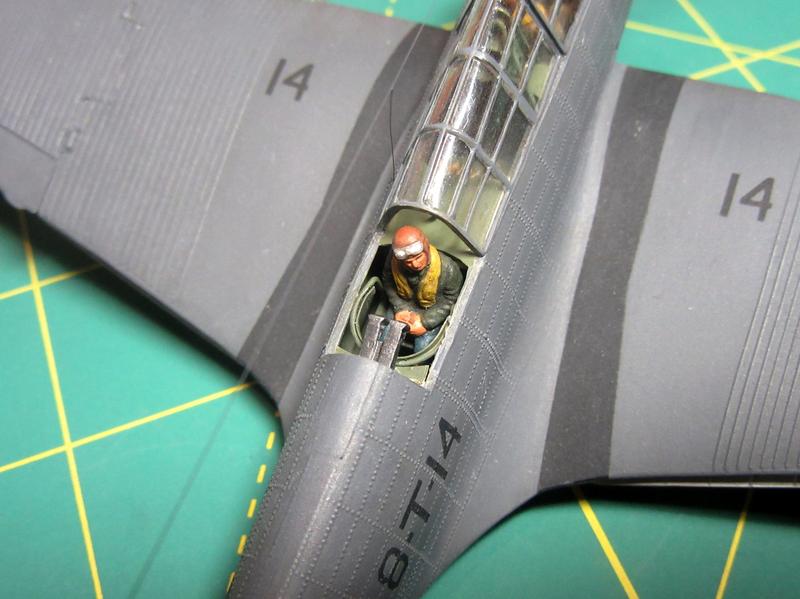 The only change to the gunners position was to add a simple scratchbuilt gun ring mount and a second .30 cal machine gun to reflect the defensive upgrade made after the Battle of the Coral Sea.

REPLY & QUOTE
md72 (Mark Doremus) said
Yep, I refer to them as praying pilots. Mine are praying I do one half as good a job on them as you did.

Yep, I refer to them as praying pilots. Mine are praying I do one half as good a job on them as you did.

LOL! Recent 1/48 and larger aircrew are much better, but for those of us who like smaller scales, these 1960s vintage Airfix aircrew still aren't bad. And painting them up is a whole lot easier than superdetailing nonexistent kit cockpits!

Anyway, I'm calling this one finished. 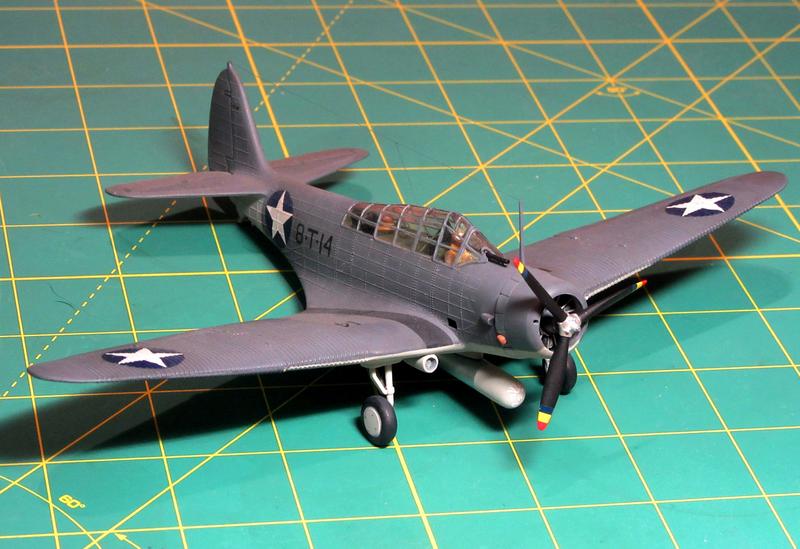 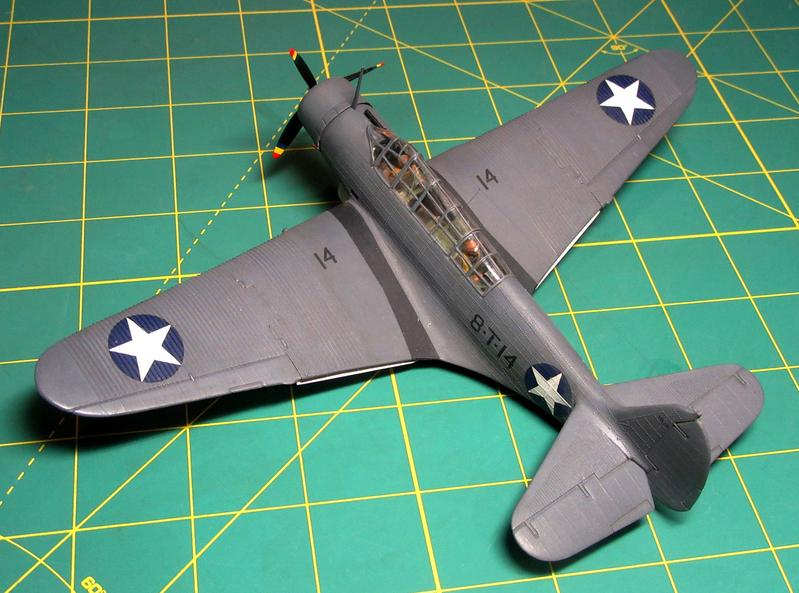 The main colors are on my A-6 Intruder. Next are detail painting and work on all the ordnance. 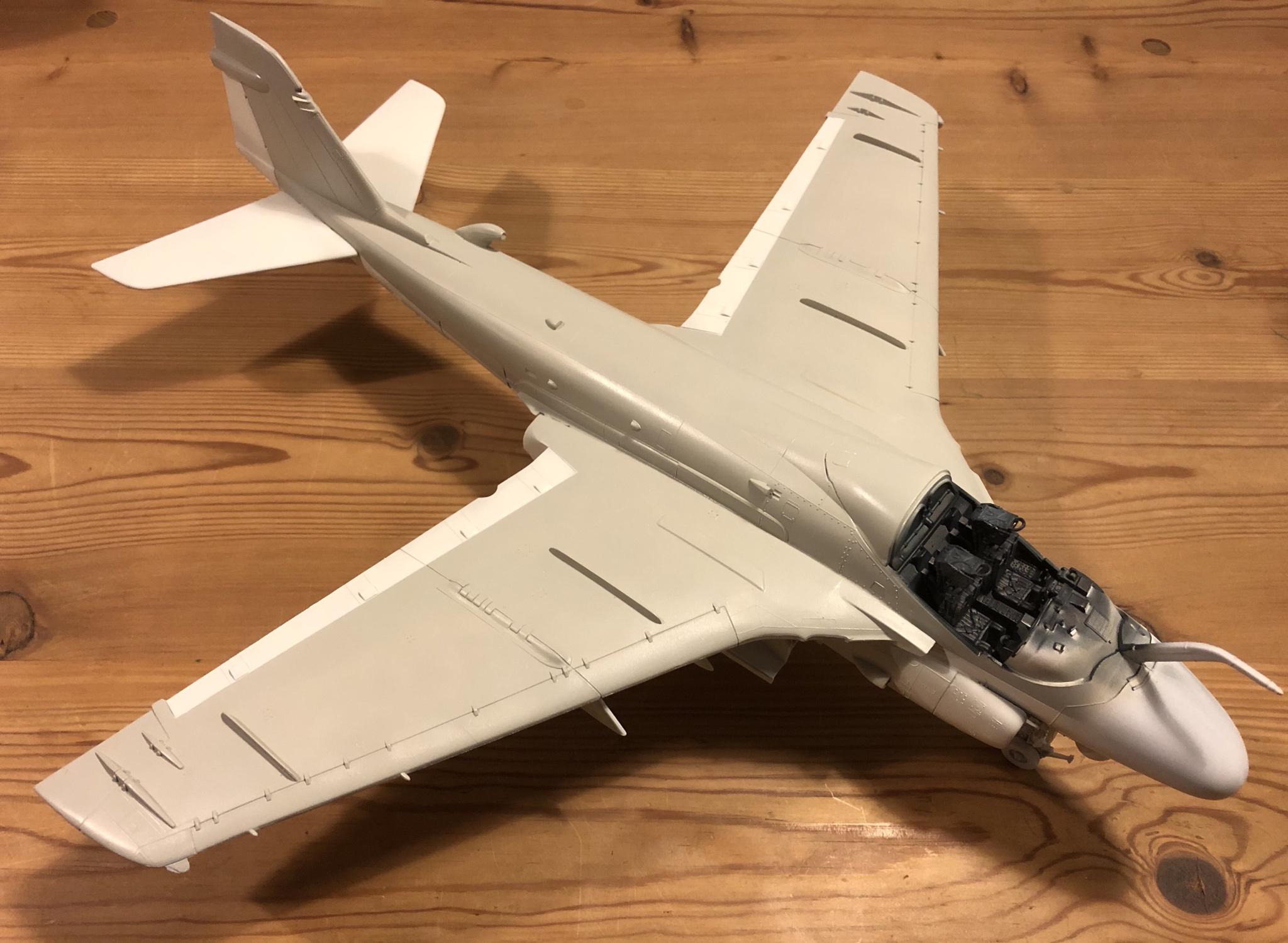 @ Jesper - your build reminds me of "Flight of the Intruder".....gripping novel by Stephen Coonts, excellent writer and Ex-USN pilot. Looks very promising so far

I made some progress on my RN Phantom, too

REPLY & QUOTE
SHAKY962 (Jose Miguel) said
Jesper: I love the intruder!!!
Oeter: Nice work in the Phantom
I´ll use my phantom for the specific campaign!!!

Oeter: Nice work in the Phantom
I´ll use my phantom for the specific campaign!!!

See you there, Jose, I have some other Phantoms in my stash for that campaign

Still not decided which one to build yet...

Lots of really nice builds here, and lots of different kinds of things, this has been a great campaign so far!

I haven't made a post here in a while, so here goes.

I've been toiling away on Trumpeter's Vigilante, and all I can say is that you have to really want a 1/48th Vigilante to work on this kit. As an early Trumpeter kit, it shows how far a company can go when they set their minds to it. That said, there is no excuse for the totally poor fitting kit they did of the Vigilante, given all the technology at their disposal at the time.

I do want a 1/48th Vigilante, and I was one of those that voted for it for several years in a row. So I shall continue slugging it out with this one. Though, my heart isn't in it right now. I will say, that as I work through it, one can see a Vigilante in there. So, here's where I got.

The cockpit is ok, though the instrument panel should have been thinned to allow one to see the really nice film that they included, and it did a nice job of fitting into the fuselage. I did beef up the interior seam line with 0.2 inch strip to overcome the unsupported area. This is a must, otherwise it will twist and turn all on its own!

Since all the pics I've seen of flight ready Vigi's on the ground/deck have the flaps in a neutral position, I glued the front flaperons, and rear flaps onto each wing half, and then joined both halves. This made it much easier to sand down and begin filling all the rivet holes made by the "Mad Riveter". Still this work entailed hours of work along with 40g of super glue to date.

Once I got things close enough, I went ahead and put the wings on. The intakes on the other hand have the worst gaps yet!

It should be noted that this kit isn't really all that hard, things do kind of fit. Good basic modeling skills are really all that are needed to make an inaccurate, but nice oob build. The killer is the overall poor fit, and need for every seam to be worked on in some way or fashion. I guess that I've easily put close to 60 hours into it, and the end is still some way off.

That said, and looking at the calendar, I'm changing horses mid-stream, and will relegate this bird to the Hangar Queen builds. Sigh...

A good back-up plan, and fun little build, that should get me into the mood for a Pearl Harbor 80th anniversary. A good campaign idea if I say so myself! Anyway, I'll update you all soon on this one!

Take care, and have fun 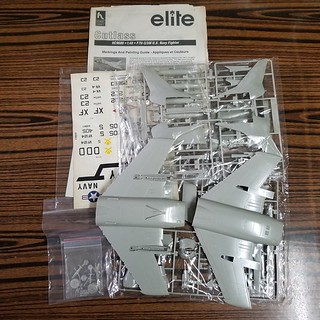 REPLY & QUOTE
md72 (Mark Doremus) said
Well,if you squint real hard you can see a tiny F-14 in there. 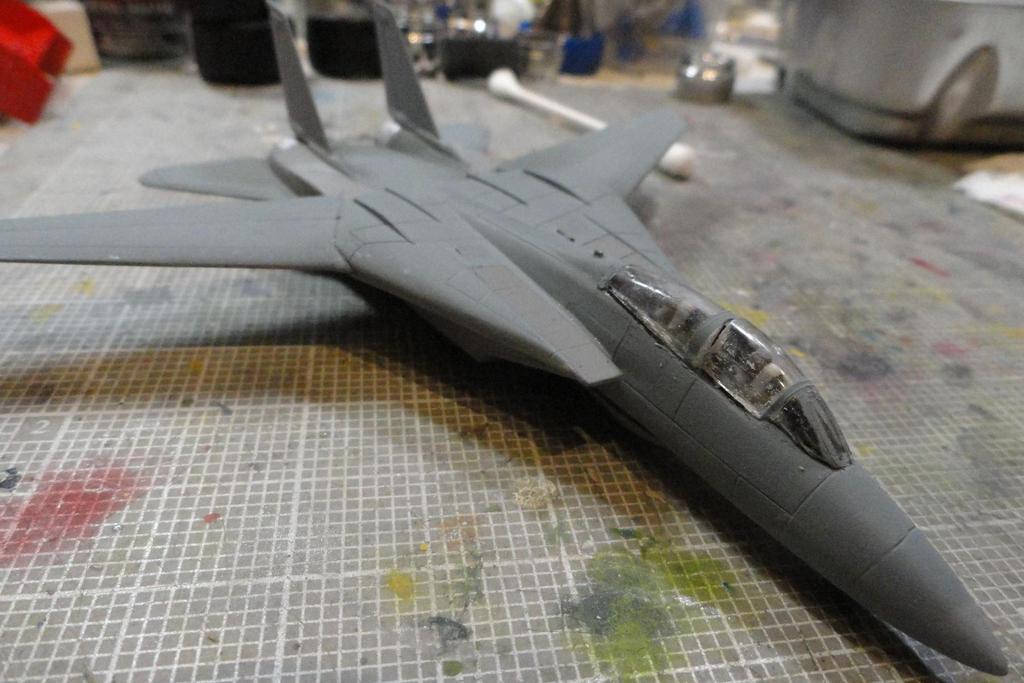 Well since making the change, I'd say it's quite a difference. I really do like the Hasegawa Zero series of kits in 1/48th. Mostly, I love how they fit and go together.

I have found that when I build these, I differ a bit from the instructions, mainly to save time on the build, and to avoid a lot of filling. First thing I did was paint a lot of the internal parts, and areas on the fuselage.

Next, I go ahead and close up the fuselage, and then add the front upper part. I found that the cockpit can be inserted from underneath, and this sets me up to have a near perfect fit for the wings.

Then the upper halves of the wings are attached using clamps. This is quite easy as there is internal mating parts on the fuselage and wings that allow for paper clamps to connect and allow for a near perfect fit!

I also glued in the wheel well attachment, and drilled out the lightening holes on the seat. By their engineering they are a fast build, this method I've found is even faster! Two evenings, about three hours so far, and this also includes some research on paint schemes! All that, and it's a fun kit to build.

Next up, some sanding of seams, and the cockpit. For this build I'll be adding a little bit of extra things, and so far having a blast!!

I made more progress with my Phantom

I have made some progress on my A-6 as Well. Still some detail painting and touch ups to be done. Then it is time for a light weathering 🙂 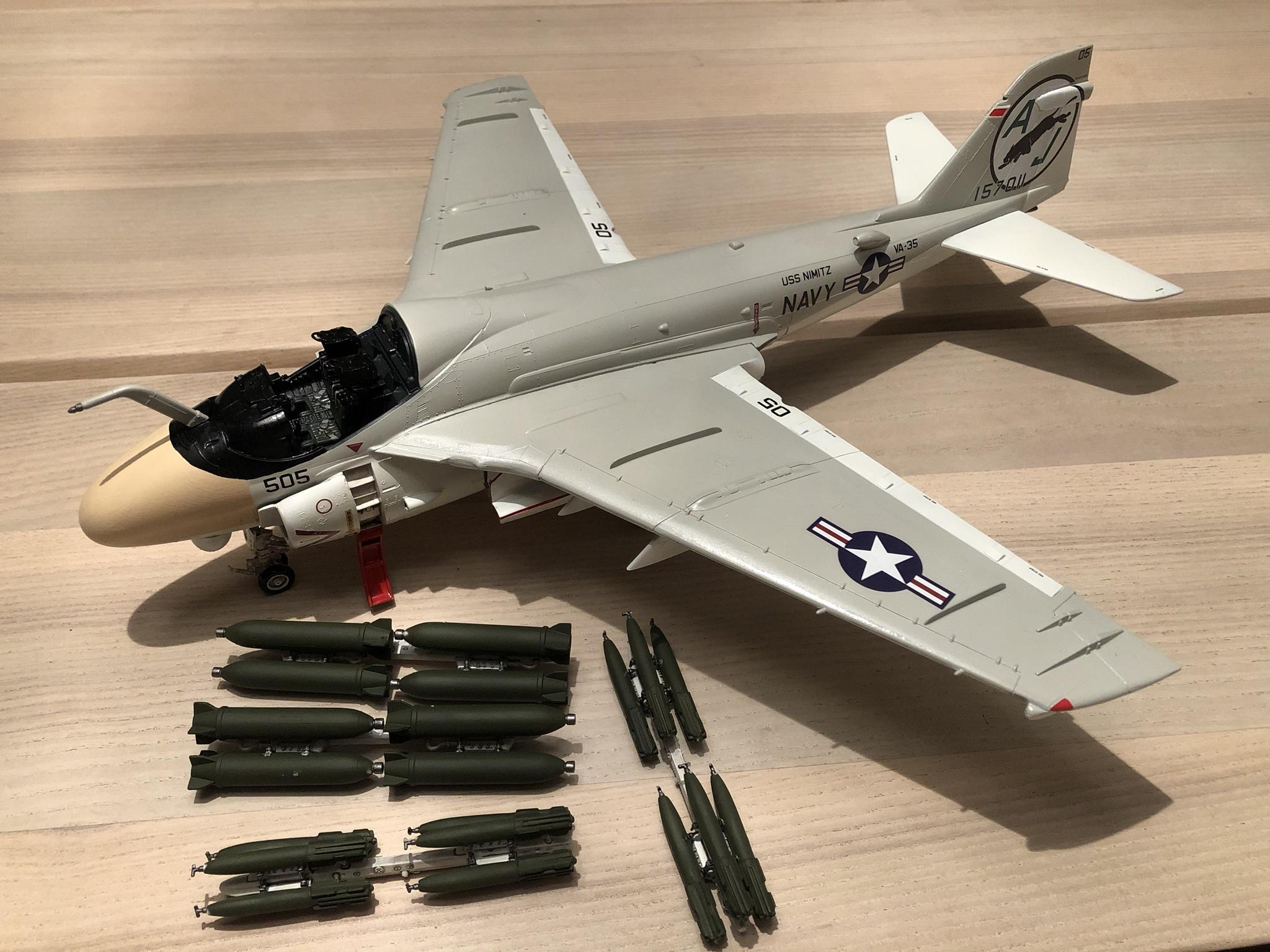