You are viewing the archived version of the site. Go to aeroscale.net for the current dynamic site!
mainAir Campaigns

REPLY & QUOTE
brekinapez (Shell Bush) said
I am coming in with this, as it is stupid to have a Raiden, Tojo, Oscar, and George on my shelf but no Zeke. 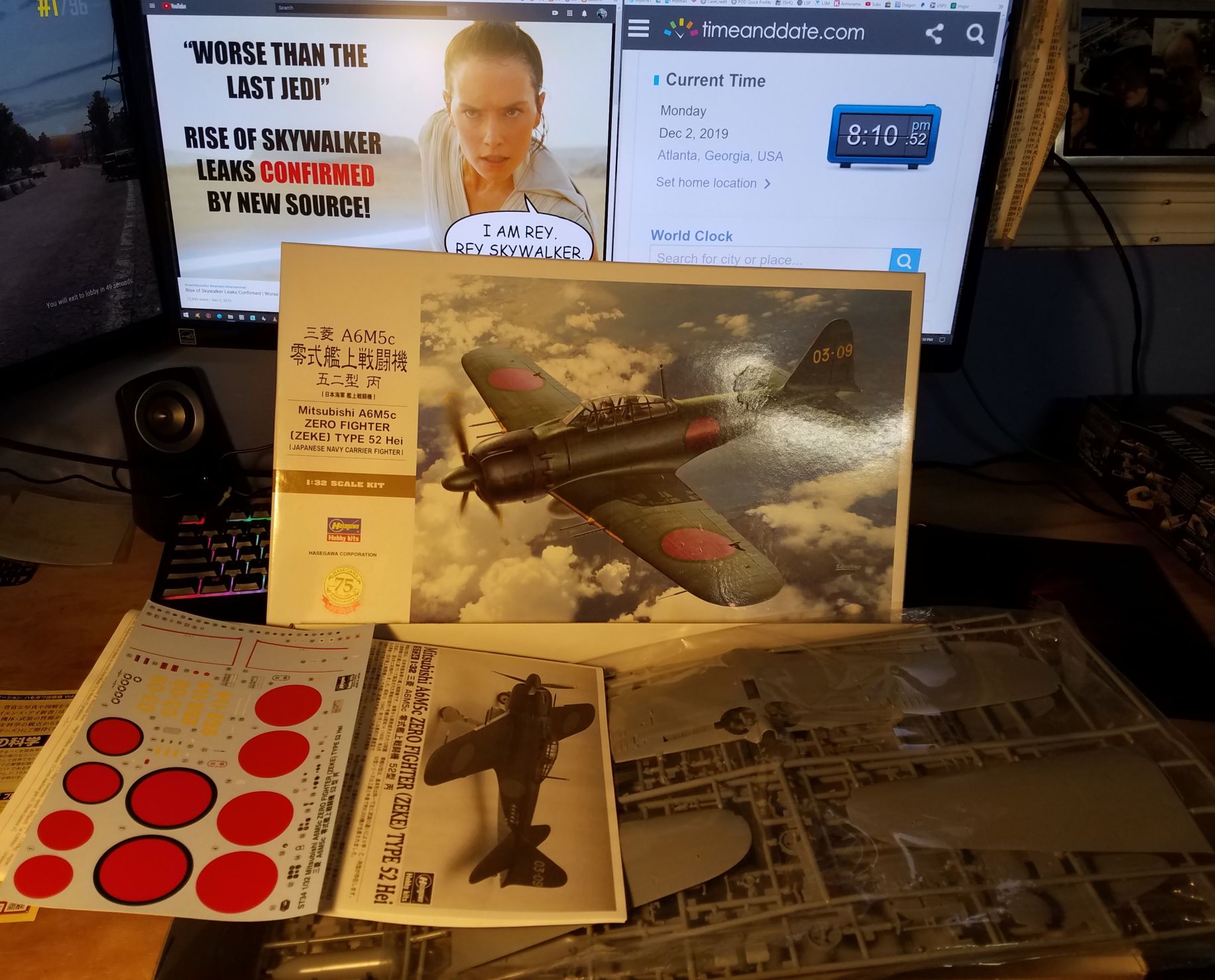 I am coming in with this, as it is stupid to have a Raiden, Tojo, Oscar, and George on my shelf but no Zeke.

These are really good kits!

REPLY & QUOTE
steviecee (steve clark) said
I'm going to build the Akitsu Maru, an IJA transport that had a flight deck added in 1944 so it could be used as an escort carrier. The Japanese army flew Stellas carrying depth charges from it to try to keep US subs away from the convoys. It was sunk by the sub Queenfish.

REPLY & QUOTE
Bigrip74 (Bob R.) said
Steve, who makes that kit? I would like to try and purchase one.

REPLY & QUOTE
md72 (Mark Doremus) said
I wasn't surprised that when I scaled sown from 1/72 to 1/144, I'd have to use smaller tools to get things done. What totally surprised me was that the size of the gaps didn't scale at all.

Some progress, I've almost got the whole fuselage together. All I'm missing are the intakes. 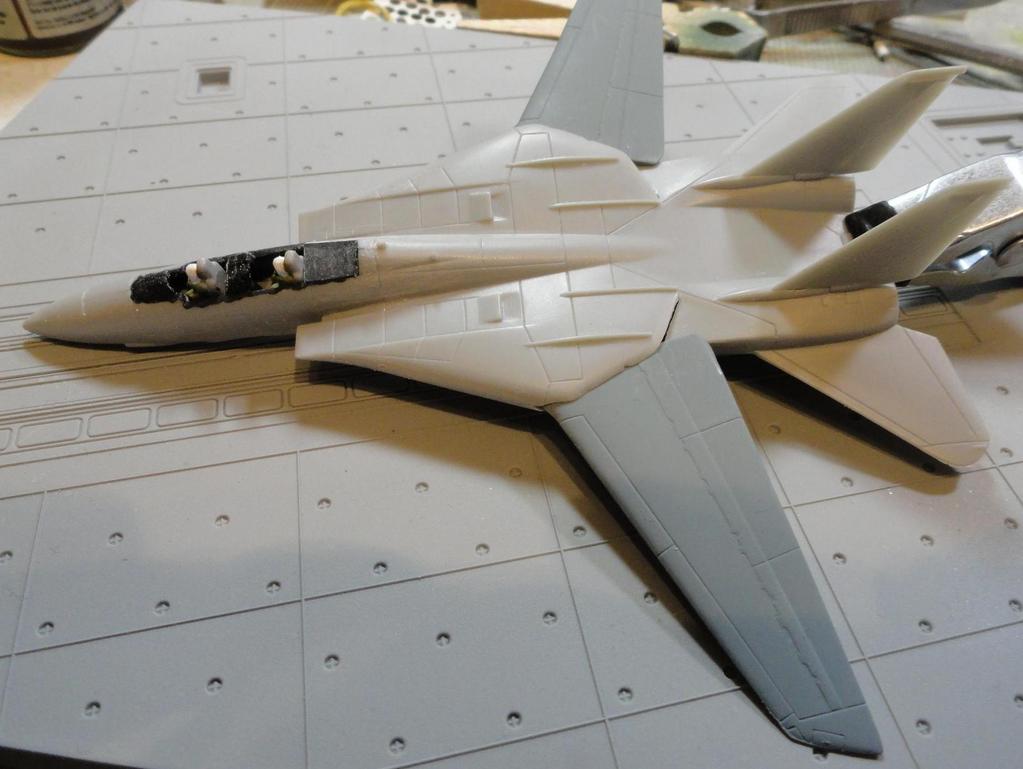 Gotta start filling some gaps once I get the beaver tail finished up.

REPLY & QUOTE
McRunty (Rory Snell) said
Update time. All the hanger deck aircraft are now complete. They very much fall into "Nice from Far, far from nice" category. This is due mainly to the aircraft being modeled in brittle clear plastic. Luckily, the dark hanger deck hides a multitude of sins and provided a way for me to do 'test' builds on them.

All ready for installation.

All nice and cozy in their new home. You can see some issues. Especially on the CH-53E's. Broken rotor blades and missing refueling probe on one. Luckily, none of that can be seen once the flight deck goes on. 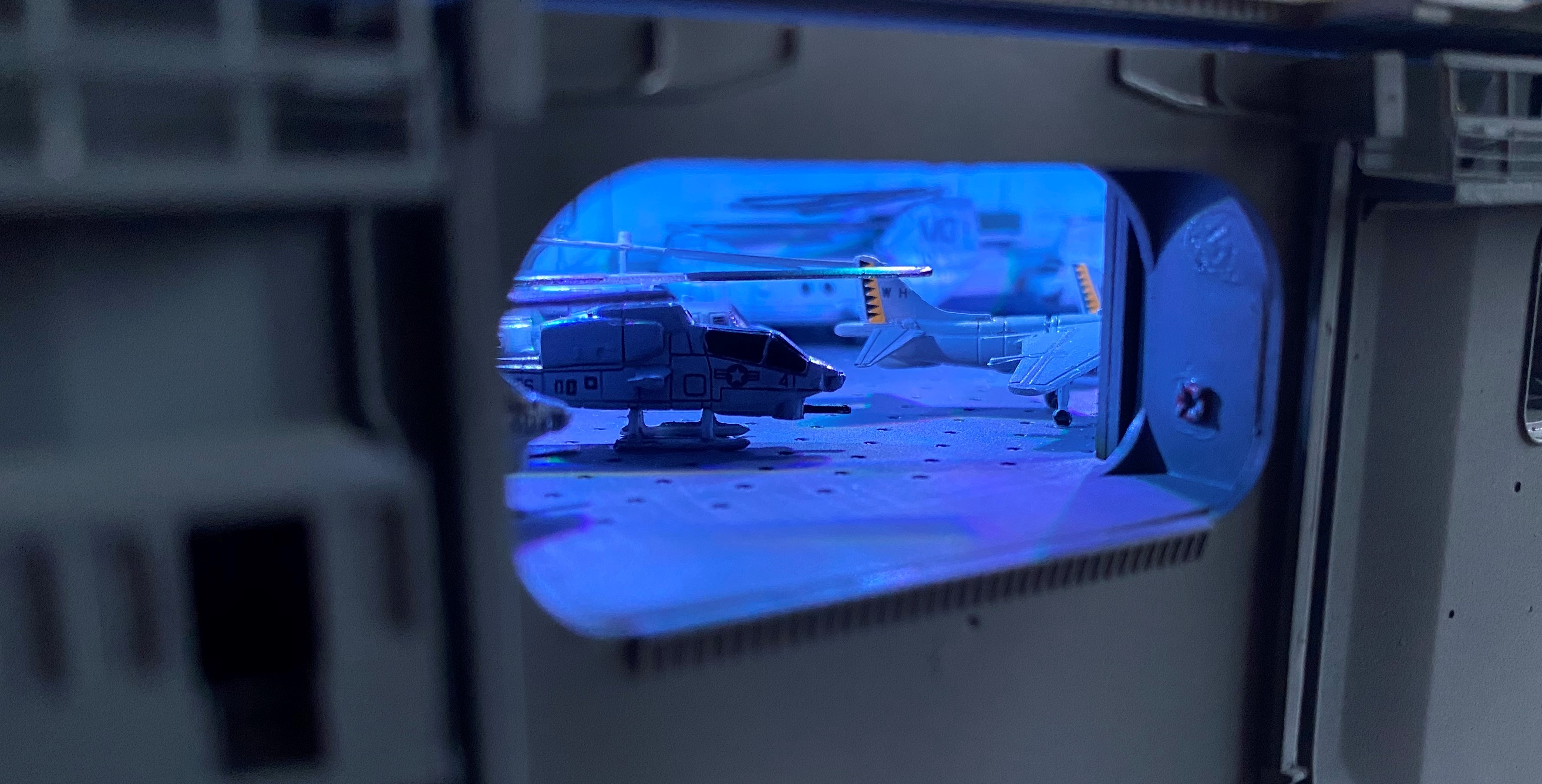 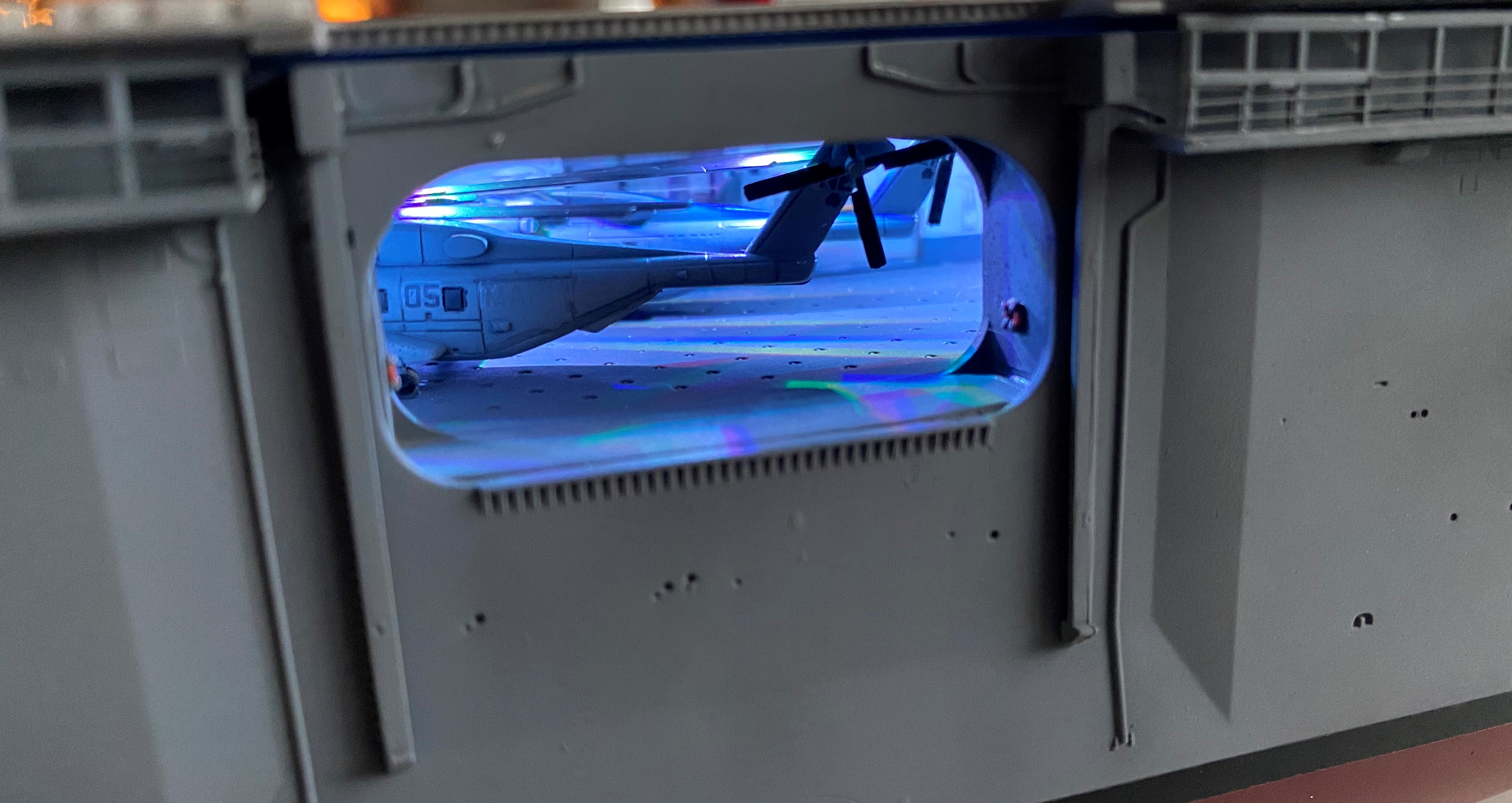 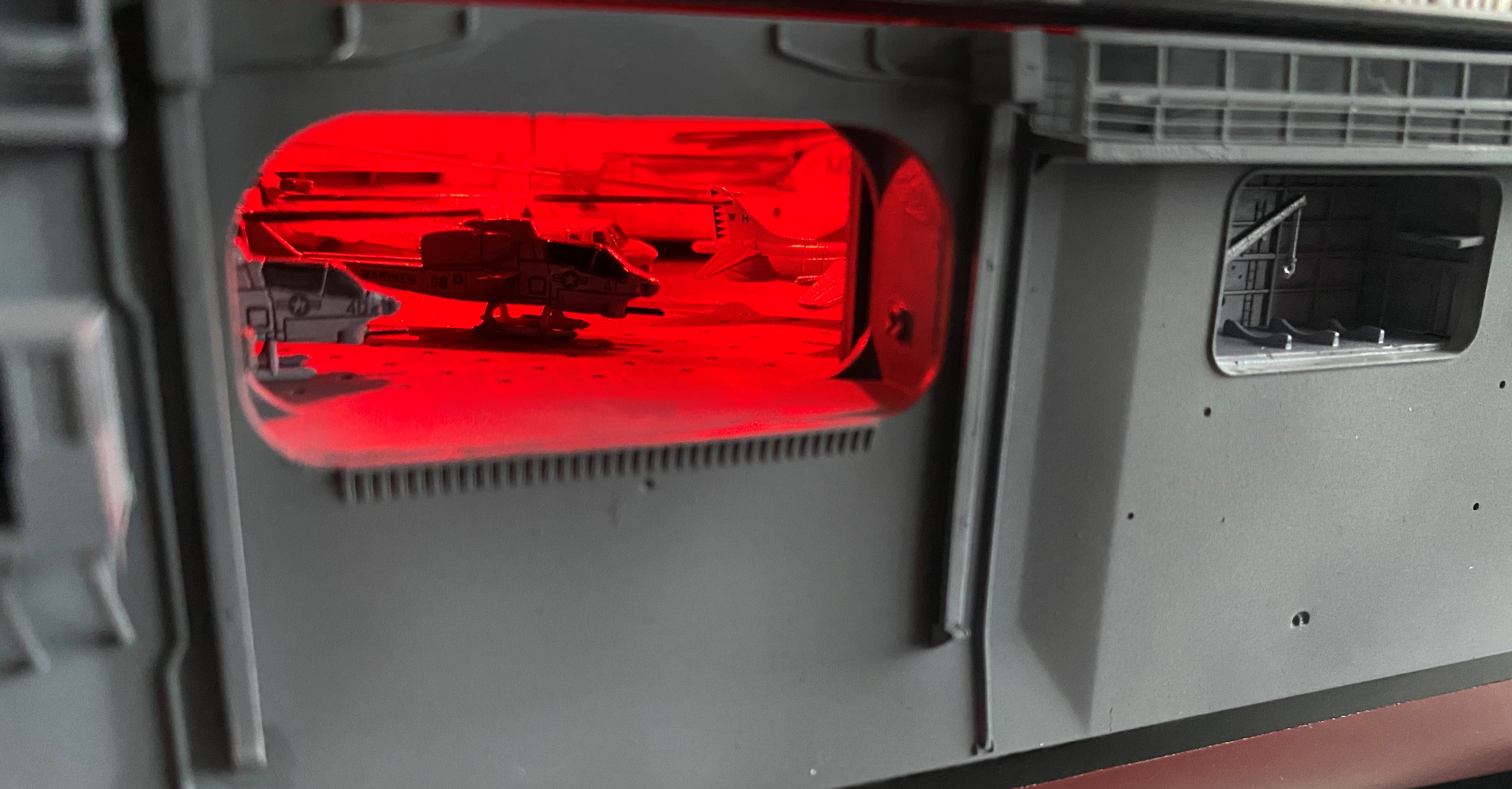 Lights went in really nicely but I have noticed they are somewhat blue tinted when set to white which is annoying. Still, she looks good so far. Flight deck is also on and glued down.

all the sprues laid out

The main superstructure assembled and the main deck, hull halves and bottom cleaned up

I am building an A-6E Intruder for this campaign. It is the 1/48 Revell kit. Looks good, but time when tell when I get started.

It will still be a bit of time until I get started. More to follow

REPLY & QUOTE
Illini (Dave Shick) said
I am thinking of doing the 1/350 Merit Enterprise CV-6 and using a very extensive update set from a company I only learned of today called INFINI. Is anyone familiar with this company and the quality of its products?

In Progress shot on the Dragon 1/144 Tomcat 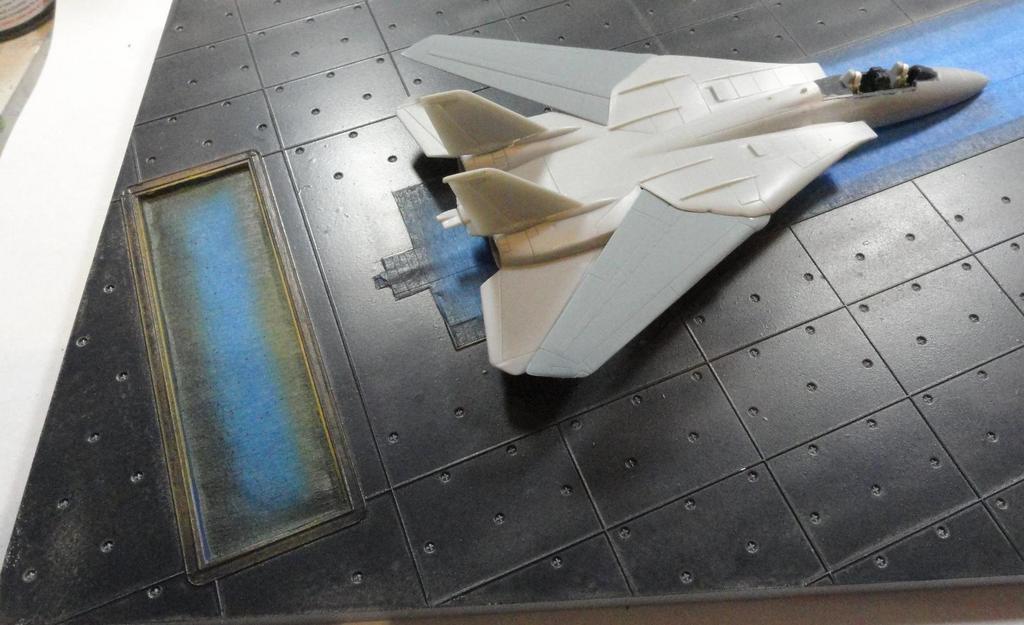 REPLY & QUOTE
Illini (Dave Shick) said
After some sane thought, I concluded the CV-6 was too expensive and too long an project for this campaign.

So, I decided to build the Tamiya 1/32 Vought F4U-1A Corsair with add on goodies. Still an ambitious endeavor. However, I can always scale back to the kit pats if the Brassen inteior and engine prove to be too much.

REPLY & QUOTE
McRunty (Rory Snell) said
A month has gone by and I have finally fully completed the main hull. Just the superstructure and airwing to go. 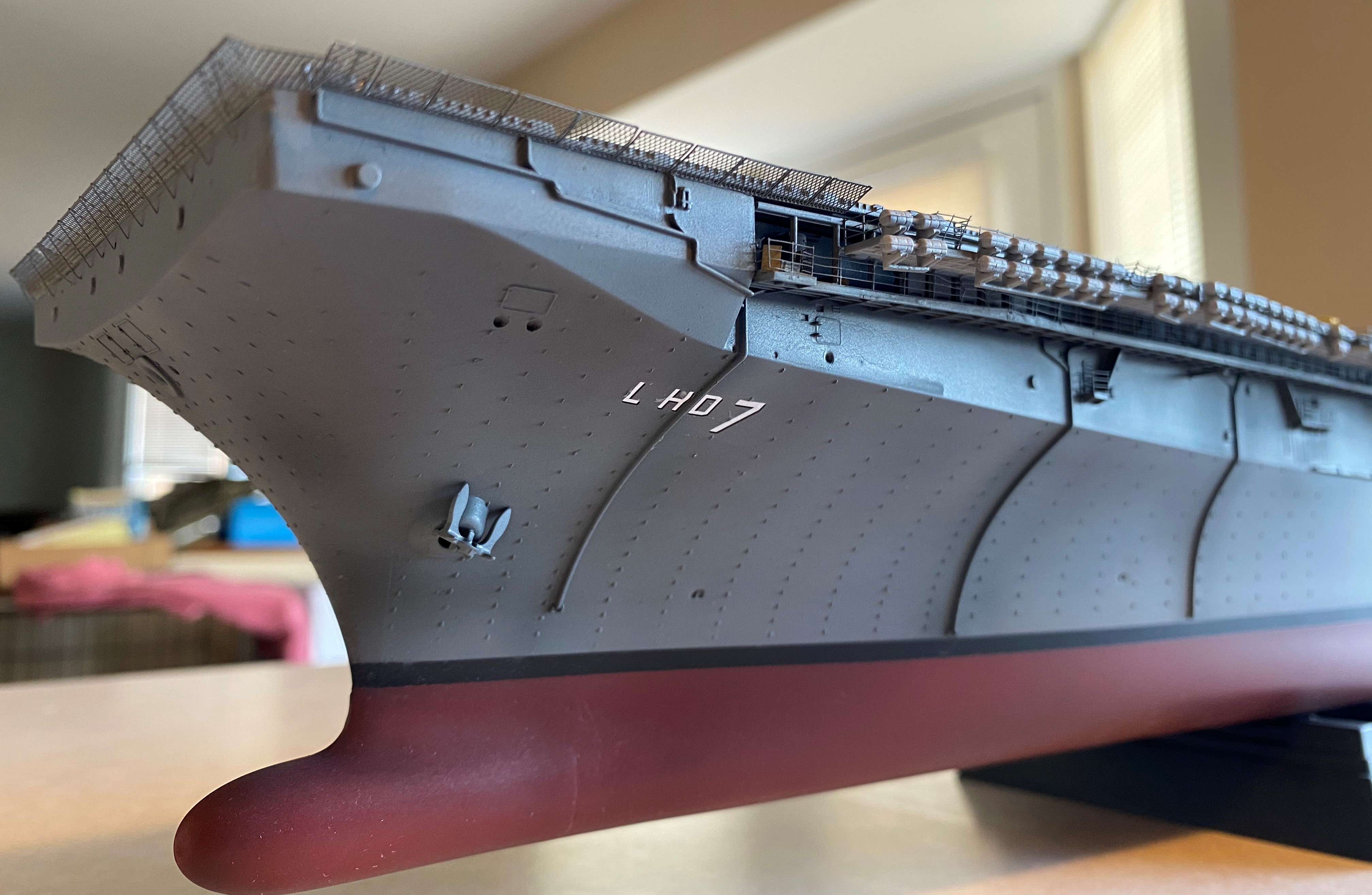 I am thinking of doing the 1/350 Merit Enterprise CV-6 and using a very extensive update set from a company I only learned of today called INFINI. Is anyone familiar with this company and the quality of its products?

While I haven't actually used any of their products I do have some in the stash for future projects. What I can say is just from a visual perspective it looks good. Etch is very well defined and is a good thickness. Resin parts are also well cast and crisp.

REPLY & QUOTE
Illini (Dave Shick) said
I was told by someone on Armorama that my pictures aren't visible, so I'm adding my original kit photo again now from a different source. Hope you can see it. Let me know if not.

I decided to not use the Brassin update sets, too much for my meager skills. 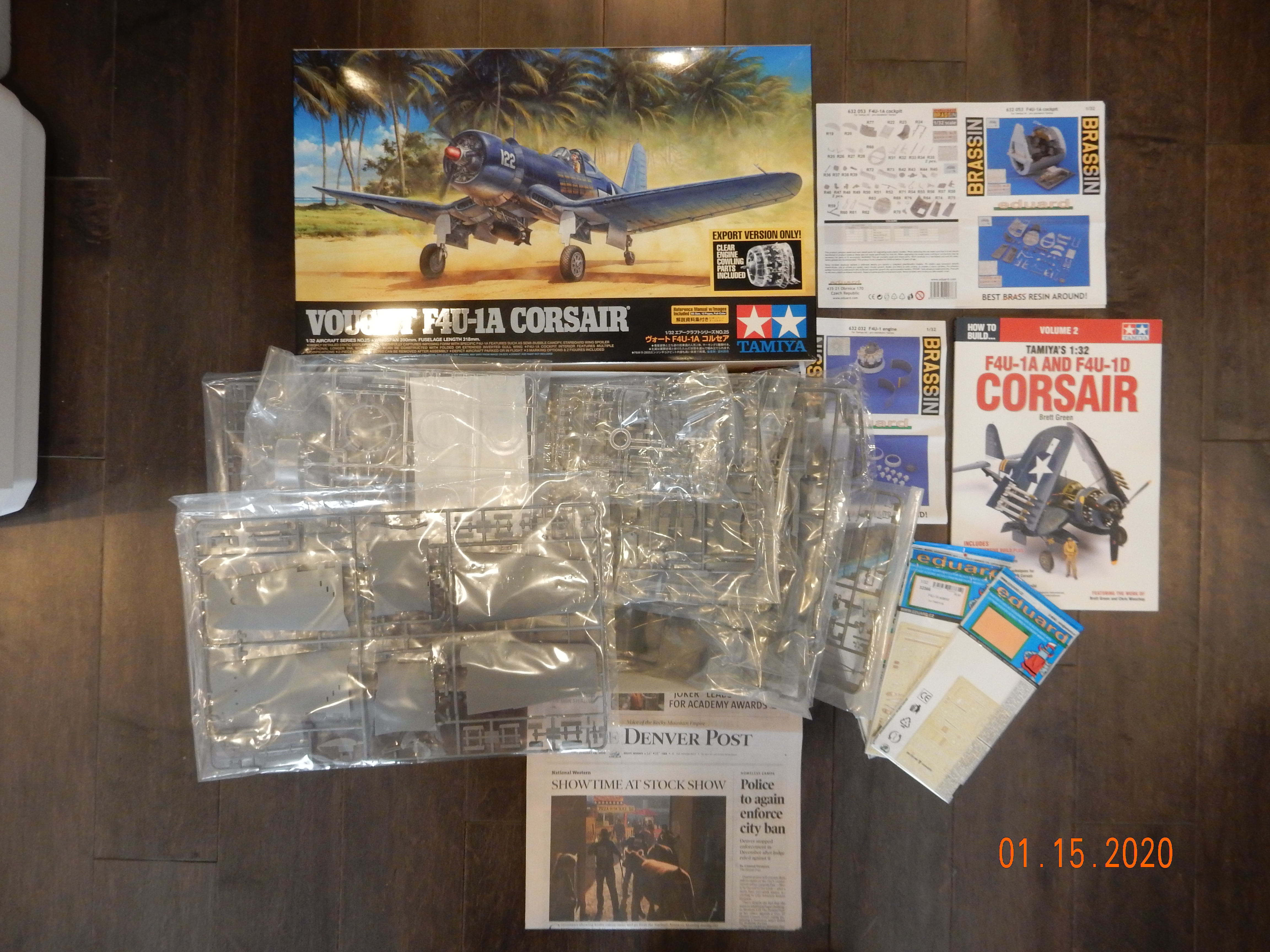 REPLY & QUOTE
McRunty (Rory Snell) said
This will be my final update before the completed model is displayed. I have been working on the airwing. 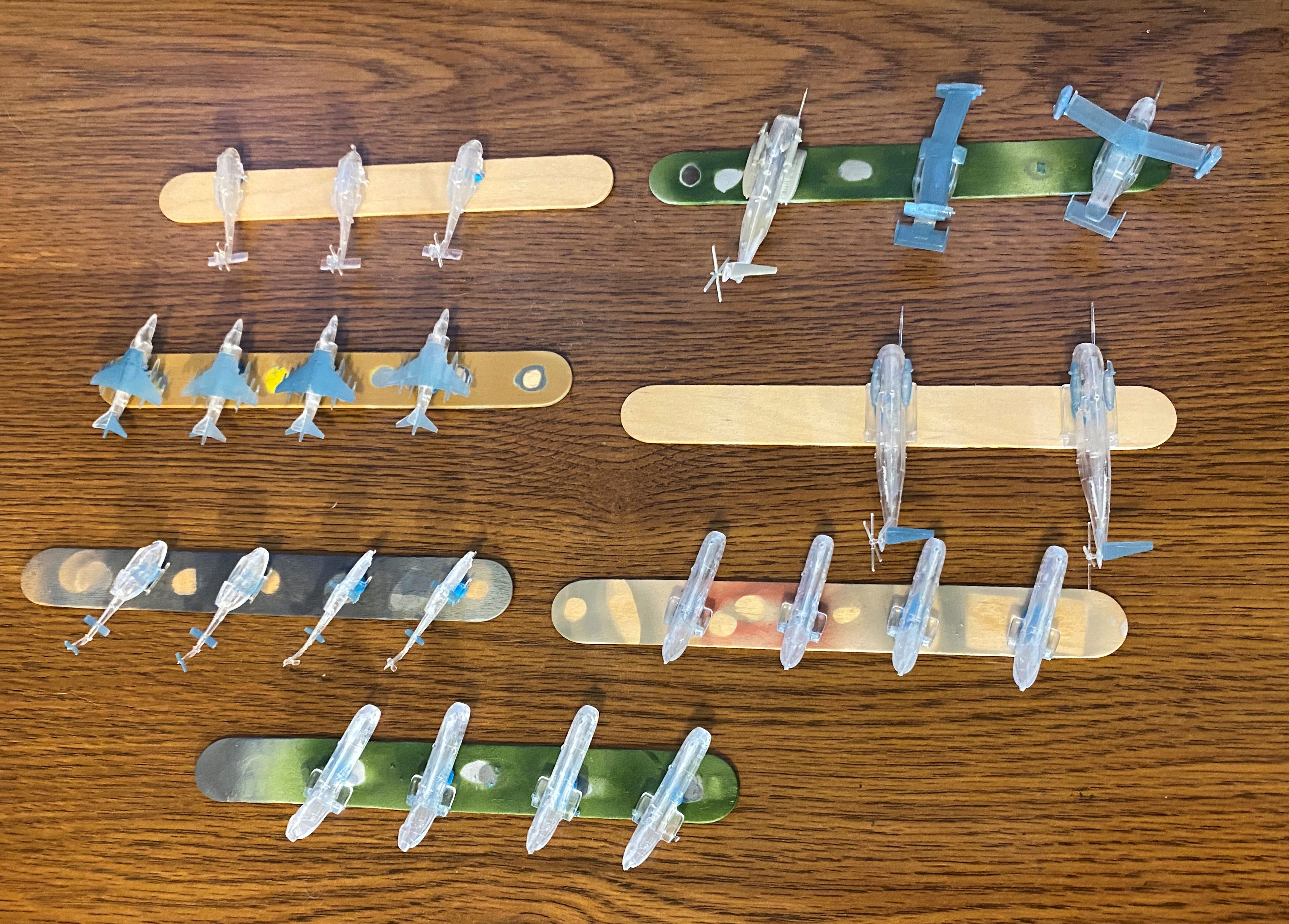 The on deck airwing will consist of the following assigned aircraft:

Other aircraft present. Not assigned so just visiting:

REPLY & QUOTE
McRunty (Rory Snell) said
And completed. Took me just over 3 months which for me is a record. Really enjoyed this build but wont be doing a carrier again for quite some time! Images are up in the gallery.

REPLY & QUOTE
Illini (Dave Shick) said
Progress being made on the F4U-1A. I tend to jump around and do sub-assemblies so I don't get bored. Lots more painting and weathering on both

I decided to take part now with this kit: 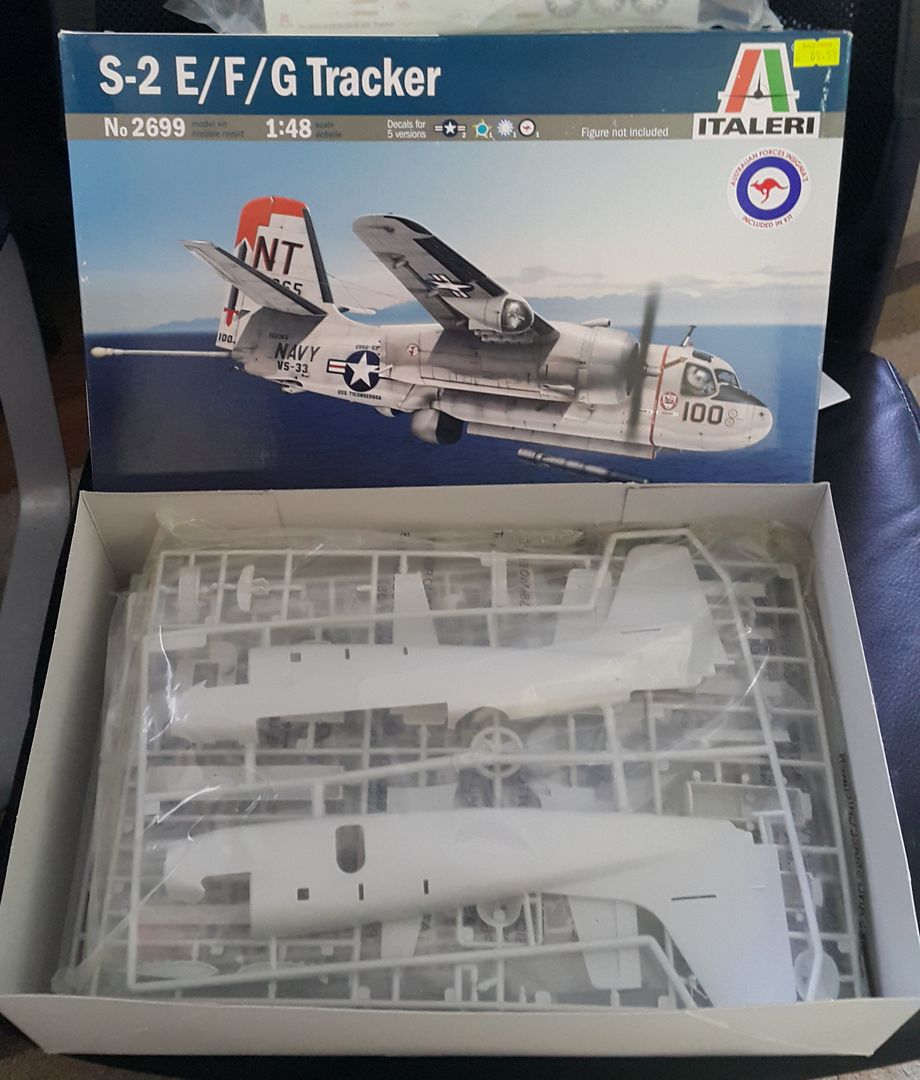 Have had a quick look today, and it's pretty basic, and I would prefer to put a bit of aftermarket stuff on, but the budget will not be extending to that sort of thing for a while so OOB it shall be.

REPLY & QUOTE
Pave-Hawk (iain) said
Work is well underway on my Tracker. There are quite a few corners that have been cut with this kit in terms of detail but hopefully I can turn it into something decent.

The cockpit is quite basic and rather dark once it's all closed up so it just got a quick and dirty paint job. 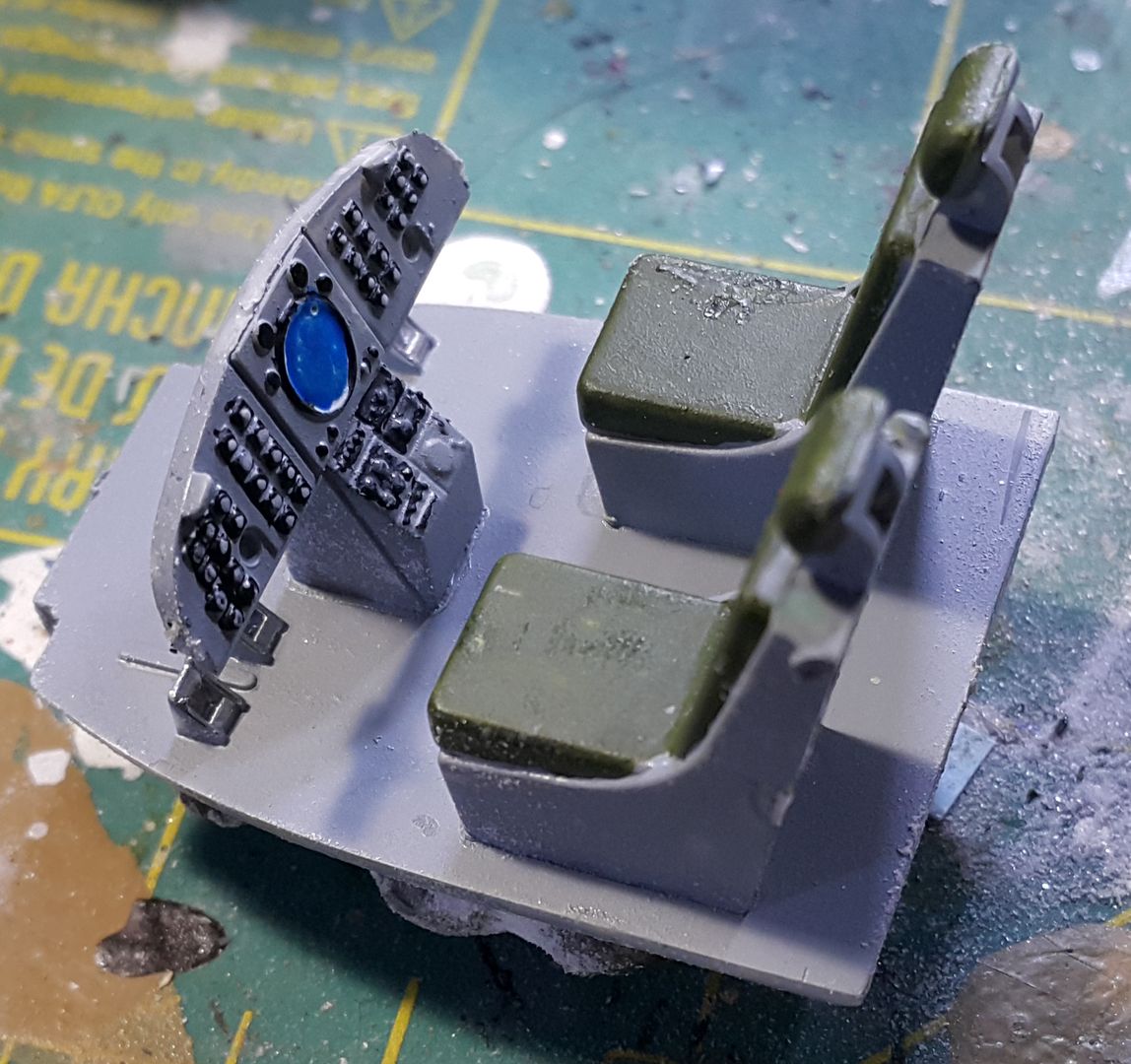 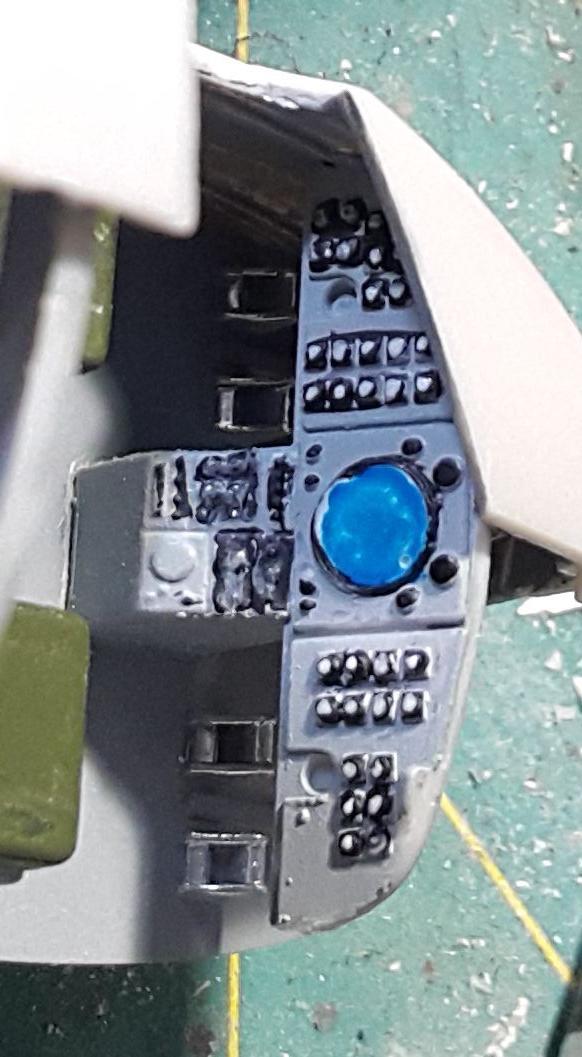 The instructions call for 50g of weight in the nose cap to prevent tail sitting but there is not nearly enough space in the nose for that much weight, so I started cramming lead sinkers wherever I could hide them, mostly under the cockpit floor around the nose gear bay, with a few behind the rear cockpit wall and even some bits inside the pilots seats and behind the instrument panel. 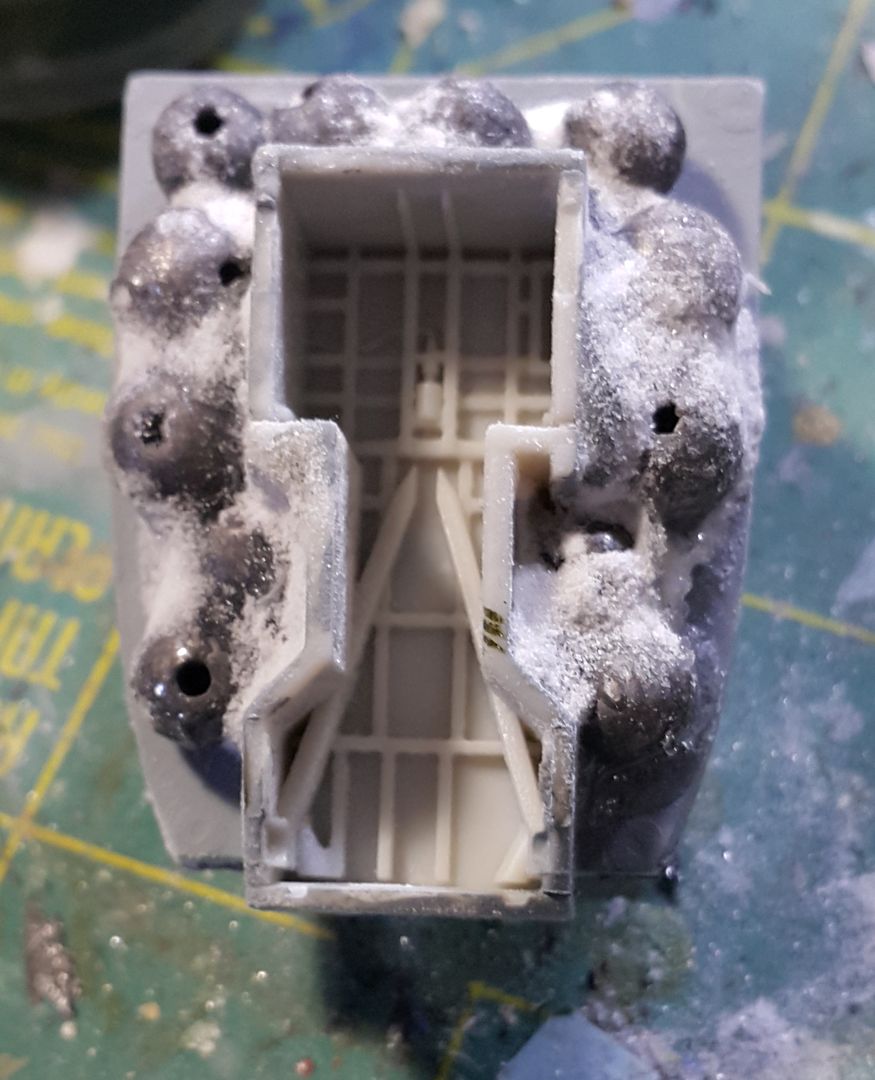 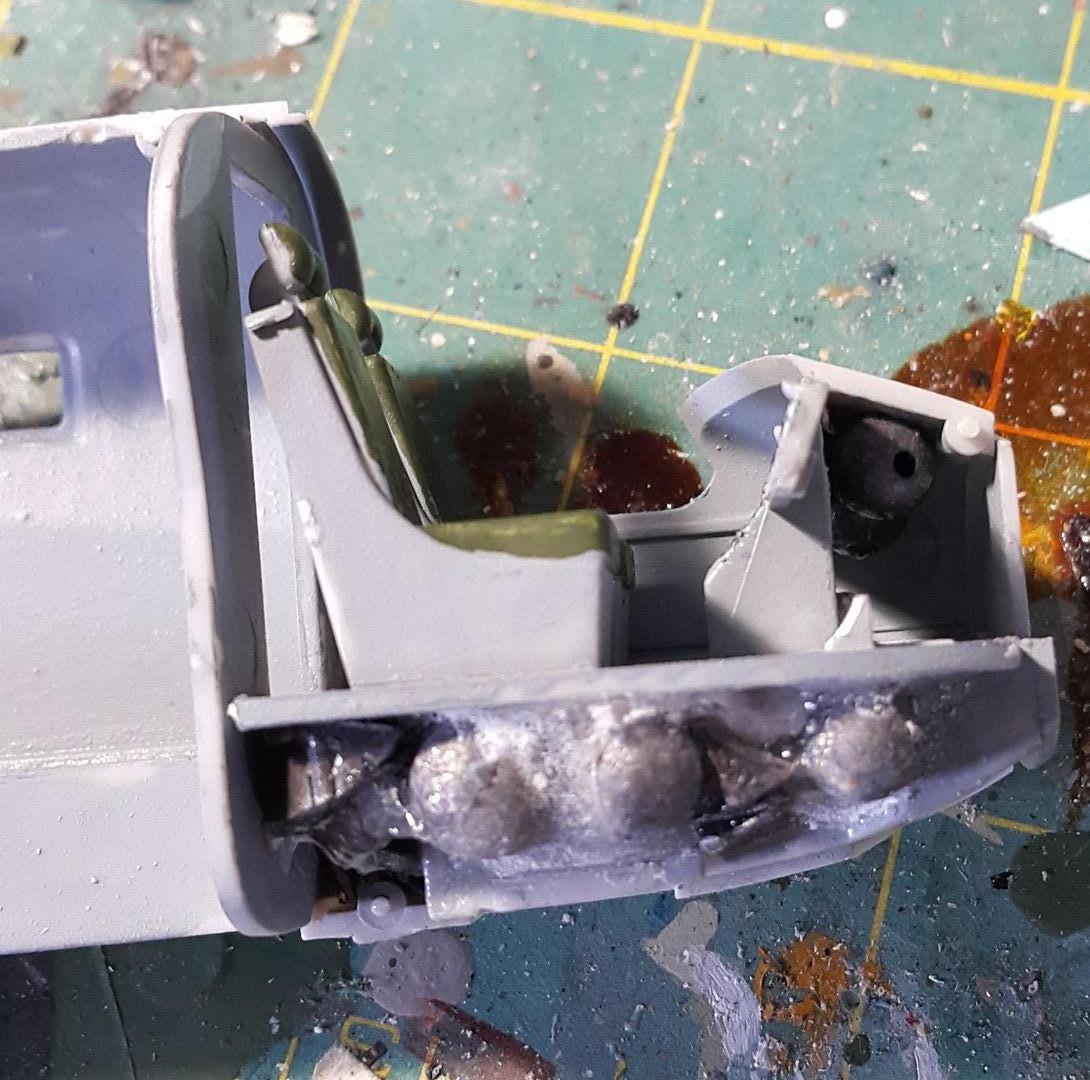 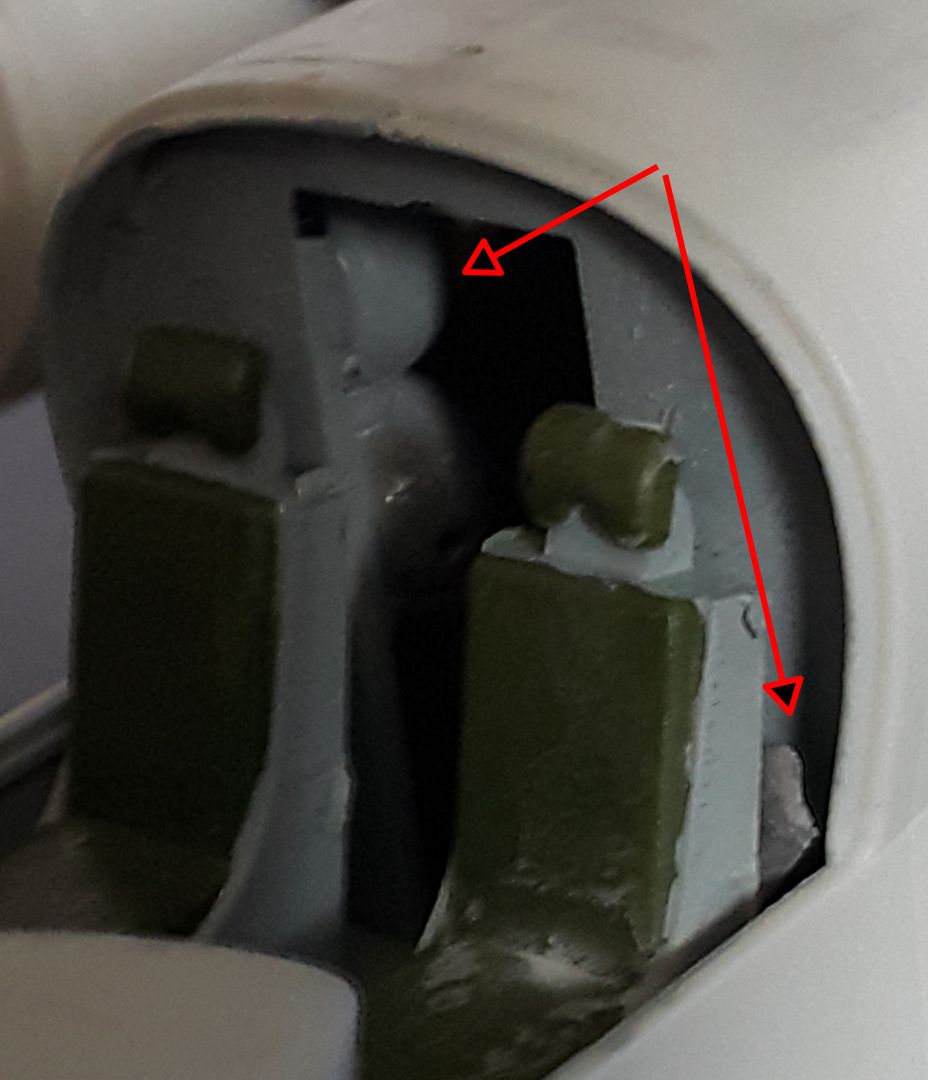 Even the engine got some weights 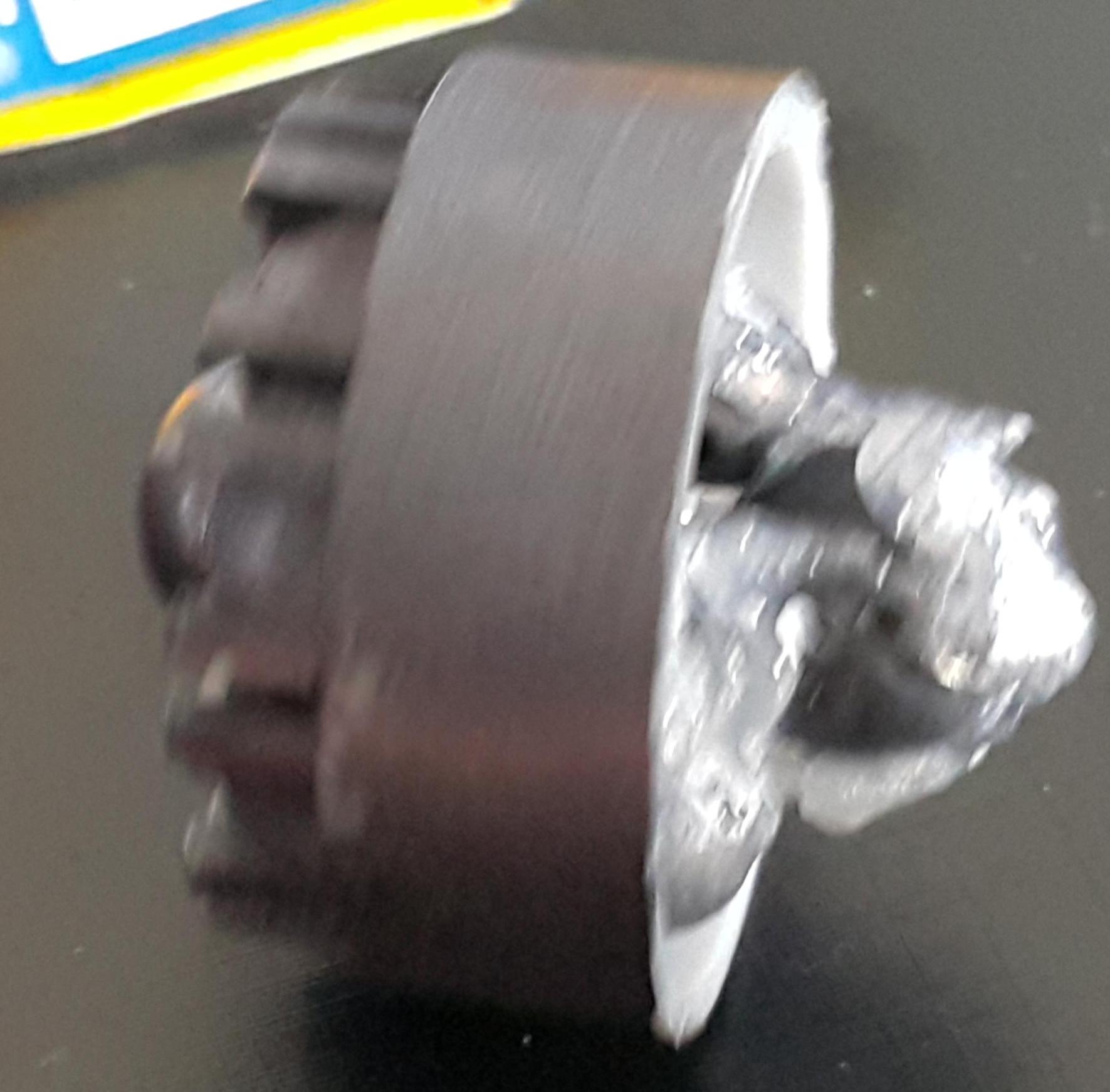 One challenge came with painting the deployable radome, as it's partially obscured. First problem was the hole was not large enough to fit it deployed, so careful sanding and test fitting got the hole fractionally larger than the radome. Then I painted it before assembly and covered it with stretchy masking film as that should be removable without leaving a residue once the fuselage is finished. Something that's apparent, even installed in the "deployed" position it still doesn't look like it extends far enough compared to photos of the real thing. 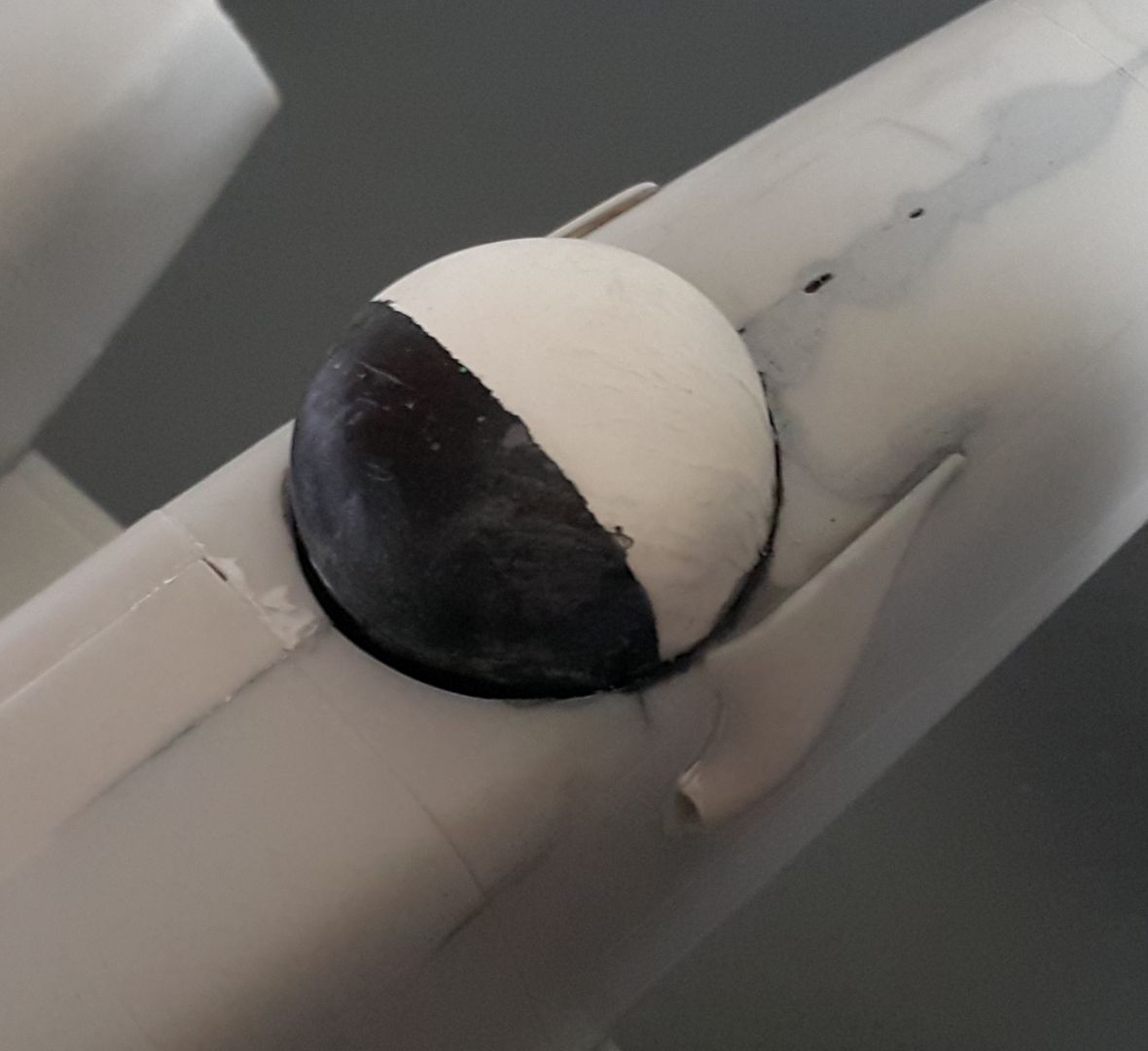 Since shelf space is at a premium I decided to go with the wings folded option, and while not perfect there is some detail provided for the wing fold mechanism.

The wing mounted search light really stands out with its total absence of detail as it is just a flat panel with a clear dome over it. So this got some attention, first I dremeled it out to give it some depth 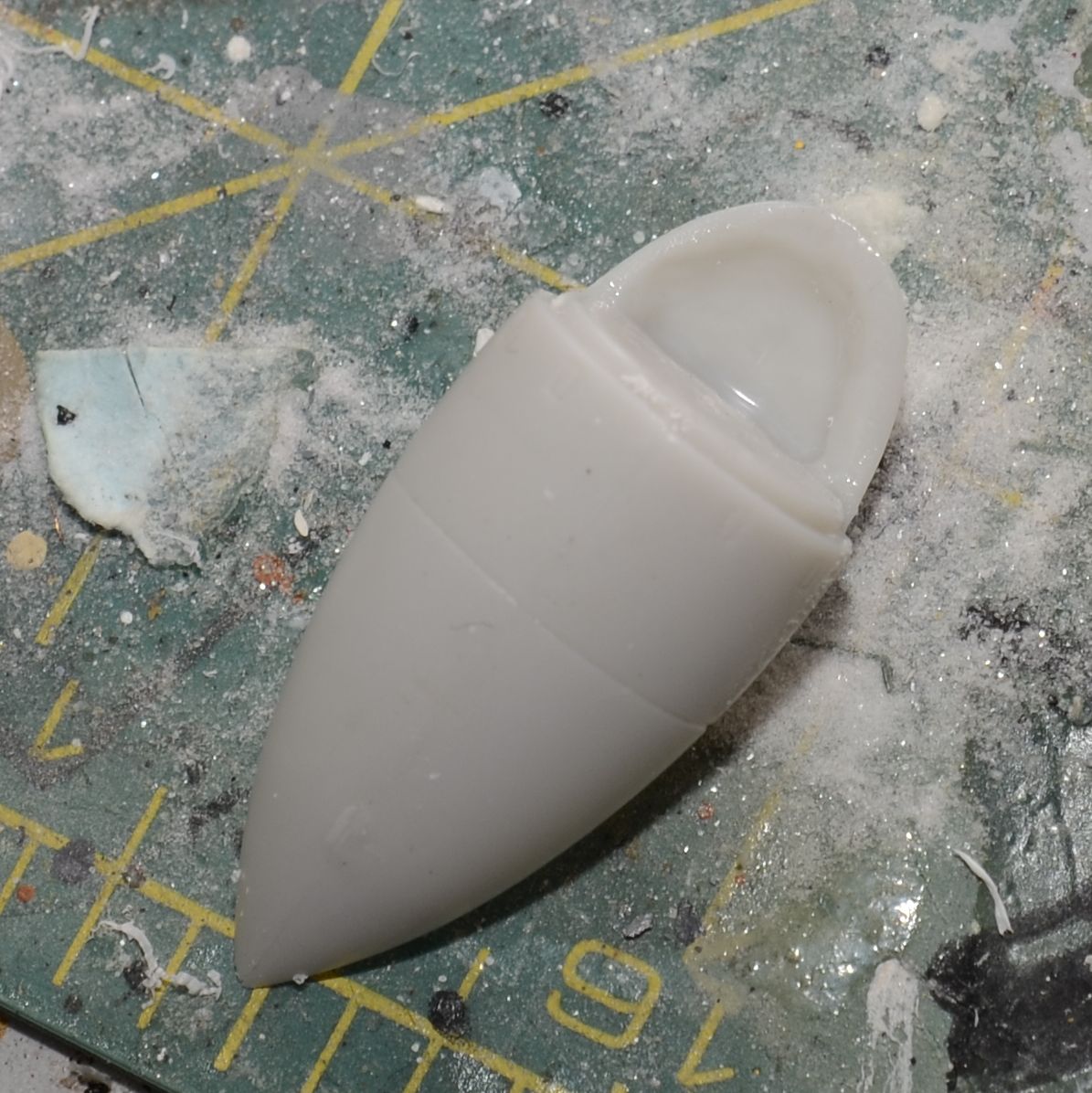 and using a domed head bolt, silicone putty, and a household iron I created a plastic dish for use as a reflector,
and the whole area was painted black to hide the crimes. The reflector will get a chrome silver coat once everything else is finished. 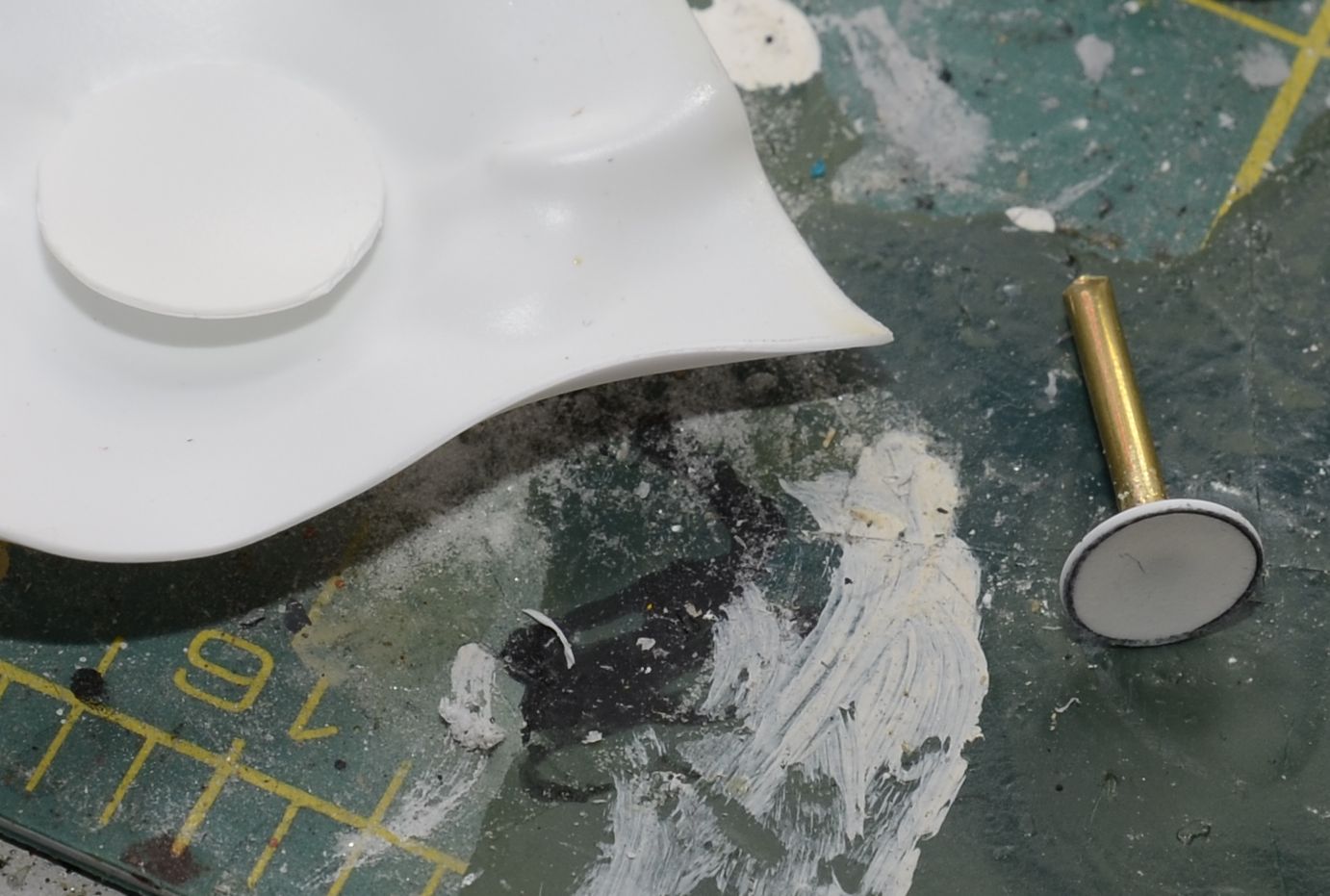 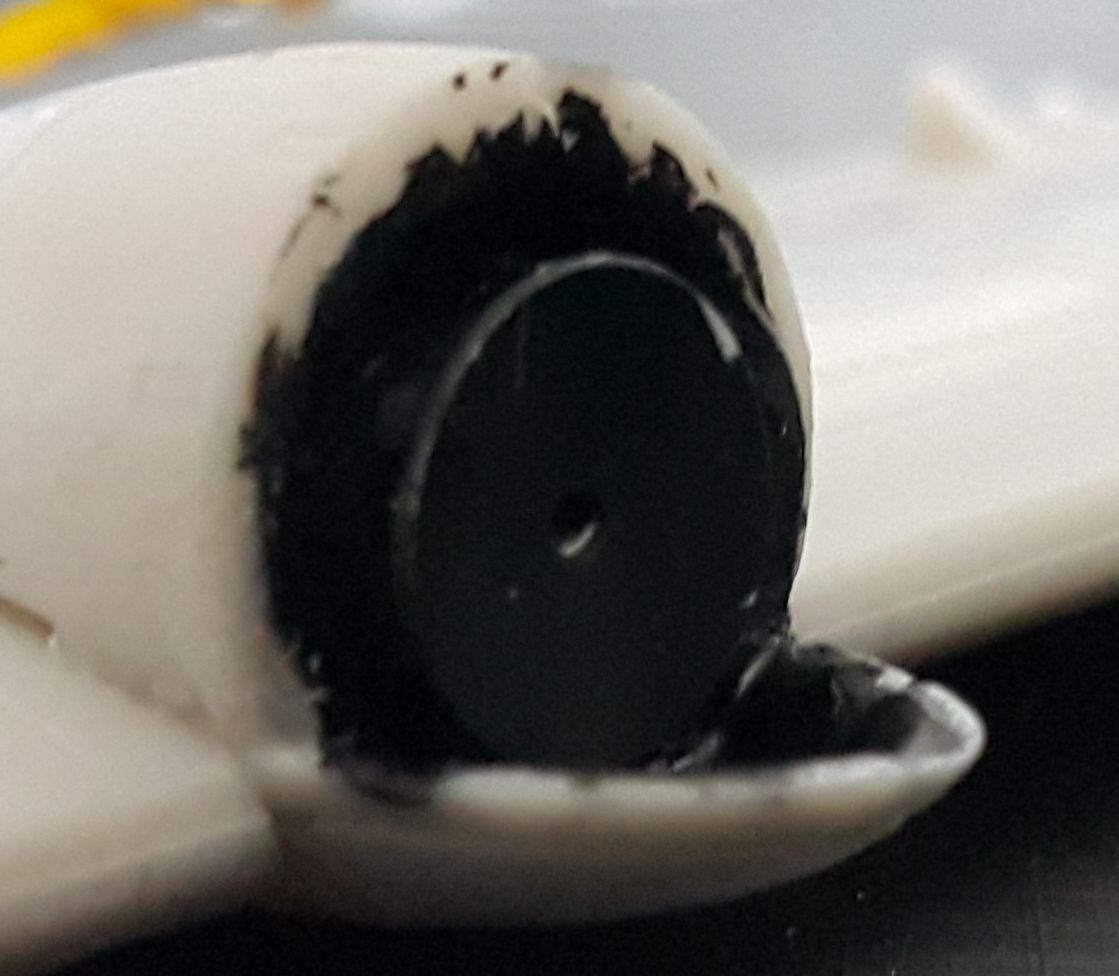 I would have liked to to leave the munitions bay open but there was zero detail in there and the torpedos are pretty lacking as well, so I sealed it up.

Currently in the process of adding the little detail pieces, and primer should go on soon.

@Peter, the Airfix Phantom has been in my wish list for a long time. Looking forward to see how it looks.


I'm going to attempt a helicopter for this campaign. The SH-60B Seahawk of the US Navy.

I have started dry fitting the cabin. I does look OKish, perhaps a bit too simple.