You are viewing the archived version of the site. Go to aeroscale.net for the current dynamic site!
mainGeneral AircraftTips & Techniques

REPLY & QUOTE
pbennett (Paul Bennett) said
I want to model a Japanese Kamikaze aircraft to show it banking to the left and entering into a dive. My question relates to the various moving surfaces on the aircraft. In such a situation, would the following be the correct combination: left aileron up, right aileron down, rear elevators down, rudder to the left? Presumably the adjustment of these surfaces would be fairly slight.

REPLY & QUOTE
Namabiiru (Mark C.) said
Paul,
If memory serves, the rudder is generally opposite the turn (i.e. left-hand turn means right-hand rudder), but it would depend also on exact maneuver the pilot is trying to execute. In this case, if he's trying to get the nose around quickly without concern for maintaining altitude then he might very well put in left rudder.

As the pilot transitions from level flight to a dive, then the elevators would be deflected down, but once he achieves the desired dive angle he would again center the stick (fore-and-aft) to zero-out the deflection of the ailerons.

It's been decades since I had control of an aircraft so perhaps someone more current can correct me/explain it better.

Your ideas about the control surfaces sound about right; the situation would have been so dynamic that you could even get away with some fairly extreme control inputs evident. In fact, that might be better to get the dramatic message across more powerfully.

By the way, I've modeled a similar scene, but from the 1/1200 scale sailor's perspective: 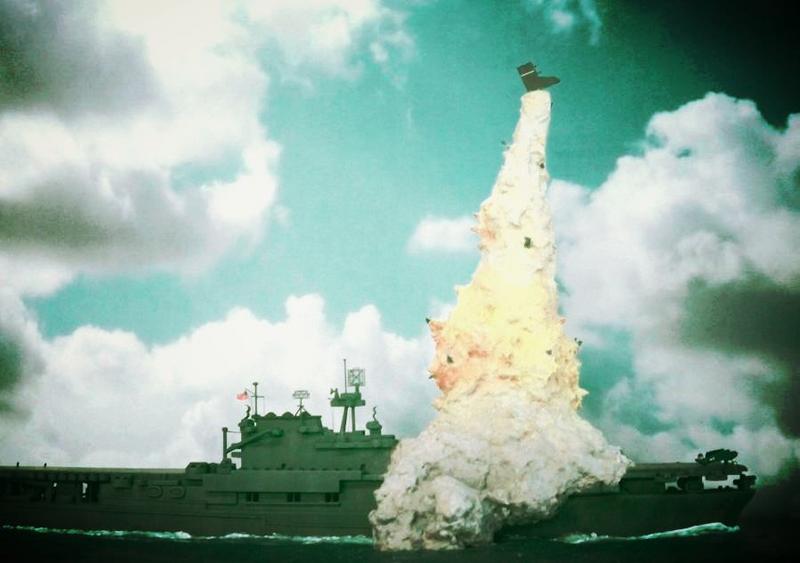 Hello again ... I've just answered your response to my question on USS New Jersey. To clarify, I am planning to use a 'forced perspective' technique for my scene ... a 1/144-scale kamikaze aircraft banking in preparation for a dive towards a 1/2000-scale ship. Clearly, the best viewing angle for the scene would be from directly overhead (or thereabouts). The aircraft will obviously need to be supported via a very thin wire or perspex rod (curved upwards) from the edge of the base, and positioned high enough from the ship to give the illusion of distance. Given the scale difference, what would you recommend as a distance between ship and aircraft?