Air Campaigns
Want to start or join a group build? This is where to start.
Hosted by Frederick Boucher, Michael Satin
OFFICIAL: Grumman Campaign 2019

Making some progress. I got the wings and tailplanes added. The butt joins weren't really all that bad on the wings. I did need to use a little putty to clean them up.

Just a little more work cleaning up the seams and she'll be ready for paint.

This is a great kit! One of the first that really propelled Tamiya to the status they are at now. They did make a goof though, and it's the cockpit. They did a full cockpit floor where it should be open around the troughs. Many have written about this, and not seeing a reason to purchase aftermarket for this build, I went with the easy solution. Cut the floor out! I measured twice and cut once!

Here you can see where I cut the right side out, and have scribed the left, and about to remove. A little sanding, some paint and poof!

I think it looks very nice, once test fitted into the fuselage. Though with most round fuselage planes, interior detail is a bit hard to see.

And for the critics out there, yes, I was a bit enthusiastic in painting what is actually an oxygen bottle red, instead of yellow? green? But it turned out looking cool, and is hardly noticeable, so won't be changing...

REPLY & QUOTE
RhinoSpit (Franck) said
My entry for this campaign: REPLY & QUOTE
md72 (Mark Doremus) said
Wow, I thought I was signed up for this with my new tool Airfix Wildcat. gotta fix that. 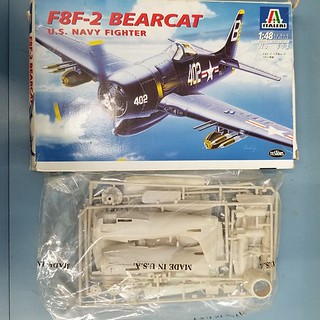 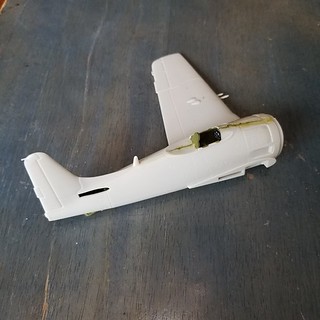 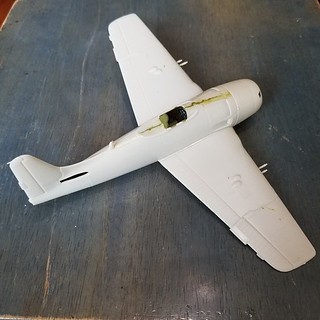 Nice choice! I've always loved the Bearcat, got the Hobbyboss kit and will build it soon.

I used to cut grass for a Lt. Commander in the Navy that after the war got to see the trials of the F8F. He claimed that it would stand on it's prop up to about 10K Feet! It was quite the plane, though, the advent of the jet age made it pretty obsolete fast. Still a cool little plane. 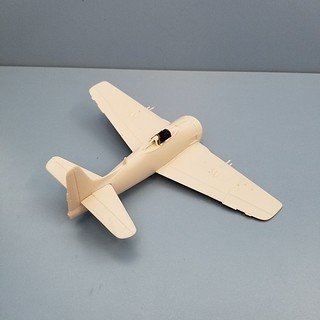 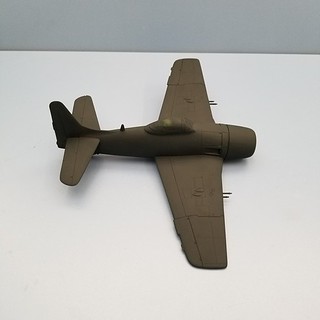 Making more progress. I was a bit skeptical of the Hobby Boss kit at first (compared to Tamiya) but under a coat of primer the surface details look really nice. Care does need to be taken with the soft plastic but its a nice kit once its all together.

I will end up adding a few more versions to my stash I have a feeling.

One last look at that nicely detailed engine before it gets closed up in the cowl:

Starting to look like the proverbial barrel with wings:

The underside coated with several misted layers of AK Real Colors M-485 Light Grey cut with Mr. Color Leveling Thinner; I thought it looked a bit tan in the bottle but it looks good to me now:

I'll give it a day to cure and lay down the topsides this weekend, AK Real Colors M-485 Blue-Grey. So far I really like the paint range. I have used them exclusively on this build with the exception of the Tamiya Fine Primer. More to come soon...

REPLY & QUOTE
stoney (Eric Johnstone) said
Hi all, tossing my hat in the ring with the Eduard Hellcat, pic is stupid blurry as my phone is acting up but it'll get me started. 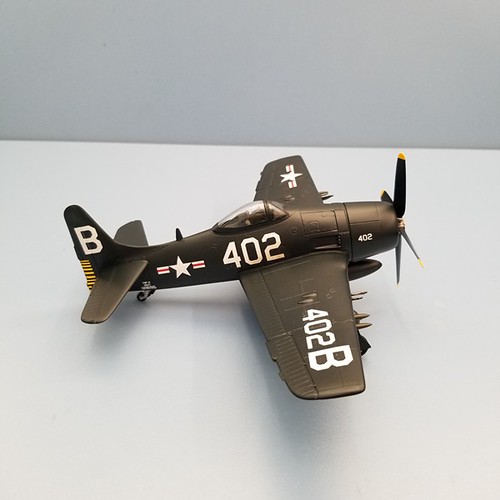 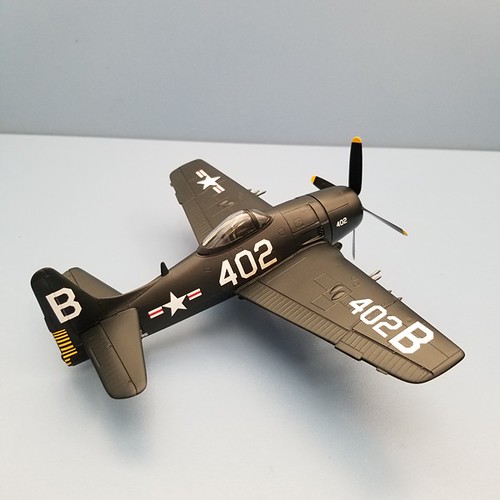 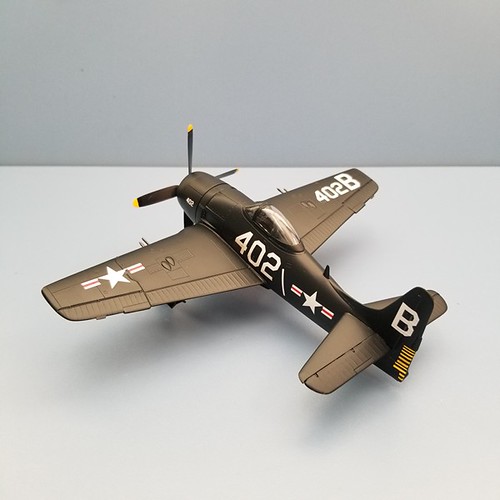 next step: glue the wings and fill the various gaps ! 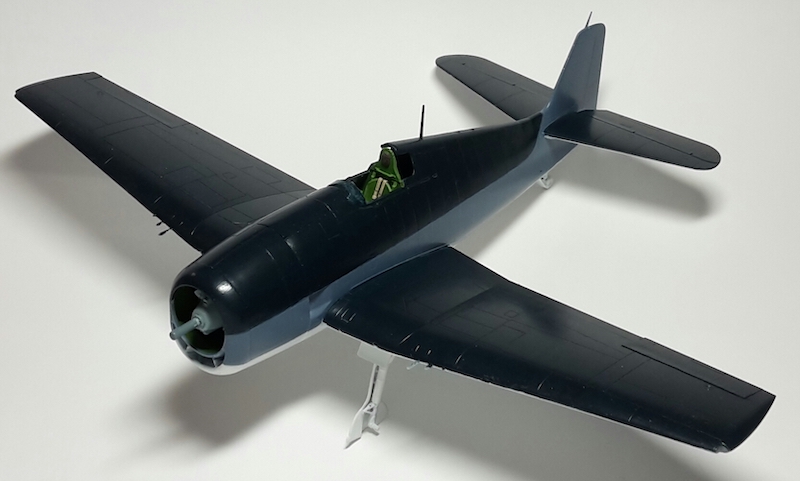 Nice interior Franck. Was going to ask will it be visible, but last photo gives pretty good answer...

I've been hammering away at the big F6F (when life projects don't get in the way) but I think the engine may have defeated me. Somehow I seem to have gotten the crankcase on wrong, twisted around a couple of cylinders, and the repercussions of that error are starting to pile up. In any event, there's no way I'm going to finish in a couple of weeks. I'll keep trying, but the frustration is definitely making me consider trying something else for a while.

Meanwhile, it's great to see everyone else's fine work!

I've been plugging away on my F4F-4 Wildcat and will admit that the Tamiya offering is a pleasant build. I built this back in 1996, and managed to crack the sliding glass, apparently, I've not learned as I did it again. Fortunately, I have some Krystal Klear, so we'll see how it turns out.

A bit of an update, Got the airframe done.

Painting has begun, and the undersides are done. I also finished the uppers, photo to follow.

Next up, decals and then the little things, and she'll be done! 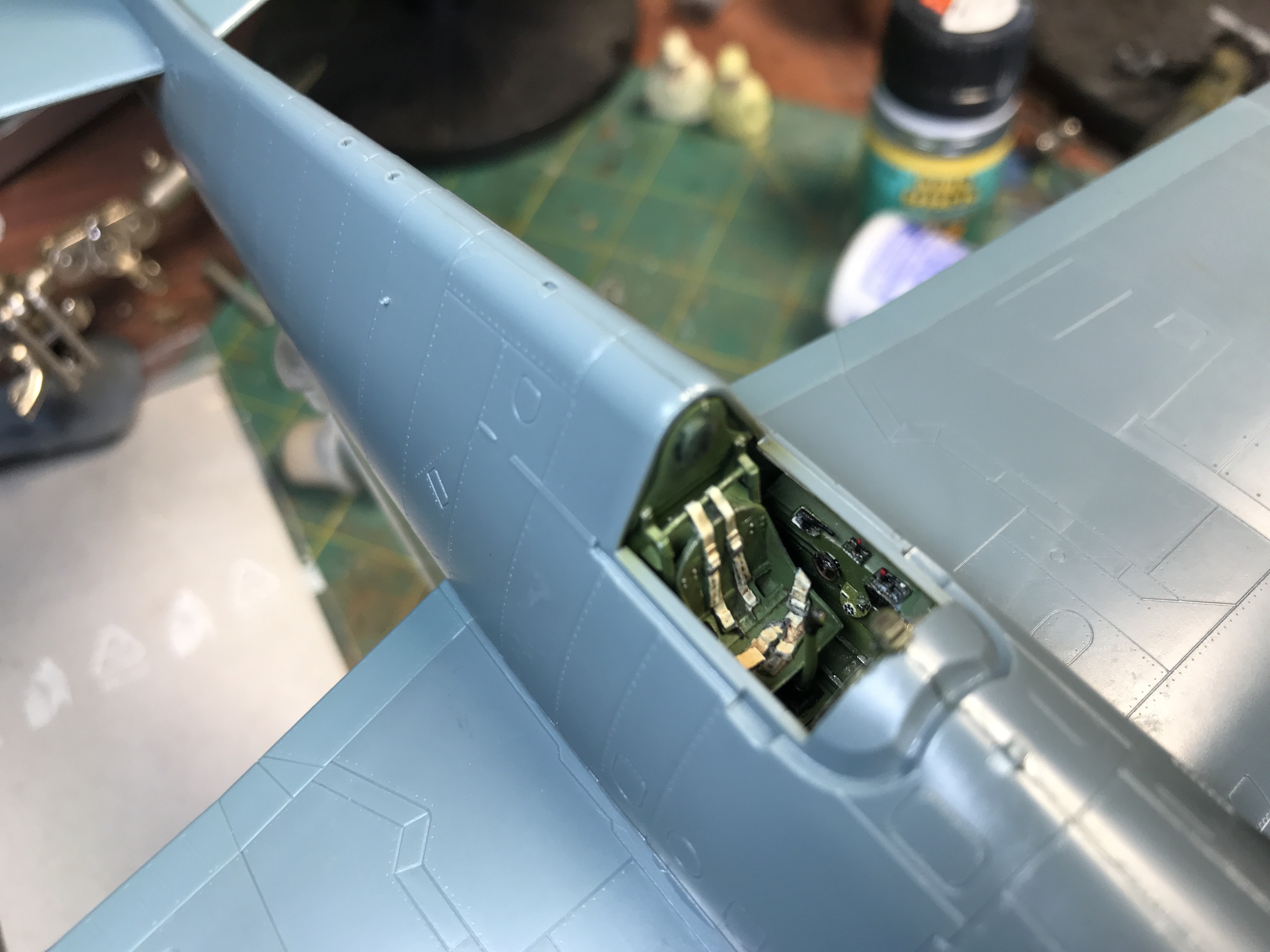 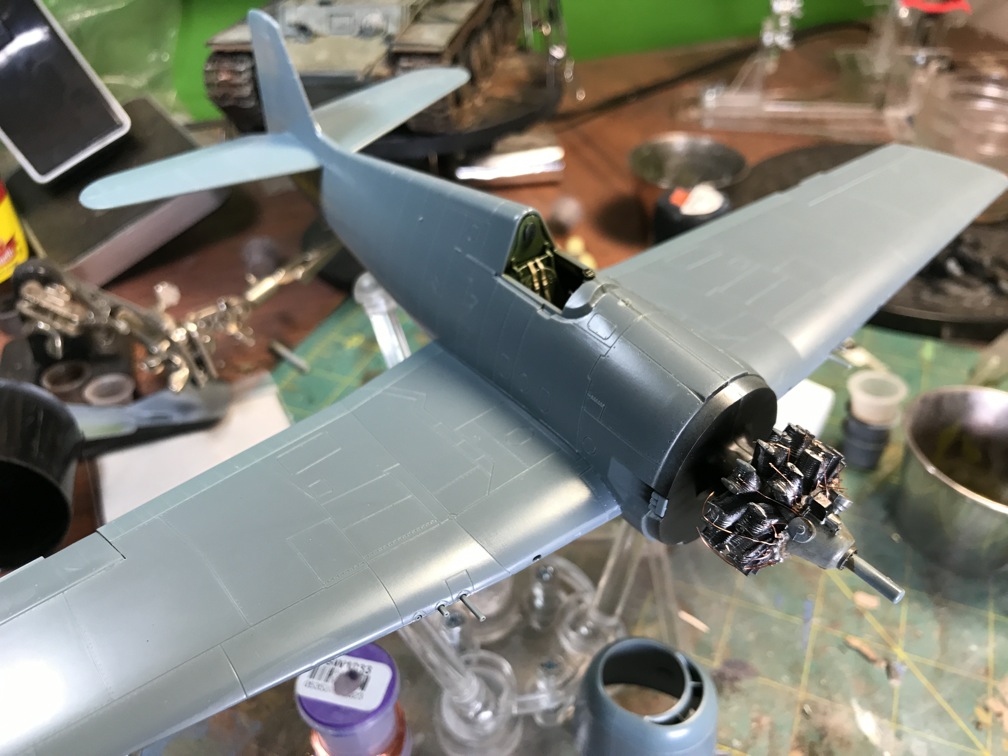 couple quick desk shots, so far its a mixed bag but enjoyable. I used an Ultracast seat, as I almost always do, I tried the kit part with the PE belts but really didn't like the lack of drape and the stark colours of the etch part, also the seat was a bit chunky. Dug around in the parts drawer and founs almost everything but a Hellcat seat, thanksfully their always quick to ship and I was back moving again. Some scratch work was neccesary on the engine as it just doesnt live up to inspection, the kit wiring harness was pretty flat and theres no moulded injection ring around the crankcase so some sprue bending later, a few punched disks and some fly tying wire its looking ok, not amazing but it'll do. the fuselage halves went together pretty cleanly, the wings as well. The pinvise saw action on the gun barrels, exhaust stubs, and the tail wheel. I think theres a bit of filling and sanding in my future but mostly the Eduard kit has been pretty enjoyable. Ill clear the bench off and get some better pics soon.

REPLY & QUOTE
stoney (Eric Johnstone) said
John, I too messed up that kits clear part, mine was the main windscreen and I ended up buying another kit to replace it I wrecked it so badly, really enjoyed building it, one of the classic Tamiya kits for sure. You're making great progress, looking forward to seeing it come together! 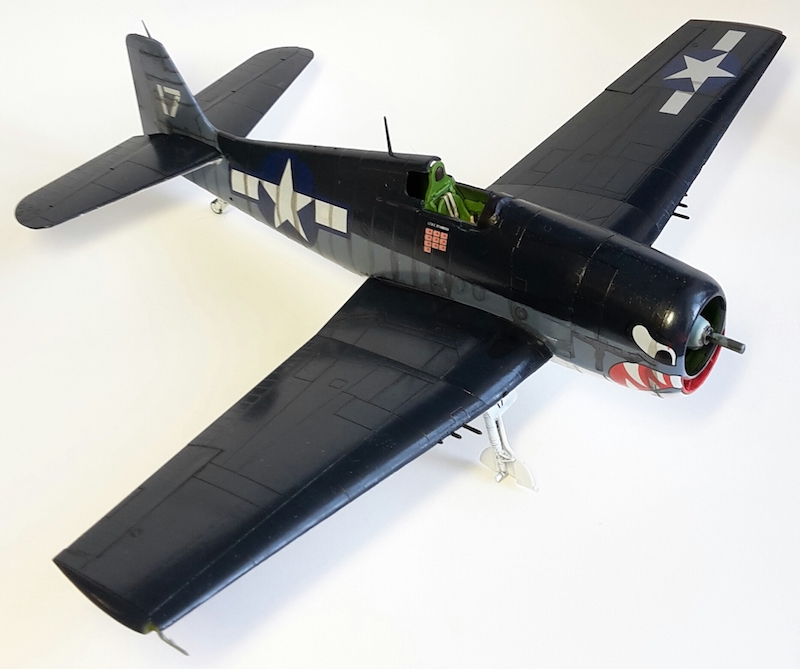 Quick update. I sprayed the top coat of AKRC M-485 Blue Grey, preshading the upper panel lines with Tamiya XF-50 Field Blue. I have really taken a shine to AK's Real Colors line. I used Tamiya's X-22 for clear coat and added decals once everything had been given time to fully cure. Hobby Boss' decals went down beautifully with Microset and Microsol applications, snuggling tightly into the kit's panel lines.

She just needs some weathering detail added, then the fiddly bits glued on. I should actually manage to make the deadline for a change!

I hate to do it but I need to ask for a brief extension, maybe another week or 10 days. I have pretty much everything done, and just need to put a flat coat on and weather some of the small bit before I add them to the kit. I might make it by Nov. 1 but I want to give the clear coats time to cure fully so the last bit of weathering doesn't ruin the paint job.

Would that be okay?

She is nearly done:

REPLY & QUOTE
MichaelSatin (Michael Satin) said
I don't have any problem with an extension. In fact, let's go ahead and do a full month, until December 1. I don't think it'll help me finish the big F6F (as I'll be out of town the first two weeks in November) but it might help some others! 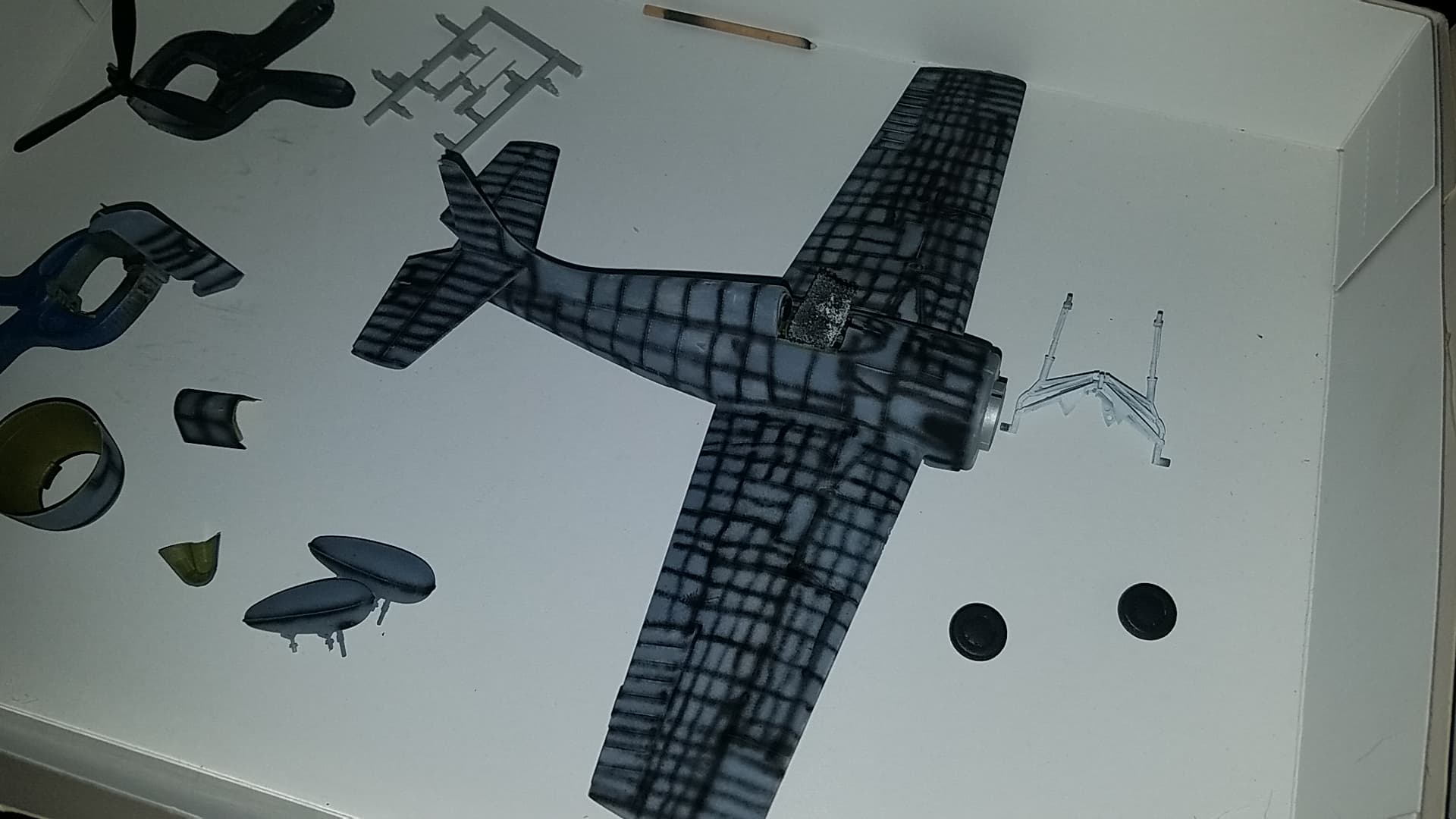 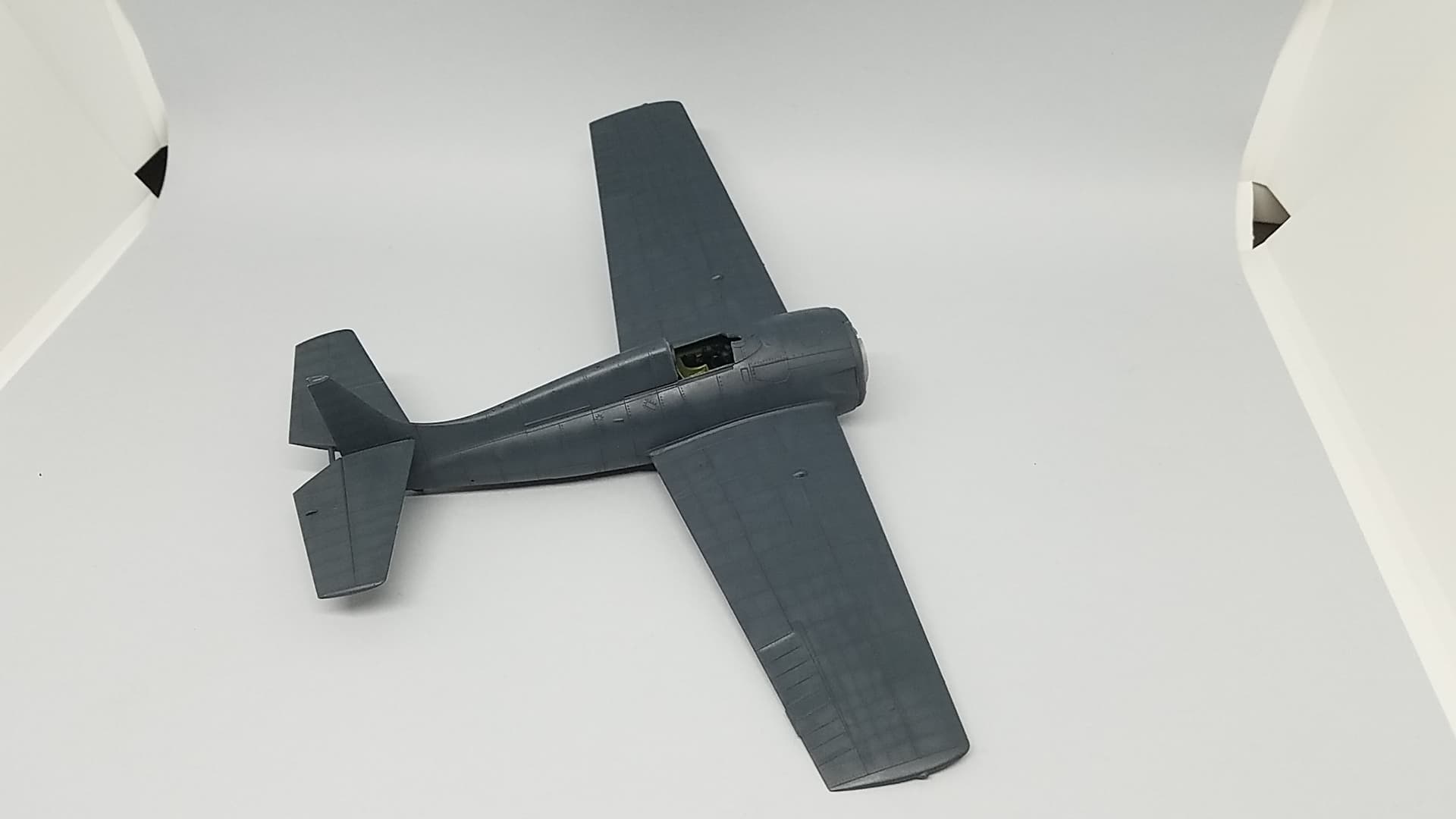 and 3 days later, chipping, one coat of future/klir and decalling 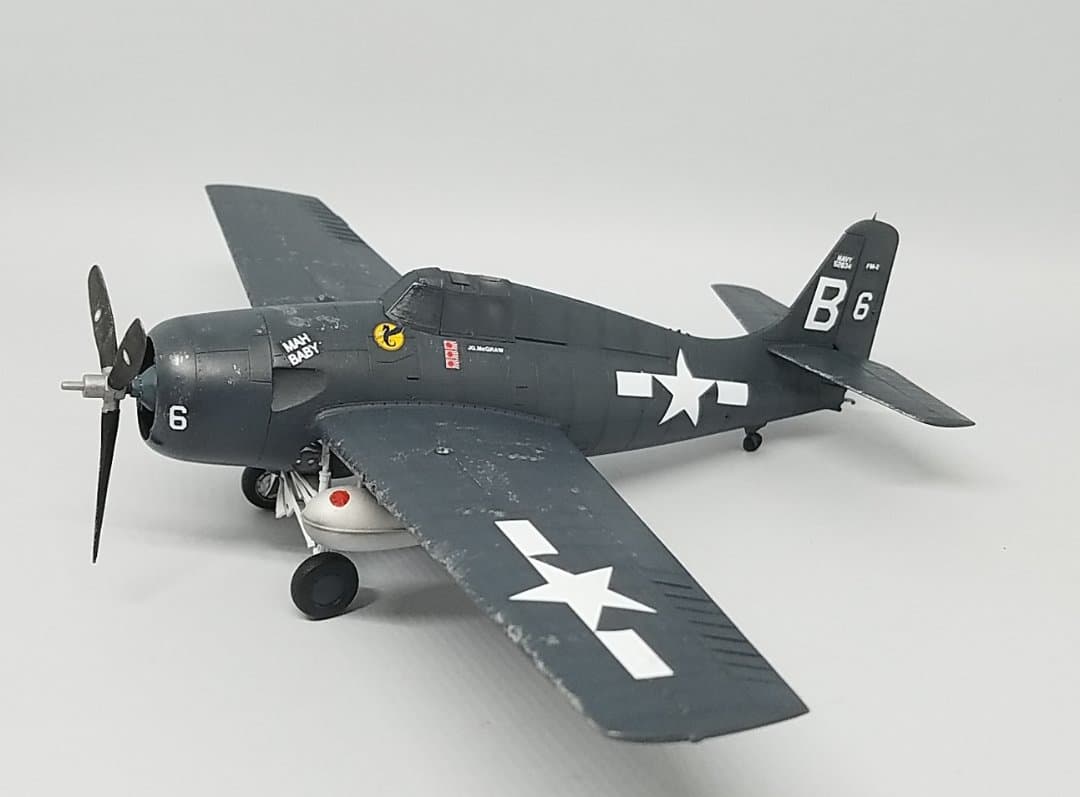 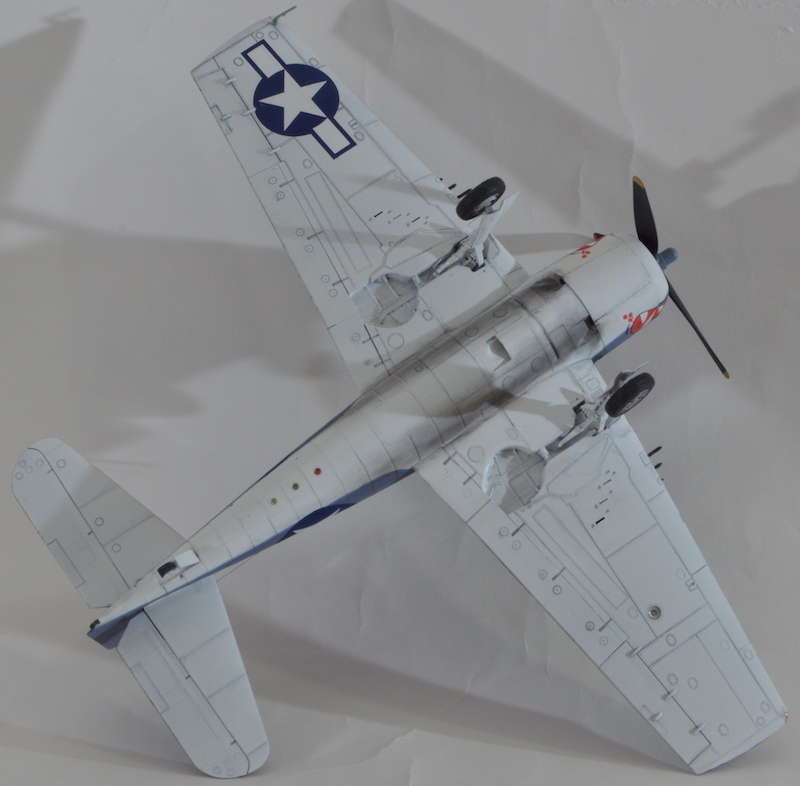 I'm pretty pleased on the underside finish, but upper side is sort of OK. If you have this kit in stash, then be careful with the decals. They are thin, but quite unforgiving.

Two more photos are in the gallery.

Thanks for the fun campaign, and looking forward to seeing other finishers.

Paul, looks pretty nice from here. Seems to be a nice kit, I'm going to have to pull mine out of the stash and put it next to my -4!

This one is done!

This was primarily a reference build for me, as I got a few more in the stash (7), that will be done!

This is Lt. James J. "Pug" Southerland II's mount "Junior" that he flew on August 7, 1942 from the USS Saratoga. He is credited with the first aerial kill of the Guadalcanal Campaign, a "Sally" I believe. Shortly after shooting the bomber down, he was jumped by four Zero's. He was able to shake three, the four happened to be piloted by PO1c Saburo Sakai of the Tinian Air Group. During the ensuing dogfight, Junior was hit multiple times, and to Sakai's amazement kept on flying. Finally, Sakai used the 20 mm cannons, and hit Southerland's engine, forcing him to bail out. This engagement caused Sakai to be separated from his group, and while taking on what at first he thought were fighters, turned out to be Avengers. Sakai suffered a 30 cal. shot to the head near his right eye. This wound knocked Sakai out of the war for some time, and most likely saved his life, as the Tinian Air Group got decimated over the course of the battle for the Solomon Islands, also known as the resting place for the IJN Air Force.

The kit is a wonderful one! Though, the landing gear is a bit fragile, as I discovered while taking the finished photos.

Somehow the main strut broke free of it's location, and also the main gear cover cracked. I was able to repair this, and then the plane was gently placed in the case.

I can safely recommend this kit to anyone! Have fun, and enjoy! Also, happy Halloween! A day that goes unrecognized here, and yes, I do kind of miss it! REPLY & QUOTE
alliedbuilder (c. swisher) said
Hopefully it's not too late to get in on this but here's my entry: 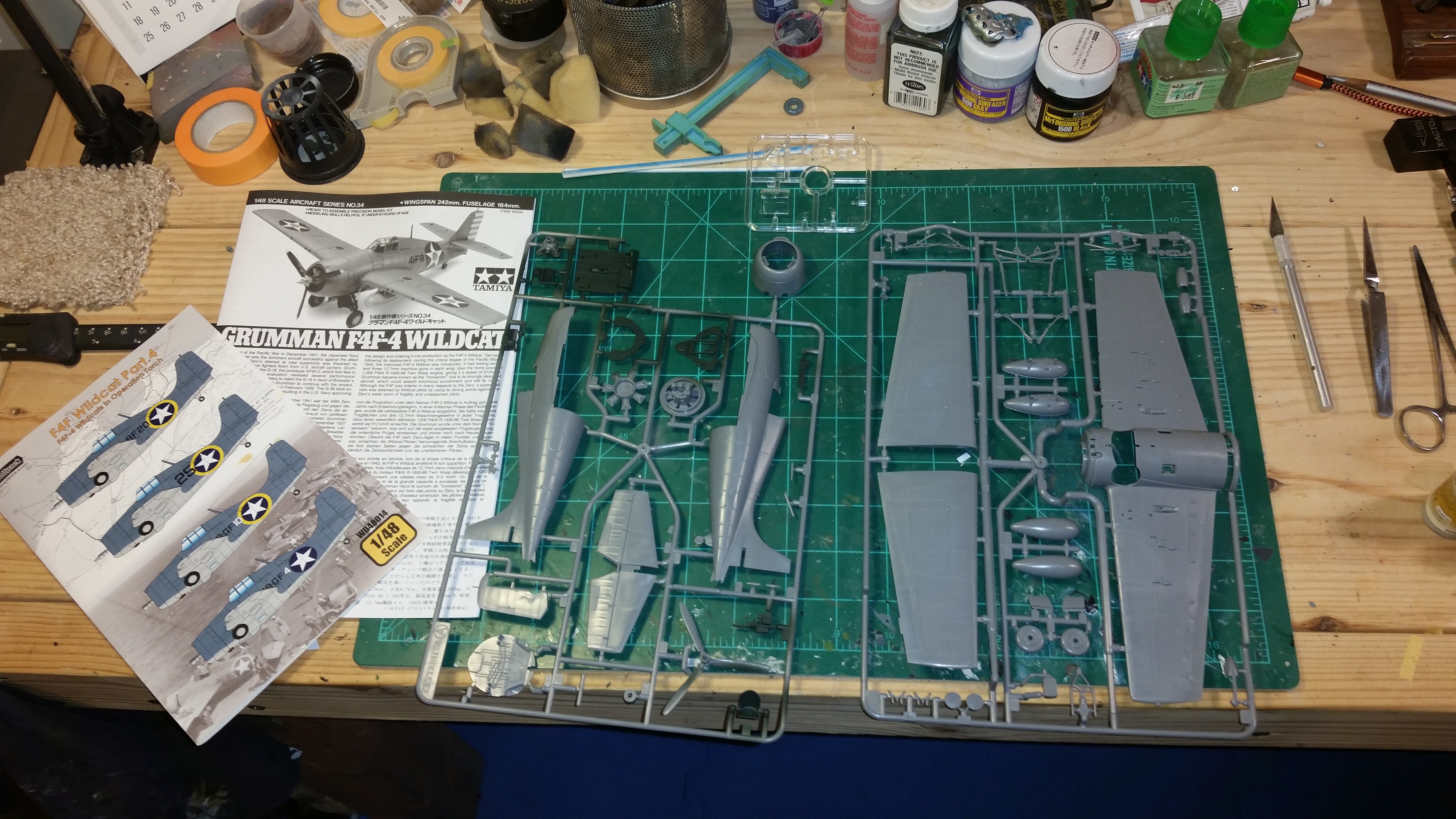 The Tamiya Wildcat, I've got some days off work coming up and looking at the kit it looks like it will be a quick build. It's ambitious but I think I can get it done by the Dec.1st deadline.
I'll be finishing it in markings for VF-41 from USS Ranger during Operation Torch.