Air Campaigns
Want to start or join a group build? This is where to start.
Hosted by Frederick Boucher, Michael Satin
OFFICIAL: Aluminium Cans or Quicksilver

Linus Just glue it! mantra works after all. Nice progress! What is your choice of metallic color?

Keep it up, guys! Nice campaign so far

I am planning on using Alclad Aluminium.

REPLY & QUOTE
Szmann (Gabriel) said
Thanks, Linus! I'll be watching. If I re-join the campaign, I will use Alclad Aluminim Airframe as well. 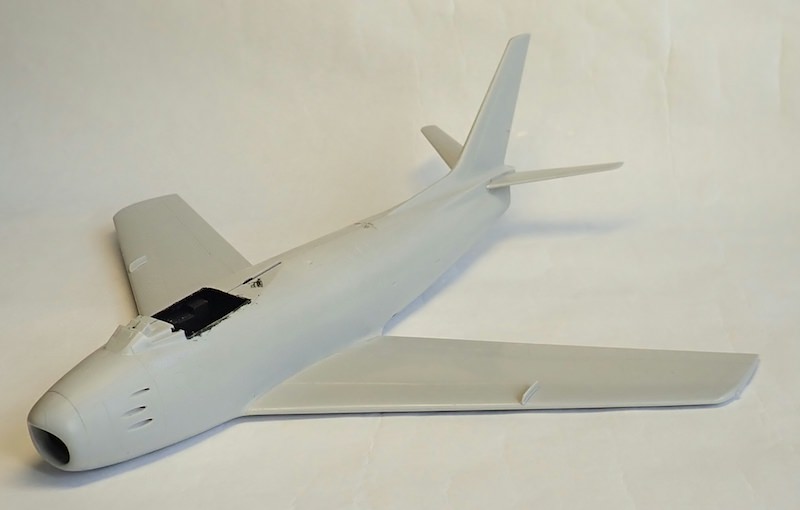 I did spend extra effort on sanding seams, and I'll see after primer whether there's any more cleaning to do. I'm planning to use True Color wax based metal paints and I'm aiming to quite oxidized look that's evident on the plane when it was in in Korea

REPLY & QUOTE
Szmann (Gabriel) said
Pasi, good job on that Sabre! And your painting aim looks gorgeous... let see how you're going to manage that 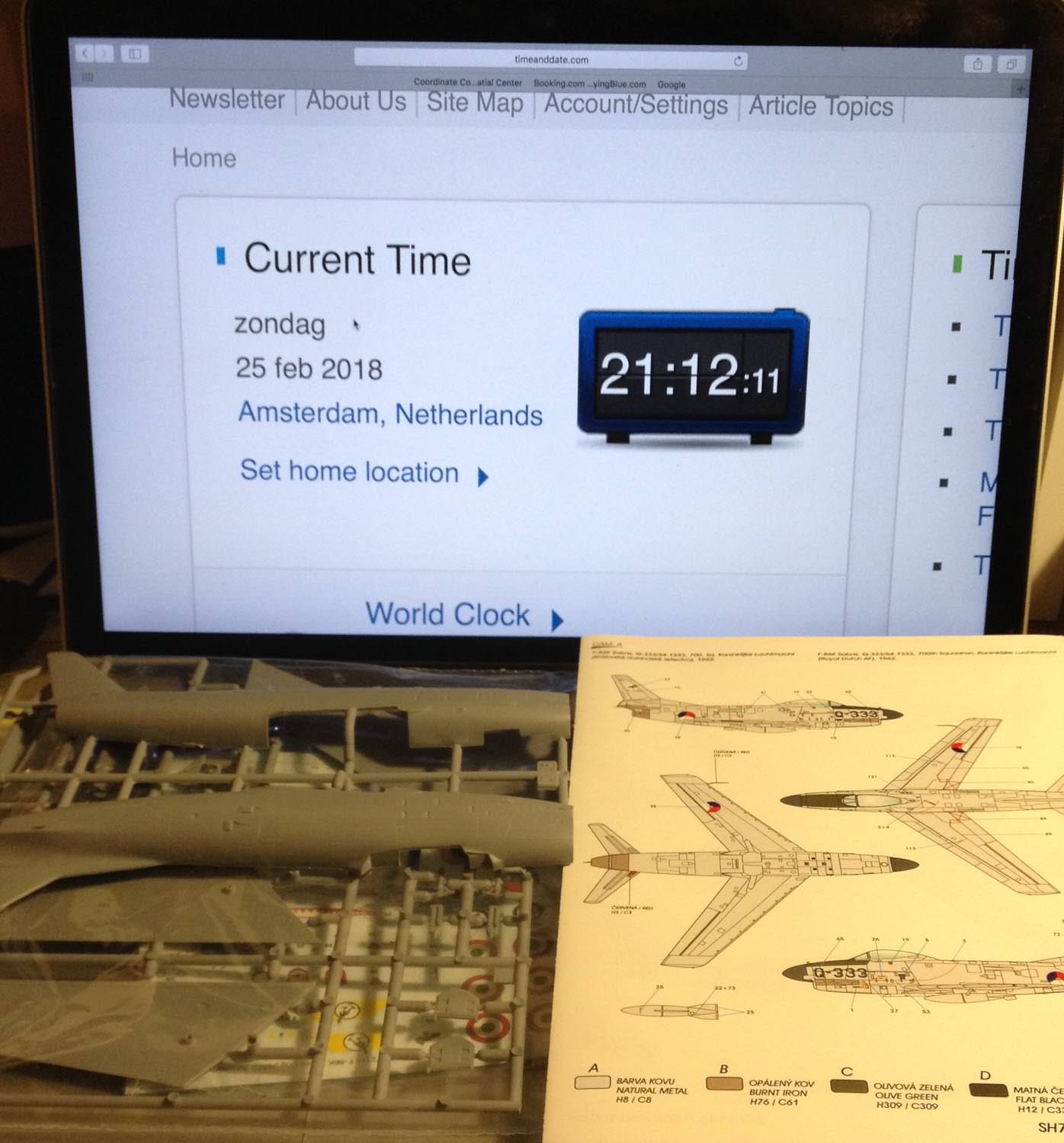 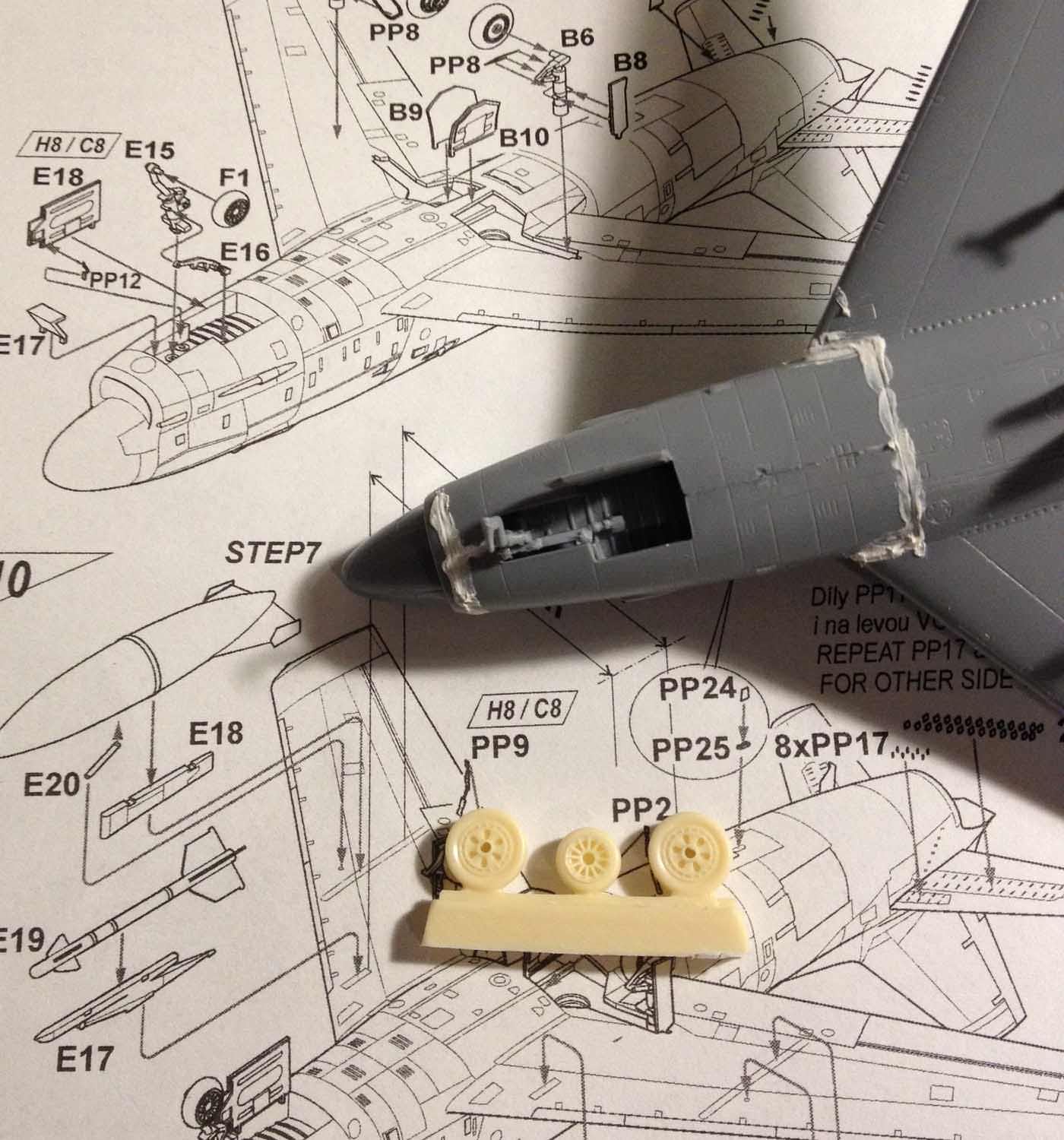 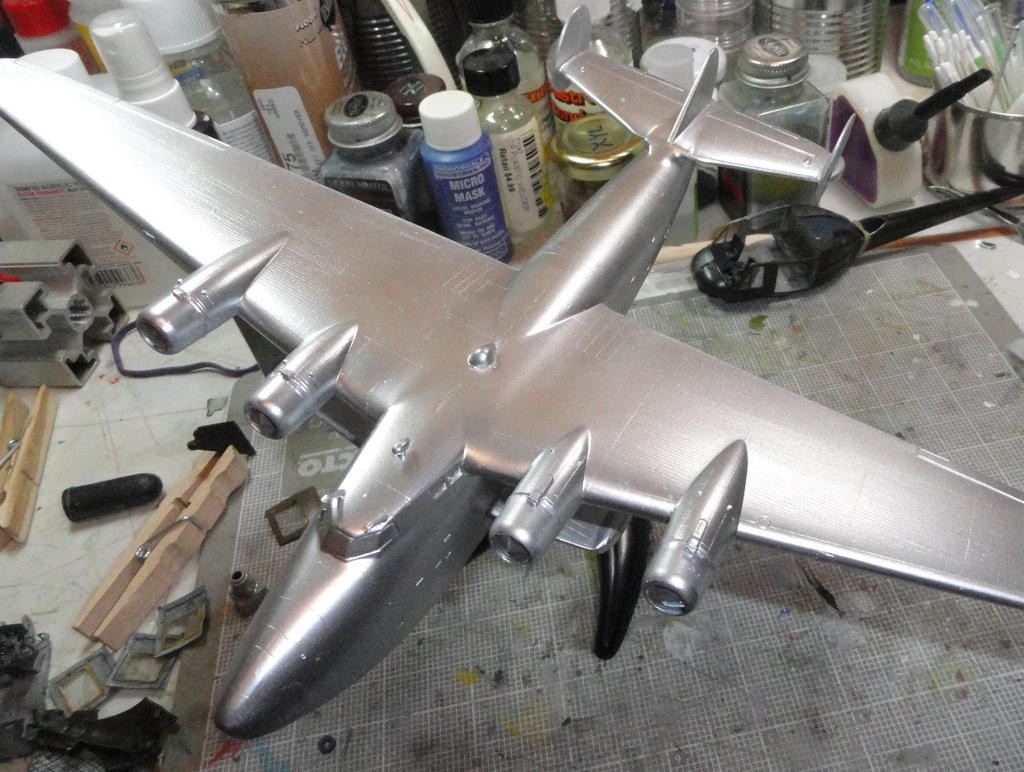 Was able to shoot straight from the bottle at ~20psi. Worked reasonably well. Gotta clean up some boo boos but it's looking good.

Primed with a mix of dark grey and gloss black 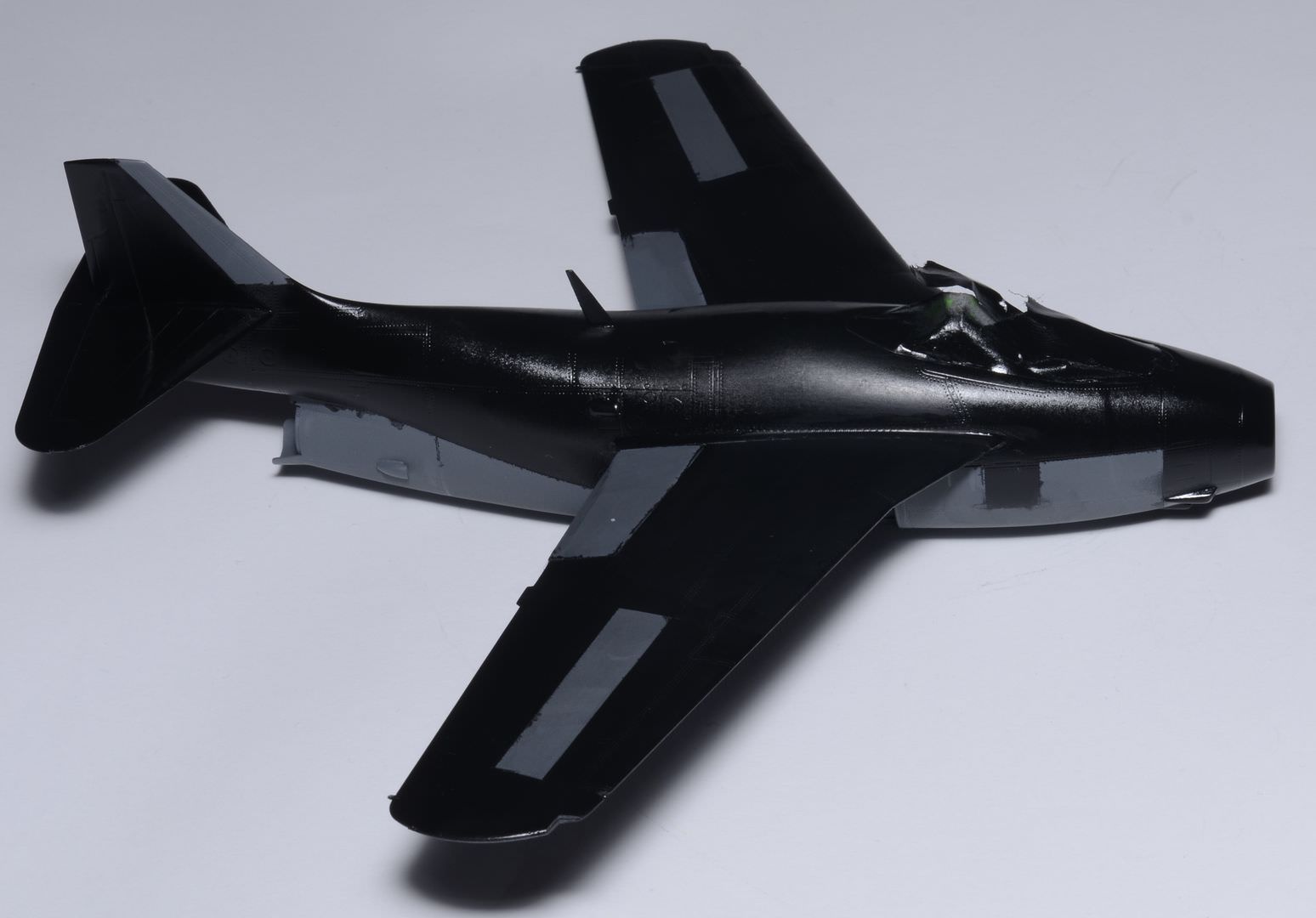 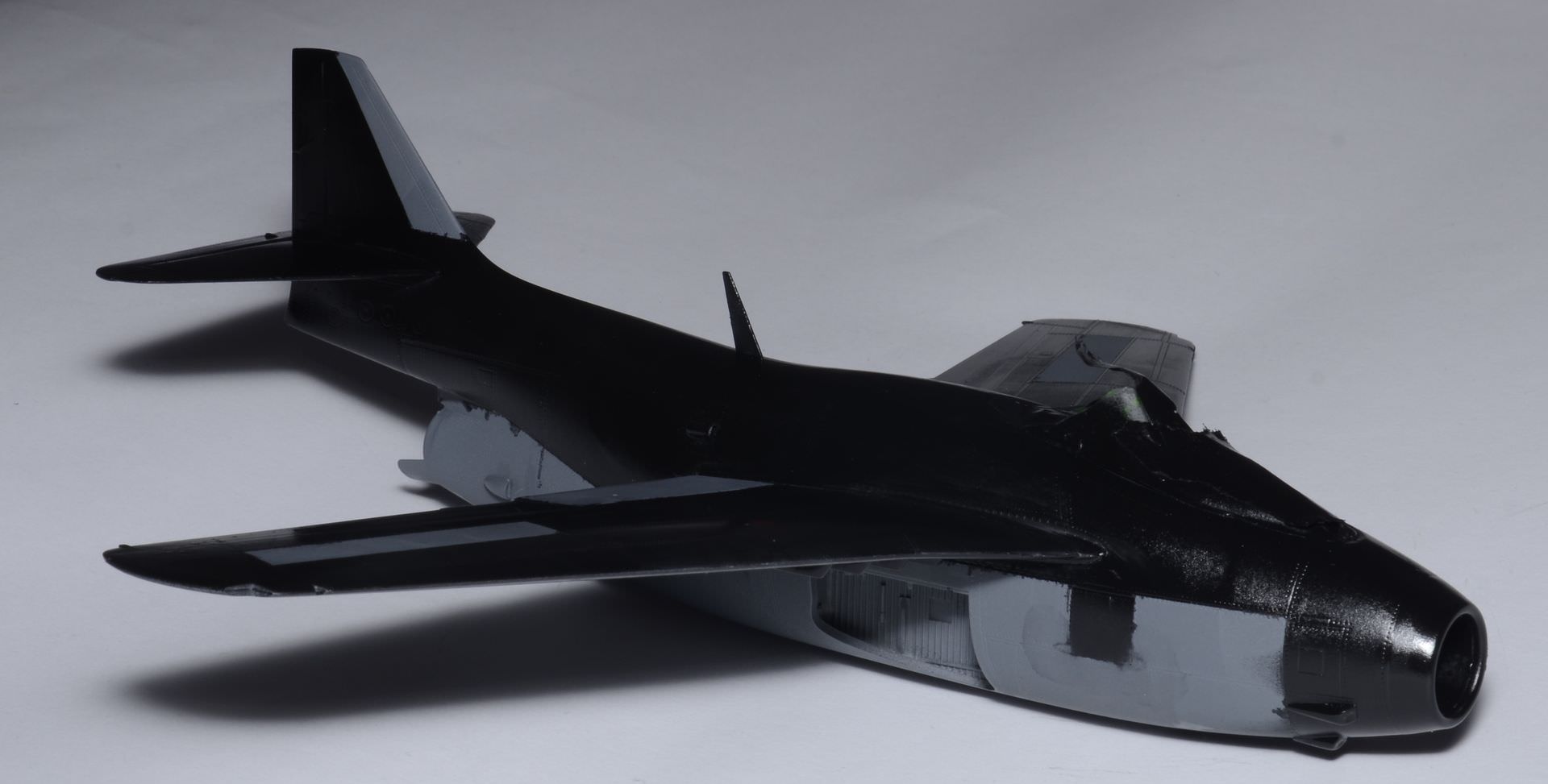 had to clean up a bit of the leakage with some isopropyl and a cotton swab.

Then top coat of Alclad aluminium. Tried Dark aluminium in the wheel wells, but not a lot of difference that I can see between the two... 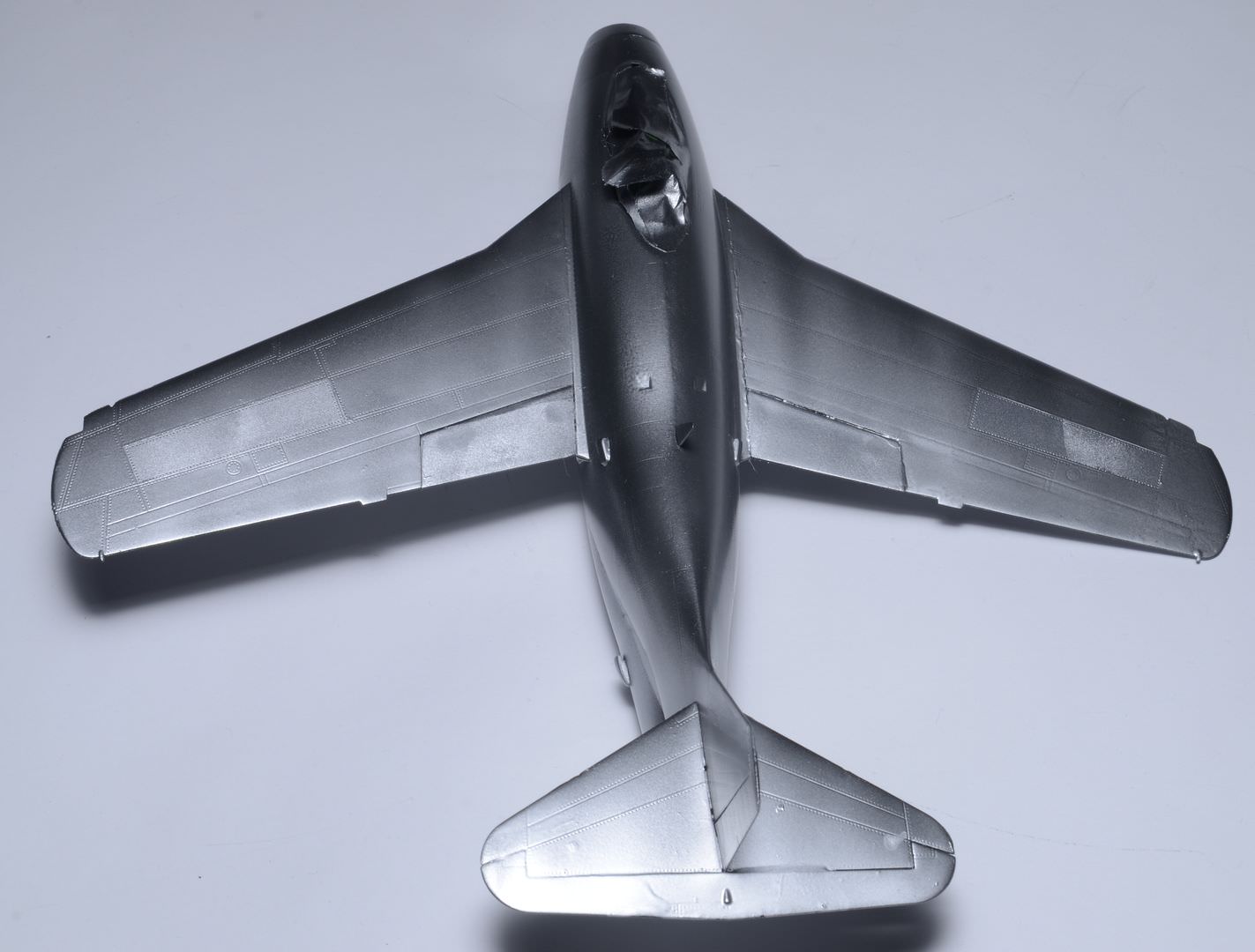 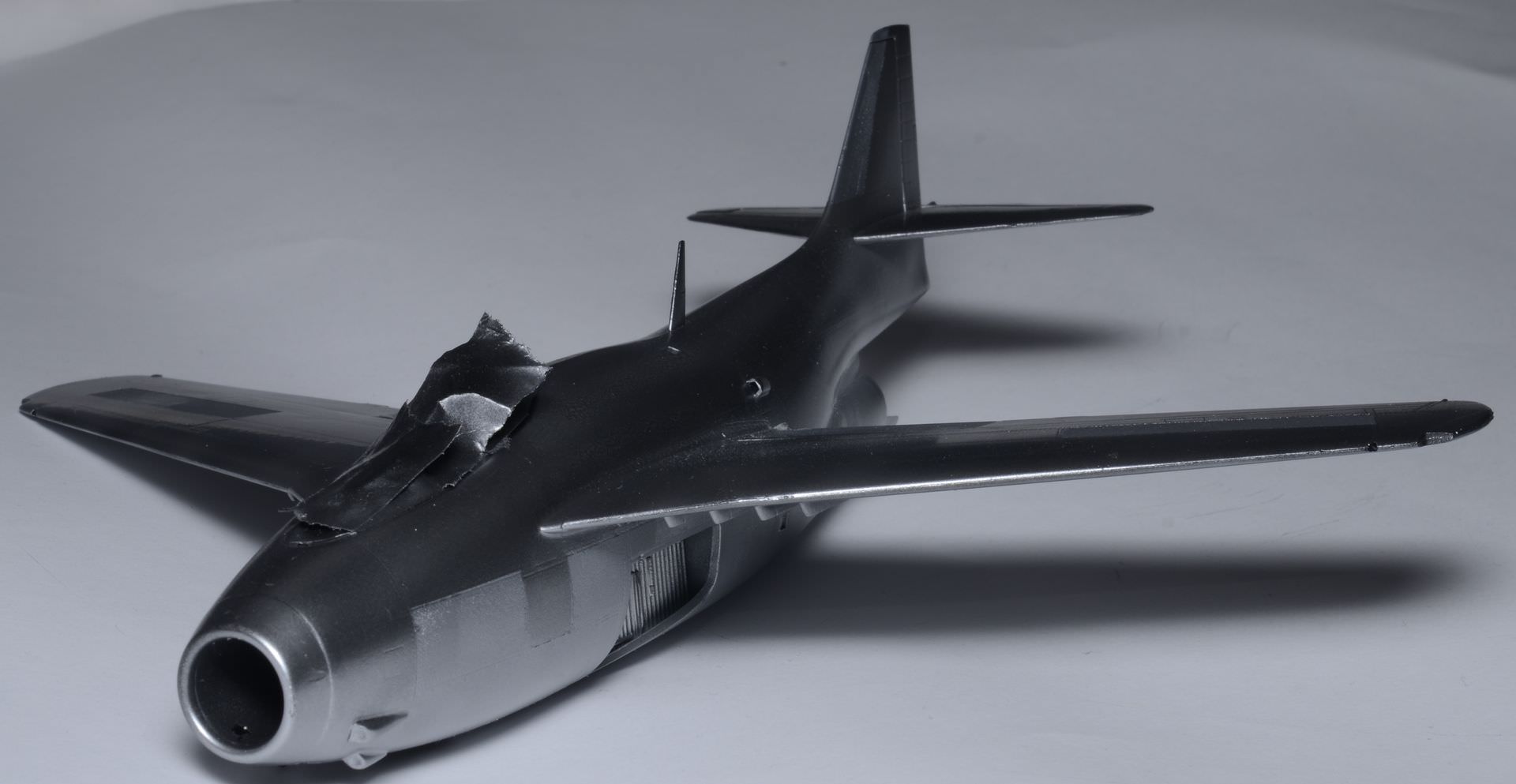 REPLY & QUOTE
Szmann (Gabriel) said
Iain, looking good and interesting technique! I may give it a try. I have the same problem with Alclads: the shades are very close to each other - you barely can see any difference. The one that stands out as darker is polished aluminium. Airframe aluminium, aluminium and chrome are about twins 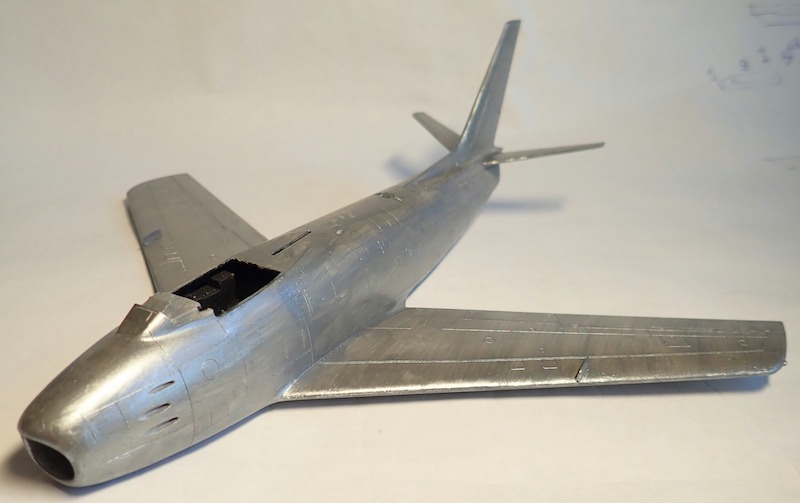 Followed by one application of True Metal aluminium: 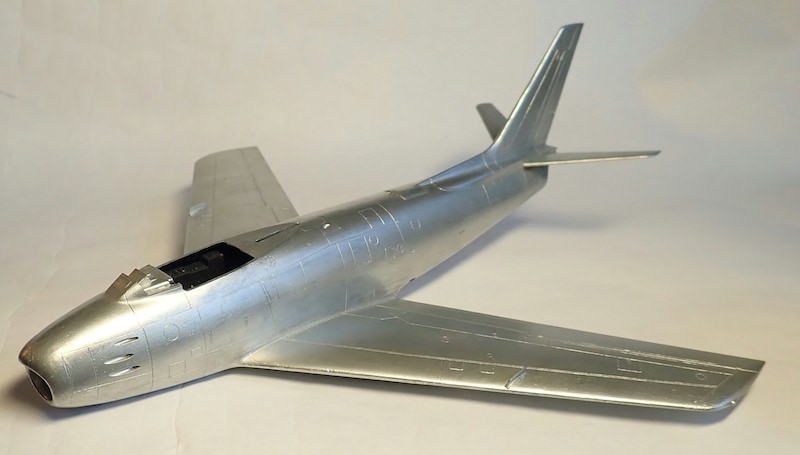 I'll try to make the NM finish more varied next.

I have been always terrified of NMF. I try to avoid them.

I show the opportunity of using this campaign as as excuse to test the Vallejo Metal Color line. I have read that they are not perfect but they are acrylics and I airbrush in my Kitchen.

The main problem is that I wanted an easy build with a dual kit to fully embrace experimentation and I overdid it and I choose a very small plane in 1/144. I can barely see it! (I will start slowly while I finish my entry for the Vietnam Campaign.)

REPLY & QUOTE
Szmann (Gabriel) said
Carlos, interesting project. I will follow this one!

A small update on the small mig-15.

I have done the basic interior (grey paint+1 decal+wash+drybrushing), finished the main assembly (~5 parts!) and prime the model with glossy black primer.

I will have to work more on the finish, the primer looks a bit rough and there are a few seams to be filled and sanded. (I thought I have done that but the glossy black doesn't hide any imperfection.) Those are all the parts of the model!

Lots of good builds going on here! Carlos, that is one small plane!

So, have you ever thought you've done something, and proceed along like you did it? Well, as it turns out, I decided to join this build on June 1st. While the paint was drying on the C-47, and feeling the need for something that would be a less challenging build, and make a nice gift for the wife, I began Tamiya's P-47D "Bubbletop".

I intend to do this as a P-47D-28-RE of the 313 FG, 50th FS. This means a fin fillet, that the kit doesn't have. As luck would have it, amongst my squadron of P-47's I have Tamiya's P-47M which has the fillet. The M variant that I'll be doing doesn't have the fillet, so problem solved. This should be pretty much out of the box, haven't decided if the canopy will be open or not, depends on how I do on the cockpit.

Either way, it'll be NMF, and will sport nose art with my lovely wife's name, rather hard to find nose art with "Rosie" in it! Anyway, I will be keeping a log on this (a first for me), keeping track of all the stuff used, and especially the real time taken. I've always been curious, so time to see.

I did spend three hours mixing, and painting the interior colors, using Tamiya paints, and plan to use them through out, except for the NMF which will Alclad II.

Colors used to date are: XF-5 Flat Green for interior cockpit, XF-4 Yellow Green for Wheel wells, XF-16 Flat Al for cowling interior, X-10 Gunmetal for engine, XF-69 NATO black for instruments and radio. All were mixed 1:4 with Mr. Leveler thinner, and airbrushed at about 12 psi, using my Badger Anthem.

The writing detail may be overkill, let me know. I don't think I'll include the time to write this up as part of the build time (too much time!). Total time so far, including research: 4 hours 5 minutes.

This promises to be quite a bit of fun for me!

REPLY & QUOTE
Torpon (Carlos Martin Garcia) said
@John, really interesting build, looking forward to see more. (I wish I could give my wife an plastic model as a gift!)

Vallejo Metal color really looks the part over glossy black but I find it really unforgiving. A small overspray and it looks really dull. REPLY & QUOTE
b17-peter (Peter Mollenhauer) said
Hi mates,
I'm a little late, but I think I can make it to the deadline with my entry. Here is that little gem from Tamiya

Dry fitting is a dream yet, I think I will have much fun with this kit. Will be built OOB.
Cheers Peter

REPLY & QUOTE
Szmann (Gabriel) said
Peter, I'll follow your build. My own Tony is due to arrive next Tuesday. I ordered some Eduard IJA/IJN seat belts with it but other than that it's going to be OOB as well. Not for this campaign, though.

Peter, I'll follow your build. My own Tony is due to arrive next Tuesday. I ordered some Eduard IJA/IJN seat belts with it but other than that it's going to be OOB as well. Not for this campaign, though.

Thanks Gabriel, so I will have to produce my own belts... :-)

REPLY & QUOTE
b17-peter (Peter Mollenhauer) said
Some progress with my Tony, did mostly painting parts to get ready for assembling.

REPLY & QUOTE
PasiAhopelto (Pasi Ahopelto) said
Had a minor disaster Yesterday. Canopy isn't as clear as it could be, I think CA accelerator reacted with acrylic floor wax. But anyway it's now completed: 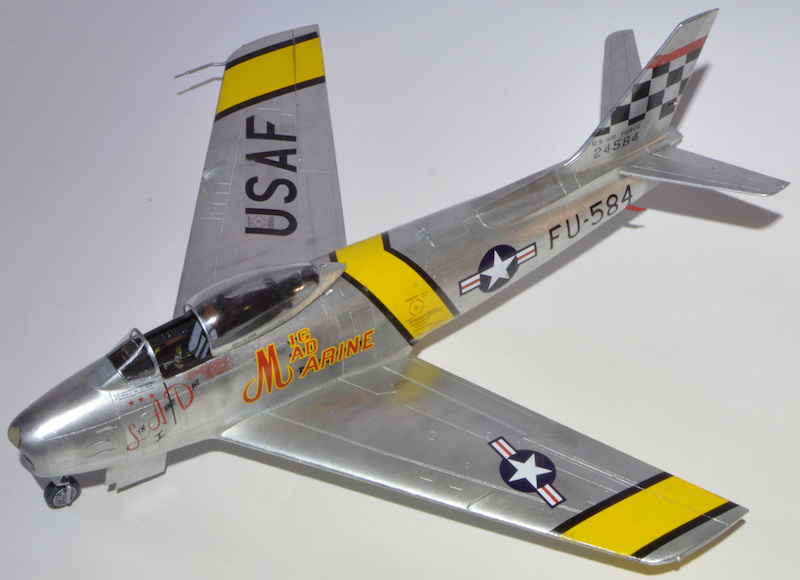 I got what I wanted from this campaign, which is more confidence to to natural metal finishes. Needs more practise, for example I didn't apply any washes: the model looks quite ok in person, but washes for panel lines could make it look better in photos.

Thanks for interesting campaign.

She looks great, don't worry about the panel lines.
I build the little kit (Fujimi 1:72) a few years ago.
Keep going, mate!

REPLY & QUOTE
Torpon (Carlos Martin Garcia) said
@Peter, I have been tempted by that models a few times. Looking forward to the progress

I had a bad time with my Mig 15bis. Mainly because the model is too small and my eyesight is not what it used to be. I did a mess with the canopy mask, landing gear bays and I managed to loose one antenna and break another.

Regarding the Vallejo Metal Color, I am a bit disappointed with the finish. Every little over spray shows in the model. Anyway, I am really happy with the bottom side.

Ah, the worse thing is that the model is a total tail-sitter. Why did I not put some weight. Eduard, why did you not put a reminder!

Anyway, my tiny entry for the campaign is here:

Thanks for the campaign, good luck to everyone!

REPLY & QUOTE
Szmann (Gabriel) said
Carlos taking on an 144th scale model of an aircraft which is very small in real scale is already a brave gesture! Don't be so harsh on yourself - the MiG looks good and we all know how temperamental metallic paints can be! (that was the objective of this GB actually)!

Carlos taking on an 144th scale model of an aircraft which is very small in real scale is already a brave gesture! Don't be so harsh on yourself - the MiG looks good and we all know how temperamental metallic paints can be! (that was the objective of this GB actually)!