....
I'm not sure, though, that the stated 250-300 rpm speed wouldn't just blur everything into an amalgam of all the colors at that height on the cupola, leaving the addition of speed lines as the only way to indicate movement.

Assume 300 rpm, this means 5 rotations per second.
With 5 slots in the "bin" this would give 25 images per second which is the same rate as normal movies. With more than 5 slots the image rate gets even better. What you will experience is a reduction in perceived brightness even if the eye adapts.

No, no -- I'm not talking about looking out from inside cupola; I'm talking about what the cupola would look like from outside the tank while it was spinning -- whether the camouflage would just blur into an average of the colors around the cupola. So if the cupola was entirely khaki except for a single rounded blob of dark brown that wrapped halfway around the cupola at the bottom, but only went halfway up the cupola, would you see blurred edges between the khaki and brown, or would you just see a brownish khaki at the bottom shading to khaki at the top?

REPLY & QUOTE
gastec (Gary Boxall) said
A clear coat was added which really darkened the green to a more realistic colour IMHO. I then added a pin wash and am now at the oils stage... 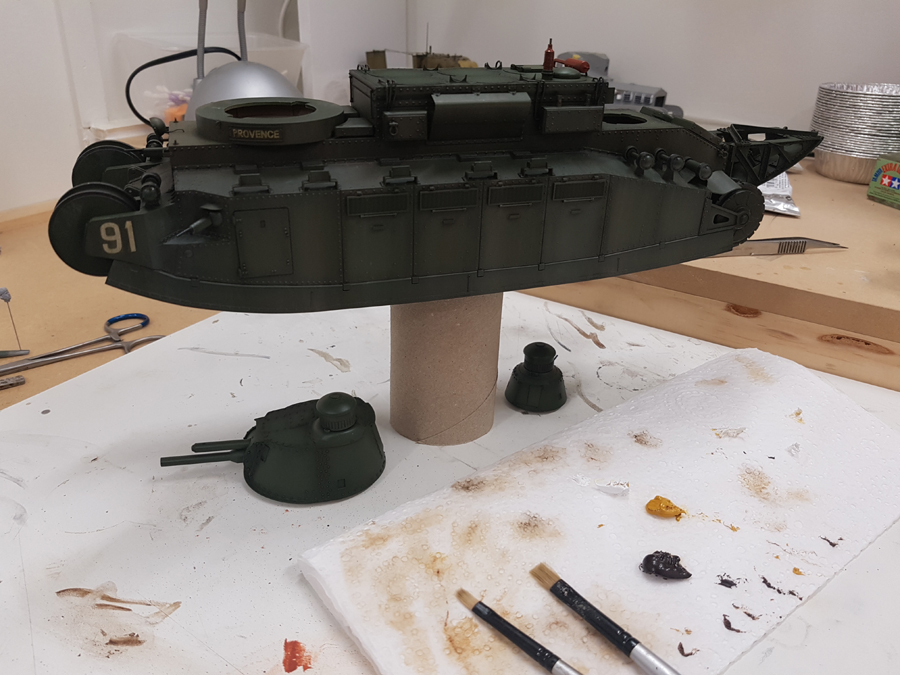 Lots of big flat surfaces to work on so this stage will take a little while I suspect...

REPLY & QUOTE
JSSVIII (John S. Smith VIII) said
Starting my favorite part of a build Gary, that monster would be a couple of 3 day weekends for me at least!

REPLY & QUOTE
bprice1974 (Brenton Price) said
I have been following since the beginning and this has turned out to be a good build log and a great looking build. I have learned a few things including the viewing system and your way of building and photographing has made it easy to follow. Thanks for keeping your work updated.