Ships by Class/Type: Destroyers
This forum covers all types of destroyers from all eras.
Hosted by Jim Starkweather
IBG Model's ORP Kujawiak Review and Build

REPLY & QUOTE
LZ32-TX (Marco Garza) said
IBG models' ORP Kujawiak review and build
A while ago Todd was nice enough to supply me IBGs 1/700 scale model of the Kujawiak so that I can review it and also build it. I should apologize for having taken so long getting this done. But before we open the kit a bit of a history lesson first.

The Kujawiak, originally named Oakley, was laid down on the 22nd of November 1939 at The Vickers-Armstrongs shipyard at Tyne. She was launched on October 30, 1940 and was finally commissioned on June 17, 1941. She was almost immediately given to the Polish navy who rechristened her Kujawiak (a kind of polish dance). The following day she was attacked by the German airfare while enroute to
Scapa Flow suffering only one casualty.
She would continue participating in escort duties for most of the year. In June 1942 Kujawiak participated in Operation: Harpoon as an escort in Force X. On June 16, the convoy ran into a minefield just off the entrance to Maltas Grand Harbor. Kujawiak struck a mine whilst coming to the aid of the HMS Badsworth (another Hunt II class destroyer), she sank before she could be towed into harbor.

Well first up is the box. Just your typical box with the art work on the front. Its actually much sturdier than boxes from other companies (it is more than capable of surviving the US Postal service). 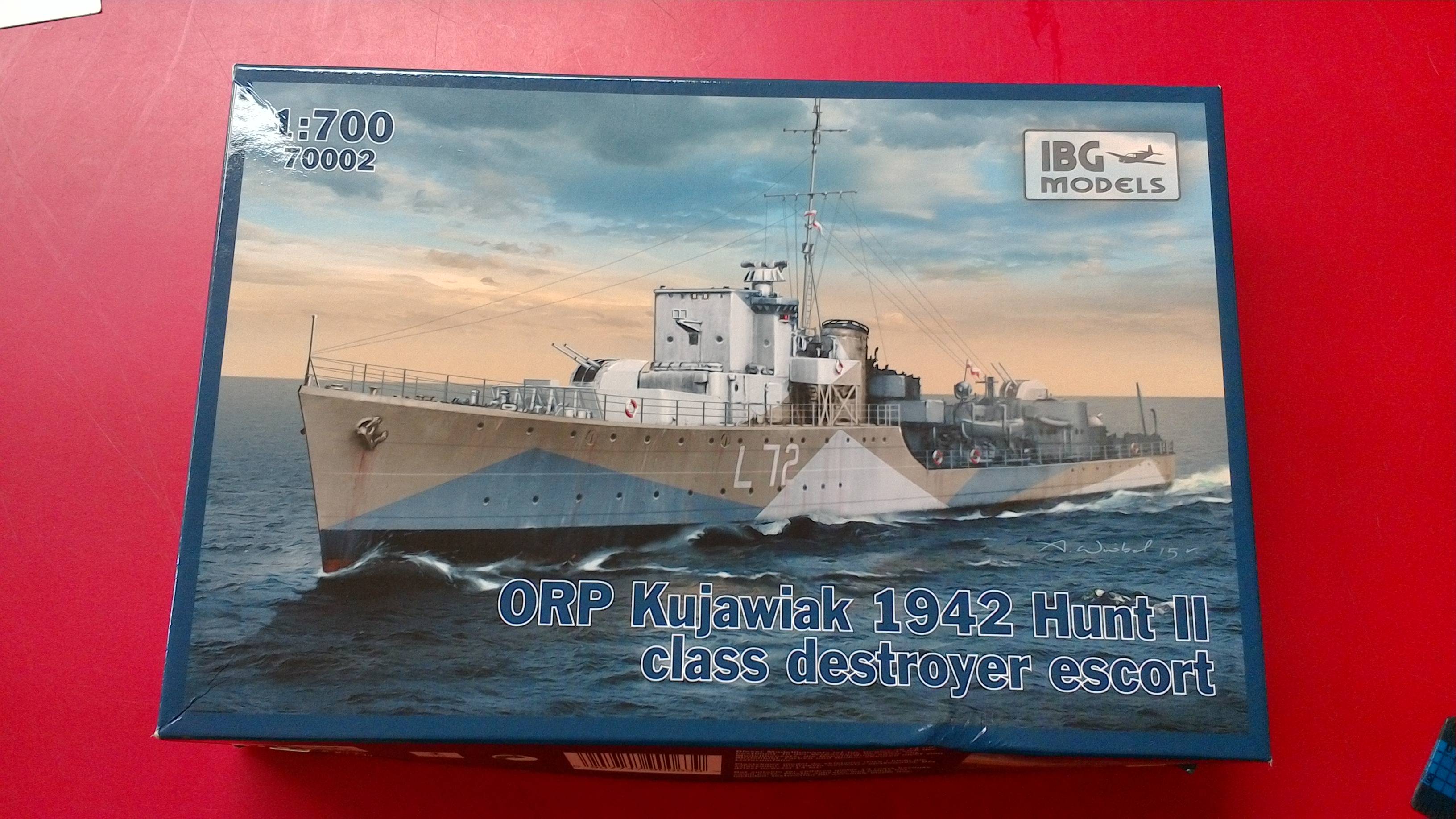 The contents consists of the instruction booklet (printed on glossy paper) one plastic bag with the sprues and another with the photo-etch and decals.


Here we have three sprues. According to the instructions there are supposed to be six but some are connected into a single sprue. I assume that some of the small sprues are exclusive to this kit (like the searchlight platform) 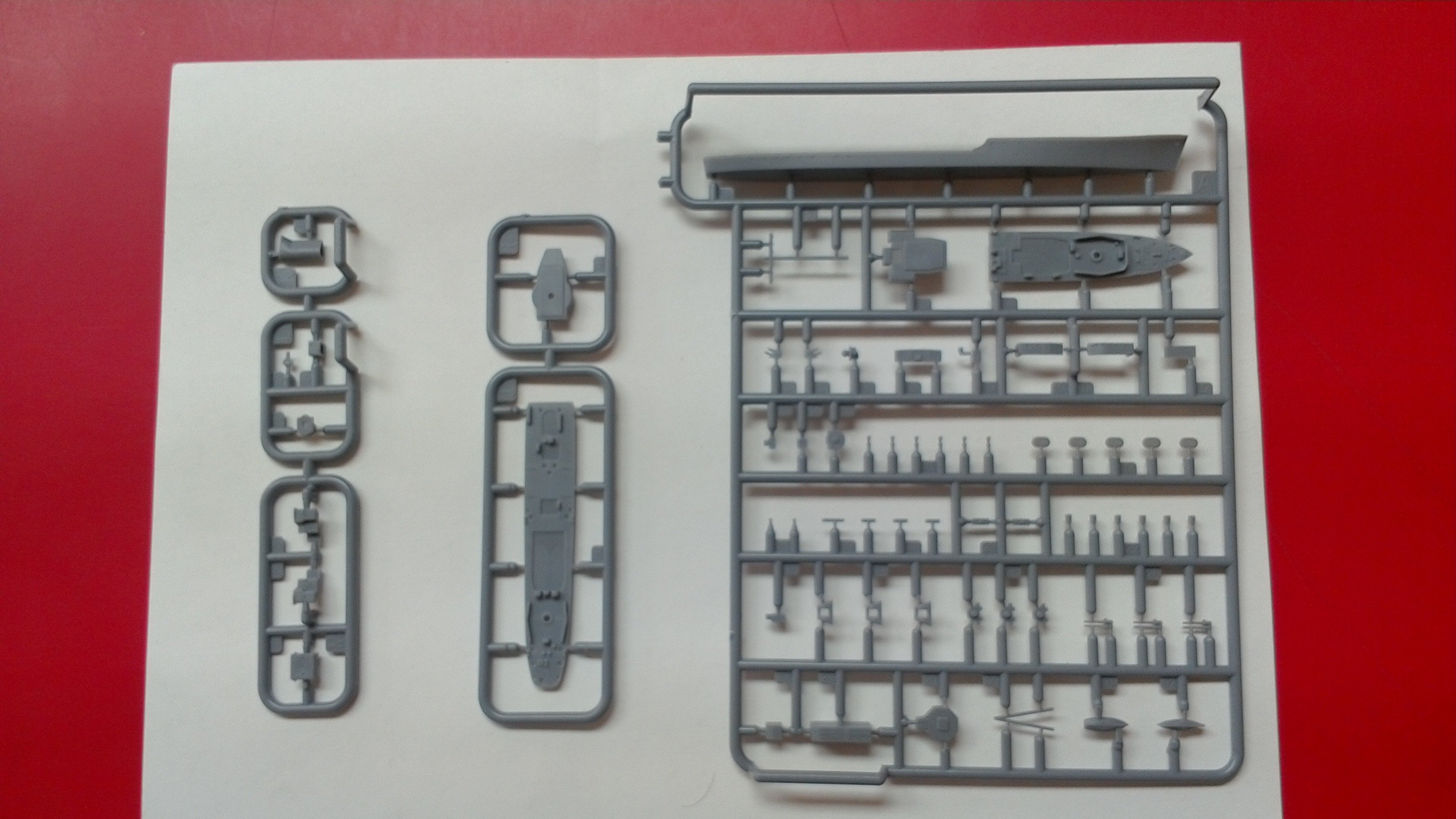 First up is the large sprue (sprue a) which contains the single piece hull, main mast, foscle deck, bottom part of the bridge, assorted bits and bobs, and the weapons, life boats and rafts. 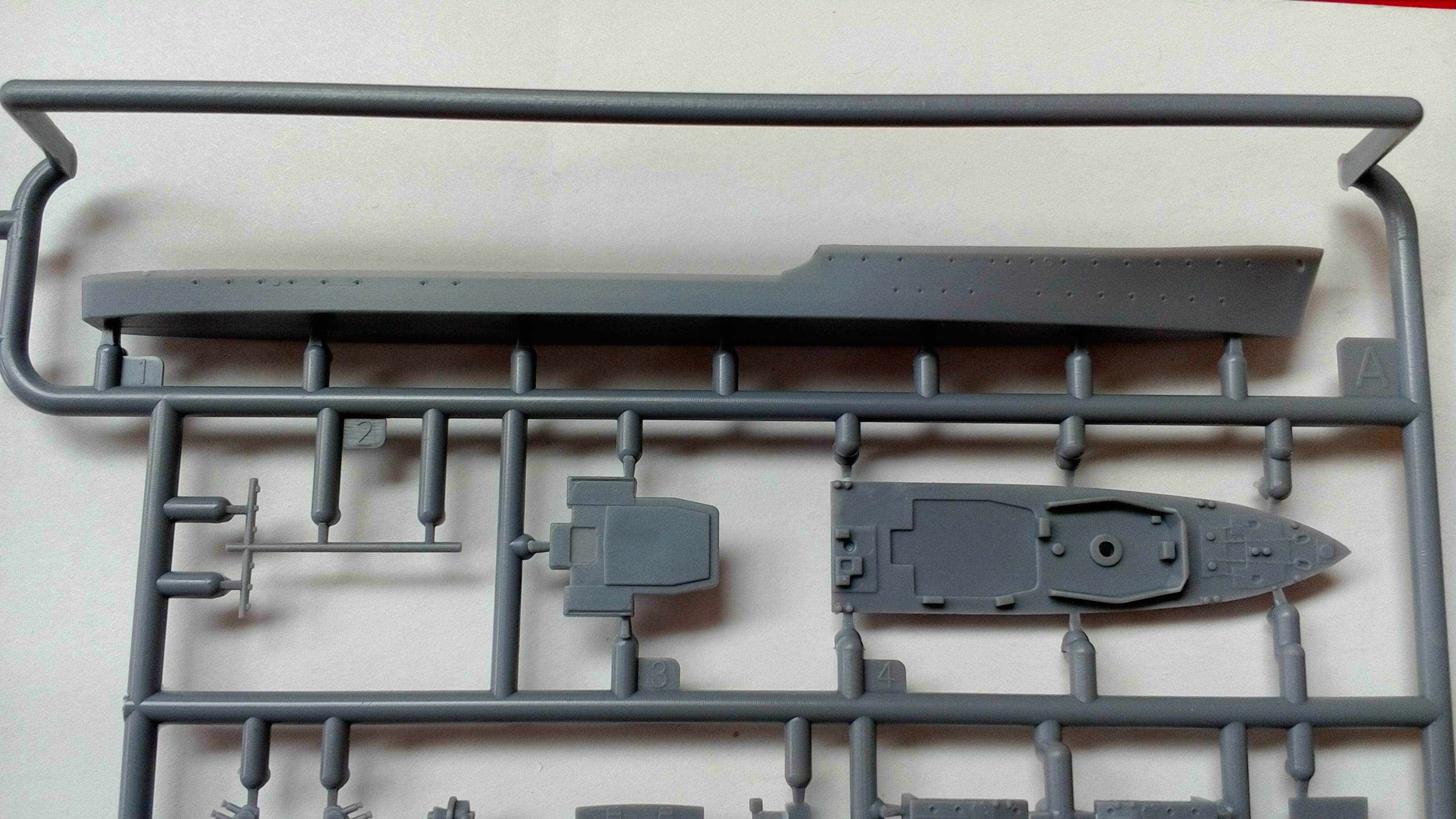 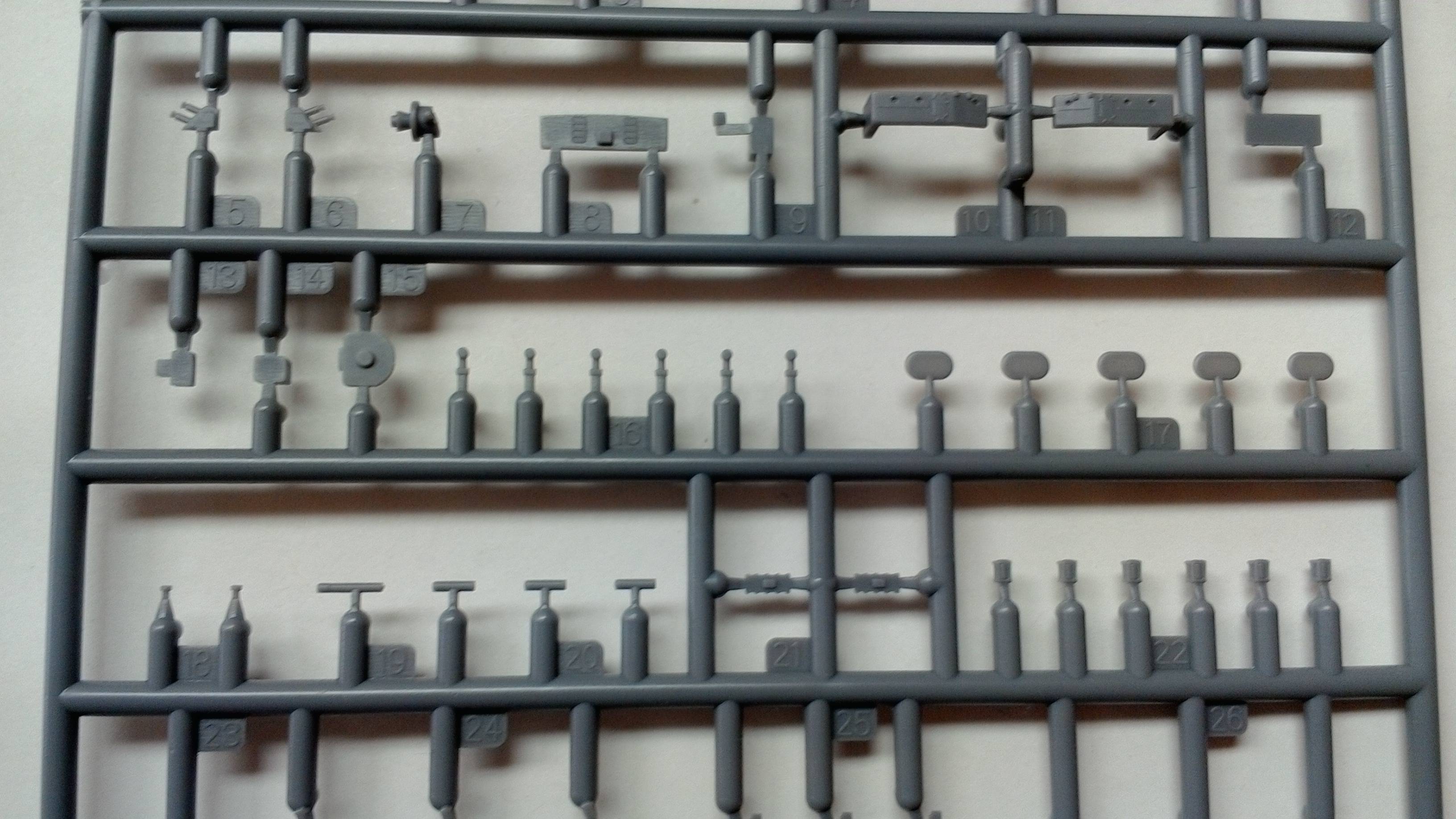 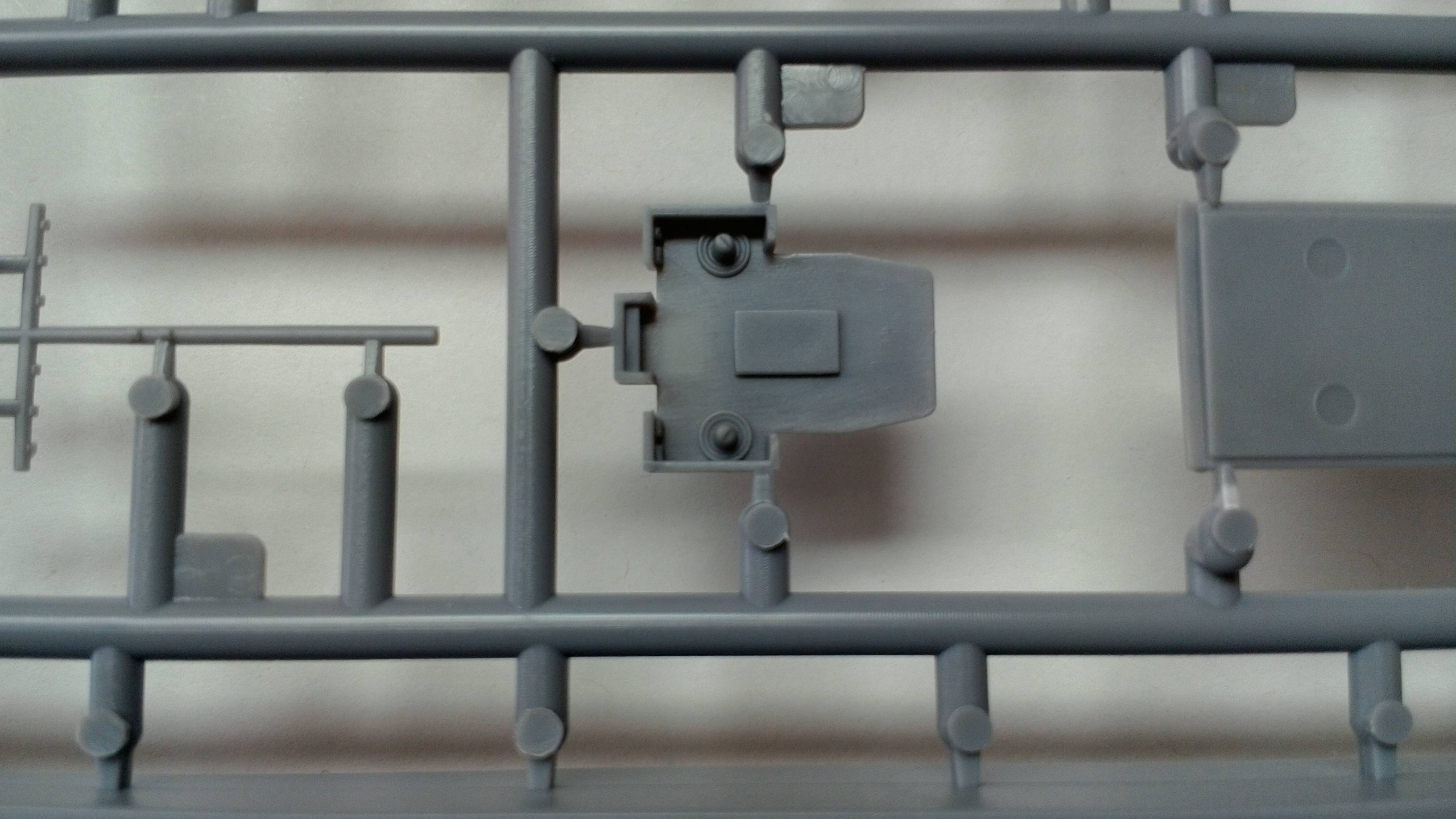 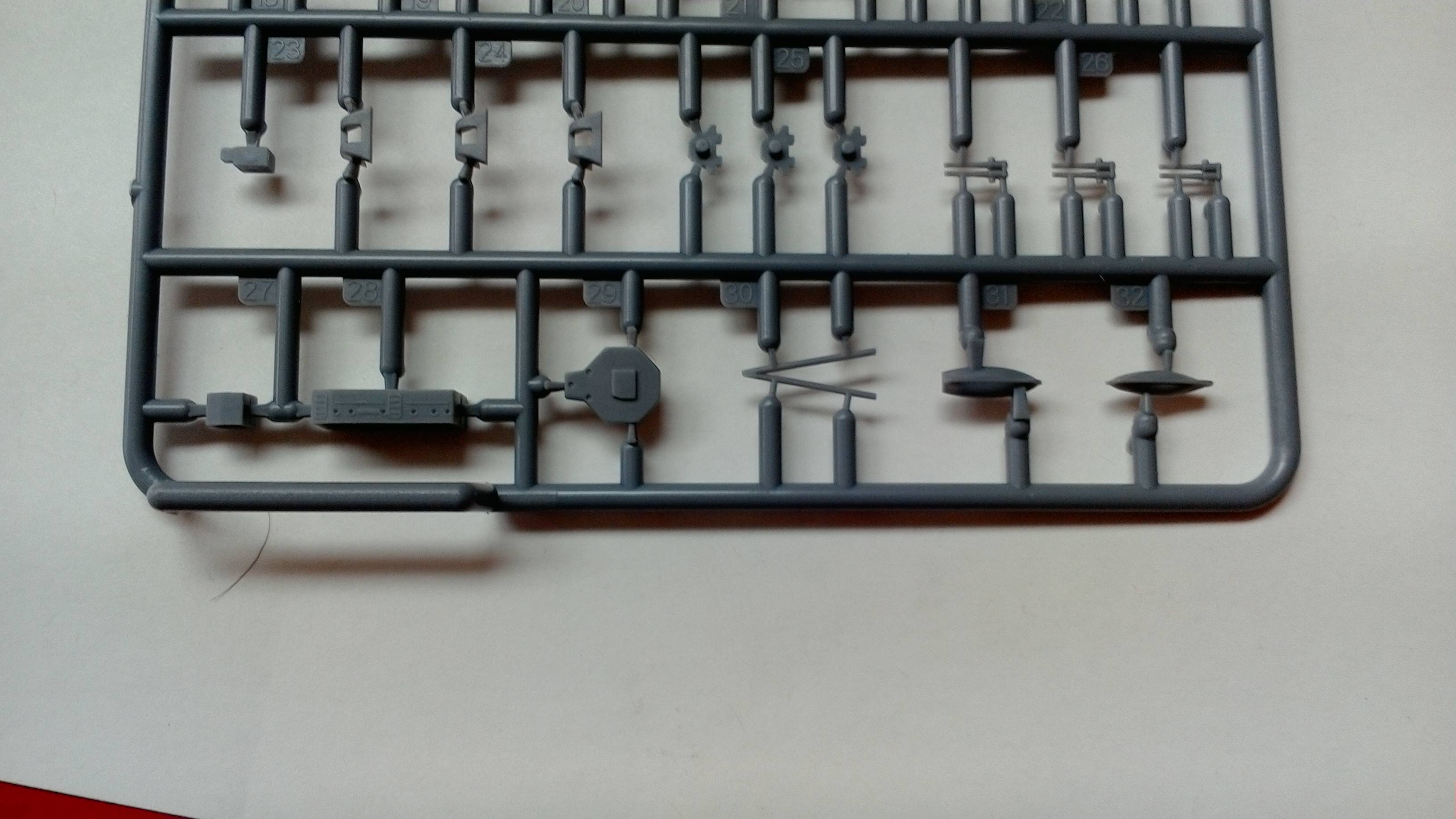 Sprue M has three pieces used for the construction of the bridge. 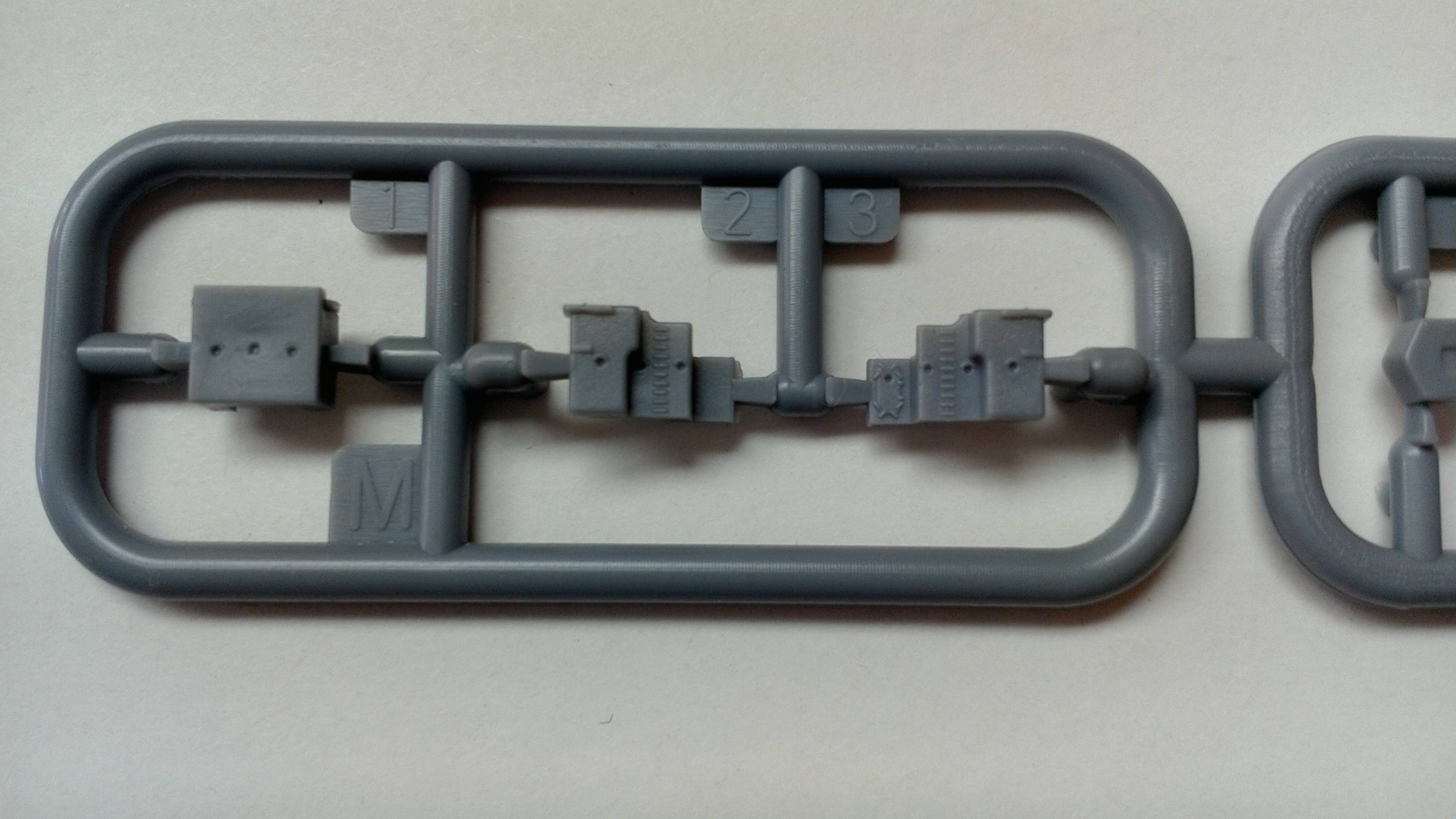 Sprue L has three pieces, two of them for the searchlight platform and the other piece being the search light itself. 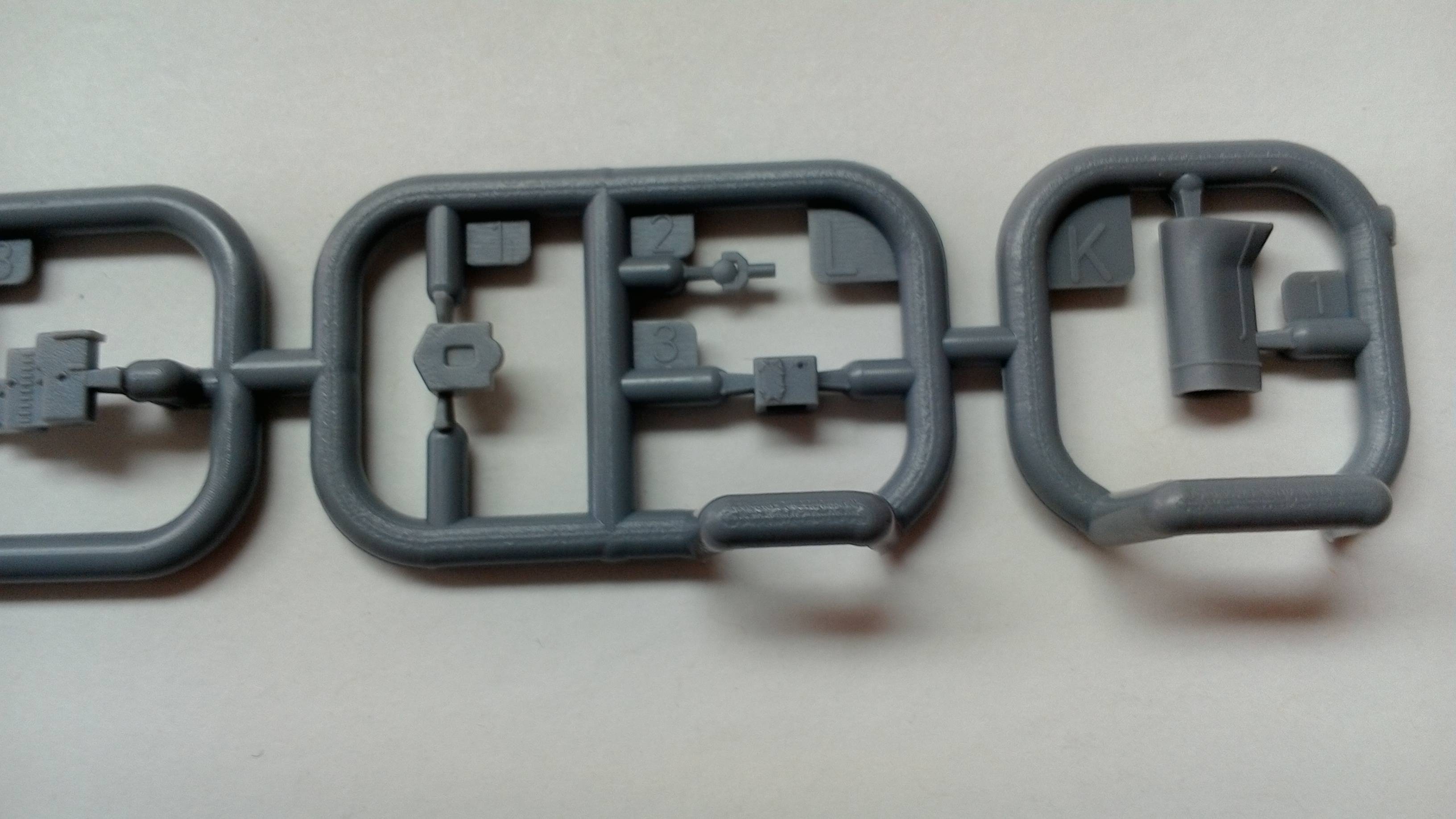 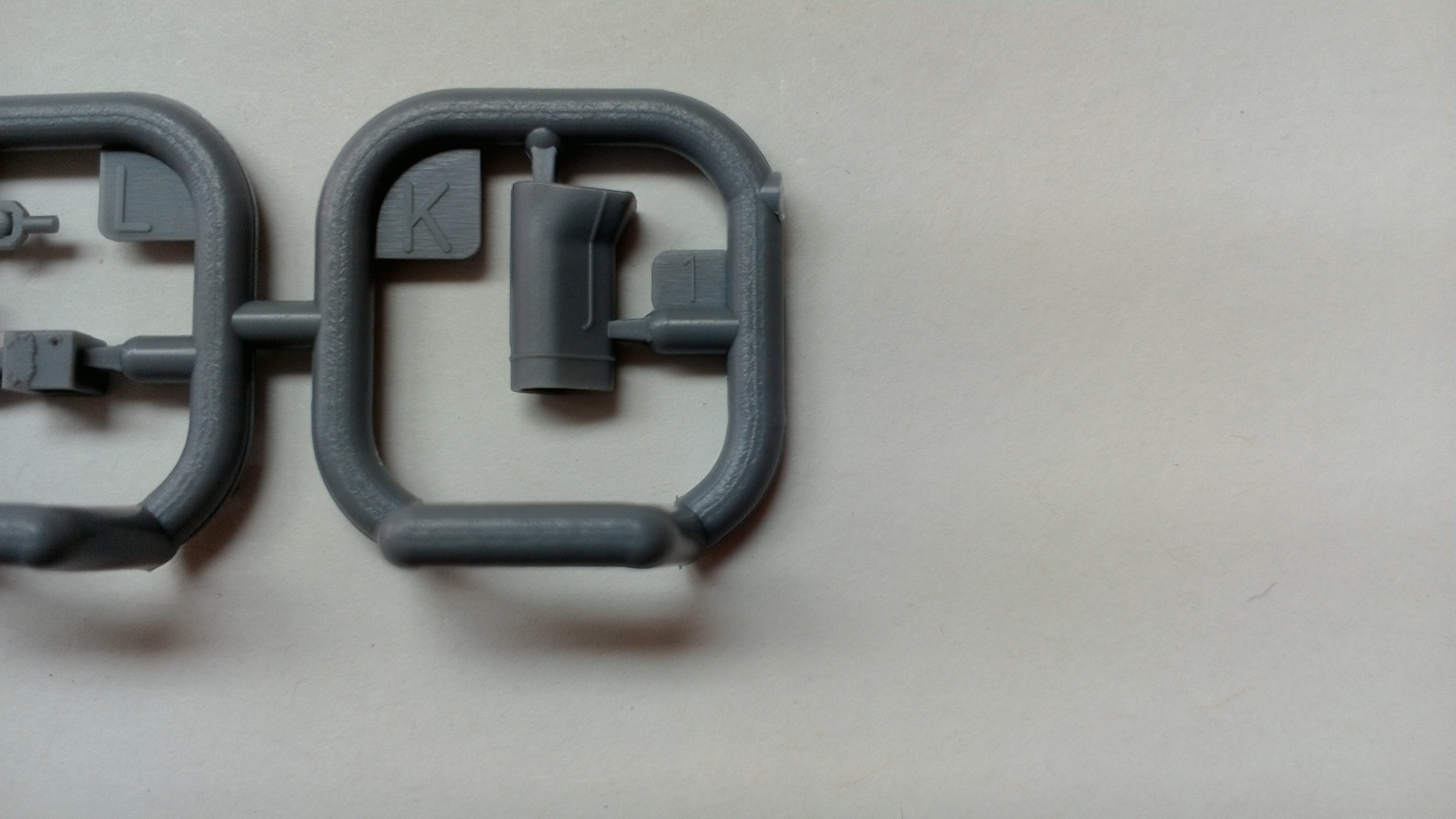 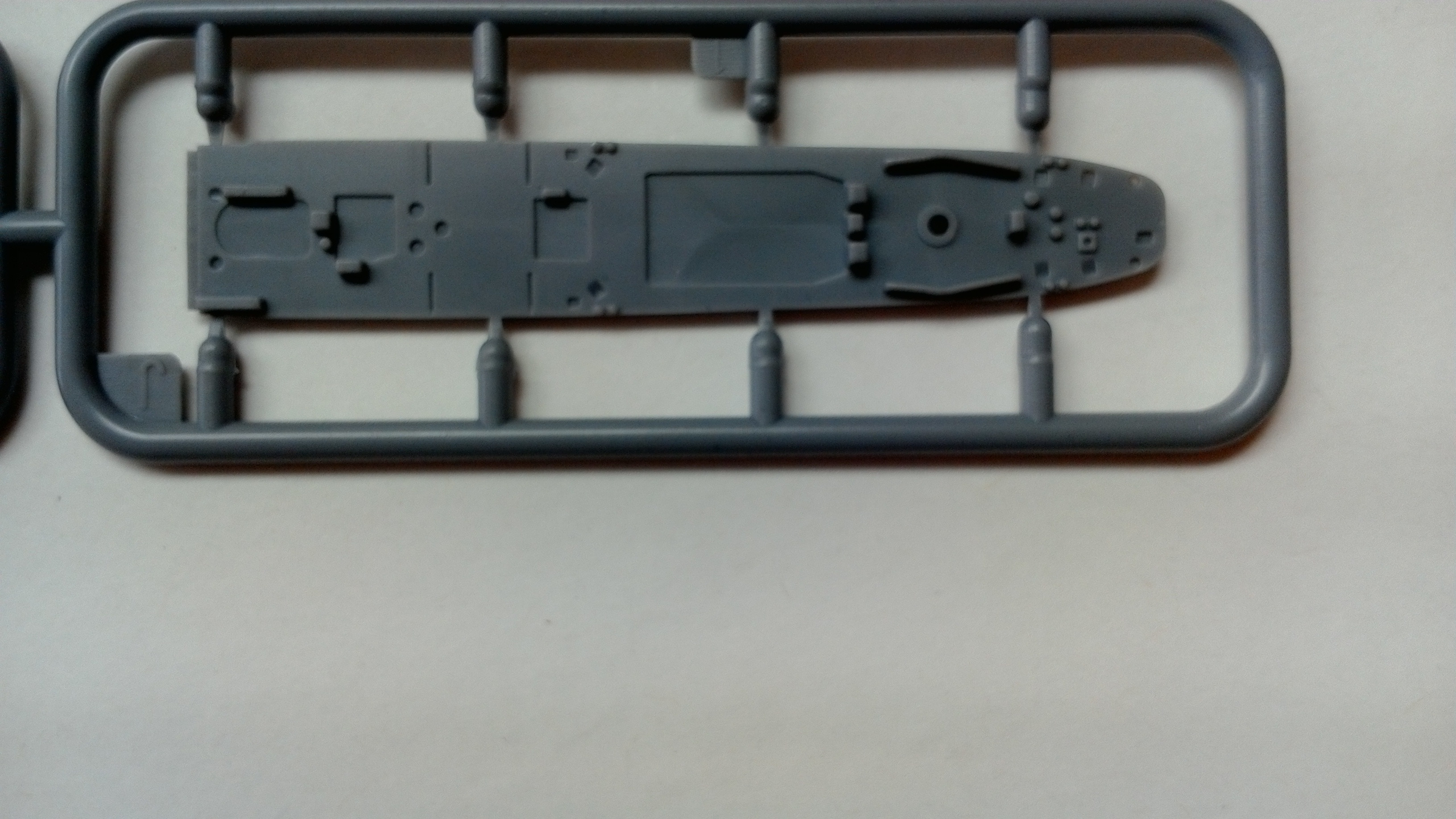 Sprue I has another superstructure part. 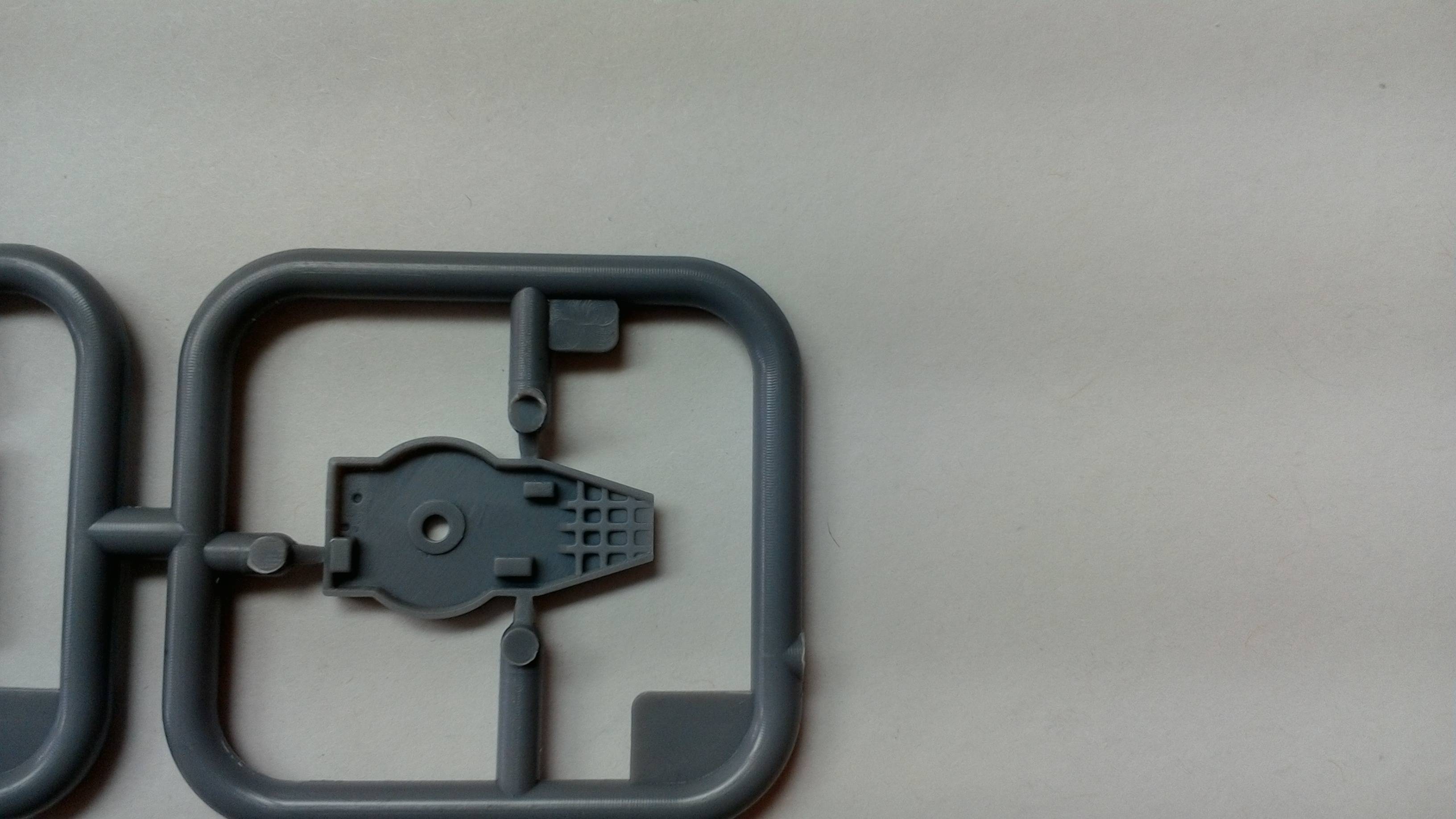 Then we have the decals which contain markings for all the available Hunt II destroyers. It has three flags for the Polish navy and two British navy flags, all of these are depicted stiff instead of wavy. The single photo-etch fret contains the railing and hoists for the lifeboats and depth charges. Also included are supports for the bridge wings, ladders and 20mm machine guns. 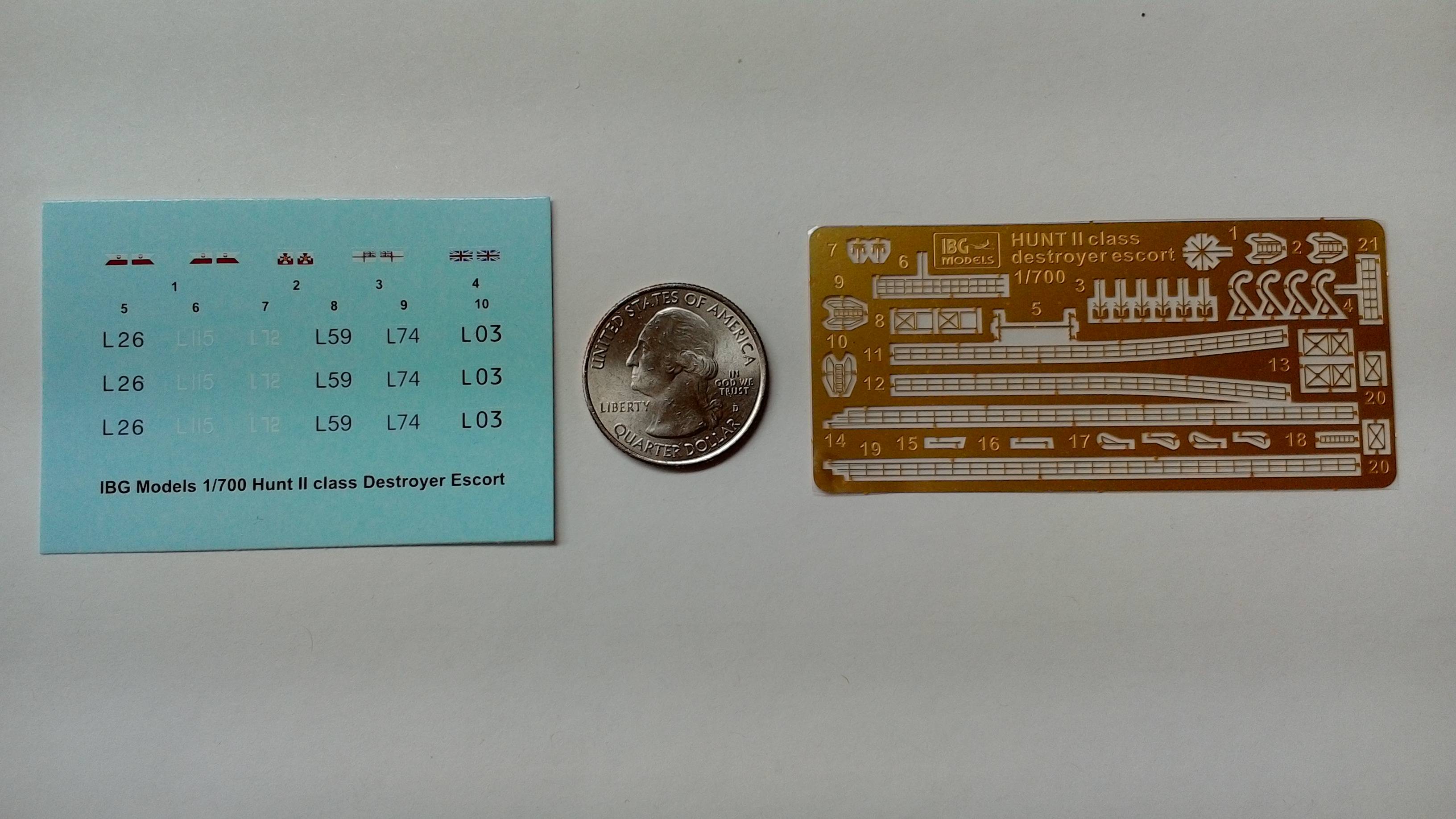 The pieces have no signs of flash and are very well molded. The details on the pieces appear to be of very good quality. There arent any complaints that I can make, except that the yagi antennas and the antenna that should be on the front part of the bridge were not included, possibly due to how small they would have been at 1/700th scale, but I am kind of glad they werent there cause it would have been a nightmare getting them in place at this scale.

It should build up to be an excellent kit.