REPLY & QUOTE
Mechworker (Adam Rehorn) said
One of the things I like most about aircraft, well any vehicle actually, is the ways in which the various models of it can vary. I am a huge fan of variants, and theres little I like more than the two-seater of a one-seater aircraft. This is almost a universal thing for me, and its not a surprise that if theres a trainer version of a given plane I have gone out of my way to get my hands on it. Ill often turn down the one-seater until I have gotten the two-seater!

A perfect example of this is the mighty Su-17/20/22 Fitter family of swing wings. I particularly like this one, since its a massively re-eingineered swing-wing variant of the fixed wing Su-7. Of course, thats only the start. Given that theres also a two-seater of this plane, you can imagine how eager I was to find a kit of one of THOSE. Now, there is a nice Bilek out there, but theres also the old Hobbycraft. Not as many people know about that one, and its not as sought after. Of course, thats the one I was able to find!

Check out this oddly Canadian kit, made in China, of a Russian export-model airplane below. P.S. Bring your aftermarket decals! 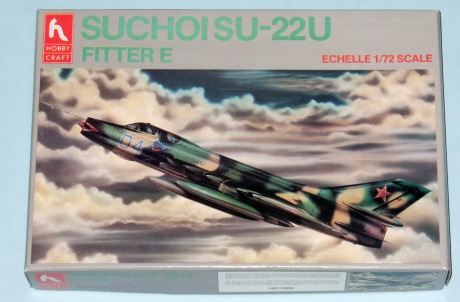