Air Campaigns
Want to start or join a group build? This is where to start.
Hosted by Frederick Boucher, Michael Satin
Edgar Brooks Memorial Spitfire Campaign

Actually leaning that way Chris, I have his book Spitfire Patrol and this would be a good excuse to read it.

I've built a couple of the Mk.IXs and am hoping this one won't be much different, they went together pretty well for limited run. As for the Hurricane Ernest, it looks like a nice kit in the box but I gather there are issues with the wing to fuselage join. Look around for build reviews, I think there are a couple of ideas out there to deal with that cleanly.

It's at the bottom of the list in 2015 campaigns since it was added last. You can find it here.

REPLY & QUOTE
BlackWidow (Torsten Rossmann) said
Thanks Michael! Just added 2 photos to the gallery (the first!). Hope to see lots more in the coming months.
I found only the Amorama campaigns when I looked. Guess I need new glasses ....

I have the majority of the interior detailed, I just need to add finishing touches the seat and armor plates so I can close it up. I may end up cutting the door open if I think too much is hidden.

Maybe I should at least build one Spitfire..., 1 should be enough

BTW fantastic builds here, followed up since a while.
Thomas

REPLY & QUOTE
SaxonTheShiba (Ian) said
Wow...fantastic slew of Spitfires in the campaign. I am a little late in jumping onboard but my contribution will be an ICM 1/48th Scale Mk.XVI bubble-top. I plan to use Cartograf Decals from the excellent Kagero Mk. XVI book. The plane will be finished as either Polish, Canadian or Free French....great schemes, just can't decide which one to do yet.

REPLY & QUOTE
BlackWidow (Torsten Rossmann) said
Last weekend we had our expo in Mannheim and I just want to show you guys, how I presented my latest Spitfire there for the first time .... 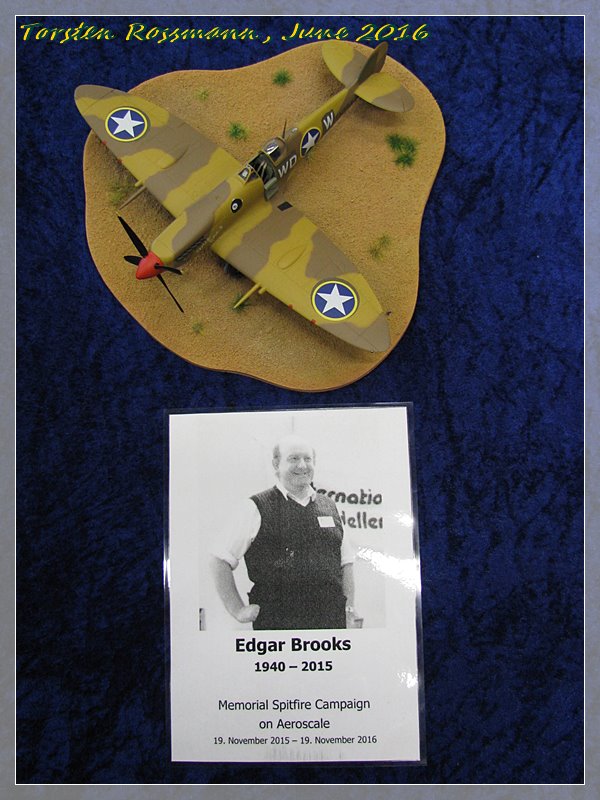 Last weekend we had our expo in Mannheim and I just want to show you guys, how I presented my latest Spitfire there for the first time ....

Believe it or not, this is the first time I've seen a photo of Edgar.

To tie in with reviewing Alclad paints, I've gone for a quick build of Tamiya's Mk.1 to try them out on.

I made a slight tweak as I reckon the aircraft I'll be building would most likely have had armour plate fitted, so I used Airfix's kit as a template to cut some from styrene sheet:

I've used Alclad's own gloss black primer as a base for a coat of Aluminium:

And masked with Press 'n Seal before applying Grey-Green:

Despite being low-tack - the Press 'n Seal still damaged the finish slightly, so be careful...

As for the new Mil-Spec Greey-Green, it came out a tad dark against the paint chip in the my copy of the RAF Museum handbook (do note, though, that there have been reports of the colours varying slightly between copies - little is guaranteed 100% in this game, is it...):

I've since resprayed with a lightened coat.

Following a small operation, I've got a couple of weeks' recuperation ahead of me, so I hope to crack on a bit with this and other builds that have been neglected lately.

REPLY & QUOTE
ludwig113 (paul) said
hi all, i have very slow internet at the moment, so no pix. my spit just needs a clear coat and then it will be done, will sort pictures as soon as i can.

Yesterday, all parts have arrived and now I can begin with a Spitfire MkI.

It is the Tamiya kit and I will add some PE-Parts. Additionally, I bought some literature to make this Spit more accurate. Hopefully, it will work!

Are there any traps known in building the Tamiya kit?

REPLY & QUOTE
darreng (darren greenwood) said
The first of three Spitfire's (so far). This is the weekend edition. And I'm not doing the options that are on the marking options.

very nice kit You have chosen there! It seems to offer lots of fun.

Progress so far on the Tamiya kit:

I haven't posted an update in some time but have made a lot of progress. I closed up the fuselage and finished the major assembly, then primed it with Mr. Surfacer 1500 Black. I added MM Chrome Silver to the wing roots and masked a heavy wear pattern with Maskol before applying the Day Fighter Scheme.

The black primer base worked great for greys but did cause a little bit of contrast difficulty between the RAF Ocean Grey and Medium Sea Grey. They looked too similar so I faded the Medium Sea Grey with White and applied a thin coat to lighten it up. I am much happier with the contrast now.

I made masks with frisket film and sprayed the RAF Dark Green next, then lightened panels with a mix of RAF Dark Green, Yellow, and White; 3:1:1. All paints for the Day Fighter Scheme were Tamiya thinned with Mr. Color Leveling Thinner. These newer Tamiya colors are excellent matches IMO, no mixing necessary to achieve the correct color.

The black base made for easy panel highlighting of the RAF Ocean Grey, I just left the coats thin to keep darker tones along panel lines or other areas. This made it easy since now I only had to add highlights to the RAF Dark Green to give the whole scheme a faded appearance. I like this technique a lot for two-tone camouflage schemes, one less layer of paint on the model.

A little masking tape pulled sharply off the roots left the underlying chrome exposed. I will tone this down a lot with further weathering so I wanted a bright shade of silver to start with.

Wing walks were taped off and sprayed with Tamiya NATO Black, they look much better than decals.

Eagle Strike include the fuselage band as a decal but their particular shade of RAF Sky is a bit darker than either of my two paints on hand: Lifecolor and Model Master. The propellor nose, fuselage band, and ID letter codes on Lima Challenger are all in RAF Sky so I wanted them to match as best I could. I ended up adding a bit of RAF Dark Earth to the RAF Sky and it came out to a close match between the paint and the ID letter code decals. I used this to shoot the nose and the band. Hopefully a little weathering will tone down any remaining difference.

I am giving the paint a day or two to cure in my warmer then I'll do some chipping before gloss coat and decals.

REPLY & QUOTE
darreng (darren greenwood) said
Thanks Oliver. I've built all of the Eduard Mk.IX's and I loved them. This one is just as enjoyable. So been working on this in between caring for Mum. Now most airplane builds start with the cockpit. I started with the walls of the u/c bays.

I then drilled out the holes in the bulkhead.

And added some details and plumbing to liven it up.

Chipping done with a few Prismacolor pencils; warm gray for the upper surfaces and white for the underside. I tried a few different shades of green but they were all too bright against the faded RAF Dark Green and I ended up liking the warm gray against both upper camouflage colors. Everything should tone down under varnish and washes even more, so I am hoping to just have some subtle chipping left behind in the end.

Hopefully I'll get some decals down this week.

REPLY & QUOTE
darreng (darren greenwood) said
The Spitfire is currently in paint. So hopefully something to show after the weekend (hopefully)

REPLY & QUOTE
ludwig113 (paul) said
ok, here it is,
the decals i used were a real pain and there was a problem with the clear coat but the kit itself is really nice.


p.s. sorry about the pictures, i'm having real big problems with photobucket and other image hosts due to bandwidth here at home.