REPLY & QUOTE
First In Last Out - Follow the Sapper

"We sleep soundly in our beds because rough men stand ready in the night to visit violence on those who would do us harm."

REPLY & QUOTE
There is a time to laugh and a time not to laugh, and this is not one of them.

REPLY & QUOTE
First In Last Out - Follow the Sapper

"We sleep soundly in our beds because rough men stand ready in the night to visit violence on those who would do us harm."

REPLY & QUOTE
Hisham (Hisham Haikal) said
Thanks for the review, Ian.. the setup looks really nice. Wish I had enough space to do something like that

REPLY & QUOTE
SgtRam (Kevin Brant) said
The stuff the do looks great, and after selecting everything I would like, there was a bit a sticker shock, including shipping to Canada. Nice review.

REPLY & QUOTE
Maki (Mario Matijasic) said
Looks very nice. I was thinking about getting some of these but I'm a bit intimidated by the price... Thanks for the review, Brian!

REPLY & QUOTE
PaulBrickles (Paul Brickles) said
This is a superb system and is well built.

REPLY & QUOTE
vettejack (John) said
I've seen similar desk storage units, but I noticed how much modeling space is taken. Granted, having everything in front of you gives exceptional access, but I came up with my own modeling work area with the two following pics from Ikea. I bought the 16 unit storage shelf and the worktable attachment (along with two closets for large items). I think the shelves and table come in at least 4 different colors. Then, for storage of your modeling supplies just go to Walmart and get the plastic bins most suitable for your use to put in the 16 shelf surface area. The 16 cube shelf unit is about $150 and the table goes for about $102. So, for about $250 your storage is at your side leaving the table completely open.

REPLY & QUOTE
Tojo72 (Anthony) said
Way too organized for me

REPLY & QUOTE
jfeenstra (Jon Feenstra) said
I purchased about 15 of these Hobbyzone modular units about 6 months ago when they were first released and they are easily one of the best purchases I have made and have helped organize my workspace in a big way. Somewhat expensive, but anything custom built for a specific task will always be more and these have been designed with the modeller in mind. I even turned the paper towel unit on end to fit the space I needed. Also, since Hobbyzone themselves would not deduct the VAT, as they should for overseas customers (I'm in Canada), I purchased from Pk-Pro in Germany. Great customer service and can order quickly what they don't have in stock. I think the shipping was slightly cheaper too, but still about 60 Euro - being solid wood they are heavy,

REPLY & QUOTE
35th-scale (Sean Mullarkey) said
Hi Ian, how are you finding these after having had them a year? I'm thinking of getting some of the units and would appreciate your feedback now please. Any picture of how they look after a year of use?

REPLY & QUOTE
SEDimmick (Scott ) said
Here is my setup in various stages of completetion with the system. Found the oil paint holder to be pretty much useless and replaced it with another bottle setup. 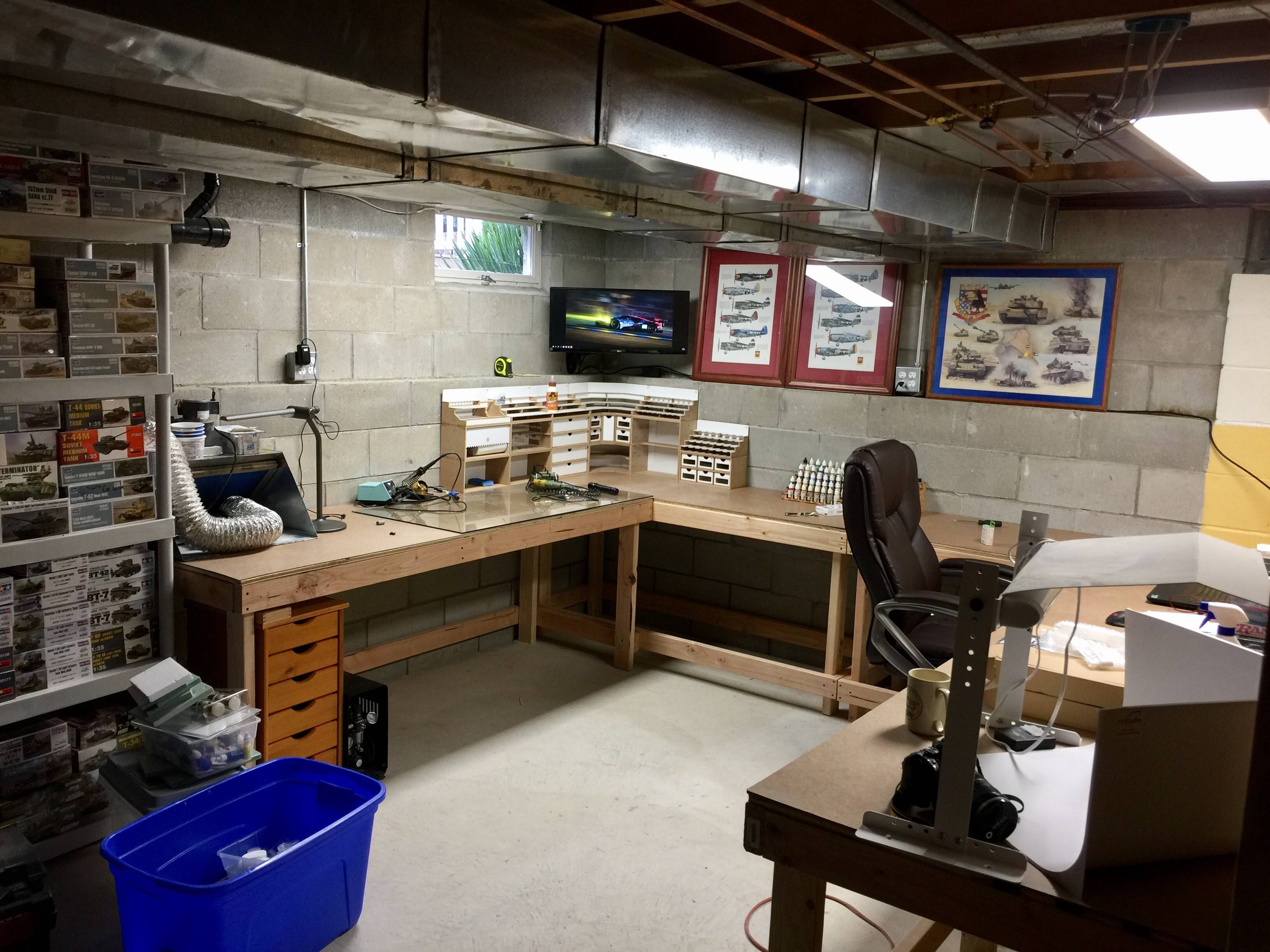 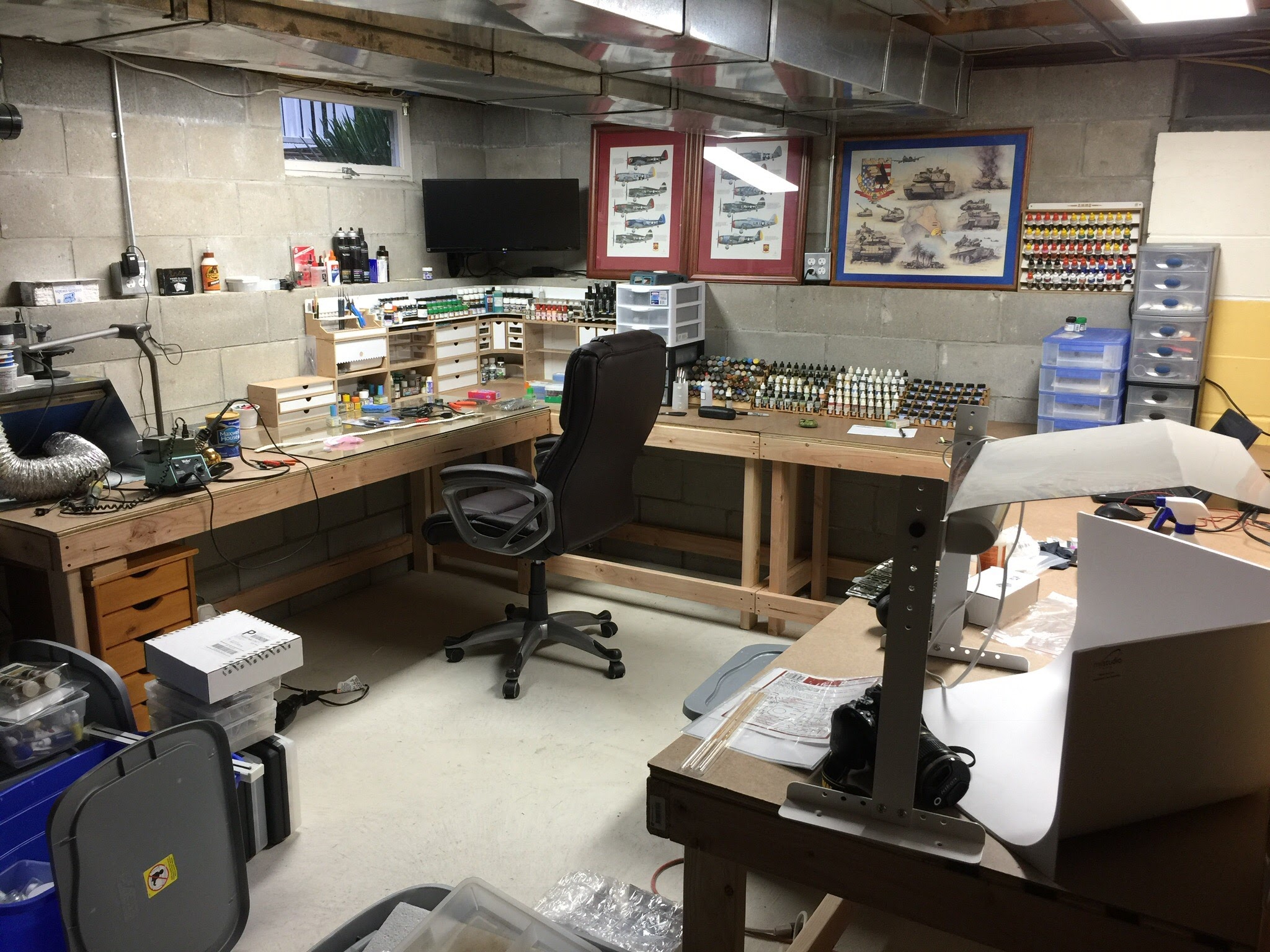 REPLY & QUOTE
jfeenstra (Jon Feenstra) said
I've had mine for about 18 months - I bought them when they were first released. This is easily one of the most innovative hobby products released and I would recommend them to anyone. They keep everything organized and really were developed with modellers in mind. Well worth the money!

REPLY & QUOTE
duttons (Scott Dutton) said
They seem quite durable, I gave mine a spray of varnish so they wouldn't soak up any spills of thinners etch on the bench as I was concerned due to the type of material.
Works a treat, about to order some more, can't gave enough drawer units.

I'm very happy with them outside of the oil paint holder they make..they didn't work well with some the brands of oil paint tubes I had. Otherwise they work great. The only "problem" I have now is I actually have too much storage space for smaller things, because I also have two wooden tool chests next to my desk that I used prior to getting them.

REPLY & QUOTE
Youngun (Alex) said
Likely a stupid question, the green desk mat. Where can one find one of those. I have a new workbench and my old desk mat was thrown out. I've seen them in many posts on here but can seem to track it down.

Likely a stupid question, the green desk mat. Where can one find one of those.

An unasked question is stupid.

You can get these at Michaels, Hobby Lobby, Amazon, art supply stores, etc. Oh, and you want a self-healing mat.

REPLY & QUOTE
ESSAYONS!
"Man does not live until he looks to the future, and that is his salvation in the worst of times.".... (Author Unknown)
AMPS #2102

REPLY & QUOTE
barra733 (Ian Barraclough) said
After a years use I find these still to be the best thing that's happened to my modelling desk! They are durable and provide all the storage I need - I've even added a self made 'go to' tool holder that holds my everyday tools at 45 degrees directly in front of where I work. The only downside I can mention is that if an area gets wet, the soft MDF deforms and can peel. This has happened directly beneath where I store three pipette droppers that I use for thinners and water.