Ships by Class/Type: Destroyers
This forum covers all types of destroyers from all eras.
Hosted by Jim Starkweather
FREMM Aquitaine - Gwylan Models 1/700

Another model recently arrived at my yard: the FREMM Aquitaine Frigate - French Navy (Marine Nationale) by Gwylan Models at 1/700 scale.

This is my personal review about this kit. Hope you like.


The real ship:
The Aquitaine ASW frigate is the first ship of FREMM (European Multi-Mission Frigate) class operated by the Marine Nationale (French Navy or La Royale), which also includes the ER (Extended Range) version.
As for the Italian Navy FREMM, both GP (General Purpose) and ASW (Anti-submarine Warfare) versions of this ship are now in service, but they have different armament and sensors configurations as well as dimensions.

The FREMM Aquitaine has a displacement of 6.000 tons, length of 142m, beam of 20m, maximum speed of 28knots and range of 6,000nm with a cruising speed of 15knots.
Each vessel can accommodate an NH90 ASW helicopter and carries two RHIBs for commando operations located in closed bays in each side of the ship.
The ship has a crew of 108 but can accommodate a maximum of 180.

To date only the ASW version has been exported for the Royal Moroccan Navy which purchased its Mohammed VI FREMM frigate in 2014.
Although similar to the Aquitaine, does not include the VLS for the SCALP Naval cruise missiles as well the jammers and 20 mm guns Nexter Narwhal / Remote Weapon Systems.
The Egyptian navy is also due to receive the FREMM Normandie from the French Navy inventory, although negotiations are still proceeding by now.

The kit:
The 1/700 French FREEM Aquitaine (ASW) is the third FREMM kit released by Gwylan Models after the Italian FREMM Carlo Bergamini (GP and ASW versions), whose review is available at the following link:
http://www.modelshipwrights.com/modules.php?op=modload&name=SquawkBox&file=index&req=viewtopic&topic_id=235761&page=1#1988199

Hull:
This kit is cast as a single piece waterline resin hull, with excellent moulded details including the VLS cells, air vents and life raft canisters, among others.
As happened with previous models the sample Ive got is almost perfect although the hull requires minor corrections, but nothing serious.

As for the two NH-90 Caïman helicopters the quality is superb and allowing two different configurations to be built (unfolded and folded) with a specific photo etch parts.


Photo Etch:
The photo etch set is very complete and includes railings, antennas, mast yards, helicopter safety nets, doors for the RHIB bays areas on each side of the model, etc.
An extra photo etch set is provided just for the NH-90 Caïman helicopters and includes the main and tail rotor blades for two helicopters, with two sets for the folded option and one set for the extend version as well as the tail horizontal stabilizers.

Instructions:
As always, the instruction sheet included very clear and provides via a systematic methodology a very simple and easy approach to build model.
The location of the decals and PE parts are also very clear, and the only step on this building that requires extra attention is highly detailed mast, which requires 12 PE parts to be fixed.

Painting Scheme:
Although no specific colours reference is indicated in the instructions sheet, the manufacturer suggest Vallejo Model Colour 153 Pale Grey Blue for the hull and other vertical surfaces, deck houses, masts, funnel, etc.
As for the decks and other horizontal surfaces (flight deck included) the Vallejo 163 Model Colour Dark Sea Green could be a good option.

Conclusion:
Yet another fantastic Gwylan Models kit that Im sure it will please many modellers looking for modern 1/700 scale model warships, in particular for the FREMM fans!
Moreover, for those fans, Gwylan Models has just released the 4th version of the FREMM series, and the 2nd version of the French FREMM. In fact the so-called FREMM-ER (Extended Range) is already available and it seems that we will be able to get the all FREMM family, namely at 1/700 scale:

All 4 versions are now available.! 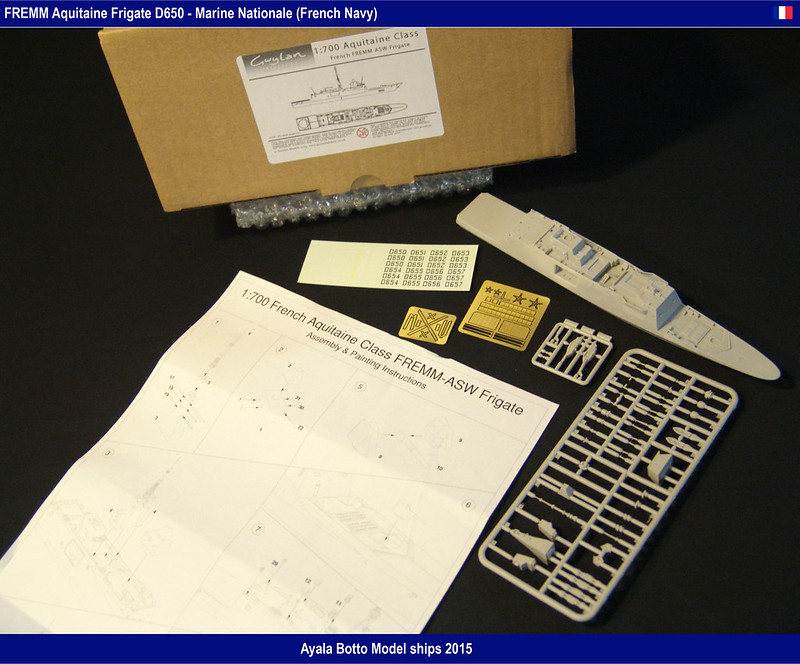 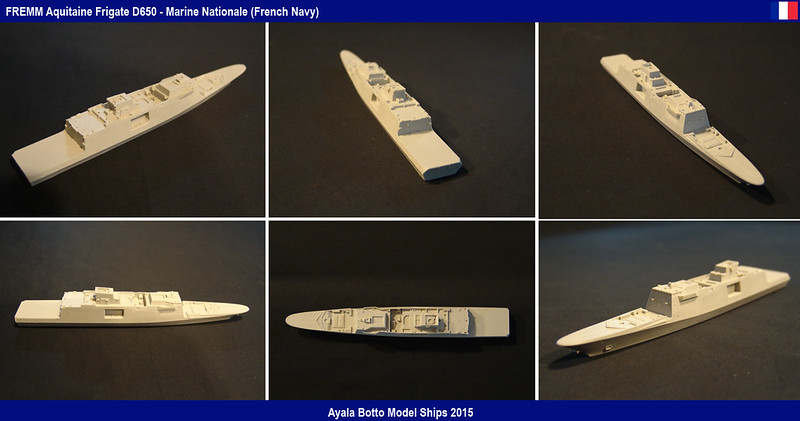 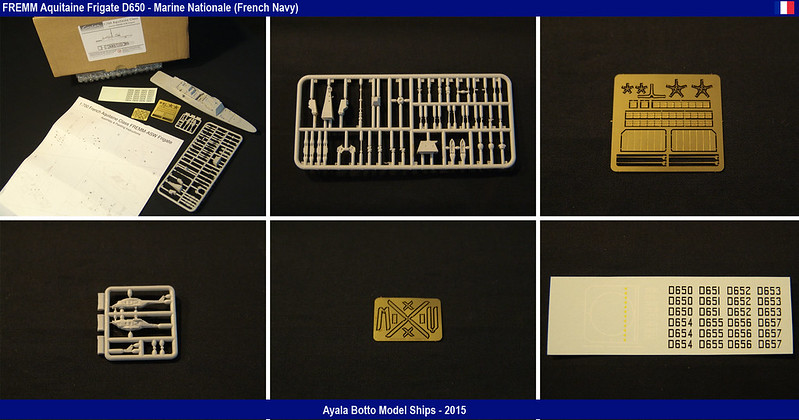 Current status of this project: 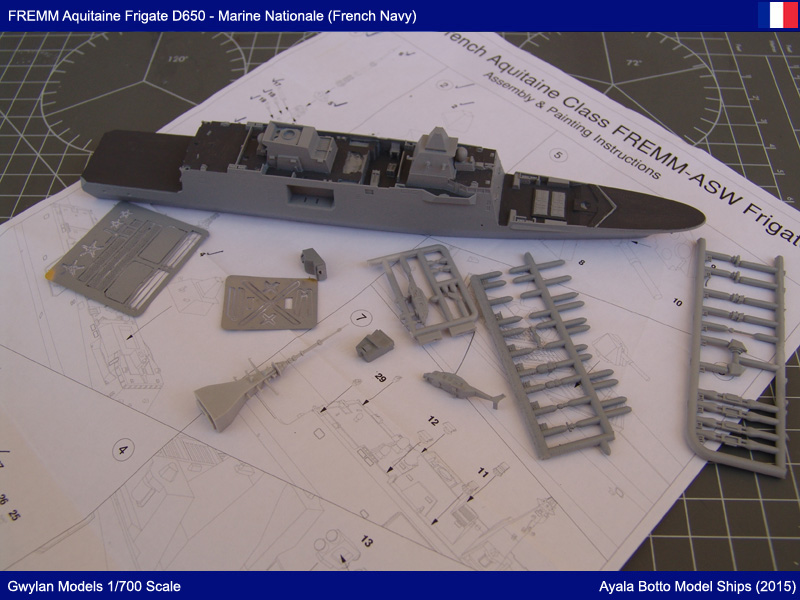 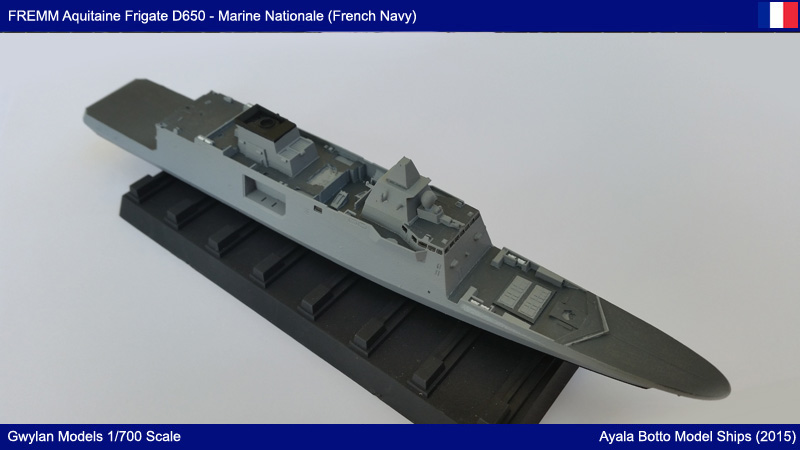 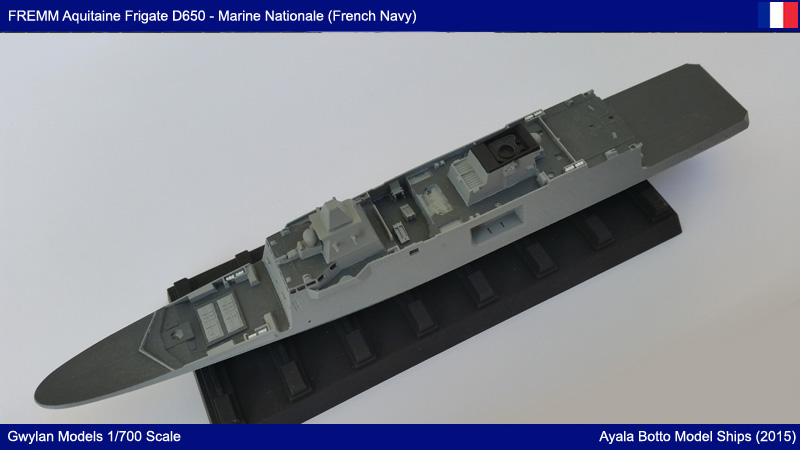 The first photos of this project finished: 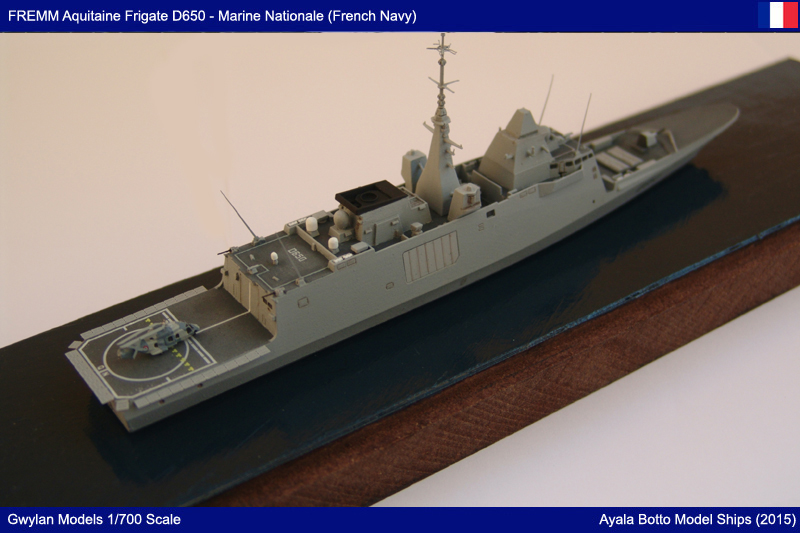 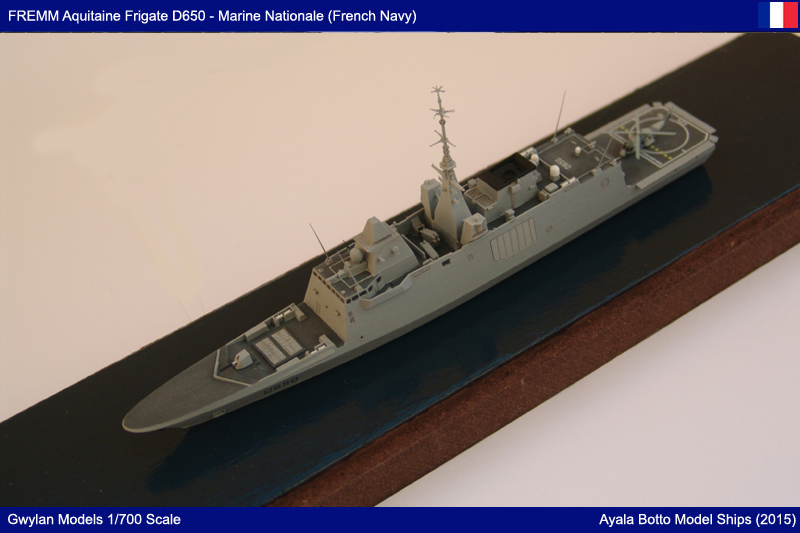 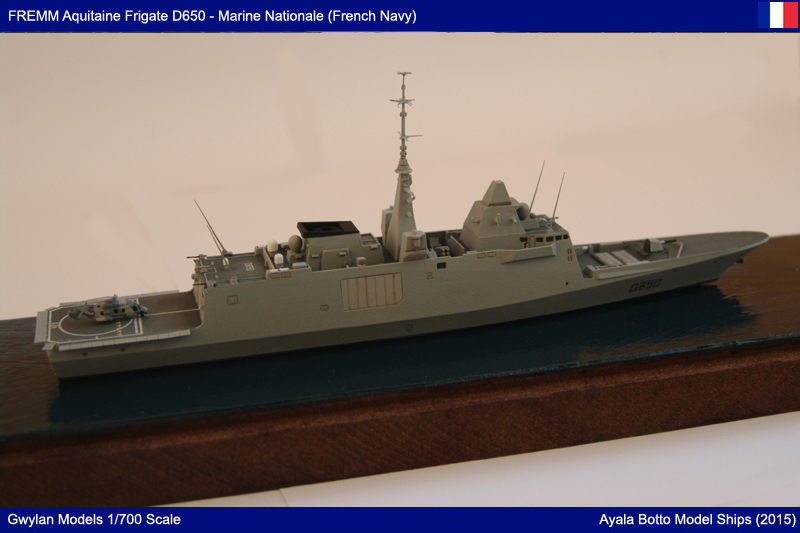 A question: what are those big vent or roll door-like surfaces on the ships sides? Are they intakes for the engines, or are there missiles behind them?

A question: what are those big vent or roll door-like surfaces on the ships sides? Are they intakes for the engines, or are there missiles behind them?

The doors on each side of the ship you mentioned provides access to the bays where the internal RHIB is located.

The following photo shows the RHIB inside the Starbord bay: 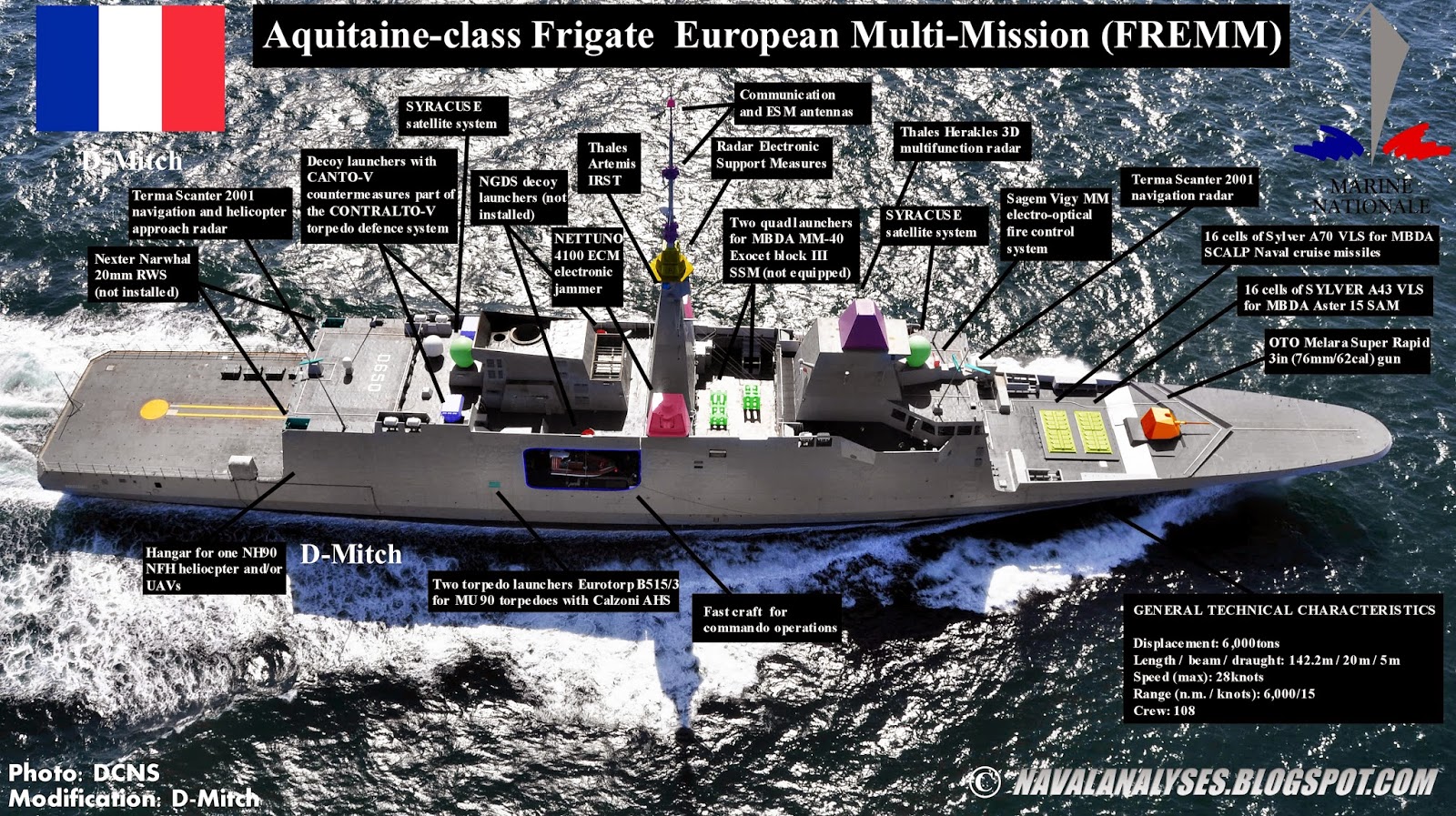