Ships by Class/Type: Destroyers
This forum covers all types of destroyers from all eras.
Hosted by Jim Starkweather
FREMM Carlo Bergamini - Gwylan Models 1/700

My review of the FREMM Carlo Bergamini Frigate of the Italian Navy (Marina Militare), model produced by Gwylan Models at 1/700 scale.

The real ship:
Carlo Bergamini frigate is the first ship of FREMM (European Multi-Mission Frigate) class, operated by the Italian Navy (Marina Militare) and is also the first ship of the GP (General Purpose) version.
The other version of the Italian FREMM is the ASW (Anti-Submarine Warfare), and four ships of this version are due to be delivered to the Italian Navy of a 10 ship class. The remaining 6 ships will be the GP Version.
Although each version has special abilities, both versions have important aeronautical capacity, including a double hangar that can accommodate two NH-90 helicopters and / or drones.
This ships are considered the 2nd generation of stealth frigates (after La Fayete class frigate), and are a joint program carried out by France and Italy, currently in service in the Italian Navy, Marine Nationale (French Navy), Royal Moroccan Navy and Egyptian Navy.

The review of the French FREEM Aquitaine is available at the following link:
http://www.modelshipwrights.com/modules.php?op=modload&name=SquawkBox&file=index&req=viewtopic&topic_id=235762&page=1#1988200

The kit:
The new 1/700 Italian FREEM Carlo Bergamini (lets called it Batch 2) model now released by Gwylan Models is a revision and improved Kit over the previous (Bacth 1) model launched on November/2013.

It corrects all issues reported on the Batch 1 edition and significantly increases the level of detail and quality providing the modeller an almost ready to build model.
The impressive single piece waterline resin hull cast also has the correct dimensions as for the helicopter flight deck is concern.

In fact the Italian FREMM Bergamini is 144,6 m (474 ft) longer when compared with 142 m (466 ft) of the French FREMM Aquitaine, and the new version now released also reflects this difference (3,7mm at 1/700 scale is itself not unimportant) when compared with the Bath 1 edition, providing a more realist and accurate model at this scale.

Gwylan Models (Bath 2) FREMM Bergamini, includes all parts needed to build one of the two version of the Italian FREMM: GP (General Purpose) and ASW (Anti-Submarine Warfare) with decals for all 6 ships of this class.
The GP version requires (1x) Oto Breda 127/64 mm gun and (1x) OTO Melara 76/62 mm gun located on the forecastle.
The ASW version is equipped two OTO Melara 76/62 mm guns (one located on the forecastle and the other on the Oto Breda 127/64 mm gun location) as well as two chaff dispensers (part 23).
All remaining parts are common to both versions.

Hull:
This kit is cast as a single piece waterline resin hull, with remarkable moulded details, including the VLS cells, air vents and life raft cannisters, among other details, and the sample Ive got was almost perfect as far as the need of sand paper and corrections is concern.

As for the two NH-90 helicopters the quality is superb and allows two different configurations (unfolded and folded). Also included is a specific photo etch further explained below.


Photo Etch:
The photo etch set is very complete and includes railings, antennas, 25mm gun barrels, mast yards, helicopter safety nets, and other parts for the FWD mast as well as the doors for the RHIB bays areas on each side of the model.
An extra photo etch set is provided just for the NH-90 helicopters and includes the main and tail rotor blades for two helicopters, with two sets for the folded option and one set for the extend version as well as the tail horizontal stabilizers.
For those modeller who wish to go even further beyond, there is a super-detail photo etch set for this Bergamini FREMM, available at Regia Marina M.A.S. Models.

Instructions:
The instruction sheet included in this kit are quite clear and provides via a step by step methodology a very simple and easy approach to build model.
As this kit allows to build the ASW or the GP version of the Italian FREMM, the alternative parts location and options are clearly identified and should allow the modellers to build the chosen version this kit without any major troubles.
The location of the decals and PE parts are also very clear, having in consideration that the AFT mast requires 12 PE parts to be fixed to the resin mast!

Painting Scheme:
Although no specific colours reference is indicated in the instructions sheet, the manufacturer suggest Vallejo Model Colour 153 Pale Grey Blue for the hull and other vertical surfaces, deck houses, masts, funnel, etc and the Vallejo 163 Model Colour Dark Sea Green to the decks and horizontal surfaces.

Conclusion:
A Gwylan Models stunning and superior casting quality model and a must have for your modern navy ship fleet!
This great value kit is available at Gwylan Model website for £27,50 (about 35,75) which is indeed an excellent price for such a highly quality, detailed and complete resin kit with photo etch parts and decals for all ships of the class.

Moreover, for the FREMM fans, Gwylan Models has just released the 4th version of the FREMM series, and the 2nd version of the French FREMM. In fact the so-called FREMM-ER (Extended Range) is now also available at 1/700 scale at the same time as the ASW version.
So all 4 versions are now available.! 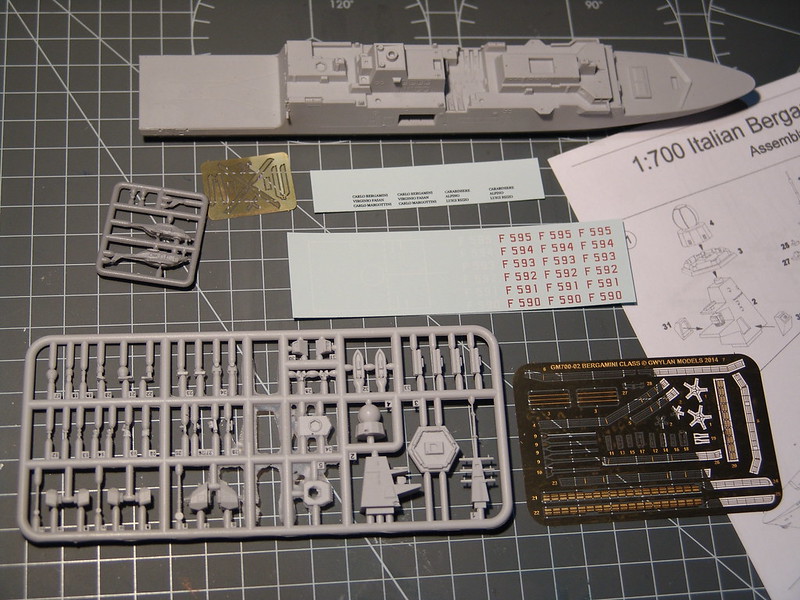 REPLY & QUOTE
TRM5150 (Todd Michalak ) said
Nice looking ship there Ayala! Thanks for the review! Looking forward to seeing her come together!

An article in French and English with high resolution photos is now available at: 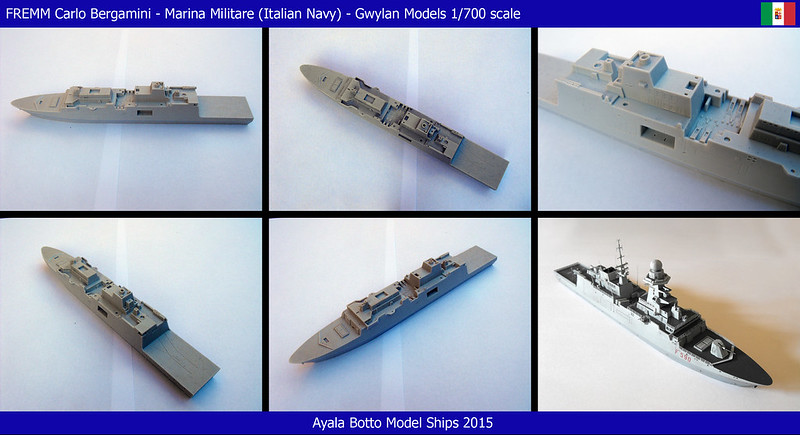 Meanwhile a couple of photos: 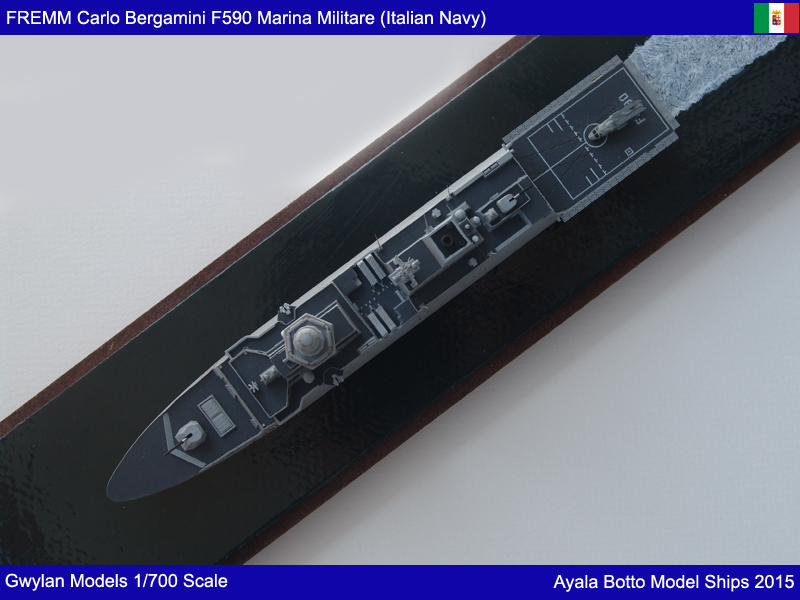 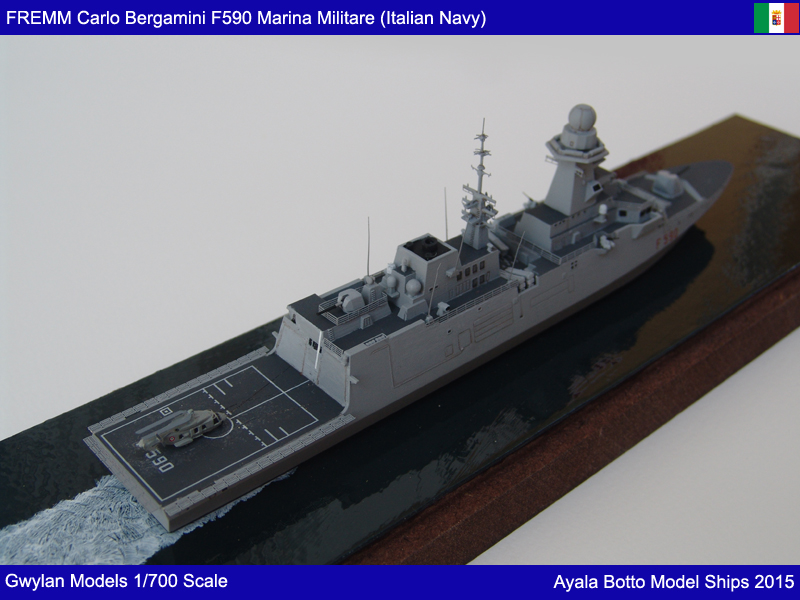 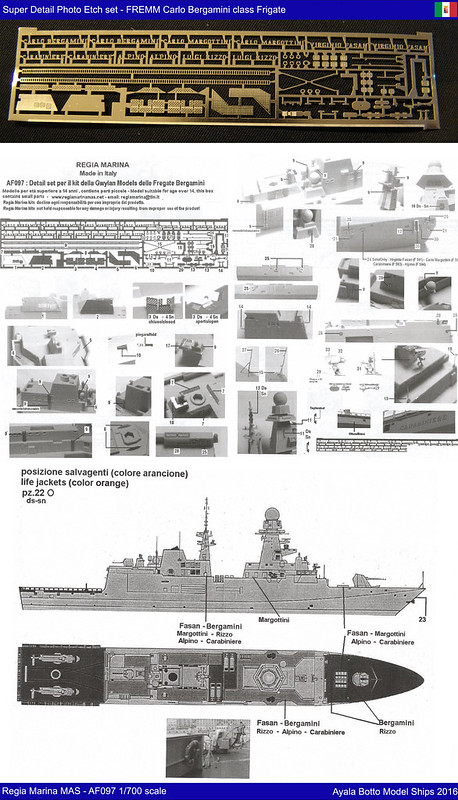