Air Campaigns
Want to start or join a group build? This is where to start.
Hosted by Frederick Boucher, Michael Satin
OFFICIAL: Vac and Resin Campaign

REPLY & QUOTE
Bigrip74 (Bob R.) said
Jonathan, after watching yours and Jesse's airliners I've become intrigued. Where do you obtain either media kits on 1/144 scale civil airline a/c kits? I just picked up a Roden VC-118 (Independence) kit for a couple of dollars and the bug bit

REPLY & QUOTE
Bigrip74 (Bob R.) said
Richard, love the jig you have built for your racer:

A little more progress on my Vindicator:

REPLY & QUOTE
tinbanger (Richard Tonge) said
My build is now ready for the floats to be added, so out with the plastic it's time to build a jig!:-

I nearly got all the parts of my little racer cut out and cleaned up. Want to start glueing soon, but we have over 35° C over here now, so it even hinders me at my favorite hobby :-(

REPLY & QUOTE
JClapp (Jonathan) said
hey Bob, there is an airplane in there! looks like a fair representation.
You have jumped the biggest hurdle, congratulations!

Bondo work is definately part of the art form.

Looking forward to seeing it come together.

REPLY & QUOTE
Bigrip74 (Bob R.) said
Ok! I am back at it with some issues re: the mating of the wing to the fuselage. Lots of putty will do the trick.

It must be said that building a vacuform is not an end in itself, so that in general, when an injection molded alternative is available there is no reason to build a vacuform. (unless that is, the IM kit is even worse, which happens.)

I agree about direct sunlight making for the best photography.

REPLY & QUOTE
BoiseBlade (Jeff-D) said
By the way taking pictures in the direct sunlight really made my pics come out better.....(I Think)
But it is 102 degrees today.....

REPLY & QUOTE
BoiseBlade (Jeff-D) said
I am calling this one Finito!
I will not say I really enjoyed the Vacuform build. It really makes you appreciate good model kits. Next time if I see another build in years to come remind me of this experience.

REPLY & QUOTE
BoiseBlade (Jeff-D) said
Was able to do some more work this past weekend.
Decals and flat coats.
No it is time to do the details and exhaust.

REPLY & QUOTE
BoiseBlade (Jeff-D) said
I was able to paint this past weekend and here is the Camo scheme. Now to gloss coat for decals.

REPLY & QUOTE
phantom_phanatic309 (Stephen Willdig) said
Thanks. I'll give the meths a go on some scrap. Got plenty of cut offs left.

REPLY & QUOTE
JClapp (Jonathan) said
I think by methylated spirit is meant Isopropyl alcohol, that's what I use to clean marker ink and paint as well, off plastic.
White spririt I think is mostly naphtha, I would not trust that on styrene.

REPLY & QUOTE
phantom_phanatic309 (Stephen Willdig) said
Almost forgot, what would be a good solvent to use to clean off the marker pen? I was thinking of using either white spirit, methylated spirit or tamiya acrylic thinner. Will any of those shift it without attacking the plastic?

Here's my update so far.

Most of the parts are now cut and sanded off the backing sheet, just the upper wing to do and of course the cut-outs in the fuselage. It turned out surprisingly well and I made no cock ups and it now looks like a conventional plastic kit. A quick test fit has shown that the fuselage halves match up perfectly. I just worked carefully and slowly with my headphones on. I think I got through most of my Pink Floyd and Marillion albums working on it

I'm beginning to think I can tackle now.

REPLY & QUOTE
Bigrip74 (Bob R.) said
Jonathan, you Jessie, Jeff-D, and Jeff have really done fantastic work on your builds while mine languishes due to work and an ongoing search for an acceptable abrasive which I finally gave up and am using what I have on hand and have just finished on wing. I may not finish but will give it a try.

REPLY & QUOTE
JClapp (Jonathan) said
I got started on this little kit today, separating the parts, and filing away the casting gates.
The dry fit looks excellent.

REPLY & QUOTE
BoiseBlade (Jeff-D) said
I am hoping to be back at this weekend.
May was not a good Month.......

I actually did paint my Breda once already, but had to strip it down again because I did not like it and the paint was a problem. I did re-primer it again a paint the Undersurfaces. It is masked off and I should start Camo again this weekend.
Fingers crossed......

REPLY & QUOTE
phantom_phanatic309 (Stephen Willdig) said
I've started cutting plastic earlier this evening. Sanded down and cleaned up the interior cockpit parts. I'm going to wait till I've everything cleaned up before taking any photos.

This campaign has been very quiet recently, will be good to see another project get underway.

REPLY & QUOTE
phantom_phanatic309 (Stephen Willdig) said
Here's my build.
The Joystick Models 1/72 Albatros J.1.
The J.1 was an armoured battlefield support aircraft introduced in late 1917. The cockpit section of the aircraft was covered in 5mm steel plate to protect the crew from ground fire. Only the rear gunner was armed with a Parabellum machine gun and grenades. A handful of aircraft had the machine gun replaced with a 20mm Becker cannon and were among first tank-busters. Although successful, the lack of armour plating around the engine and radiator left these areas vulnerable. Albatros later redesigned it as the J.II with more armour plating and even fitted 2 downward firing MG08's for strafing missions, while a few had a belly mounted 20mm cannon on a flexi mount.
So, an interesting type that the mainstream manufacturers have not touched. So far anyway. I can certainly see Wingnut Wings doing one if they continue their trend of kitting the more unusual types.

So onto the plastic.

And that's it for the instructions. 2 small sized plans and a written instructions. The decals are quite nice though and give the option wartime German or post-war Polish air forces.

My main reference is Jack Herris' German Armoured Warplanes of WW1, which contains sets of 1/48 plans for the J.1 and some very useful reference photo's. I was able to scan, reduce and print a set to 1/72.

Now, the struts seemed like they could be a problem, but using my new set of plans I compared them against the spare struts in a couple of Roden Albatros kits in my stash. To my amazement the V-struts and longer wing struts, intended for the D.1 boxing, are exactly the right size! Problem solved.

First step tonight has been to mark out the parts. I'll start cutting tomorrow. 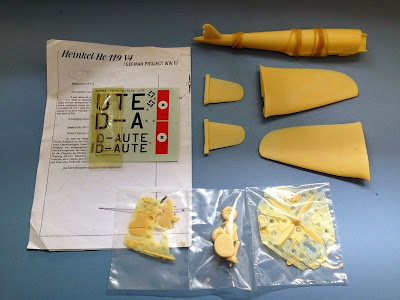 REPLY & QUOTE
phantom_phanatic309 (Stephen Willdig) said
Fantastic build Jonathan. It's a very smart looking aeroplane. And I like your airport terminal too. If space was no problem I'd love to do something like that to display my builds.

I'm hoping to make a start on my build in the next week or so, although I am now leaning towards the Albatros J1. I seem to have caught the bug for WW1 recently

. I think I like the challenge. I might still make a start on the Skywarrior if that one goes well.