Air Campaigns
Want to start or join a group build? This is where to start.
Hosted by Frederick Boucher, Michael Satin
OFFICIAL: Overshadowed Fighters of WWII

REPLY & QUOTE
North4003 said
I was finally able to download my photo of the Italeri Re2000.

REPLY & QUOTE
Bushioka (Martyn Hill) said
Only just got the paints for my He-280, so I should start on it sooner rather than later. One other question: I have in-progress pics of the Ki-61 I started recently (last Thursday to be precise), but would it be acceptable for the campaign with a 'What if?' paint scheme?

"I shall either find a way or I shall make one." - supposedly, Hannibal Barca

Provided the paint scheme is not too outlandish. Try to make it at least credible, that is, using a known camouflage scheme and with common markings. Or, maybe as a captured aircraft - try an internet search for captured Ki-61's, there are a few.


Remember to write up a history of the type's design, production and service. Needn't be very long, but in the interest of establishing a context, and to inform others, such as myself, of its place in history, and why it was overshadowed.

PS - the aircraft in my signature area is a Ki-61, see below.

REPLY & QUOTE
Bink123 (Richard Bethell) said
Have you decided yet what markings you are going to use?

I think that the upper surface camo was called 'counter shading'

REPLY & QUOTE
Bink123 (Richard Bethell) said
Those who may be building biplanes for this GB, here is a link to a valuable site - Håkans aviation page

(Biplanes Aces and Biplanes of WW2)

REPLY & QUOTE
Cannon99 (Karl Messer) said
I'm going to build the I-16 for this campaign.

The Polikarpov I-16 was a Soviet fighter aircraft of revolutionary design; it was the world's first low-wing cantilever monoplane fighter with retractable landing gear to have attained operational status and as such "introduced a new vogue in fighter design."[1] The I-16 was introduced in the mid-1930s and formed the backbone of the Soviet Air Force at the beginning of World War II. The diminutive fighter, nicknamed "Ishak" ("Donkey") by Soviet pilots, prominently featured in the Second Sino-Japanese War,[2] the Battle of Khalkhin Gol[2] and the Spanish Civil War[3][4]where it was called the Rata ("Rat") by the Nationalists or Mosca ("Fly") by the Republicans. The Finnish nickname for I-16 was Siipiorava ("Flying Squirrel").

The I-16 deserves more credit than simply being thought of as the target destroyed by the surprise German attack at the beginning of Barbarossa. It could fight the early Bf109 versions on equal terms and was a powerhouse against the Italian and German biplanes in the Spanish Civil War until the Bf109 arrived. At the outbreak of WWII the design had exhausted its performance potential and it was rapidly becoming completely obsolete. However for a time in the 1930's it was cutting edge.

I want to celebrate the use of the aircraft by foreign customers so I'm going to build the Eduard Weekend Edition kit #8469 which is an I-16 Type 10 in Nationalist Chinese service. 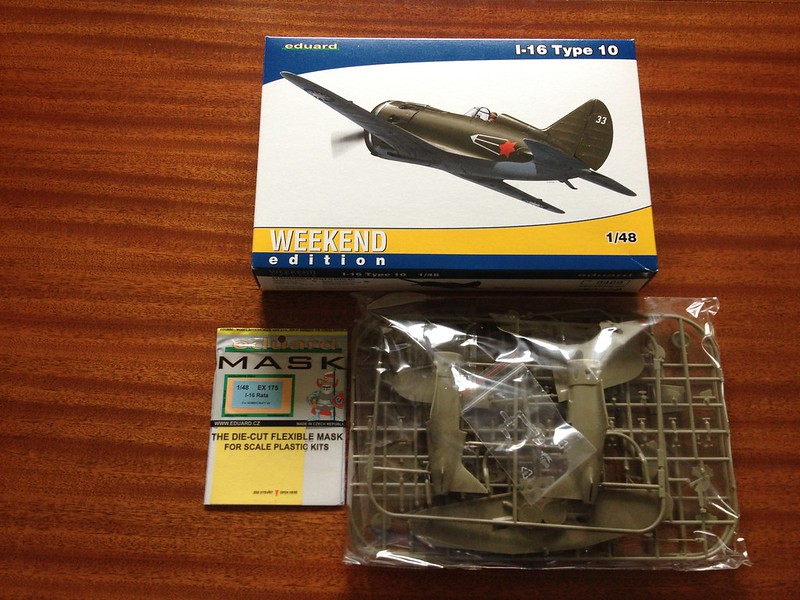 I think that the upper surface camo was called 'counter shading'

My build will be the third print down.

REPLY & QUOTE
BoiseBlade (Jeff-D) said
Ok, I started my build on the Tauro MC205V. Here is a brief write up on it.
Macchi C205V Veltro (Greyhound)
The Veltro built by the Aeronautica Macchi is considered one of the best Italian fighters of World War II. The Macchi C205V was designed to rectify a number of shortcomings which plagued its predecessor (poor engine and junk Breda guns). Sharing 80% commonality with the MC202, the C205 was re-designed with a German Daimler-Benz DB605 RC58 engine and mounted two 20 mm cannon in the wings to offset the 12.7 mm Bredas. The aircraft had a top speed of more than 400 mph and was highly respected by Allied and Luftwaffe pilots alike. It was said that in the hands of a good pilot, it could defeat any allied plane. However, while the C.205 was able to match the best Allied opponents in speed and maneuverability, it was introduced to late in the conflict to do any good for the Axis powers in the war. The Veltro competing for the same contract with the Fiat G. 55 Centauro and the Reggiane Re 2005 Sagittario. The Veltro was faster at medium and low altitude than its competitors. And, it was also sturdier than its competitors. It was also equally maneuverable even though it carried heavier armament.
The Mc.205 reached the airfields in March 1943, with the first planes assigned to the 1st Stormo of the Regia Aeronautica at Sicily and Pantelleria. By April 19, they had claimed 18 Allied aircraft destroyed.
Italy's highest scoring ace, Adriano Visconti, achieved 11 of his 26 credited victories in the few weeks he was able to fly the Veltro, with the top scoring 205 Sergente Maggiore pilota Luigi Gorrini shooting down 14 enemy aircraft plus six damaged with his C.205. The record for this Macchi shows that the C205V had destroyed 115 Allied aircraft, with a further 45 probables to the loss of 55 C205Vs and 49 pilots killed.


Now for the Model........
Why, why, why, did I not choose the Hasegawa MC202 I have in my closet I do not know. Lets just say that this is NOT a Tama-Gawa Build!
I though that since this kit had the engine and guns it would be a good build and it still may, but I think the Italian company that made this kit over engineered it almost to its own demise. Many parts not location points and very soft detail.
With that said, I think it will be a good challenge and a nice starting point if I can make it look like my idea of it. javascript:PasteSmiley(':)')
Here are the 1st few images:
I decide to remove all the soft detail on the engine and rebuild it with sprue, wire and plastic.
I also added detail to the interior of the cockpit.

REPLY & QUOTE
BoiseBlade (Jeff-D) said
Oh Yea,
Here is the Ambrosini SAI-207 tha I am building along with the Macchi. It is a full resin kit.

I cut out the plate with the pilots head on it and put in a little cockpit detail, including a seat made from plastic card.

I have also sectioned up the canopy along the lines moulded to represent the metal framing, so that I could do this -

So, yeah, I'm making progress on my build, even if I have made some serious mistakes along the way. I guess this is just going to be a slightly messed up Sea Gladiator. Oh well, life goes on!

REPLY & QUOTE
c4willy (Chris Wilson) said
Okay I thought it was about time I waded in to this campaign and I thought I'd go with Eduard's P39-Q in the service of the Italian Co-belligerent Air Force.

Interestingly the co-belligerent Air Force didn't fight over Italian soil as the Allied high command thought there'd be conflicting emotions if they were asked to shoot down their countrymen. (Somebody was obviously thinking!)

I've chosen Eduards Profipak boxing of their kit as I've not built one before and I have several to build at some point.

REPLY & QUOTE
JScicluna (James) said
Hi all. This will be my build. 1/72 Hobby Boss D.520 and it was in my opinion overshadowed due to being a French fighter!

I intend on completing it in the same colour scheme that Pricklehead has chosen and hopefully will do it the same justice he has.

Simon - This is one of three Malta Gladiators I did for the Fleet Air Arm Campaign. They are a very beautiful plane and good luck with the rigging. Hope you dont mind me posting it here.

REPLY & QUOTE
scribbles101 (Simon.L) said
No worries at all James, I'm really very grateful that you have posted the picture because I can (if you don't mind) use it as a reference for the paint scheme, so far I have found all sorts of pictures of the same gladiator through google searches and there are many conflicting images of the paint scheme, I was having trouble trying to work out which was accurate! So thanks, that will be a great help

REPLY & QUOTE
c4willy (Chris Wilson) said
I have a confession to make, Eduard Profipak kits have always intimidated me a little, all that photo etch and the parts count, however after working on the P-39 I find myself surprisingly happy with the build thus far. I had to make choices after losing some of the tiny photo etch to the great concrete monster, but I found I was okay with picking and choosing (or having it chosen for me by my own ham fistedness) what detail to add. So I've got the bird pretty much together and I find that the masks provided in the kit a godsend making the tedious job of masking dead easy! I think I'll have to build more of these kits, I have a few in the stash so I guess it's time I got down to it! Anyway here are some pics to show you where I'm at.

I tooohave problems with PE, but for me it's hamfistedness and lack pf patience. I just finished an Eduard Profipack kit and only usd about a quater of the PE - some of the parts were so small I couldn't pick them up. From now on it's weekend kits.

REPLY & QUOTE
c4willy (Chris Wilson) said
I hear what you're saying Richard, I think it's a matter of picking just what to add and what to leave out for your sanity! LOL

REPLY & QUOTE
Bushioka (Martyn Hill) said
Picked my birds finally after far too much deliberation. I'm attempting two for the campaign because both are fairly simple kits. The winners are a Smer 1/48 Reggiane Re. 2000 Falco and a 1/72 KP Models Avia B.351. A couple of Czech manufactured kits no less.

"I shall either find a way or I shall make one." - supposedly, Hannibal Barca

So, yeah, I'm making progress on my build, even if I have made some serious mistakes along the way. I guess this is just going to be a slightly messed up Sea Gladiator. Oh well, life goes on!

Wow that is one thick assed canopy.

I've been known to build a few things

REPLY & QUOTE
Bink123 (Richard Bethell) said
I am looking forward to seeing your Avia B.351 build. I am working on its predecessor, the Avia B. 534, a biplane.

The B, 351 was a prototype with fixed undercarriage, and elliptical wings. It had a top speed of 308 mph.