Although conventional wisdom might suggest that the Whippet is being driven off the barge, the first time I saw this image I instinctively thought it was being loaded, due to where the gaze of the crew was so intently focused. Given that over 90% of the tanks weight is not on the barge, I dont understand why they would all be looking there if it was exiting. The only possible reason I can think of is that even though almost all of the weight is off, the barge would bounce up once the track finally cleared. However, I see no evidence of anyone preparing to brace themselves.

The current seems to be right to left, but no signs of it being very strong near the bank. I read the guy on the pole as keeping the barge flush with the dock, vs. struggling to keep the boat in place; there could be another pole just to the left of his, with the holder hidden behind the other two figures.

We have no idea of the situation across the river. There could be some reason the tank needs to exit in the same direction, which means a mid-river turnaround. What I dont know is if it is necessarily much harder to back up than go forward. Although there were two engines, when going straight they were locked at the cross-shafts; clutches released this when steering was required.

Again, my read of the tanks travel direction is based solely on my gut reaction to what I see in the photo, specifically where everyone is looking. I have just realized something else. Even though having to twist around, going backwards with the door open would likely give the driver a better low-angle view of where hes going, then using the front vision slit  which in fact, seems to have something partially draped over it. Its being steered over what look to be a couple of 1 sq. beams, and with the vision slit location (near side, just below the stowage), I doubt he could see them much closer than 10 away.


On the assumption that many of those reading this are interested in Whippets, I have several other questions.

Theres a square-shaped plate between the cab and open door that is clearly a Japanese mod  any guesses as to the function?

I had read that the angle irons affixed to front and rear were for supporting a track cleaner, designed to dislodge mud, etc. Asking elsewhere as to the material of this, I received this response, It is just a cover for the tracks so that when the tank is moving, light glinting off the tracks doesn't attract the attention of enemy reconnaissance planes.

I had never seen this suggested before, and was more than a bit dubious, largely due to the relative newness at the time of both tanks and planes, but also expecting that the cover would extend several inches beyond the outside edge of the track if this was indeed the intent; however, it does not even fully cover the track.

While writing this I decided to try some more net research, and in the process have discovered what I think might be considered the mother lode of Whippet documentation, essentially a walk-around with annotated photos from multiple survivors.

This note is at the front of the i-book:
"This document may be freely distributed, on the following conditions:
that no changes or modifications are made to the document in any way;
and that no profit is made off the distribution.


Finally, is anyone aware of a forum similar to Armorama in Japan where I might be able to find more info?

REPLY & QUOTE
barkingdigger (Tom Cromwell ) said
Interesting pic! Seeing as it is still in British markings (including the recognition stripes at the nose) I wonder if it is in Japanese service, or just "passing through" as part of the ineffectual British intervention into the Russian revolution as the war in Europe ended?

The track covers were some kind of "belt" affair, held in place by three hooks at each end that engaged holes in those angle irons. I thought they were to reduce the flying mud rather than any attempt at camoflage, although by the time the Whippet entered service both sides had already endured three full years of serious "learning", so spotting and camo techniques had already reached a level that wouldn't change significantly until the advent of radar and infrared in WWII. But mostly the tracks would be a muddy streak, so I doubt the covers were driven by a need to reduce glare...

As for direction of travel, either way is possible! I doubt the open door would help the driver much (other than ventilation) since he'd have to twist around, making it harder to be subtle with the steering. However, he could easily have had a buddy standing in the doorway shouting directions, so he didn't necessarily need to see for himself.

REPLY & QUOTE
velotrain (Charles Hansen) said
Thanks Tom. 4-6 Whippets went to Japan in 1919, depending on what source you believe. There is at least one other well-known photo of them, showing that they hinged the driver's plate (ventilation again), and added additional (human) protection around the exhaust.

There are very few images of the Whippets with the belts attached, so it seems that crews quickly removed them if already fitted, or didn't bother putting them on if this was a field install. I just noticed these were on an early prototype, so Im guessing someone thought they were a good idea and the mounts were kept in the design, but no-one ever checked with the users of the product.

The rear supports were apparently later incorporated in a tray for a stowage box on each side  these show up in photos more often than installed belts. In this image, one of the stowage boxes has been recently damaged/removed, as the tray and support rod are still there; the far stowage box is in place, and apparently being used for a nap.

A female Mk. IV also went to Japan in 1918, and there is a poor quality image (probably from a newspaper) on the net of it being hoisted off the ship that brought it there.

At this date, I doubt any additional info will be forthcoming ;-) I just cant look at the photo and imagine that the tank is not being loaded onto the barge. Im certain that both engines were locked before this operation started, so no steering would be needed  or possible without engaging the clutches. Even if the driver cant see the beams himself, the rest of the crew can and they have easy communication with the barge crew. In this scenario, theres no benefit to driving forward.

I'm guessing that isn't the image you intended Frenchy ;-)

Here's where I had found it http://club.chinaiiss.com/html/20137/26/pb4cf.html#p=14 but the full size picture is no more available

So I've managed to find it somewhere else :

...But I'm not sure this will help with your question 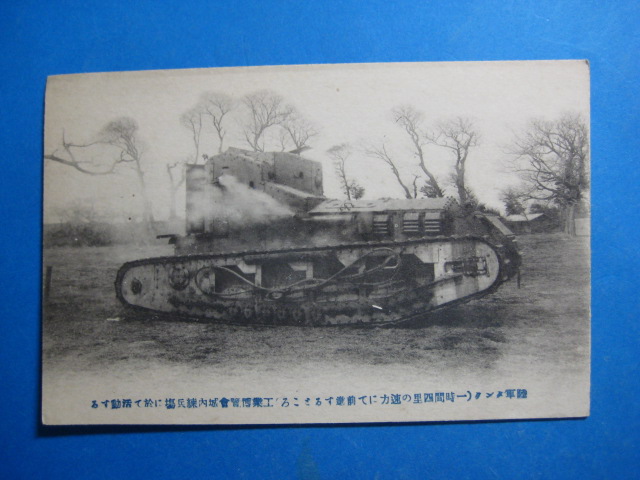 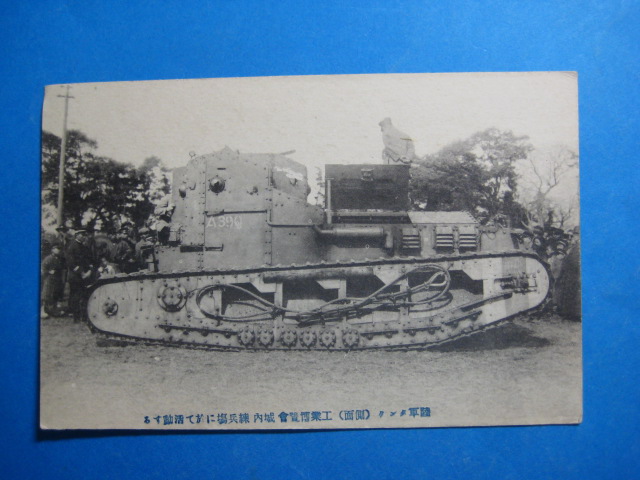 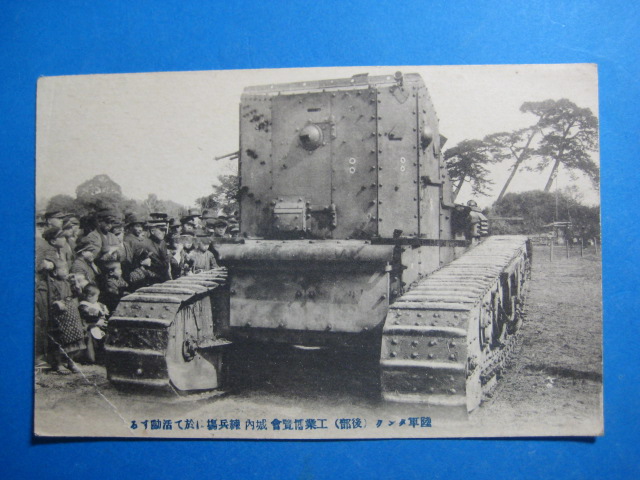 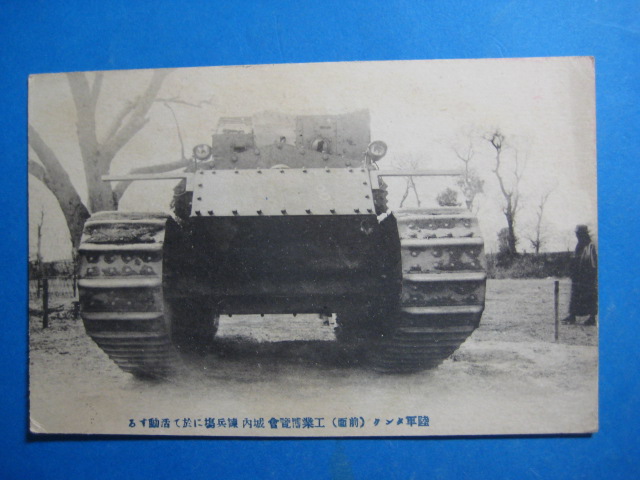 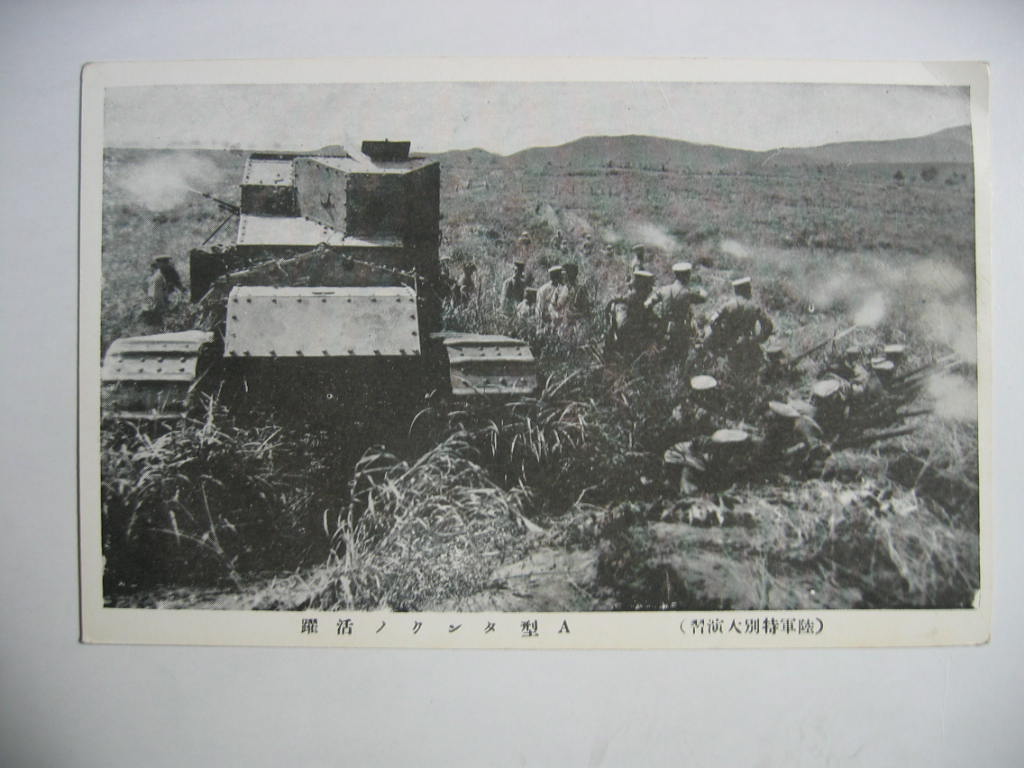 ...But I'm not sure this will help with your question


Well - it certainly answers the question of whether the barge had just arrived or was about to leave !!! It has me thinking that the whole operation was carried out with poles - no lashed-on motorboat. This also tells us that it wasn't the rainy season!

Henri-Pierre, you're a genius! I don't know how you come up with all this stuff, and I'm sure it's a combination of experience, intuition, and persistence. We should have a thread called "Stump Frenchy", where everyone challenges you to come up with photos of the most esoteric and probably undocumented events - such as the field trials of DaVinci's proposed tank ;-)

Again, thank you so much. I felt certain that the tank was being loaded, even though that meant it was being driven backwards.

To think I replied to Tom, "I doubt any additional info will be forthcoming". Who knew?

REPLY & QUOTE
Robbd01 (Robbie) said
If that 'Stump Frenchy' thread ever gets started, I have 2 questions locked and loaded

Charles, here's the forum where I've found the second picture showing the Whippet on the barge :

There are a few more interesting pics there (including Mark IV pics)...

PS : the full size picture is apparently available again on the Chinese website... quite strange