You are viewing the archived version of the site. Go to aeroscale.net for the current dynamic site!
main (Shipwrights) General Ship Modeling

MSW Crew member Alec Cap [bigal07] shares his dockyard diorama with us in this unique feature.

REPLY & QUOTE
DieselDog (Chuck Bauer) said
Alec, this is really something to be proud of. A little bit of everything. Hustle, bustle, tanks, landing craft (being staged for June 6?). Very realistic weathered roofs. Details like the building with the painted over blackout windows but a couple are left open.
If only they made 1/700 scale electric trains.

Alec had used this for displaying several different ships he had submitted. So, I aked him about it. He was nice and sent me a few pictures and the write up.

REPLY & QUOTE
bigal07 (Alec Cap) said
Thank you for the comments - at the moment I was all fingers crossed that I'd be able to sell this whole dio to fund the next one, ran it for 5 days on ebay got several watches but no buyers, I was asking £50.00 per segment. Still, never mind.
At the moment I've got a few model builds on the go, and can't quite get going on this new project, I hope to improve on the buildings and surrounding sections, a slightly larger sea effect and maybe a train or two. Again this will be along the same lines as segmented system mentioned, same diorama housing different types of ship with a new twist in using different backdrops that I briefly wrote in the write-up. And if the very worse comes to the worse, then I can always brake these 2 up and use those buildings again, which for some have already been round twice, so I'm getting some good use from them.

REPLY & QUOTE
loucar (louis carabott) said
WEll done alec ....some work there ...how long did it take you to finish all this ?
some job.....
my compliments sir
Louis

REPLY & QUOTE
bigal07 (Alec Cap) said
louis - over on modelwarship.com, there is a step by step of my build, don't ask where, but its there somewhere. There is also a smaller, very much the same method here also, again, step by step.
Where we live is very small, and space for such hobbies as building and displaying scale models is a no no simply haven't got the room for it, and many of the reasons I model in 1-700.
Stuck between a rock and a diorama you could say, I set out to design what I call a segment, later, segmented diorama. While you'll often build a model and place this within a diorama, the footprint of such a model takes up rather a lot of space, whereas a single stand by itself ship takes very little room by itself. So the solution was easy, design a diorama that will fit onto a shelf within a cabinet, then design another that would take up another shelf, each one a complete diorama within itself, I designed mine some 30'' by 4''.
Simply add or take away a segment governs the size of the diorama, either way the whole thing will fit back inside the cabinet.
Now instead of having single dioramas for each ship model, I have a constant and permanent base for any 1-700 ship, and of course I also designed this for a battleship, heavy cruiser and so on, not just WW2 shipping, but acrosss the time zone. And the buildings and pieces in general can be moved about, or stay where they are.
This is my designed segmented diorama consisting of only 3 pieces, of course you can have as many as you wish so long as the back, or front, or side will marry up with one piece to continue the skyline.
The dockyard is what I call ''simple'' or ''two step'' its a simple design because this actually has only 2 levels, the lower being the sea, the higher regardless of what's on it, the land. Once established as shape and what you feel also could look good, I simply stuck down the land and pained the whole thing stone grey.
I built more buildings then I'd knowingly require (allowing for braking) painted and weathered applied decal to many, and that was that, bushes, fences, brick wall and rubble and the general rubbish you see laying around all comes from the 1-35/HO railway scale, the whole build just over 3 weeks to complete, this for all 3 dioramas. For those following the step by step build, they also should have been able to complete within the same time frame as I was giving them what they will require next, so they always had something to do and should also know what they'll need for the next part.
As I said, I've to sell this lot on ebay, no one was intrested, maybe £100.00 for all 3 dioramas is to high, considering the amount of finished buildinds, many of which are etch, and resin, hand painted, then many many other pieces, I believe even if someone stripped off all this, you'd have more then enough to build another diorama. Which I am now looking into.

I have the same problem as well I am really running out of space....position critical:)...that idiea of yours is brilliant...but I cannot to thaT ..you have to see the size of my workshop

:( I get so clostrophobic in there but once I start modelling I'm ok...as a matter of fact I donated all my 1/72 scale aircraft dioramas to the Malta Aviation museum and already gave the Hood away to the Maritime museum for free !!!!
I don't sell my models Alec I think it takes the pleasure out of the hobby...could never do that....
tons of work on the dio...liked it a lot....massive work...currently working on the airwing of USS Wasp LHD 1 from Revell in 1/350 scale...that's gonna be a challenge as well..I f I may say one thing I have been following your contributions to all ship modelling websites for a while and you are really getting better and better mate.....keep the pace buddy:)
This dio is a show piece.... .
Keep on modelling my friend...ps I do love your forum contributions

:) straight to the point and no messing about.... wicked

:)
Best regards from little Malta Alec to you and your family
Louis

thanks Jim.
We'll also have some larger cranes, floating cranes, rail station items and tugs up for release within a month time. Took a while to test and adjust them, but that's pretty much handled now.


Haven't seen the larger cranes, unless you mean those etch hammerhead one's, I've seen these for sale on ebay but believe way to much money. Would like to see photo's if possible of this ''new'' set.

REPLY & QUOTE
bigal07 (Alec Cap) said
While the essence of our dockyard will be forever unchanged, ships come and go, and the acquisition of land against that of the sea can also change by simply adding another segment, or as we've established, take lightly held building and swap for others, we can of course change time as well, stuck in the 1800/1900's simply reduce the amount of old stuff, or add even older types of buildings. 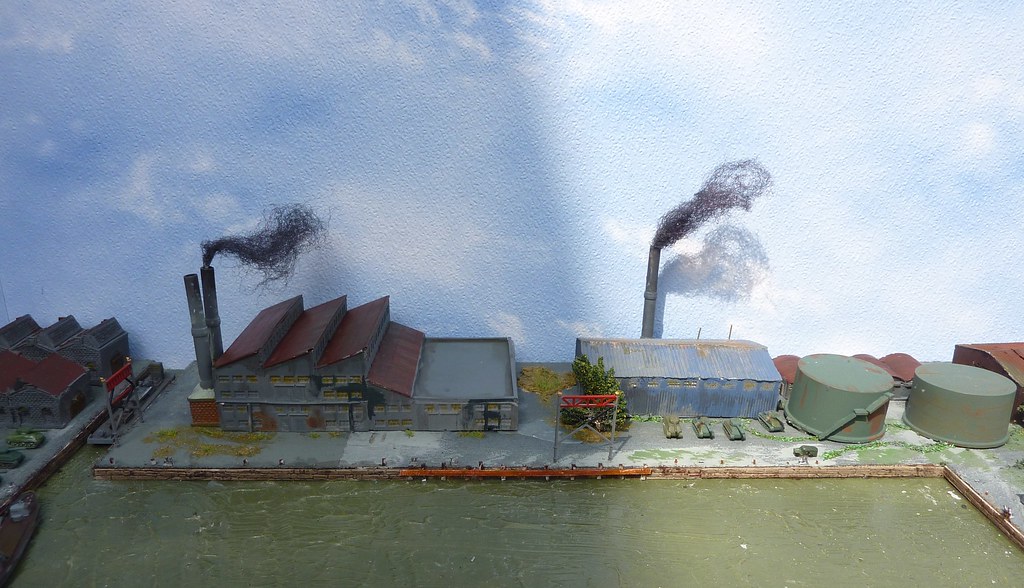 Seg 1 027 by warship, on Flickr
In due course time, my intention is to write Jim Adams and see we I can upgrade this post, at the moment though, things for myself are somewhat tried and tested, so time sadly will be the name of the game.

Seg 1 015 by warship, on Flickr
For the 300 years an old castle sat upon that distant hill, as the land slowly became heavily industrialized. so the land began to move, an Achilles heel some said, even more so when plans were drawn up for an LCAC base to be established just on the other side of the castle. 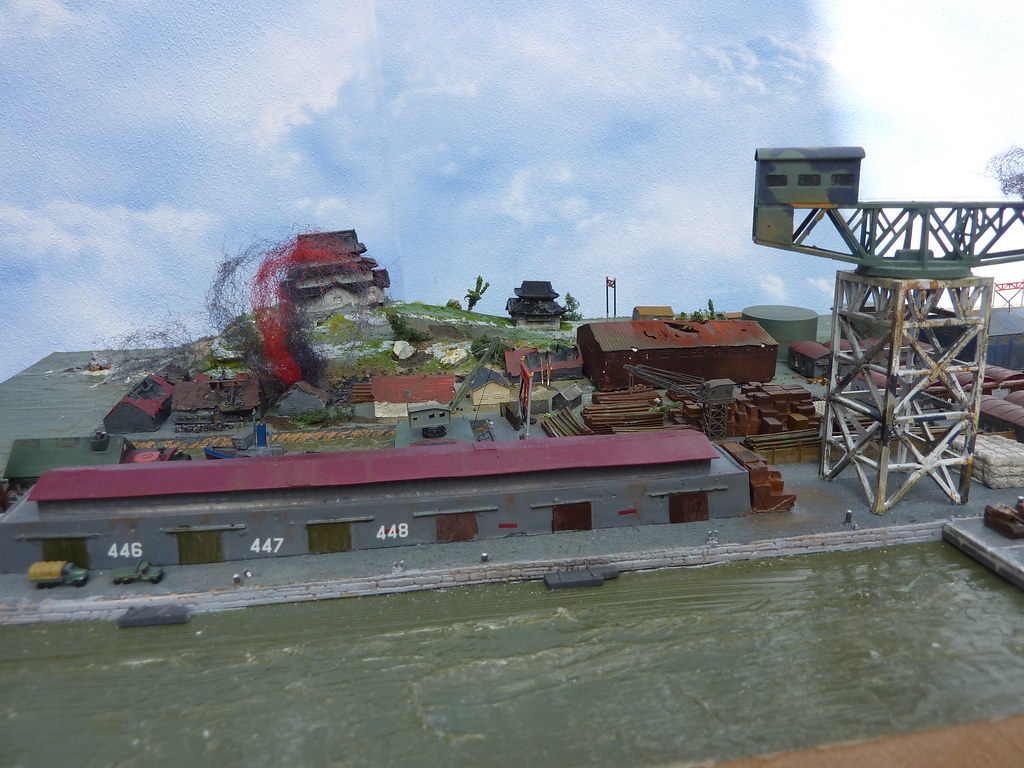 Seg 1 033 by warship, on Flickr
With the South China Sea becoming more then hot, the JMSDF had every intention of making this island a base of operations. 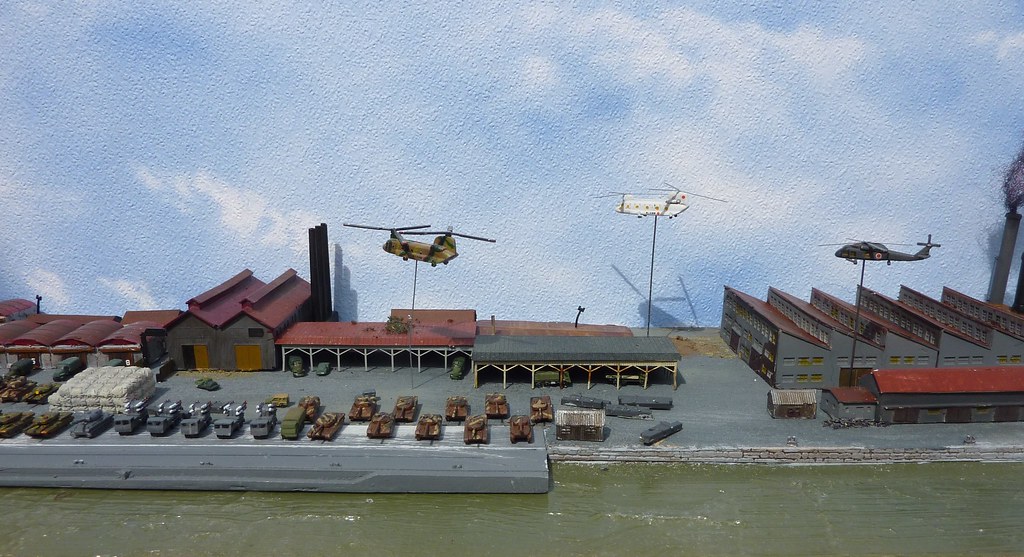 Seg 1 009 by warship, on Flickr
With this segmented diorama, I have used a total of 3 (three) segments, and as we've said many times, we can use as many as we wish, and while the land is the same, the dockyard can change, we can even add a little story, and perhaps develop that story as the diorama grows, or not as we choose to do, I would like someone else to attempt to build such a dio, these are not hard, I believe they are in fact great fun and offer some change from the normal ship building.

REPLY & QUOTE
bigal07 (Alec Cap) said
With fingers crossed, I have sent Jim Adams an up-date of a further 20 pix also showing the diorama having a slight change of buildings, and a new segment of a LCAC base.
I know Jim is very busy, and something that appears a simple request can no doubt take quite some time, I only wish I could help out, but as my computer skills are to be blunt, rubbish, I can only stop send in more and more photo's.
A change made to section 1 and 2 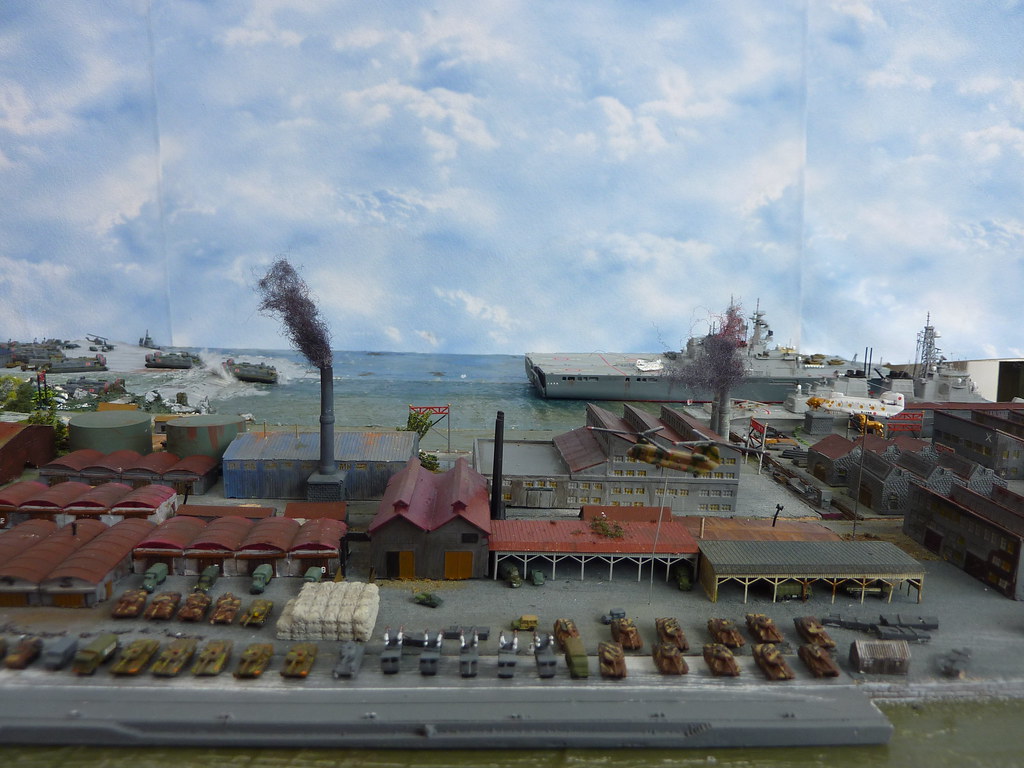 LCAC seg 1 080 by warship, on Flickr
And the new LCAC section that can also replace segment 2 or place as a complete new segment. 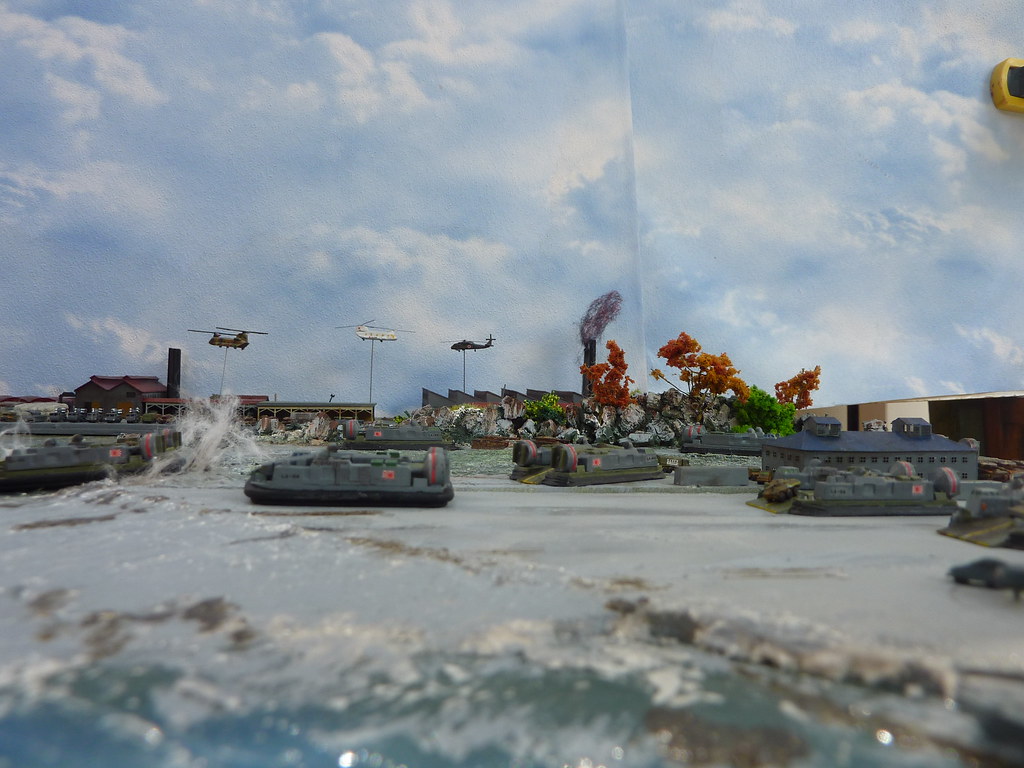