REPLY & QUOTE
Harry_Bosch (Harry_Bosch) said
I have to go along with the rest of the gang on this. I paint on the sprue and then glue on after all major painting is finished. 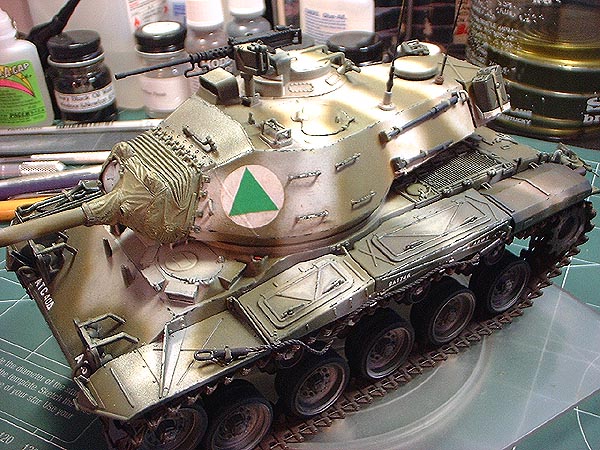 I'm like most everyone else too - I paint and add them separately. However, I don't add them all at once. I add some equipment at different stages of finishing and weathering to vary the tones on the model. Not all of the original equipment issued to a vehicle when first assigned with a unit is likely to stay with that vehicle throughout its service life. You can add a little visual variety by finishing the equipment in different tones to mimic this.

REPLY & QUOTE
ahueger (Andreas Hueger) said
I used to paint those parts first. However, on comparing with actual vehicles I have changed my mind. Most times tools are originally painted whilst on the vehicle. Only those frequently used will loose color and this can be shown by painting after assembly ... just my two cents

REPLY & QUOTE
Plasticbattle (Frank Glackin) said
99% of the time I glue all tools on the tank/vehicle and paint after the tank is finished ...... and then weather them all together. I have about 1000 old business cards that have old telephone numbers, old address etc and slide these in under to speed up the work. With a 5 x 0 brush its not that hard to paint afterwards.
Stowage and personal items ...... I keep seperate. Also I keep all wheels and track seperate until final weathering.

REPLY & QUOTE
There is only two kinds of fires. Those that use less than 500 gallons of water too extinguish and those that use WAY MORE!

REPLY & QUOTE
mj (Mike Nachman) said
I have used both methods, but since I found MicroBrushes, I'm much more inclined to build everything, then paint. The MicroBrushes allow you to get in those tight places for tools.

Just a note: I was watching a program on the History Channel on WWII armor, and paying attention to the footage. I was surprised how many shots there were of US Armor with the tools painted over in the camo pattern. I still like to go over them with the MicroBrushes to give them that pure wood look, but this was an eye-opening for me.

REPLY & QUOTE
scoccia (Fabio d'Inzeo) said
It depends on what kind of accessories. For the one coming with the tank I usually paint them when they are already installed, because often will be quite tough to insert them in the metal holders I scratchbuild on the tank. For the extra gear like cammo nets, personal belongings and so on I prefer to shape them and dry fit them om the vehichle, then i paint them separately...
Ciao

REPLY & QUOTE
Oberst (Andrew Ottaway) said
I keep alot of things seperate such as the tracks and tools. I use toothpicks for the wood handles, washed with oils to darken then. THey look much more realistic because of the real wood grain. It is much harder to really do a nice job on the tools if they are already fixed to the kit. Mind you, mine are removeable anyways with all of the Aber latches and the like (++)

REPLY & QUOTE
avukich (Adam Vukich) said
I always assemble the entire kit and then paint. Tracks are the only thing that I sometimes paint seperately.

REPLY & QUOTE
slodder (Scott Lodder) said
I do a bit of both. It really depends on the tool and the flow of building and painting.
There are times when I attach them when I am on a roll. Sometimes its a concious decision because of how they are situated it turns out easier to glue then paint. Other tool are easier separately. The wooden handled ones are more prone to being done separately.

REPLY & QUOTE
sgirty (larry bernard) said
I've tried this both ways and for me, personally, I find that for the most part, I do better if I put the tools on first, paint the the vehicle it base color, then paint the tools (if they are easy to reach, that is). There are some tools on some vehicles that are either too big (jacks, etc) or may be put in places that would be difficult to get to with a brush afterwards, so in my opinion, they should be painted first, then put on after the vehicle is painted.

Try it both ways and choose the one, or both, that works best for you.

REPLY & QUOTE
SGT_Fubar (Jeff Moore) said
Mostly I paint then attach. However it would depend on the tool and the type of tank. If you are doing a fresh out of the factory then most likely the tools will be new and painted on the tank. Or a desert camo over a green like they did for the Gulf Wars I & II

REPLY & QUOTE
"I want you to remember that no bastard ever won a war by dying for his country. He won it by making the other poor dumb bastard die for his country..."General George S. Patton-June 1944

I assemble and paint my vehicle with the tools off. I then paint the tools and glue them on.

REPLY & QUOTE
Augie (Doug Archer) said
I usually glue them on and then paint. I find that it save having to make attachment points for them with the camoflage painted on.

REPLY & QUOTE
Army (Armando) said
I paint first them Glue.....Unless its part of the part then carefully paint the part

REPLY & QUOTE
Delbert (Delbert) said
I paint my tools and stuff seperatly but I don't weather the tank or vehicle untill they are in place... that way you don't get a dirty tank with shiny new tools..

REPLY & QUOTE
blaster76 (Steve Joyce) said
I guess I'm like everyone else in my preference. Wooden handles, metal end pieces paint separately. I have seen them painted when on the vehicle and I think they lose something.

REPLY & QUOTE
PLMP110 (Patrick Parton) said
I assemble and paint my vehicle with the tools off. I then paint the tools and glue them on.

REPLY & QUOTE
Tony_Frey (Tony Frey) said
Personally, I like to paint all of those things separately, and then attach them. It may not necessarily be realistic, but it looks better in my opinion. A lot of the armor that I build (1/72 & 1/76) already has them molded on, so it makes it a challenge at times. But, if there was no challenge, it wouldn't be as much fun.

REPLY & QUOTE
All power corrupts, but we need the electricity.

REPLY & QUOTE
Sladog said
What do most of you do regarding this. Do you glue the axes, hammers, shovels, etc on the tank then airbrush the whole thing, leaving those things the color of the tank (as was suggested in a book, that those things were on the tank when they were initally painted) or do you paint them separate and glue them on after you paint the whole tank?

REPLY & QUOTE
"The Sunshine bores the daylights out of me..."