You are viewing the archived version of the site. Go to aeroscale.net for the current dynamic site!
mainArmor/AFVTank Destroyers

Self-employed English teacher living in NW Spain. Been modelling off and on since the sixties. Came back into the hobby around ten years ago. First love is Soviet Armor with German subjects running a close second. Currently exploring ways of getting cloned to allow time for modelling, working and wr...

Copyright ©2021 text by Jim Rae [ JIMBRAE ]. Images also by copyright holder unless otherwise noted. Opinions expressed are those of the author(s) and not necessarily those of AeroScale. All rights reserved.

moose
Hi all, I'm not trying one up Jim's review but as I'm almost done with a full build review I'd just like to clarify a couple of things. The Archer kit doesn't include an engine, just the rear engine bulkhead with twin fans plus the gearbox/transmission assembly with the twin radiators mounted above these with separate access hatches should you wish to expose the inner detail. The tracks are the individual link workable track Bronco previously released seperately as set #AB3536. The road wheels are a different pattern than those on the Miniart Valentine kits. Hope that helps. Cheers Terry A
JAN 02, 2011 - 12:48 PM

jimbrae
My bad, and my apologies. Unfortunately, at the same time as working on this First-Look, I was also doing a similar one for Bronco's New Gaz Truck which DOES include FULL engine. So, for some reason, I decided to give the Archer an engine as well...
JAN 05, 2011 - 05:27 AM

nooplwb
Went to a local shop this afternoon & heard people saying that the model was about 5mm shorter than the actual scale,can anyone confirm this??
JAN 29, 2011 - 07:17 AM

Vartotojas
Could anyone clarify if Friulmodel ATL-113 ARCHER Self-propelled gun tracks are the same as ATL-32 VALENTINE/BISHOP tracks? 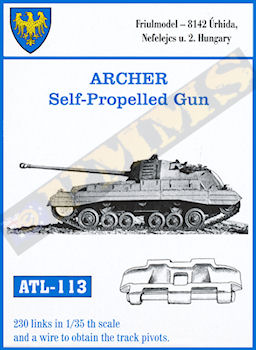 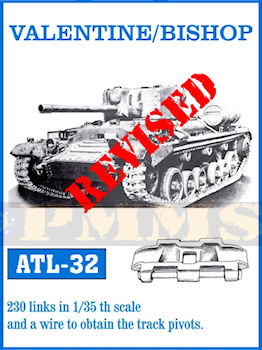 NFBradley
Either one of those track sets will do, there is no difference between the two, I just assembled (25 minutes ago) the kit indie tracks, they went together really well and without any fuss! And because of that I'm 35 Euro richer!
MAY 25, 2011 - 07:13 AM

firstcircle
David, it's not like I'm stalking you or anything, but didn't you contribute to the discussion of this kit with someone who did finish it in 2013? Dmitri Slivkov True that there are a few other starters but not finishers on Armorama, but Dmitri's looked pretty good.
NOV 19, 2017 - 08:23 PM

PvtMutt
Interior is busy but the rest is pretty standard.