Adie Roberts opens the box on the Kitty Hawk AH-6J/MH-6J to see what you actually get and look at a possible build feature with a Black Hawk down.

Nice review, would love to see this built. I am really thinking about this one.

REPLY & QUOTE
mother (Joe Szczygielski) said
I just finished mine a few week ago, it's a great kit and with some detail work it looks great. However it has some small fiddle fails...The kit has many short shot of plastic within the sprue frames.

Step 3: the kit is missing the FLIR ball, so parts C21&20 are not used. But it you can get one or make one then go ahead and add them.

There is no hole for part B32. Also missing are the holes for A9, you will need to drill or sand the legs down as I did.

Adding the PE seat harness, be sure to bend the tail of harness over parts A38,39..not like shown in the instructions.

Rudder pedals have some problems, full short shot on part B49 and most of the parts are missing the connection holes.

Cockpit floor is missing the hole for fire extinguisher, no big problem...just drill one.

If you plan on building the Littlebird with weapons, don't add parts A1,2,3,and 4, they are used for the fast rope bar.

In step 10 check your references for which bird you plan to do. There are many photos on the net. Step 10 is installing the lights and antennae's. Part A35 is not listed on the instruction sheet, however it's shown in place in step 10.

Step 11...mini guns..well they are a pain. My suggestion is to buy aftermarket or used some found in other helicopter kit in plastic. To much to go into...

Adding the skids, make sure you line up the supports and skids so the bird is sitting level.

In step 14, adding the last of the antenna blades, part A57 is to be above after the rear door (both sides)...look at reference photos.

A33 will not fit with part A30, the hit together, after looking over reference I found it's placement.

The PE ammo chutes will bend, but was a real treat to get them installed.

On the tail boom there are four connection point to install tail rudder...well to 2 or the 4 are missing...

In step 17 is a bit of a mess, it can be done with some time and patience. Most of the parts are missing their connection points and have weak detail.

In no way does this discourage me from building more Littlebird kits, I have two more in the works. Just be patience and you'll be satisfied with it.

REPLY & QUOTE
In_War_and_Peace (Adie Roberts) said
Thank you, Kevin, it is a nice looking kit I have to say and thank you, Joe, for bringing this to our attention.

REPLY & QUOTE
AJLaFleche (Al LaFleche) said
Looks intriguing! I couldn't see in the sprue shots...does it have the rotor for the six bladed version?

REPLY & QUOTE
mother (Joe Szczygielski) said
It does not have the set of the six blade bird, however the kit does come with the sixth blade, maybe in a future release.

REPLY & QUOTE
AJLaFleche (Al LaFleche) said
Thanks, Joe. That saved me some money!

And no small amount of frustration.

REPLY & QUOTE
HeavyArty (Gino P. Quintiliani) said
A good review and a good rundown of potential issues by Mother. I too plan to get and build this kit.

A couple points though, Joe says:

It is actually common for AH-6Js to not install the FLIR ball, but have the mount still in place. The ball is removable when not used, but the mount is permanent. All the AH-6Js in OP Gothic Serpent (Somalia '93) had the mounts, but the FLIR balls not mounted.

Also:
"If you plan on building the Littlebird with weapons, don't add parts A1,2,3,and 4, they are used for the fast rope bar."

This is not necessarily true. The aircraft can be reconfigured as either an AH or MH by adding or removing mission equipment (i.e.: weapons plank vs seat plank, FLIR or not, etc., etc...). They can be reconfigured in many ways. As such, most aircraft have the connection points for the fast rope rigs on them. So it is not incorrect to have them on an AH-6J gunship.

...first I will do some research and see if anyone has any 1/35 scale crew, more importantly, some 1/35th special forces in a sitting position that could sit on the out riding planks for interdiction / extraction work.

Kitty Hawk has shown a future set of figures for the Littlebird. They are suposed to be from 3D renderings and look awesome. Hopefully we will see them soon. 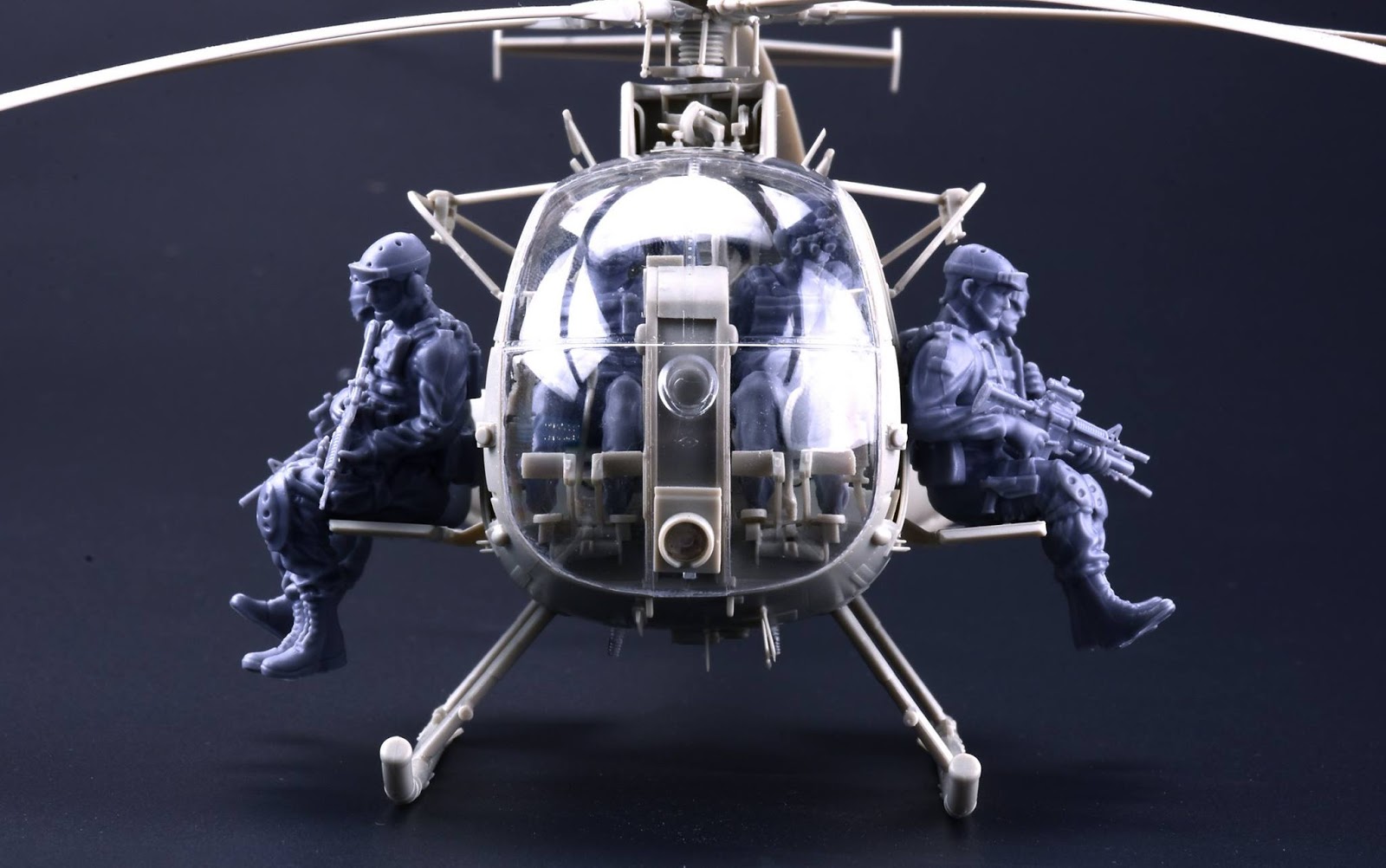 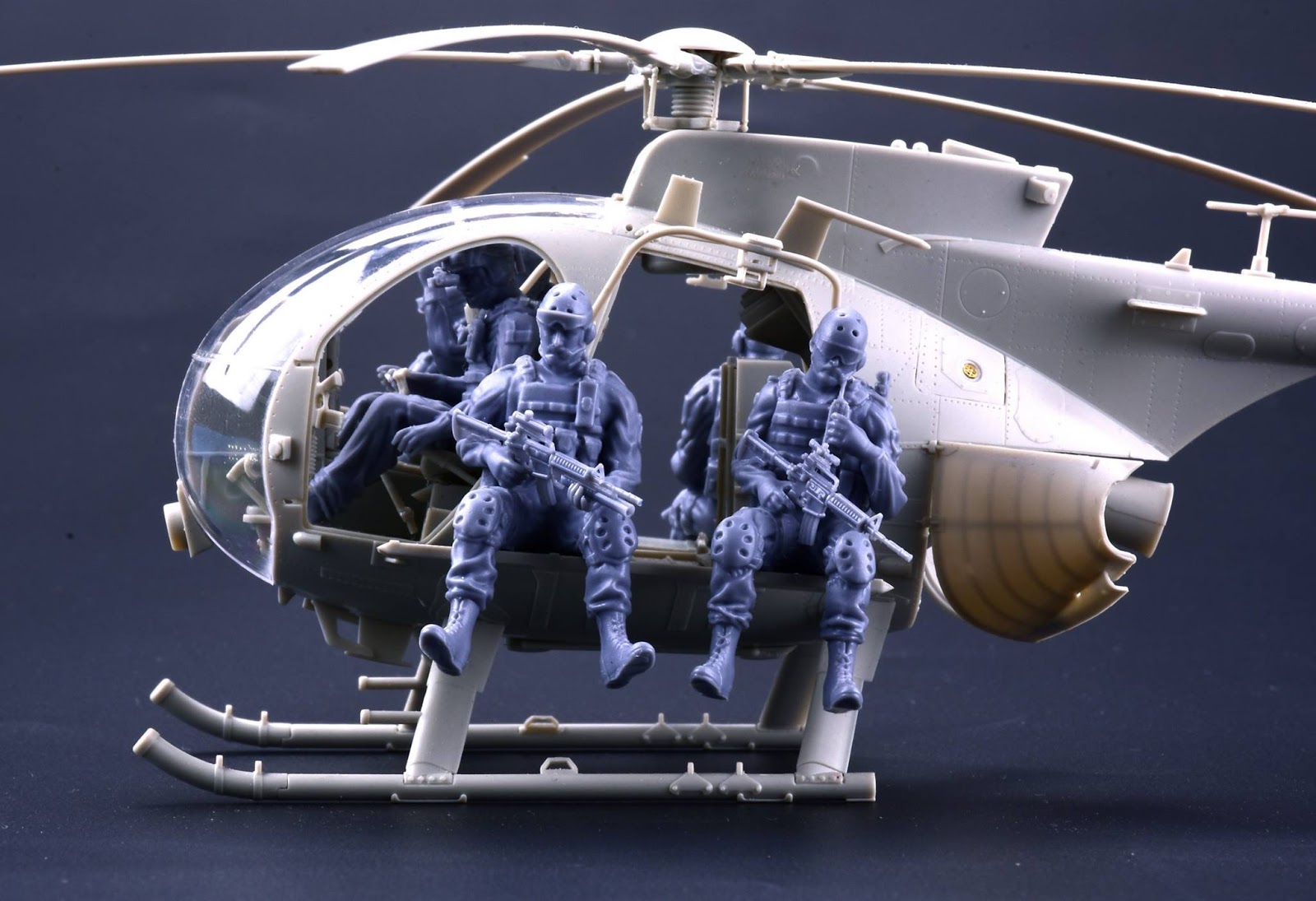 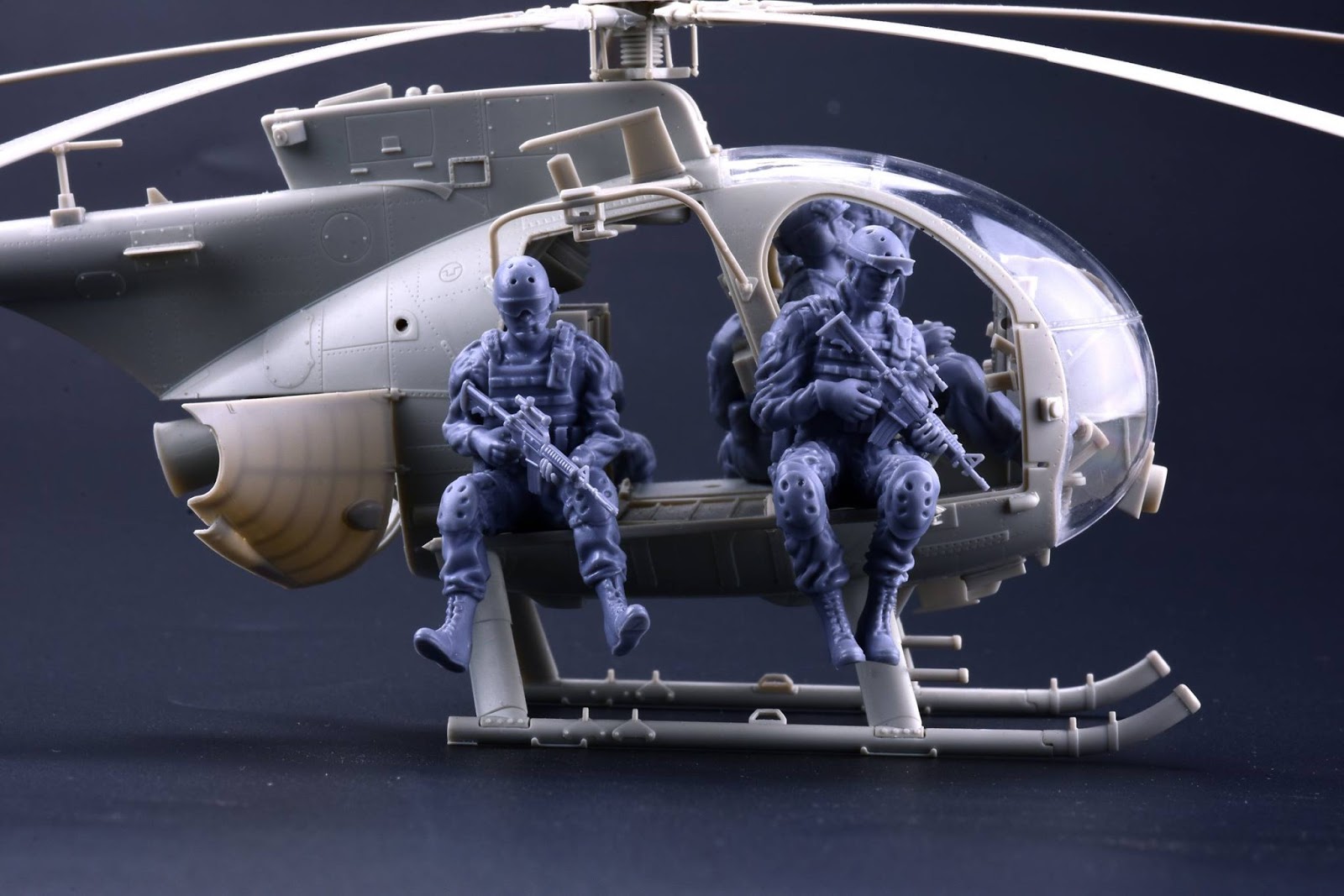 REPLY & QUOTE
FloydWerner (Floyd S. Werner, Jr.) said
ubisuck I enlarged the holes in B1 so that B15/16 fit into it and then B-17 just fits down the side.

ubisuck I enlarged the holes in B1 so that B15/16 fit into it and then B-17 just fits down the side.