Air Campaigns
Want to start or join a group build? This is where to start.
Hosted by Frederick Boucher, Michael Satin
OFFICIAL: The Night Shift Campaign

REPLY & QUOTE
rochaped (pedro rocha) said
Tom,
Looking forward to see your build. Like ive mentioned earlier, the Havoc family are great looking planes, and superb models have been made from that mould.

REPLY & QUOTE
md72 (Mark Doremus) said
OK, I'm at a difficult spot. Next up is wiring the engine. 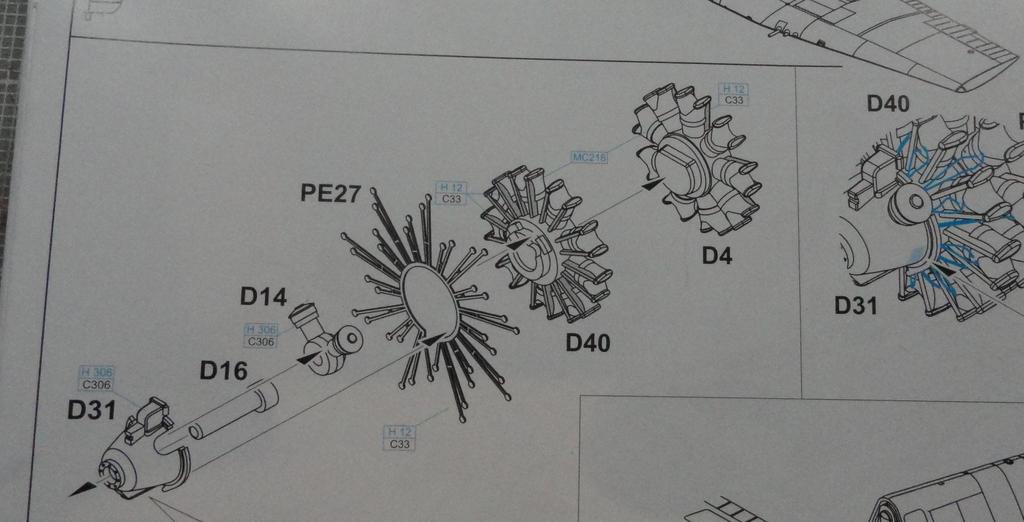 REPLY & QUOTE
c4willy (Chris Wilson) said
Hi Mark super glue and kicker is my recommendation. Glue the harness to the ignition manifold hit it with kicker then let it cure for an hour or so. Then glue each individual lead down with a drop of super glue followed by a drop of kicker when in the correct place working systematically around the engine. Or alternatively drilling holes and using copper wire as per my harness on the 1/32nd scale Zero.

REPLY & QUOTE
mrockhill (Mike Rockhill) said
The cockpit of my 1/72 F6f-5n is ready for paint now that Ive finished adding some details. My first step was to improve the pilot seat and bulkhead. In the seat I added a scap of .010 styrene sheet that is cutout to simulate the reinforcement across the lower back side. I also added a lever to the left side that I see in photos. I have no idea what it is or where it attaches but there it will go and should look the part. On the bulk head I rebuilt the "towel bar" with some stretch sprue and added some strips of Tamiya tape to simulate the harness ends going behind the seat. I also opened up the upright ends of the seatframe. Next I decided to tackle the left side console with all of its levers. I added some razor saw cuts to the throttle quadrant hoping to catch some of the dark wash to come later. Some touch ups to the area were naturally required. I then drilled for the levers using a #80 bit. For my levers I used stretched sprue that was glued into the holes, trimmed to length, bent into position and given a coat of tamiya extra thin to help them hold shape. To these I added blobs of micro kristal clear for the knobs and handles. A little tough to see here unpainted. My next stop was to detail the dasboard which should have a radar display of sorts. So using the Squadron in action book on the Hellcat I fabbed up this display using a piece of .040 rod a 1.1mm punched disc of .020 sheet and stretched sprue. I also took the opportunity to spruce up eduard's rubbish Mk.VIII gunsight. Instead of a semi shaped bit clear plastic theyve opted to give us a pillar of opaque grey to represent the combining glass and all(seen here on the unused alternate PE base dash piece). Using a razor saw and my trusty xacto I removed the glass portion leaving some side pieces to support a clear piece to be added later. and another link with more details here
Great stuff for those interested the operation of US WWII night fighting radar. So I learned I actually had built a display for an earlier AN/APS-4 radar and not the proper AN/APS-6 which looks much less conspicuous. So Eduard's treatment, by adding nothing more than an orange circle on the instrument decal, is pretty fair in this scale. Still I needed to correct mine and add the control boxes to the cockpit, built and wired with scrap bits of styrene. OCD commands it. Now for some paint, finally!!!

REPLY & QUOTE
"...Fat, drunk, and stupid is no way to go through life son"

REPLY & QUOTE
md72 (Mark Doremus) said
Mike, looks like the rod and cover in your first try is accurate for an F6F-3N. The F6F-5N used the flat screen you ended up with.

Of course, I put the post style on what turns out to be a -5N

Since I added the -3 rear window, I might get away with it...

REPLY & QUOTE
Pave-Hawk (iain) said
Finally made a start on my FW190s, the cockpits went together pretty quickly, just need paint before I attach the colour photetch parts.

REPLY & QUOTE
md72 (Mark Doremus) said
Thanks guys! I tackled the wiring job. A few days ago I superglued the wiring harness to the crankcase. 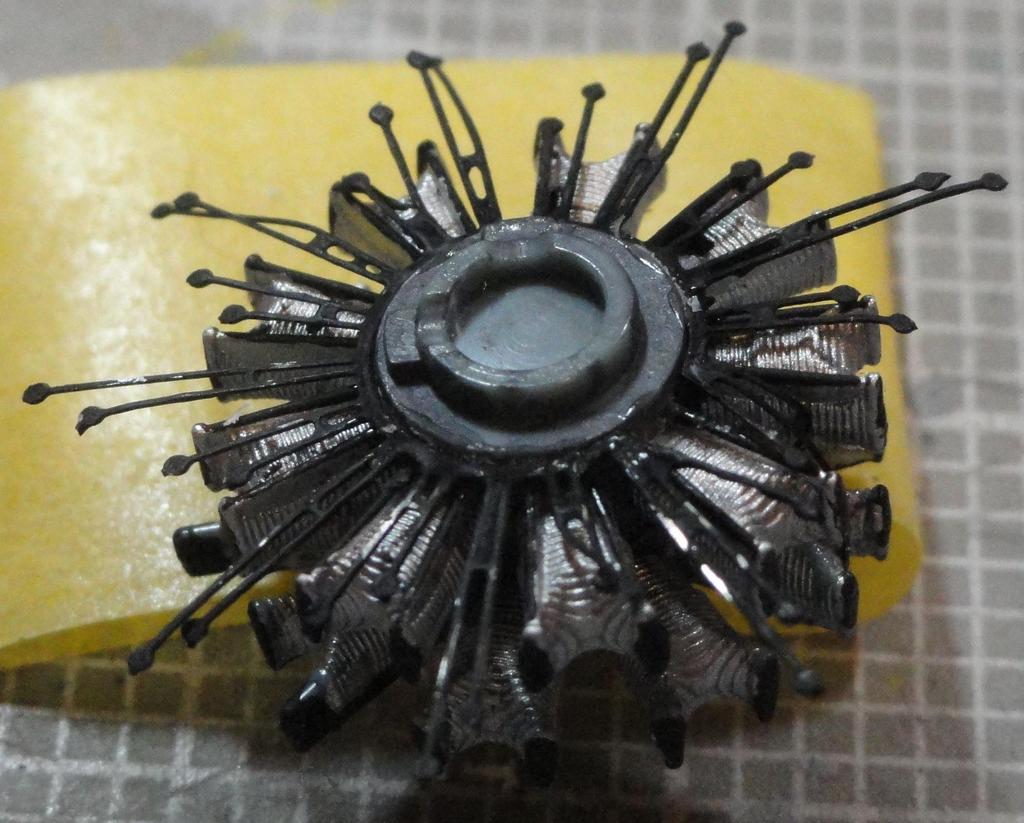 Finally screwed up the courage and dove in. Laid out a couple of puddles of Superglue and zip kicker. Bent each pair into place, applied the SG to the cylinder head, then pressed it home with a pencil lead dipped in the accelerator. 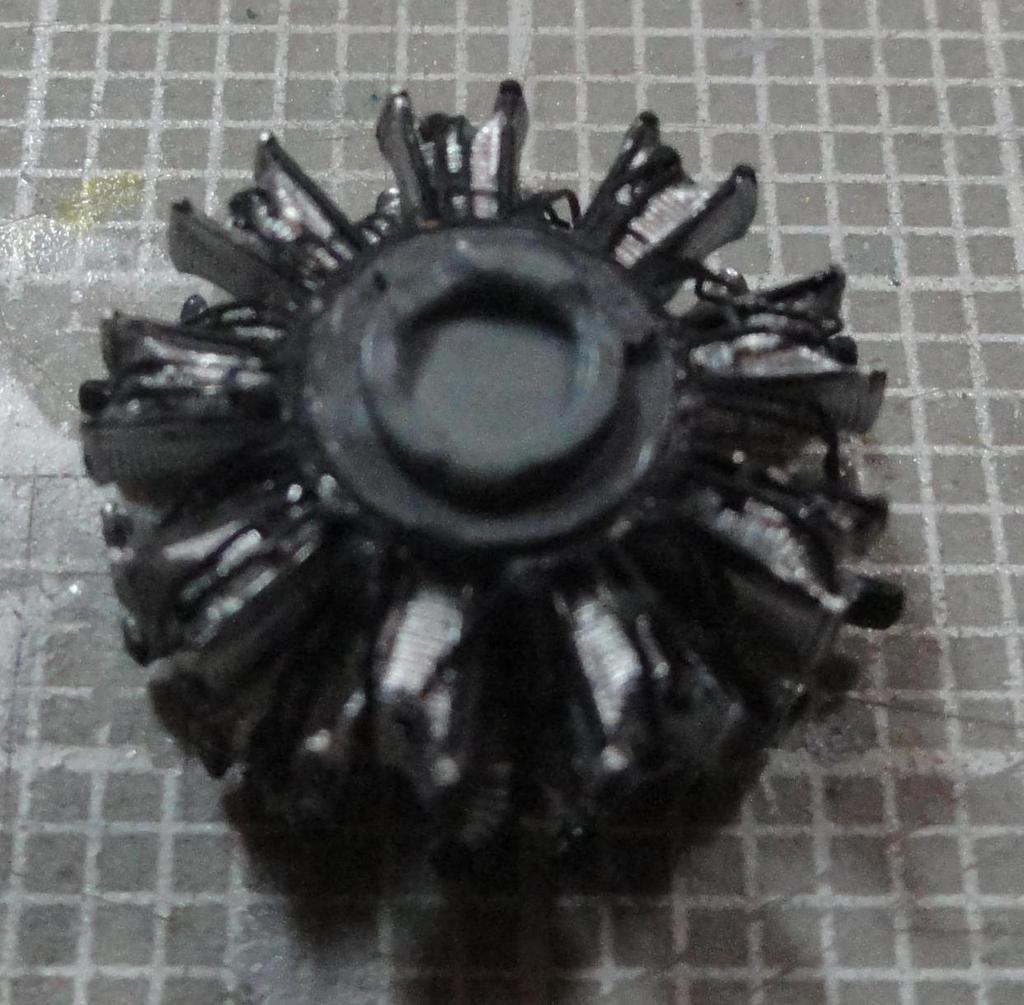 I guess now I can get back on track. 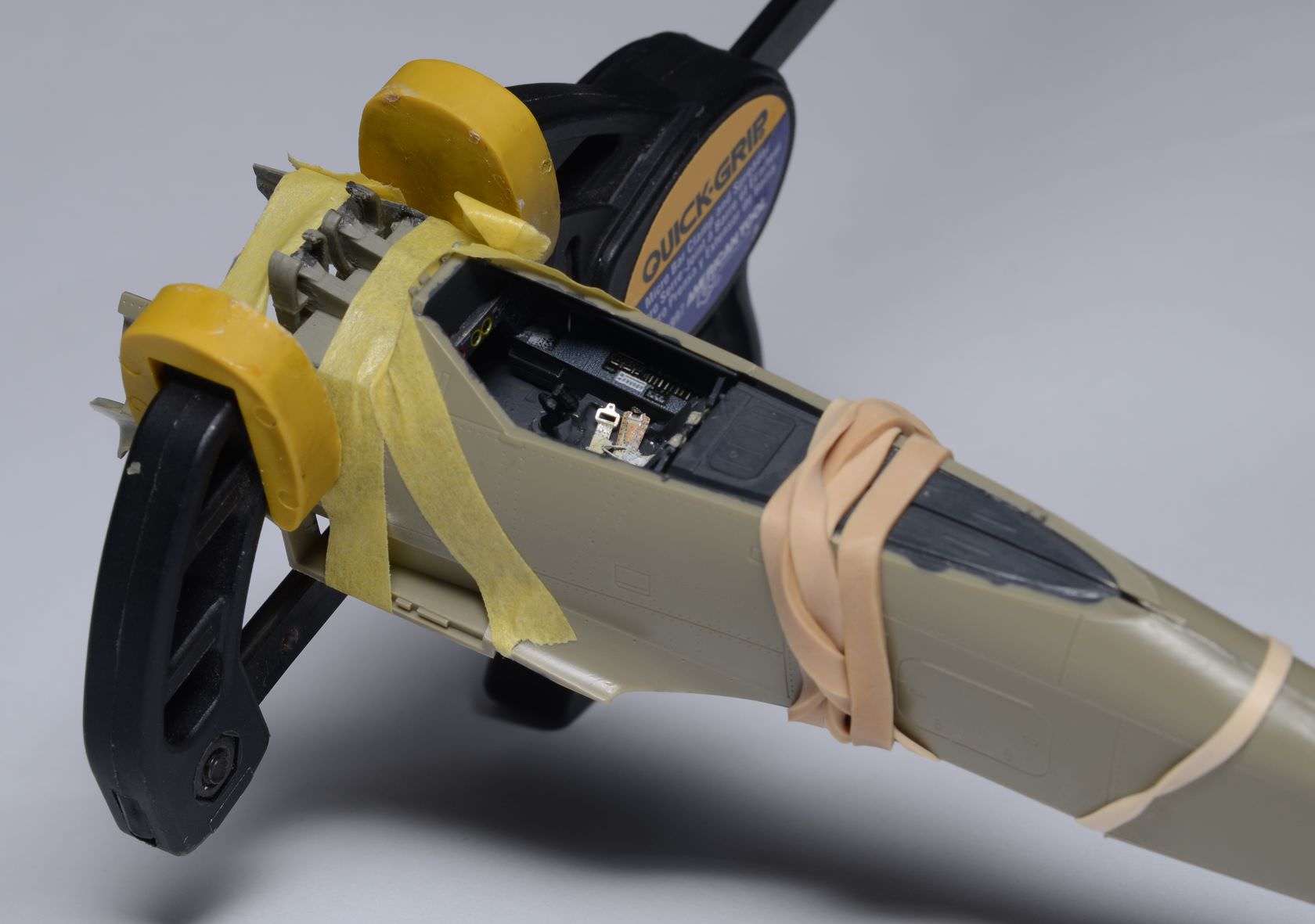 Now, a couple of days ago Mal posted a few photos of his work using his self-made masks and it was a joy to behold the sharpness and cleanlyness he achieves.

Today I managed to start on the Hinomarus and other insignias applied in the Gekko I'm building. It was fun alright, but the outcome had some unexpected side effects - Overspray! just like it happens on real size stenciling 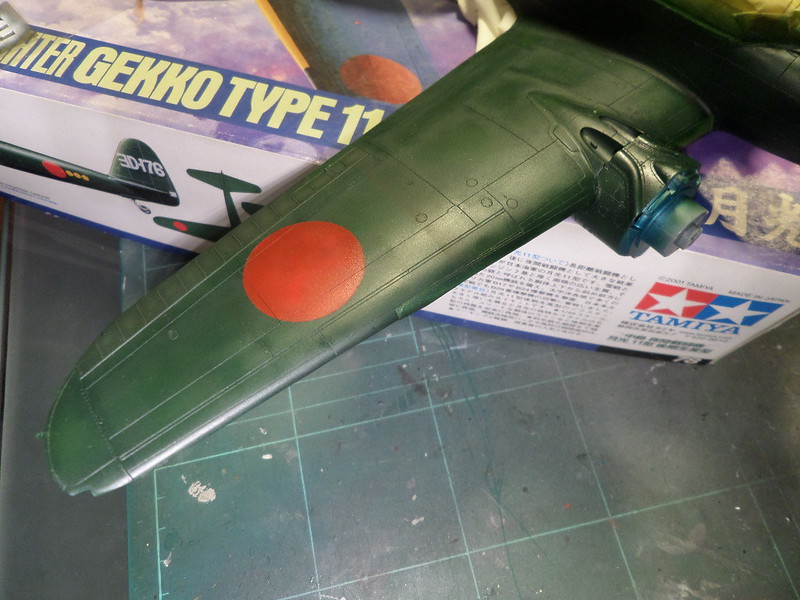 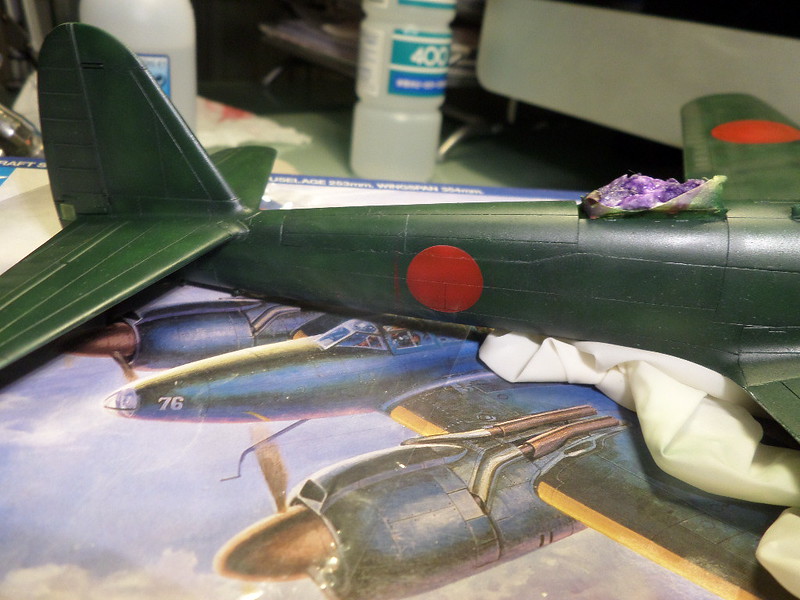 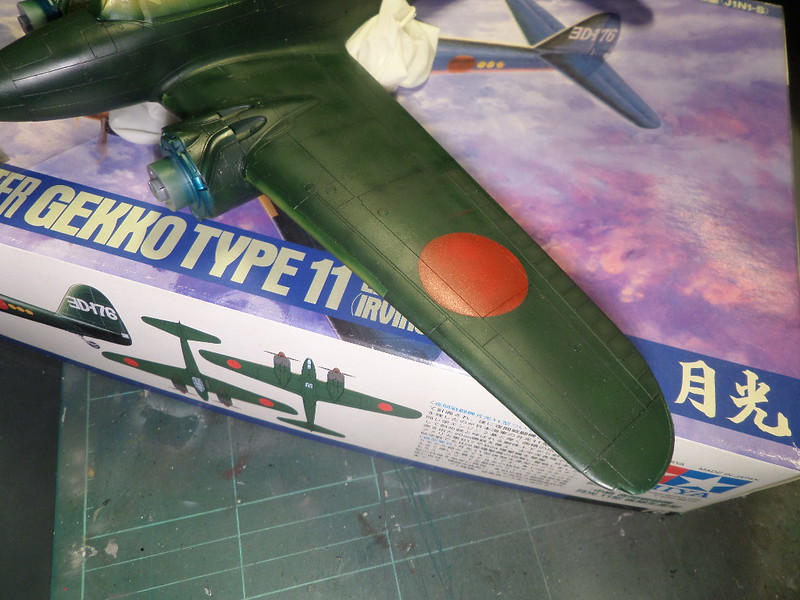 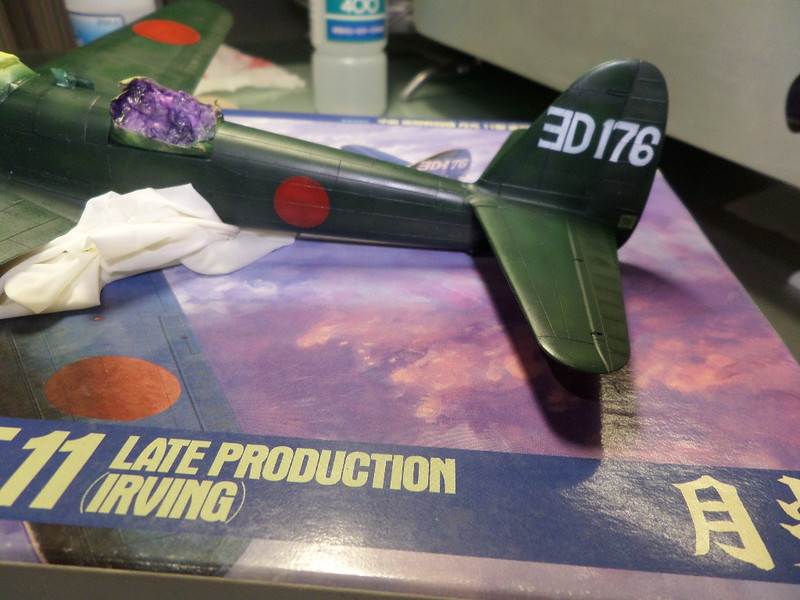 a minor nuisance, but yet another detour to go before the model gets completed. No bench work until next weekend

REPLY & QUOTE
b17-peter (Peter Mollenhauer) said
Hi mates,
just hopped on board of this campaign. Liked the first one a few years ago

, so I decided to join in.
Here's my entry

I tend to build the variant C or E

BTW, you guys have some beautiful models on your benches so far

Thats a hard choice to make my friend

The E option is unusual, as a matter of fact never saw it before.

Either option will be stunning

REPLY & QUOTE
mrockhill (Mike Rockhill) said
Cool kit Peter! I havent seen this jg 300 boxing from kora before! Its got all the schemes Id want to build too. I almost chose to build a jg 300 bf 109 myself using eaglecals for your marking option E but this kit would have me second guessing my choice the whole build.

REPLY & QUOTE
"...Fat, drunk, and stupid is no way to go through life son"

I bought that kit last autumn at the E-Day in Prague(CZ), was probably new then.
First plastic is cut and some minor parts and interior now painted

REPLY & QUOTE
Pave-Hawk (iain) said
Finally at paint, and have the bottom, and the first upper colour on. 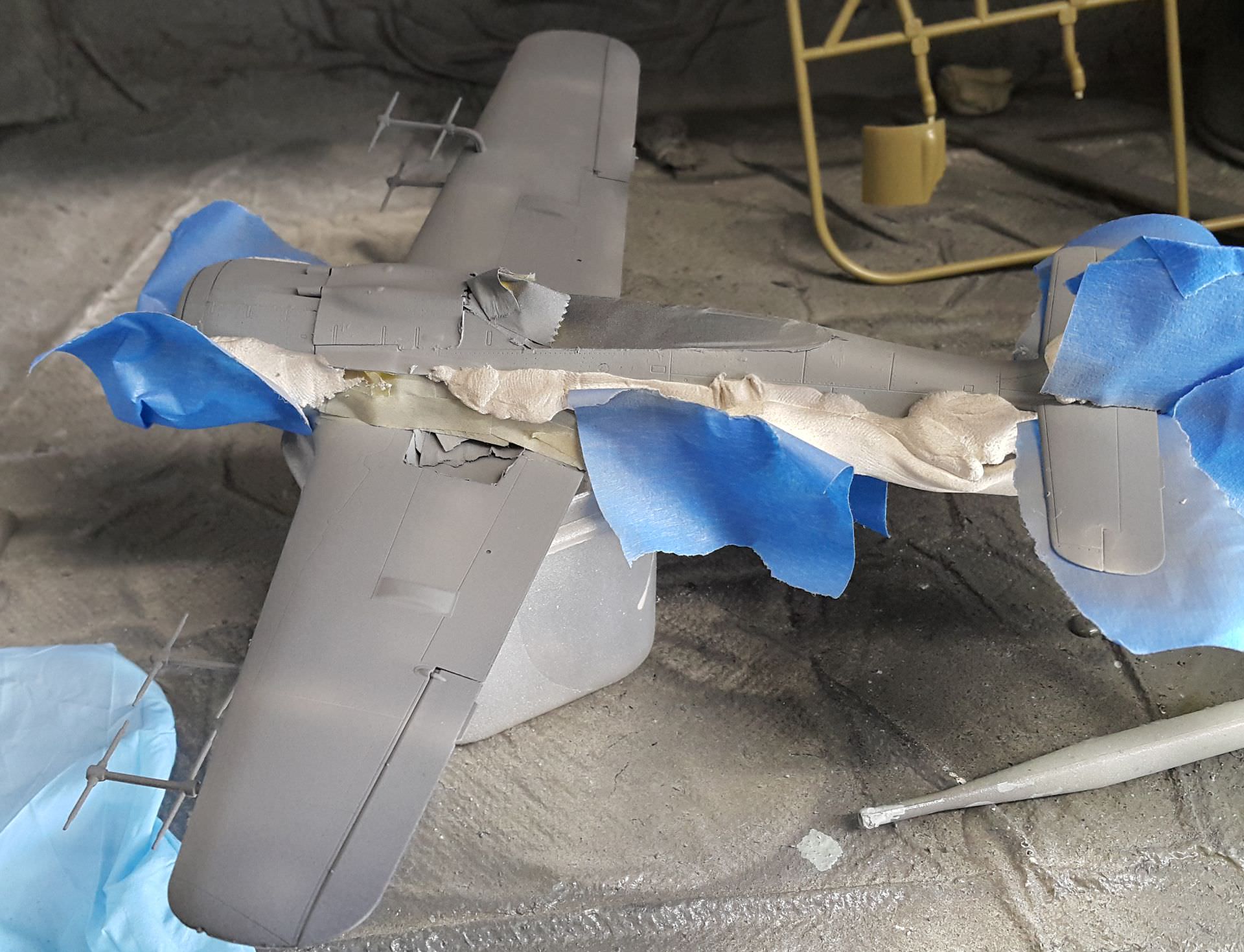 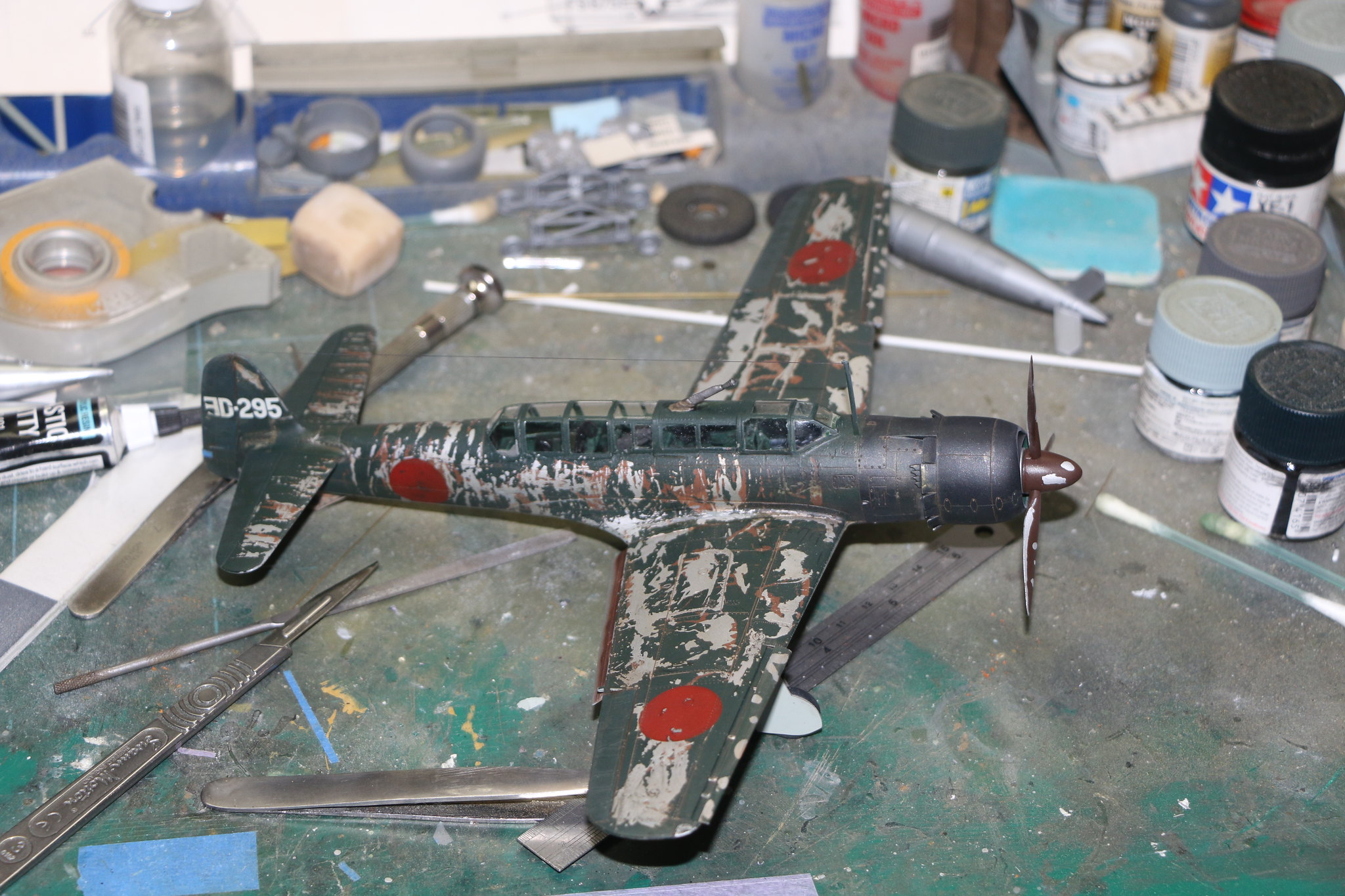 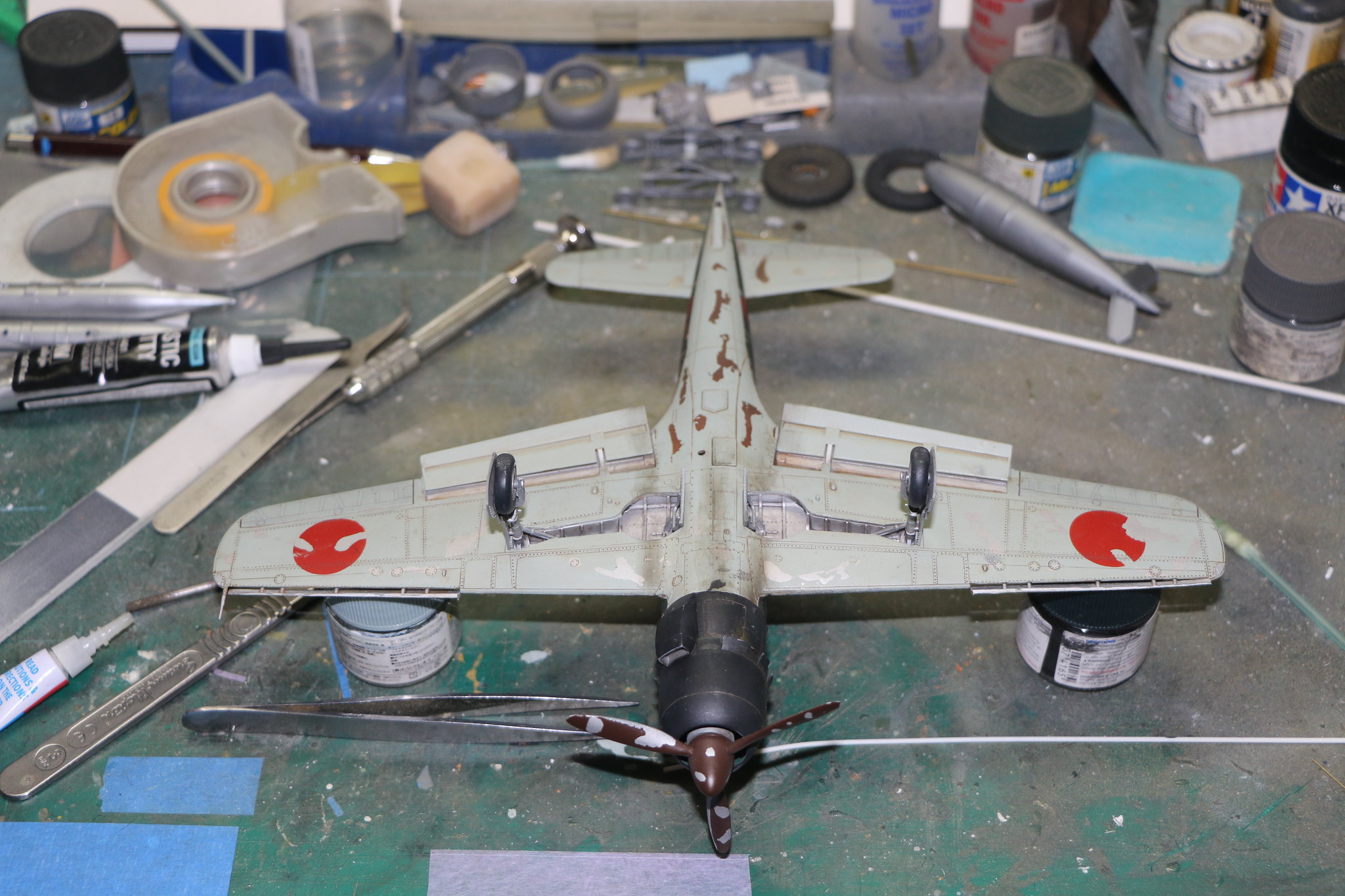 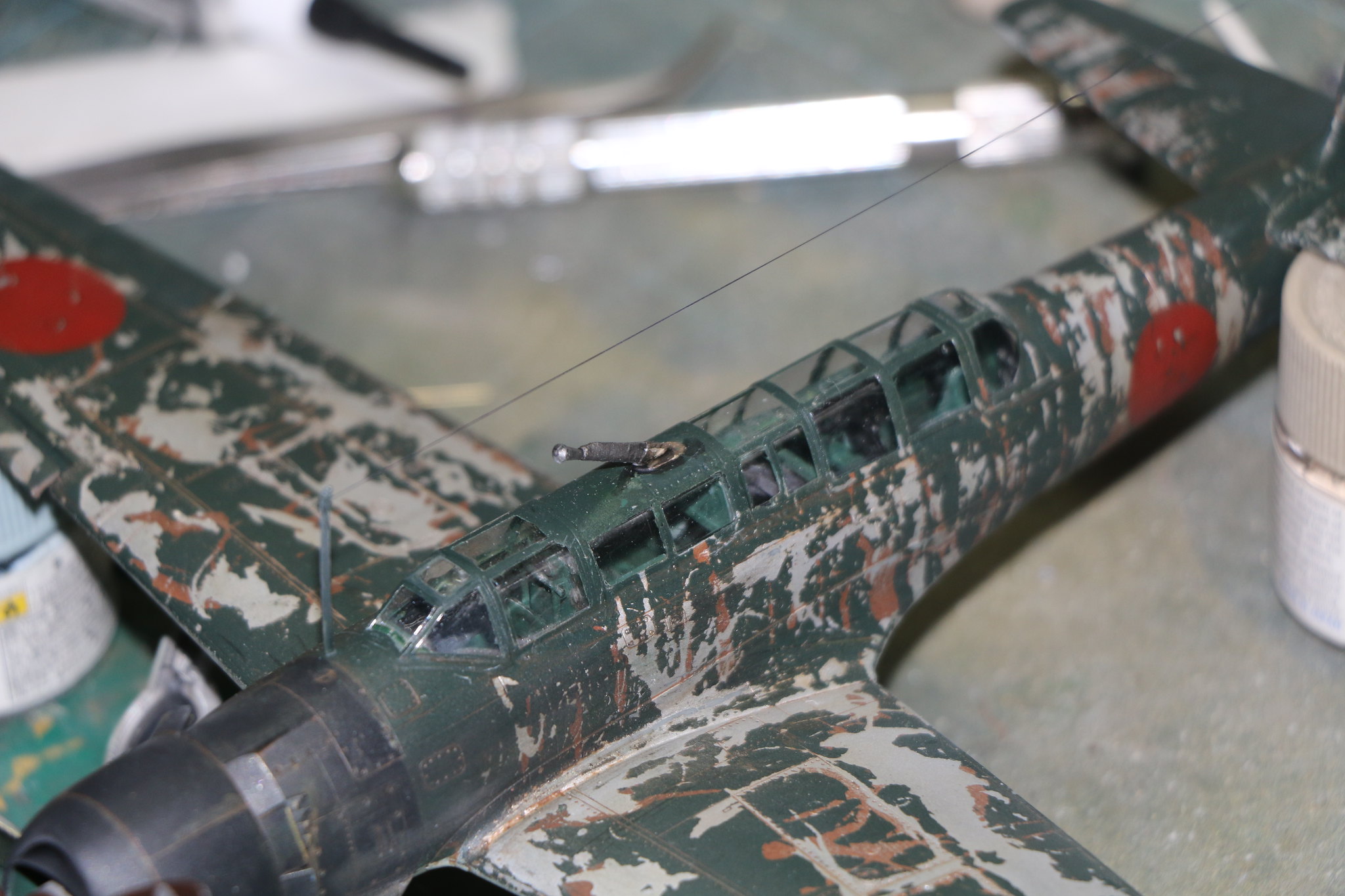 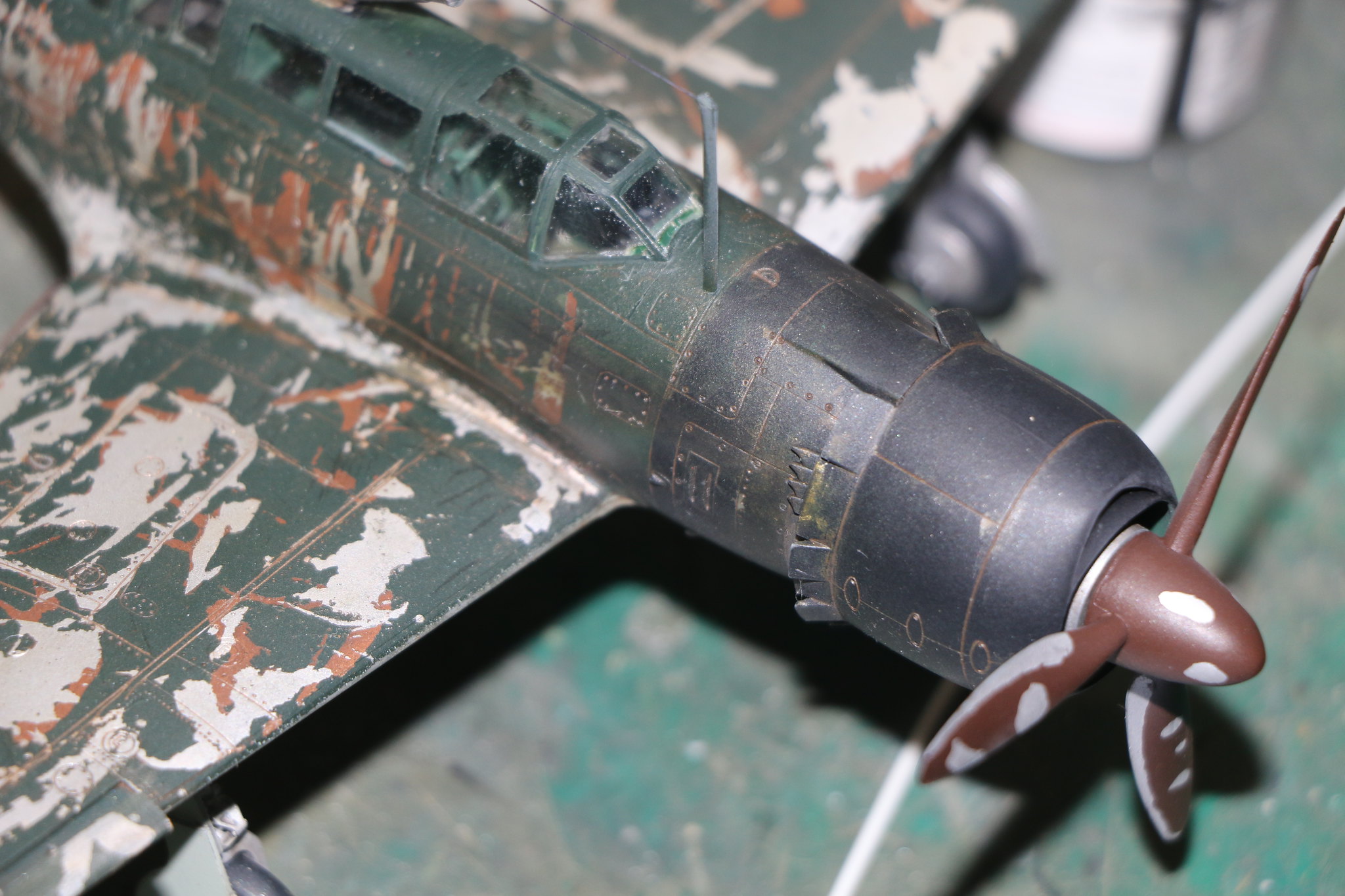 REPLY & QUOTE
PasiAhopelto (Pasi Ahopelto) said
Nice heavy weathering on the Saiun. Have to try something similar myself some day.

Meanwhile Mosquito is about painted. 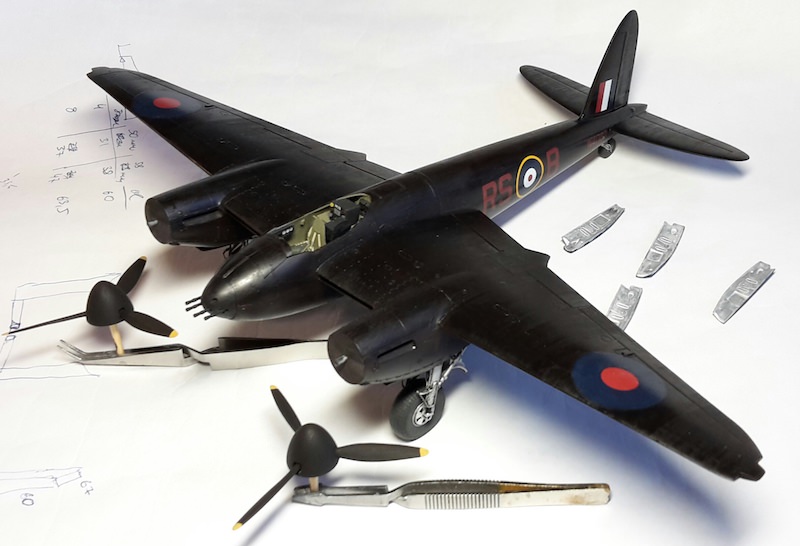 Have weather it still and apply flat finish. Also antennae and transparent parts are missing. I think this will be ready next weekend. And here some pictures of my actual modeling

Hope to start and finish painting the upcoming weekend

Most parts are glued...

REPLY & QUOTE
md72 (Mark Doremus) said
Good for you! I've got most of the glue up done, now I'm on sanding detail, next up paint!

and an additional picture is in the gallery.

Honestly, I'm not happy how the paint job turned out. It's too messy and tires look like plastic. Have to get more practise with really dark single colour subjects. The kit was quite nice, but decal seat belts would need to be replaced.

Anyway, it's done and it's my 2nd completed model in 2018. Last year did 7 and at least that many failed without getting completed, so looking better.

REPLY & QUOTE
b17-peter (Peter Mollenhauer) said
Congrats Pasi,
I like the overall look of your Mossie, it looks just the right amount of used. Maybe you can fix the tyres still?
Great job!